The Unpardonable Sin And Campus Crusade

The Unpardonable Sin And Campus Crusade

One is not and never ought to be surprised at being severely criticized for standing on the sure foundation of Reformed truth. But it is something else when, out of a clear blue sky, one who uncompromisingly takes such a stand is charged with committing no less than the unpardonable sin. By the March 15, 1970 issue of The Standard Bearer intelligence of this pitiful attack comes, revealing its source to be the March issue ofMissionary Monthly, which rarely, and not in this instance either, comes to our hands. Yet surprise is hardly the term to express reaction to such severe accusation. However, it is, indeed, something to take as a warning, if that were all that were involved, giving it very grave consideration, though called upon to do so by an opponent.

Only, we have received not merely a warning against this sin, but have been accused of actually committing it. Then that leaves us without hope of repentance, where warning is useless and condemnation the only thing left for such a criminal. Since it is most presumptuous to make such a charge outright without first warning a man against this evil, it will be well for our readers to consider that the warning of Scripture against this sin is directed to all without exception. It is addressed to you, to me and to all under the sound of the gospel. Therefore no one may reason that since the unpardonable sin cannot actually be committed by the elect, and since we are elect, regenerated people of God, that therefore the biblical warnings concerning the sin against the Holy Spirit have no bearing upon our lives, and so do not apply to us. That would not be humble faith, but wicked presumption. For “let him that thinketh he standeth take heed lest he fall” (I Cor. 10:12). Both the words of Jesus in regard to this sin in Matthew 12 and those of the Hebrews writer in his sixth chapter are directed to the church of God as warnings to believers. As elect, it is not possible that they, the elect, commit this sin. Yet from a purely human point of view, it is possible that any one may commit the sin against the Holy Spirit. That is why such gospel warnings are protested against all without exception who hear its denunciations. Why would God have such warnings made but as a means of deterring His elect from the sin which never has forgiveness! Hence, all do well seriously to take these warnings to heart.

Now Dr. Jerome De Jong says, as reported in the March 15 issue of The Standard Bearer, “I plead with all critics. Before you criticize a work of God (as, e.g., Campus Crusade, presumptuously and without confessional and scriptural proof so claimed to be—RCH) because of jealousy on your part or guilt please consider Matthew 12:31-32.” Here it is contended that the critic of the wildest Arminianism by such criticism sins against the Holy Spirit, and that he sins against the Spirit who is jealous of the grace his brother receives. In answer to this, especially to the latter statement, Calvin, in hisInstitutes, III, III, 22, readily comes to our defense.

“Others say, that a man sins against the Holy Ghost, who envies the grace bestowed on his brother. I know no foundation for this notion.”

No, nor do we know of any support for such a fancy. This is the way, in the same place, Calvin understands the unpardonable sin:

“I say, then, that the sin against the Holy Ghost is committed by those who, though they are so overpowered with the splendor of divine truth that they cannot pretend ignorance, nevertheless resist it with determined malice, merely for the sake of resisting it.”

Now wherein has this present writer resisted any divine truth? Let Dr. De Jong show such resistance. And where have we said that any of Campus Crusade have made unpardonable resistance to God’s truth? That by their unscriptural philosophizings, Campus Crusade offends the truth of God, we maintain. Also we maintain that this is done widely, on their part, and with a great deal of deep-seated ignorance of the teaching of Scripture. For it is difficult to find one more ignorant of true righteousness and/or the message of Holy Writ than a Campus Crusader. What is needed is massive doses of spiritual enlightenment and sound instruction in the tenets of the true Christian and Reformed religion. If they had the benefit of this enlightenment in Reformed truth, many of them would, I have no doubt, receive it in the love of it, and certainly would not hold it down in unrighteousness, as many are doing these days who claim to be Reformed. Hear Calvin further on this.

“Those who unadvisedly offend against the truth of God, which they know not, and who ignorantly revile Christ, but at the same time have such a disposition that they would not extinguish the divine truth if revealed to them or utter one injurious word against him whom they knew to be the Lord’s Christ,—they sin against the Father and the Son. Thus there are many, in the present day, who most inveterately execrate the doctrine of the gospel, which if they knew to be the evangelical doctrine, they would be ready to venerate with their whole heart.”

But these, you see, according to Calvin, though they sin, and that against the Father and the Son, do not commit the unpardonable sin against the Holy Spirit. Nor have we said or implied anything of the kind. Calvin goes on to state clearly exactly what that sin is.

“But those who are convinced in their conscience, that it is the Word of God which they reject and oppose, and yet continue in their opposition,—they are said to blaspheme against the Spirit, because they strive against the illumination which is the work of the Holy Spirit.”

This is that horrible unpardonable sin, which has no forgiveness, neither in this world nor in the world to come. But I know of no critic of Campus Crusade who has come any where near this sin. If anything, it is the false position of Campus Crusade, and the thinking of its apologists, which come dangerously close to that dreadful sin. For in their very obvious opposition to the Reformed truth, which we, in brief, call Calvinism, they do “strive against the illumination which is the work of the Holy Spirit,” especially as that work and illumination for centuries have been operative and evident in the church in what we call the Three Forms of Unity—the Heidelberg Catechism, the Belgic Confession and the Canons of Dordt with its Rejection of Errors,—and also as given in our Reformed liturgies, such as the Forms for the Administration of Baptism and the Lord’s Supper, the Forms for Ordination and .Solemnization of Marriage, etc. We refer to these standards, too, in their originals, not as having undergone modern deletions, omissions and changes. For this body of truth meets a great deal of resistance, attack and corrupting influence daily as it comes from both the Liberal and Arminian camp.

It certainly is to be granted, in the light of Calvin’s sagacious remarks, that as to this, it may be, hateful, opposition to the truth of God, which the true church through the ages has always stood, lived and died for, one may, as the Apostle Paul did, legitimately and excusably plead ignorance. Paul said, I “was before a blasphemer, and a persecutor, and injurious: but I obtained mercy, because I did it ignorantly in unbelief’ (I Tim. 1:13). Hear Calvin comment on Paul’s words.

“Paul appears to insinuate that there is no room for pardon, unless when ignorance can be pleaded in excuse. What then? Will God never pardon anyone who has sinned knowingly? I reply, we must observe the word ‘unbelief,’ for this term limits Paul’s statement to the first table of the Law. Transgressions of the second table, although they are voluntary, are forgiven; but he who knowingly and willfully breaks the first table sins against the Holy Spirit, because he is in direct opposition to God. He does not err through weakness, but by rushing wickedly against God, gives a sure proof of his reprobation.”

Sin against the Holy Spirit is then open defiance of God and His truth, especially as that truth has been deposited in the church and held in its pure and scriptural expressions as to what Scripture teaches. It is flagrant transgression of the first table of the law. Worse yet, it is malicious rejection of the truth. For when one has not gone that far in opposition to the truth, the Holy Spirit has not been resisted. The opposing of the truth with malicious intent is here contrasted with a sinful ignorance, which clearly exposes the point of difference.

The former Standard Bearer articles written in unrefuted criticism of Campus Crusade had considerable to say of the true doctrine and work of the Holy Spirit. Will any defender of this movement prove that these articles as presented or developed are in any way wrong, or in conflict with the Scriptures and the Reformed Confessions? Will they also, please, show that Campus Crusade and its philosophical (really unphilosophical) clichés, its tenets, if you prefer, do harmonize with Reformed truth? Until this is done, the accusation of having committed the unpardonable sin is at the least ridiculous, and at the most, flagitious, to use a favorite word of Calvin’s.

Let all guard against fighting against the truth of God, though it be in ignorance. For to do so is to come perilously close to sin against the Holy Spirit. Campus Crusade claims to work in harmony with and for the church, not against the church. If this be so, then the movement will bear marks similar to the marks of the true church, as namely to hold the perfect doctrine of salvation outlined in the great Reformed Confessions. Yet we are inclined to believe that the majority of the modern religious movements are established in the first place as a result of departure from the Reformed standards and the faith of the Reformers. For their whole position and ministry is terribly unreformed. The onus and responsibility of speaking according to this Word and the teaching of the Spirit in the Church of the ages is upon them. Many of them, if they have not already sinned against the light and illumination of the Spirit, are but a hair’s breadth from doing so. Calvin (Institutes, III, III, 24) warns that they who do so

“are stricken with eternal blindness by the righteous judgment of God, on account of their ingratitude.”

If that happens, it will be impossible for these people to repent. We shudder to think how we were once in Arminian ignorance and darkness, hence so close to Modernism. For this reason we are ineffably grateful to Almighty God for the light of His truth which He has beamed into our hearts, filling us with the knowledge and the love of the truth. But they who stand not squarely in line with the reformed religion freed most the warning herein given against the unpardonable sin. 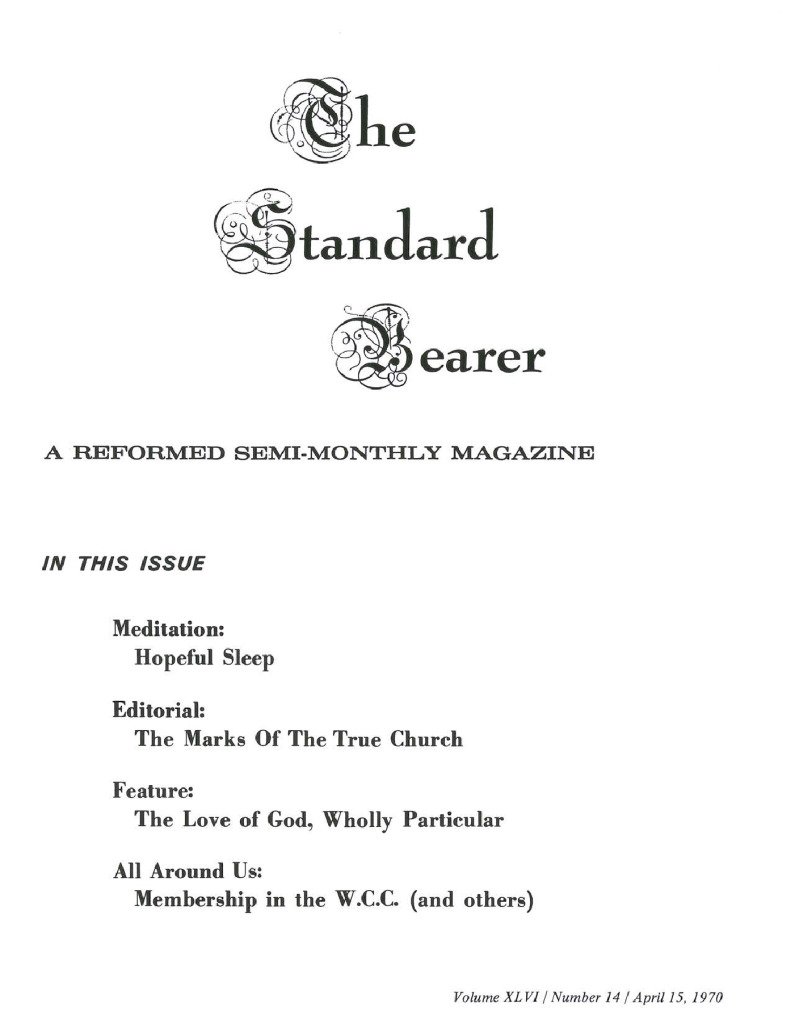