The Two Natures of Christ: The Union of the Human and Divine Natures

In referring to the centrality of Christ’s human nature, we mean that He was not born at random out of the human race, but according to the purpose of God, ,at the very center of humanity, that is, out of the Jewish nation, the covenant people of God, and the church of the Old Testament. The centrality of Christ’s human nature, therefore, is connected with the fact that the Jews, at least in Old Testament times, stood at the center of history from the viewpoint of God’s purpose and work (cf. Deut. 4:7, Deut. 7:6).

Among other things, this means that Christ Himself was a Jew as far as His race and appearance were concerned. Those pictures, therefore, which present Him with blond hair and nordic features are not correct and neglect this truth, apart, of course, from the fact that all pictures of Christ are a violation of the second commandment. That Christ had a central human nature also means that Christ was Mary’s own flesh and blood, as the angel promised Mary He would be in Luke 1:31, and again in Luke 1:35.

The Belgic Confession mentions this aspect of Christ’s humanity in its article on the incarnation:

Therefore we confess . . . that Christ is become a partaker of the flesh and blood of the children; that he is a fruit of the loins of David after the flesh; made of the seed of David according to the flesh; a fruit of the womb of the virgin Mary, made of a woman, a branch of David; a shoot of the root of Jesse; sprung from the tribe of Judah; descended from the Jews according to the flesh; of the seed of Abraham (Article XVIII).

Matthew’s genealogy also points, however, to the significance of the truth that Christ has a central human nature. The genealogy is not given merely to prove the bare fact of Christ’s descent from Abraham, obviously, but the very arrangement of the genealogy shows that Christ, as the seed of Abraham and David, is also the fulfillment of the covenants made with them. In other words, the centrality of Christ’s human nature is seen here to be basic to all covenant theology.

This is true first of all in regard to the unity of the covenant, i.e., that there is only one covenant of God with His people. That Christ is born the seed of the woman, the seed of Abraham, and the seed of David in fulfillment of the promises made to each of these Old Testament people, shows that these promises, which are the covenant promises, are essentially one promise and that the covenant to which they belong is also one covenant in Christ.

The unity of the covenant in the Old and New Testament also is connected with the centrality of Christ’s human nature. Our unity with Christ, in other words, is our unity with the whole Old Testament, if He is truly the flesh and blood of Abraham and David through Mary, and if we are truly flesh of His flesh and bone of His bone. There is indeed, then, a real organic connection between God’s Old and New Testament peoples in Christ, a connection which is basic to the unity of the covenant in both dispensations. This is, of course, denied by all Baptists in support of their practice of adult baptism. If the sign of the covenant is differently administered in the New and Old Testaments (to children in the O.T. and to adults in the N.T.) then the covenants represented and sealed by baptism and circumcision must be different covenants, the only explanation of which is to be found in the teaching that there are two different peoples of God (Israel in the O.T. and the Church in the N.T.).

Now, at the time of the Reformation, the Anabaptists actually did deny that Christ was the flesh and blood of Mary. Men like Melchior Hoffman and Menno Simons taught that Christ’s human nature was specially created in the womb of the virgin Mary and that He was not really her flesh and blood. Mary’s womb was only a kind of receptacle, therefore, for Christ before His birth, and she (to use a modern analogy) was only a kind of surrogate mother to Christ. In fact, some of the Anabaptists tended to deny the reality of Christ’s humanity altogether. Their error is pointed out in Article XVIII of the Belgic Confession.

This view of the Anabaptists was, in part, an attempt to preserve the sinlessness of Christ, and to that extent commendable. However, the Anabaptists went astray at this point because of an incipient gnosticism in their system of teaching. They believed and to some extent still believe today in the inherent evil of the material world. This was evident in Reformation times in their refusal to hold public office, to recognize the authority of the magistrates, and in their attempts to maintain a pure church (Donatism), and in their practice of world-flight, still seen today among Anabaptist groups such as the Amish and Mennonites. It is also seen today in much of Fundamentalism (which is largely baptistic) in the separation that is made, at least practically, between religion and everyday life, especially in matters political. It was, however, also connected with their teaching concerning baptism.

Now insofar as this error is not explicitly taught anymore in Baptist circles, it would seem that it is not an integral part of their theology, but only a temporary aberration (cf. L. Verduin, The Reformers and their Stepchildren, p. 253). But Berkhouwer (The Person of Christ, pp. 198ff) and others insist, as does the Belgic Confession by implication in Article XVIII, that it is indeed implicit in all Baptist theology.

The connection is this: in denying infant baptism, the Baptist is forced to deny any real connection between Christ as the Head of the New Testament Church and God’s Old Testament people and covenant. This led in Anabaptism to a denial of the centrality of Christ’s human nature, i.e., to a denial of the fact that He was born Mary’s flesh and blood. Thus, according to Anabaptist teaching there was, indeed, no real connection between Christ and God’s Old Testament people through Mary. And even today in dispensation circles, Christ is not spoken of as the Head of Israel, which implies some kind of organic relationship and connection, but only as Israel’s King (a purely formal relationship). There is indeed, therefore, an implicit denial of the centrality of Christ’s human nature in Baptist theology.

The centrality of Christ’s human nature has been explicitly denied in Reformed circles also, notably by Dr. Abraham Kuyper. He taught that Christ did not assume an individual human nature, but human nature is general, i.e., human nature as it is common to all men. He says, for example:

To be sure, Scripture teaches everywhere that Christ was a man, that He bore the human nature, but that He was an individual, that amoung the variations of the seed of Adam there was also the variation Jesus is absurd (Dictaten Dogmatiek, Locus de Christo, 33, quoted from H. Hoeksema, Reformed Dogmatics, pp. 354, 355).

Since, as Kuyper himself admits, a general human nature is an abstraction, it ought to be immediately evident that this is really a denial of the reality of Christ’s human nature, first of all. But even apart from that, it falls into the same error into which Baptist theology falls, that is, the error of cutting the organic connection between Christ and His people, especially the Church of the Old Testament. Thus, though the error itself seems to have died with Kuyper in Reformed circles, and though it is no longer explicitly taught in Baptist circles, these errors do serve to show how closely the doctrine of the two natures of Christ, especially a correct understanding of His humanity, is tied to the Biblical doctrine of the covenant. To this matter we shall return. Let us note at this point, however, this additional truth,. that insofar as Christ has a central human nature and is born in the family of Abraham and David, He is also the living proof of the great promise of the covenant, that God will continue that covenant in the line of generations. In fulfillment of that promise, God continued His covenant of grace from Adam, through Abraham and David to Christ Himself, and so Christ is the surety of that great promise of the covenant as it was given to these Old Testament people of God. And what is more, He is still the surety of that promise as it is given to us in the New Testament, as in Acts 2:39. He would not be this if He was not the flesh and blood of the virgin Mary, the seed of Abraham, and the fruit of the loins of David. That He is means that we can still sing the words of Psalm 89 with hope:

For Him my mercy shall endure,

My covenant made with Him is sure,

His throne and race I will maintain

Forever, while the heavens remain 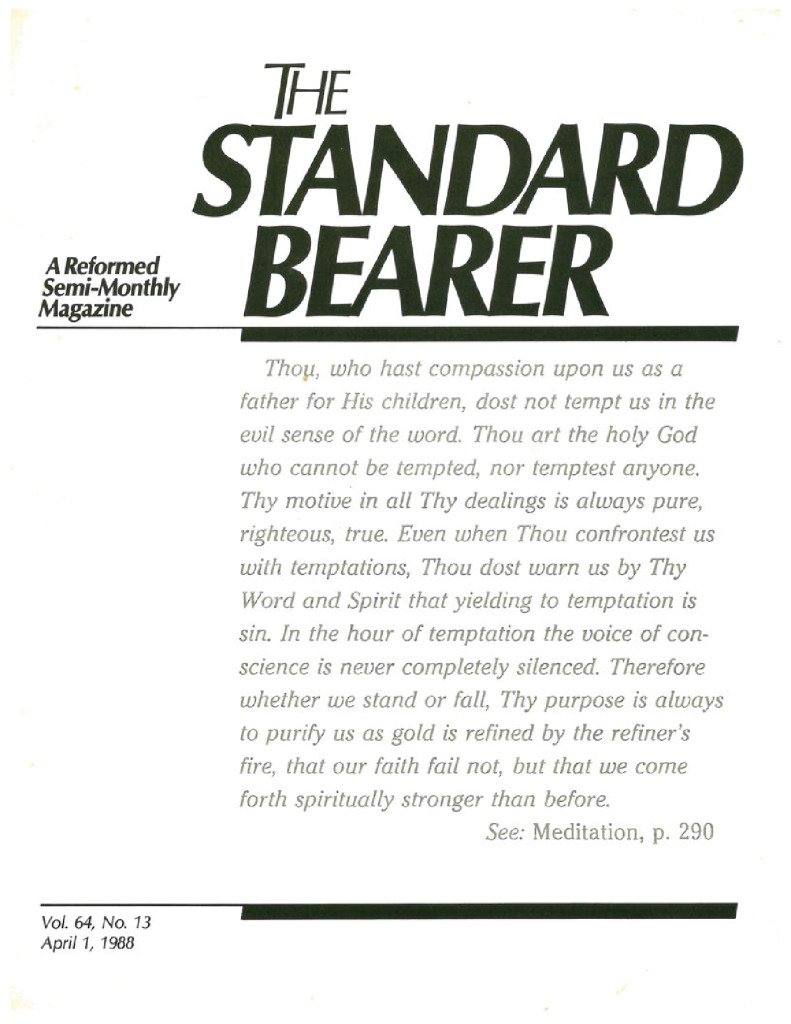