The Two Natures of Christ—The Humanity of Christ

b. Christ’s complete human nature. Closely connected with the reality of Christ’s human nature is its completeness. It should be immediately obvious that if His human nature is not complete, that is, if it does not include body, soul, spirit, heart, mind, will, and all that belongs to our humanity, then it is not real either.

This also was denied in the early history of the Church, first of all by those who taught that the deity of Christ replaced a certain part of the human nature. An example is the error of Appolinarianism (named after the man who first taught this error, Appolinaris, Bishop of Laodicea in Syria). He taught that Christ did not have a human “mind” but that this had been replaced by the divine nature. Boettner uses the analogy of a human mind in a lion’s body to explain what Appolinaris taught concerning Christ (Studies in Theology, p. 263). Such an idea may seem very strange to us, but we must remember that such errors arose in connection with the Church’s attempt to defend what is still today a great mystery: that Christ can be at the same both really human and really divine, and yet only one Christ. In fact, the historical evidence seems to indicate that Appolinaris did not deliberately teach heresy at this point, but was attempting to hold to the truth that there is but one Christ, without in any way compromising the truth that He is really and truly God.

Another error, somewhat similar to that of Appolinaris, was the teaching that Christ had only one will (Monothelitism), in effect a denial of the completeness of Christ’s humanity, an error to which Roman Catholicism still tends today.

The Church recognized immediately that these were errors and saw, too, that these errors were not insignificant, but did serious damage to the gospel. Just as the reality of our salvation depends on the reality of Christ’s human nature and on the reality of His suffering and death in that human nature, so the completeness of our salvation depends on the completeness of Christ’s human nature. Our whole being has come under the domination of sin and is enslaved in spiritual blindness and darkness. Not only our bodies are subject to sin and death, but also our souls (Is. 3:9), our spirits (II Cor. 7:1), our minds (Eph. 2:1-3), our wills (I Pet. 4:3), and our hearts (Jer. 17:9). Thus we are totally depraved not only in the sense that we are completely wicked, but in the sense that our whole being and existence is wicked and depraved. So it was necessary that Christ took upon Himself all our humanity and suffered in all that belongs to our human nature, not only in body, but also in soul and spirit, psychologically, emotionally, and spiritually (cf.Luke 22:44, John 11:33), that we might be fully delivered from this horrible slavery.

Gregory Nazianzen, one of the opponents of Appolinaris, saw all of this most clearly:

If anyone has put his trust in Him as a Man without a human mind, he is really bereft of mind, and quite unworthy of salvation. For that which He has not assumed He has not healed; but that which is united to His God-head is also saved. If only half Adam fell, then that which Christ assumes and saves may be half also; but if the whole of his nature fell, it must be united to the whole nature of Him that was begotten, and so be saved as a whole. Let them not, then, begrudge us our complete salvation, or clothe the Saviour only with bones and nerves and the portraiture of humanity (Letter to Cledonius)

Likewise, the Heidelberg Catechism hints at this truth when it says in Lord’s Day XV, 37 that He “sustainedin body and soul the wrath of God against the sins of all mankind, that so . . . He might redeem our body and soul from everlasting damnation.”

To this it should be added that we do not only believe that Christ suffered and was tempted at all points like we are (Heb. 4:15), but that He also served God with heart and soul and mind and strength (of physical body), that is, with His whole human nature, for that also was necessary for our salvation. It was not only necessary for our salvation that He suffer in every respect the punishment of our transgressions, but that He offer to God on our behalf a completeobedience as a substitute for our disobedience, thus justifying us before God.

Hebrews 2:17 would not be true, then, if He lacked any part of our humanity. He would not be made like us in all things, and would not, in that case, be able to be a merciful High Priest and to make reconciliation for our sins.

The strange thing that we see today is a neglect of this truth by those who emphasize even at the expense of His deity, His likeness to us. The prevailing emphasis on His sympathetic and complete humanity entirely misses the point, by missing the significance of this truth. In the preaching for example, the complete humanity of Christ is stressed merely to awaken some kind of emotional response, not to show our dreadful condition and the need of His complete humanity to assure us of deliverance. In other words, a man might point to Christ’s agony of soul in the garden (Matt. 26:38) and describe at length the horror of Christ’s suffering, showing how it is like our own suffering and arousing our deepest feelings, without ever mentioning the fact that this soul suffering of the Savior was part of the price of the redemption of our souls, and thus miss the gospel in the passage.

Here again, therefore, the Church must fight for the truth concerning Christ even at those points where superficially it would seem there is no battle to fight.

c. Christ’s weakened human nature. That Christ had a weakened human nature is also part of the truth that He was like us in all things. In speaking of the reality and completeness of His human nature, the emphasis has been on the likeness to us, that He was made like us in all things. Now the emphasis is on the truth that He was made like us, that is, like us in our fallen condition, under the curse of God, subject to death and hell, and suffering all the consequences of sin, or as Paul says in Romans, “In the likeness of sinful flesh” (Rom. 8:3).

This does not mean that Christ Himself was sinful or even liable to sin, but that He suffered in the flesh all the results of 4,000 years of sin’s debilitating power. He was not like we shall be in the new heavens and earth: incorruptible, immortal, with endless strength and life; not even like Adam in his perfection in Eden, but subject to poverty, weariness, hunger, pain, sickness, grief, and death. All of these things, we must remember, are the results of sin; and when Paul refers to sinful flesh, therefore, he is talking about our flesh as it had then reaped the consequences of sin for nearly 4,000 years.

II Corinthians 8:9 also refers to this truth when it says that He “became poor” for our sakes. This passage does not and cannot apply only to the physical poverty into which He was born (Luke 2:7) and which attended Him all His life (Matt. 8:20), but to the fact that He entered our low estate. Not only was the glory of His divinity obscured, but as a man He had no glory and honor, no comeliness or beauty (Is. 53:2). Philippians 2:7 says that He “emptied Himself” (KJV: “made Himself of no reputation”), and we must not forget that even apart from all the reproach and grief He had to endure, the essence of His poverty lay simply in this, that He became like us.

Perhaps this does not seem of such great importance. Certainly it seems as though Christians give it little thought, for not only do the various manger scenes one sees at Christmas show little of this, but it has been very much forgotten in the song so often sung by our children at Christmas time, “Away in a Manger.” The line of that hymn, “The little Lord Jesus, no crying He makes,” is an outright denial of the truth that He was like us also in our weaknesses and sorrows. Certainly, in hunger, discomfort, and fright, He must have cried as a babe, just as He also cried during His earthly ministry as a grown man.

Nor may we say that this is all of little account, for here also our salvation depends on Him. All these weaknesses and limitations are part of His humiliation, and therefore also part of our salvation. Paul says in II Corinthians 8:9 that all this is the grace of our Lord Jesus Christ, and the way in which we become rich in Him. To understand, we must know that all of the pain and suffering we endure, and which He took, are not just the results of sin in the sense that they came along with it, but the results of sin in this sense, that they are part of the punishment of sin. God will not give joy, peace, comfort, and satisfaction to those who walk in their own ways apart from Him, for there is no peace or life apart from Him.

And so we see that in taking all these weaknesses upon Himself, Christ was taking upon Himself the judgment due to us; that He might deliver us from it. That is the grace of His poverty.

How often that is forgotten by those who teach today that the only consequence of Christ’s poverty is a pity for the poor and deprived of this world, both on the part of Christ and on the part of His church that manifests itself in various kinds relief efforts and welfare programs! That is not only a denial of the reality of His poverty and all it means, but a failure to find in it any real help, comfort, or relief. In otherwords, the comfort of His suffering, poverty, shame, and humiliation, is in His suffering for sin and as the result of sin. Thus, and thus only, is He able to succor us in our temptations (Heb. 2:18).

The irony of it all is once again that it is exactly those who speak most often of the poverty and humiliation of Christ who are the greatest enemies of the truth of His humanity. The threat to the truth, therefore, is that the church should fail to see that His poverty is “the curse due to us,” which He took, that He might enrich us with all of the blessings that are in heavenly places in Him. Let the church, therefore, be careful when she confesses that Jesus Christ came in the form of a servant. 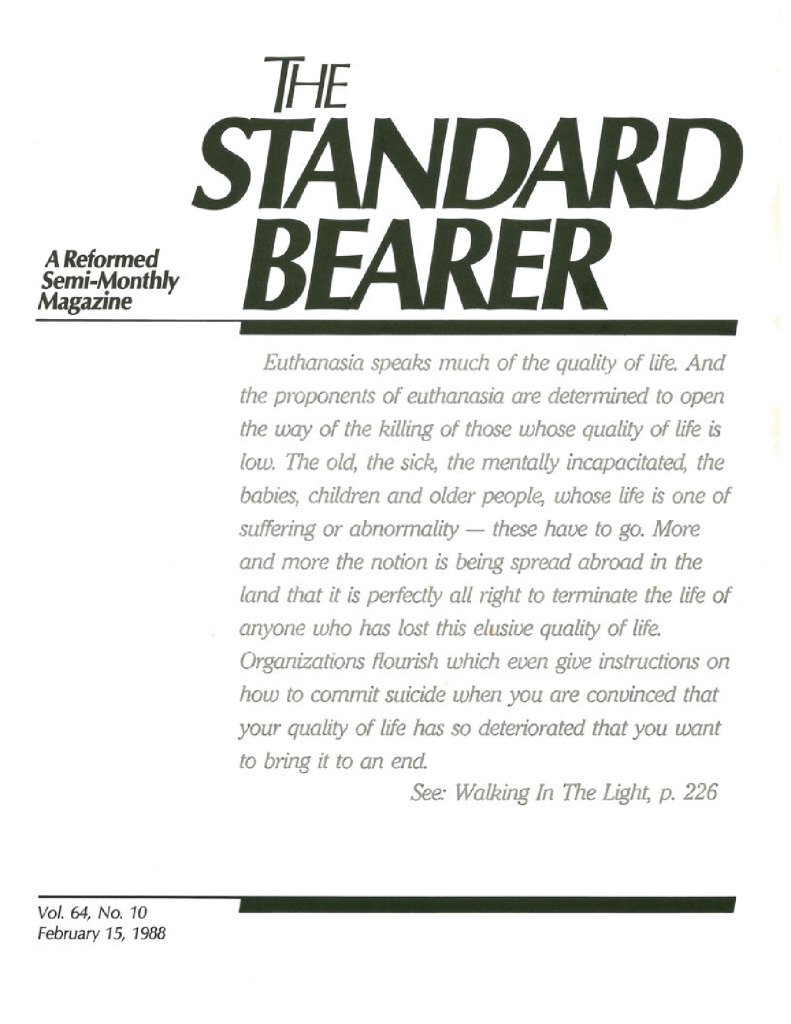