I must admit that, when I first caught wind that the Reformed Free Publishing Association (RFPA) was putting out a second edition of Hoeksema’s Triple Knowledge, I was a bit skeptical. I already possessed the hefty three-volume set; was it really necessary to replace them? But any lingering doubts I may have had were put to rest when I received my copies of the first five volumes. The project is worthwhile, and the new edition is welcome.

Working from the outside in, the first and most obvious change is that Hoeksema’s work now appears in ten volumes. But, as some may be aware, this is not something altogether new. In fact, it reverts back to the original format of the first edition. Mark Hoeksema, grandson of the author, notes in his foreword, “Hoeksema originally wrote his exposition of the Heidelberg Catechism as a lengthy series of articles in the Standard Bearer,” beginning in 1941. As these articles were printed, William B. Eerdmans approached Hoeksema about putting them in book form. He agreed, and Eerdmans published the work in ten volumes between 1943 and 1956.

Thirty years later several of those volumes were out of print, and the RFPA made work of rectifying the situation. From 1970 to 1972, the Triple Knowledge was reprinted, but the format was changed from ten, slim volumes to three, large tomes.

Now fast forward another forty years to the present, and the Triple Knowledge is again out of print. That fact in itself makes the presence of this new edition worthwhile. But the RFPA decided that, instead of reproducing the work in three volumes, they would go back to the original ten-volume format. Volume one, entitled In the Midst of Death, treats Lord’s Days 1–4 and the first section of the Catechism having to do with our misery. Volume two (God’s Way Out) examines Lord’s Days 5–10, which includes the first part of the Apostles’ Creed dealing with God the Father and our creation. The third and fourth volumes (The Death of the Son of God and The Lord of Glory) treat the saving work of Jesus Christ in His humiliation and exaltation (Lord’s Days 11–20), and volume five (Abundant Mercy) brings to a conclusion Hoeksema’s treatment of the Apostles’ Creed (Lord’s Days 21–24). Volumes six and seven (Baptized into Christ and Eating and Drinking Christ) treat Lord’s Days 25–31 and the sacraments. Volume eight (Love the Lord Thy God) deals with the first table of the law as explained in Lord’s Days 32–38, while volume nine (Love Thy Neighbor for God’s Sake) covers the second table of the law in Lord’s Days 39–44. The final volume (The Perfect Prayer) explains Lord’s Days 45–52 and the Lord’s prayer.

There is value, I judge, in having Hoeksema’s work divided into ten volumes. First, having the ten volumes allows the reader to better understand the logic and flow of the Heidelberg Catechism itself, since each volume treats one of the major subsections of the creed. Second, this format makes the Triple Knowledge less intimidating and more accessible. The thought of plowing through three massive volumes of more than six hundred pages each would make even the most voracious reader balk. But the relatively slender volumes of the present edition seem much more manageable and will (we hope) stimulate ready consumption of their contents.

The second noticeable difference in this second edition is in the appearance. Although appearance is not the foremost consideration, it is an important one. The outward appeal of a book encourages one to take up and read. Of late the RFPA has done a wonderful job of producing attractive-looking publications. The Triple Knowledge is no exception. Gone are the nondescript grey covers with the unforgettable black and pink dust jackets of the 1970s. The new edition comes in a handsome blue and red cloth cover and will make a beautiful addition to any library.

Digging deeper, a third important change is in the careful editing of the books. The foreword notes that “the revisions are strictly formal to bring the books into conformity with today’s publishing standards.” The cramped font of the previous edition has been replaced with an elegant, readable type. Chapters have been broken down into sections. Quotations from other sources are noted by indentations. Thorough acknowledgement of these sources is given in footnotes. Minor infelicities of grammar and style have been corrected. The end result is a readable, reliable exposition of the beloved Heidelberg Catechism.

Although a number of commendable changes have been made in this second edition, the most outstanding feature is something that has not changed. What’s not new in this new edition is the content. The reader of this edition will find the same rich, deep explanation of the Catechism as was found in the previous edition. The content is biblical. Hoeksema makes a point of grounding every doctrine in the Scriptures. The content is theological. Hoeksema does not confine himself strictly to the text of the Catechism but expands upon and develops the various truths of Scripture that are set forth in it. The content is thoroughly Reformed. Repeatedly, Hoeksema draws on others in the Reformed tradition to support his explanation of the Catechism, in so doing showing that his position is not novel but has precedence in the Reformed tradition. The content is extensive. It is one of the few in-depth commentaries on the Catechism in the English language. In bygone days it was common for theologians in the Dutch Reformed tradition to expound the Catechism at length (for example, Klaas Schilder spent more than two thousand pages explaining only the first ten Lord’s Days). But works of such magnitude are hard to find in English. Hoeksema’s is one of the few.

This publication is of particular value to ministers who are regularly called on to preach through the Catechism. Hoeksema’s work is not first of all that of a scholar, but of a preacher who spent nearly fifty years preaching through the Catechism. The advice given to me by a more experienced preacher was to read through Hoeksema’s Triple Knowledge during my first round of Catechism preaching and make his theology my own. I have not yet finished that first round, but I look forward to doing so with these volumes in hand.

Yet the value of these volumes is not just for ministers. The Reformed believer can read them with great benefit. Although not written in a devotional style, they can be read devotionally. I can envision a person sitting down on a Sunday morning before church with one of the volumes in hand, reading Hoeksema’s explanation of the Lord’s Day that is the subject of the sermon that day.

The RFPA is to be commended for bringing back this gem after forty years. I trust that the coming generations will benefit from its treasures for the next forty years or more, if the Lord tarries. 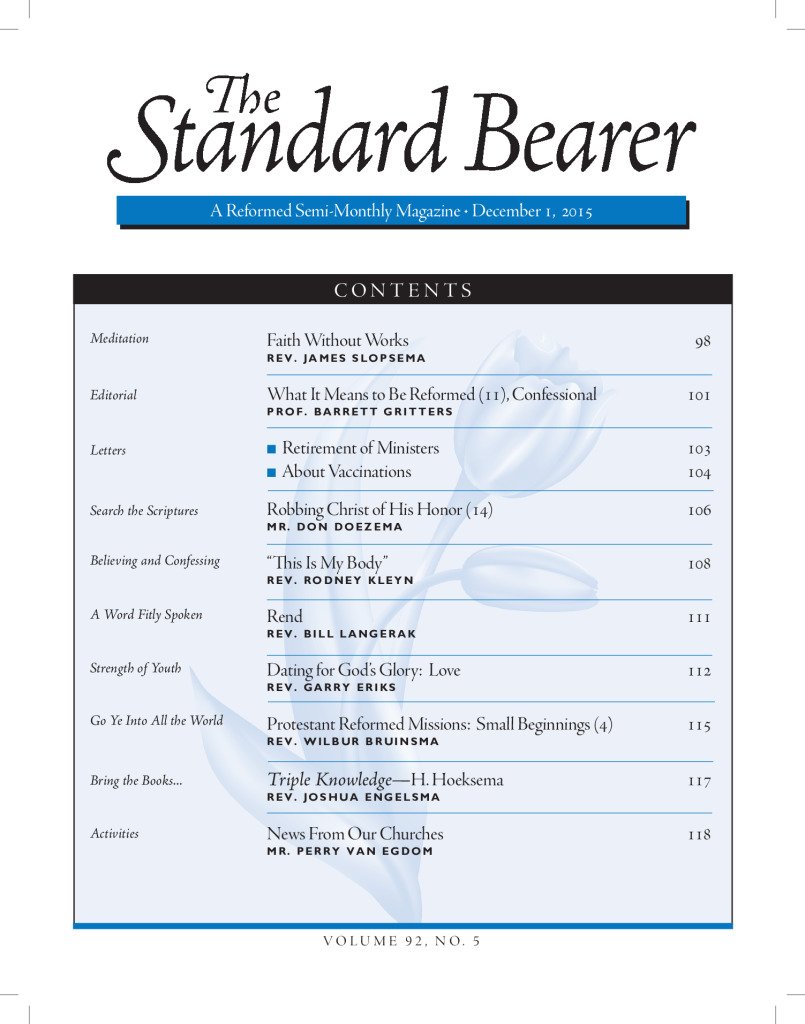