We enter now into a study of the trial of Jesus of Nazareth, the truth of God.

Note well: we will be studying the trial of the Wonderful Jesus Christ. Not the trial of William Jefferson Clinton.

I hope this relieves you. The trial of the President, concluded now, has tried us all.

But there is much to learn comparing the trial even of a president-scoundrel, and the trial of the King-Savior.

About the trial of the President.

No one in his right mind would or could deny that the trial of President Clinton was a trial concerning truth. Those in their left mind would. But they are mistaken. The trial of the impeached President was not about adultery, nor about Republicans getting back for Bork, Iran-Contra, or even Woodstock. It was about truth, and truthfulness.

But more: it was a trial of truth itself—the existence of it, whether it can be known, and the worth of it.

So they put another person on trial, the person who is usually just witness at these things—Truth.

Brutal trial—did you see it? Especially nasty when Truth himself was being cross-examined. “Truth,” accused Attorney Pilate II, Jr.: “What are you? I’ll tell you what you are! You are nothing but opinion. You are subject to interpretation. Your is is another man’s is not. I charge you with lying.” “And,” Counselor Good Economy leveled, “Even if you are something, Truth, you are not much, and nothing compared to the economic state of the union.” “Further,” Prosecutor Pollster shouted, “You are certainly not the will of the American people.” “Besides,” Lawyer Lustful-Lifestyle-is-Legal lampooned, “You give me and all the rest of us cramps.”

Yes, they tore at him! Some came to his defense, and offered republican and constitutional words about him. But truth himself was silent, except for this. He said once (and that was enough): “I am truth.” And they found him guilty. Liar Clinton acquitted. Truth guilty. Truth tried, and found guilty of pretending to be (absolutely) what it cannot be since all is relative; found guilty of threatening the economy; found guilty of sneaking and seeking to fetter the freedom to engage in private things no matter what they are so long as they are legal almost; found guilty of attempting to tyrannize a democratic people. Guilty. On all counts. Of very high crimes and no low ones.

And sentenced to die. No doubt. They will not let Truth get away with being Truth! It must not be allowed even to languish in any cell in any jail, think-tank, or church. “No Truth! It must not be! It has dragged us too long from the back of its car, taken us out of the bar and tied us to a post and beaten us and left us for dead too often, discriminated right and left and for too long against old men, homosexuals, blacks, whites, politicians, lovers, and friends.”

Sentenced to die in a white house. Sentenced to die in every house of society. Truth: February, 1999, the year of our Lie. The year Lie told liars to be fruitful and multiply and subdue the earth. The year of the creation “higher up” of an acceptable, tolerable class of little white house lies so that truth would die and lie would live lower down and all around. Let there be lies in the military. Let there be business lies. Let there be Billy and cookie jar lies. Now there is this sacred Precedent. Let nothing else be sacred. Halleliejah. Praise to the god Lie.

What a trial! And we could certainly go on. We might more than mention how this trial and condemnation of truth at the trial of William Jefferson Clinton was a trial also of all those, the politicians and the polled, who pleaded for their Barabbas and cried for truth to be crucified.

But there is another trial we must be going to, and we want to ponder. It is the trial of the Lord Jesus. There is the trial of trials. There is the precedent of precedents. There were the kangaroo courts of kangaroo courts. There was a trial some 1970 years ago in Jerusalem which can tell us what just went on in Washington, and just what has gone on to make this mess possible, and just what will go on from now.

What is truth? Truth is what is. Truth is a Who is. It is the God who is. It is reality—eternal and abiding. And not just a being, but a moral being is this God-Truth. It is Truth who is Love, Truth who is Trinity-Love, Truth who is Personal, Fellowship Truth, Righteous, Holy, Good Truth. This God who is Truth is pleased to reveal Himself outside of Himself. He will have Truth shine in a creation He makes and next to untruth which He does not. He will have Holiness and Righteousness lit up in His punishment of the lie and liars human and angelic. Truth will have Holiness and Love glorified in the salvation of some and Holy-Truth-Love come down to atone and to forgive and to make liars partakers of Truth and truthful in life.

This is Jesus! This truth, this God-Truth is Jesus! He is who God is. He is what God says. He does what God does. He is the revelation of the God of truth, of the God who is, and who is Good. He is the consummate and embodied revelation of that God, for to see Him is to see the Father, and to believe in Him is to be on the Way to the Father (John 14). He is the God-Word-Truth true to Himself and to His purpose and promise, for Jesus the Christ comes as God, exactly according to God’s counsel and Word to save and never to forsake. Truth is Jesus—God with us—just as He determined, just as He has said.

Truth, and truthful, faithful to God—this is Jesus as man, and servant of Jehovah. He comes who is God and Truth to be truthful, and to do the will of the Father. He comes to see all, to do all in the light of God and for the purpose of glorifying the Father. He comes, truthful Son, and will in human heart and with human will and in human soul be faithful to the heart and will and soul of God.

It is known throughout the Bible, and in the Bible’s record of the trial of Jesus itself, written down not by skilled and speedy court stenographers, but by graced, Spirit-moved, and called men, in Matthew, Mark, Luke, and John. Jesus Himself declares in His trial that He came to bear witness to the truth (John 18:37). Jesus Himself in this trial declares the Truth, under oath: that He is the Son and Christ of God.

And the trial itself is just this: Jesus as the Truth of God is on trial. The Jews say He is a lie. Pilate, in his infamous question “What is truth?”, represents the world without religion which wants to doubt the existence, the knowability, and the worth of truth. And the people lied to to lie, shout crucify…the Truth.

Truth. Discerned by no law, religious or civil, and uncovered not by one star or a thousand lawyers, but by the Spirit of truth—real truth, was on trial then, when Jesus was tried. And man’s being true and truthful and therefore true morality was at stake then.

What was done recently in the Senate Court, therefore, compared to what was done in Jerusalem, was peanuts. These past weary months constitutional truth has been parleyed about and compromised. Long ago in Jerusalem theological, God-Truth was condemned and crucified. These past months morals were mentioned as something which just might be important for a civil leader to have. Long ago true morality among men, though constitutions be written and many laws made, was forfeited and rendered impossible. For then the Absolute was absolutely, completely rejected.

In fact, Jesus’ trial was the decisive trial, the trial of history, the trial of the Truth. It is because of Jesus’ trial that there was this trial of truth in the United States Senate. It is because men rejected Truth then that men, even in all their laws and concern for decency and good order have cared all along (not just now!) far less for truth than for expediency, far less for true virtue than for what the culture of a

One thing we need to remember as we pore over the sacreddocuments of the Christ trial. At the trial of Jesus, and when its verdict was in, men more than democrats and turncoat republicans were tried. Men as men were tried. And the whole world was found guilty.

You too. And I. We were there when they crucified our Lord. And not neutral. Guilty. It is that bad. Sin is. Lying is. Has been since sin. We do not want God, nor any revelation of God. We all, obviously foolish and stubborn donkeys, grand old respectably religious Pharisees, or dignified skeptics have cast our vote with Adam. And one thousand to zero a long time ago we voted “away with Him.”

Sometimes tremble. Right now when you think about that really important trial. Right now when the papers have stopped chatting and the lurid details of a certain trial are forgotten. Right now when we shake our heads at those bad men and their political maneuverings. Right now when as always the Bible alone remains to tell the Truth as it is in Jesus…and about ourselves.

Trembling. That is how we must go into learning the Truth of this trial of the Savior.

Tremble. The Truth, the Whole Truth, and nothing but the Truth. Crucified. We were there. We are even inclined to go back there and do it all over again. Crucify. Truth. So…help us God!

Trembling. And…believing! And rejoicing! Bible study must be that way, too. Or we deny the gospel truth. For truth is: He is denied, that we might never be denied. Truth is: at the trial He is going forward to save liars. And He has saved them. And keeps them. You liar. And me liar. Saved. For Truth’s sake.

Hallelujah! All praise to the Lord God of Truth! 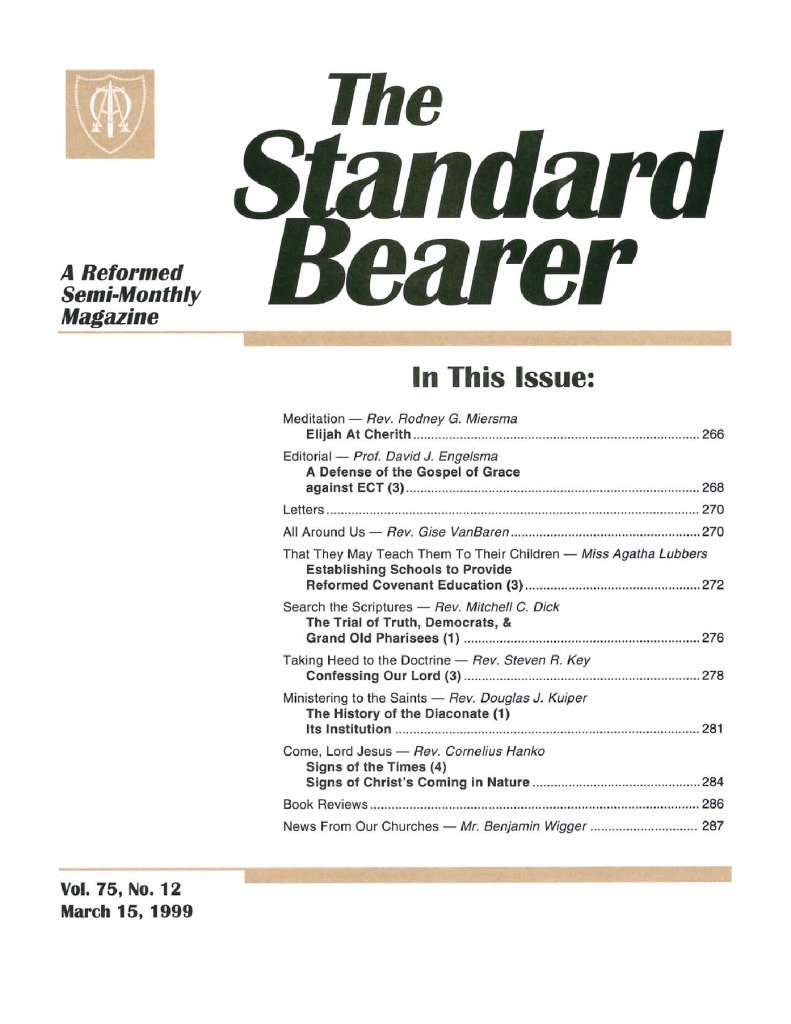