The Trial of Abraham’s Faith

The Trial of Abraham’s Faith

“By faith Abraham when he was tried, offered up Isaac: and he that had received the promises offered up his only begotten son,

Of whom it was said, That in Isaac shall thy seed be called:

Accounting that Cod was able to raise him up, even from the dead; from whence also he received him in a figure. “

How strange is this event in the life of Abraham! First, he and Sarah must wait twenty-five years before Isaac is born, till both are utterly impotent to bring forth seed. And then this only son must be offered up to the Lord. This is the climactic event i Abraham’s life. This is evident from the epistle c James, James 2:20-24. This holy writer singles OL this event in the life of Abraham.

This incident is recorded in Genesis 22. On the one hand, Abraham’s response was immediate. Did he inform Sarah of the Lord’s command? And, on the other hand, what a journey this must have been to a mountain the Lord would show him!

A MOST SEVERE TRIAL

God here tries or tempts Abraham. He commands him to offer up his only son. We may well ask: how is this possible? How and why did the Lord command him to do such a thing?

The distinction between trials and temptations must not be sought in the word as such. It is stated that the word trial always has a good meaning in Scripture, whereas the word temptation is usually used in an evil sense. And if it be objected that James, in James 1:13-16, speaks of temptations whereas we read in this text that Abraham was tried, we may answer that the word here is the same word as in James 1:13. The distinction between “trials” and “temptations” lies in the one conducting them. When Satan tries or tempts us, puts us to the test, his purpose is always evil, to lead us into evil. But when the Lord tries or tempts us, He does it to purify us. His motive is always good and salutary.

To understand these trials of God’s people, we must. understand that we are moral-rational creatures. This characterizes God’s entire work of salvation. The grace of God does not simply operate upon us but inus and through us. We are made spiritually active in His work of grace. I assume that from the viewpoint of God’s power He could save us and lead us into glory without these trials. But this is not God’s way. He purposes to purify and strengthen our faith through many trials and temptations.

As far as Abraham is concerned, he was confronted with a two-fold choice. He could either obey God or disobey Him. He could either sacrifice his son and break, his heart, or he could obey the natural desires of his heart and spare himself the. agony of sacrificing Isaac. He stood before this choice. And the same trials also confront us. It is always either-or. We are always faced with the alternative: walk in the ways of the Lord contrary to our natural desires, .or disobey the word of the Lord and satisfy the carnal desires of our flesh.

This trial of Abraham was most severe.

First, he must slay his son. He must not only watch him die. Were we ever at the deathbed of one of our children? What a tremendous agony of heart and soul to watch the agonies of that final death struggle! Abraham, however, must slay his son. He is commanded by God to sacrifice him upon Mount Moriah. He must thrust the knife into his heart or throat.

Secondly, he must slay Isaac, his only begotten. Genesis 22 adds the observation that Isaac is “thine only son whom thou lovest.” One may object that Ishmael, too, was Abraham’s son. However, Ishmael was only the son of Abraham, not of Abraham and Sarah. Besides, Ishmael was no longer with Abraham; he had been sent away. And, Isaac was his only son, also as far as the covenant is concerned. So, Abraham must sacrifice Isaac, his only begotten, whom he loved.

Thirdly, Isaac was the only hope of the covenant. The text emphasizes this. We read: “Of whom it was said that in Isaac shall thy seed be called.” The meaning of this expression is clear. The “seed” here, of course, does not refer merely to Abraham’s natural descendants, the Jews. The seed here is Christ and, in Him, all the elect of God throughout the ages. The Church is meant here, the elect church of God, God’s covenant people elected from before the foundation of the world. And now Abraham is called to sacrifice this son. He waited twenty-five years for this Wonder Child. Isaac now has become seventeen years of age. He was the delight of Abraham and Sarah. And Abraham must slay him. Remember: none can ever take his place. God’s covenant stands or falls with him. This is Abraham’s test, imposed upon him by the living God. What a severe trial!

That Abraham had a struggle is indicated in the text. We read that he accounted. . . . Abraham, therefore, counted, calculated, computed; he considered the pro’s and the con’s, the things for and against, and concluded that God was able to raise him from the dead.

Abraham experienced this struggle at the very outset. The Lord had commanded him to offer up his son. InGenesis 22:3 we read that he rose up early in the morning. So, by this time the father of believers had accounted that God was able to raise him up. This implies, however, that he had struggled throughout that night, had now come to his decision.

Then, he struggled while enroute to Mount Moriah. What a tedious, tortuous journey this must have been of three days! While on the way, he must have informed Isaac of the purpose of the journey without informing him that he was to be sacrificed. Indeed, had he wished, he could have retraced his steps. Abraham, however, never falters along the way.

And then we have the final scene. Abraham commands his servants to tarry behind with the asses. Enroute to the top of the mount, Isaac asks his father, according to Genesis 22:6-7. Abraham answers him. Did the father of believers in his answer refer to Isaac, or to a sacrifice other than that of his son which the Lord would provide?

How wonderful is Abraham’s victory! Indeed, Abraham offered up Isaac, his only son. The text emphasizes this. We read in verse 17 that he “offered up Isaac,” and the word indicates a completed act on the part of Abraham. Of course, this means that to Abraham the deed was as good as accomplished; he beheld his son as sacrificed and slain.

How did he conquer?

First, he accounted that the Lord was able to raise him from the dead. Now we might be inclined to say that it must have been comparatively simple for Abraham to come to this conclusion. Was not Isaac the long awaited one, the child of the promise? Would not “in Isaac his seed be called”? Surely, Isaac must live. So, if he must be sacrificed, he must surely be raised from the dead. And God is able to do this.

Simple we say? Yes, provided that we bear one thing in mind, to which we will shortly call attention. But, does this simple, logical conclusion make Abraham’s task less difficult? Abraham, we understand, must still contend with himself, and Isaac is his son, his flesh and blood. Does the fact of his being raised lessen the agony of driving the knife into his heart? Besides, why kill him if he will be raised anyway?

And this we may apply to the Church throughout the ages. How often God’s people are subjected to cruel tortures! We read of them at the end of Hebrews 11. And we, too, believe that God will raise us from the dead. But, we must contend with our flesh and blood. Are we always ready to submit our bodies to unbelievable and inconceivably cruel tortures?

Secondly, Abraham gained this victory by faith. And faith, in Hebrews 11, and also in this text, is the evidence of things unseen and the substance of things hoped for. After all, he must slay Isaac, and that means the absolute end. Beyond this, Abraham could not see; he dealt with things invisible. His conclusion concerning Isaac’s resurrection was not a conclusion of reason, but of faith. Besides, never had a resurrection occurred in the history of the world and of the church. But he believed in God and in His promise. This faith drew from the father of believer the conviction that God would raise Isaac from the dead. And this applies also to the Church throughout the ages. To believe is contrary to the flesh, a taking hold of the invisible. We must believe that God is that He loves us, that all our sins are forgiven, that life awaits us in heavenly glory and immortality. And all these things are invisible, contrary to all that we see, also contrary to our flesh.

What a glorious fruit for Abraham! First, he also received him in a figure. He had really sacrificed hi son, in his mind and thoughts. And now, not actually but in a figure, also in his thoughts, he received him again from the dead. He not only saw Isaac as slain but also as raised from the dead. Secondly, Abraham experienced the strengthening of his faith. Now this is always God’s purpose. when He tempts or tries His people. And thus it was with Abraham. A man becomes physically stronger as he exercises. This is also spiritually true. It is for this purpose that these trials are necessary. As we are tempted and endure and experience the wondrous power of God to sustain us in our trials we grow and are strengthened We do not grow in the knowledge of what we can do but only in what faith, God’s gift, can enable us to do. And, receiving Isaac from the dead as in a figure Abraham also received from God the blessed revelation that it was the will of God, not only to call his seed in Isaac, but also that this would occur in the way of death and resurrection. Indeed, the father of believers saw Christ’s day afar off and he rejoiced in it.

And for us? Beneficial and blessed are the afflictions and trials of the people of God. The) always serve the strengthening of our faith. Enduring them we experience the power of God’s grace anew. They serve to purify us. They enable us to count al things but loss for the sake of Christ. They serve to impress upon us the folly of the things below and the glory of what awaits us. And, tried by fire as silver and gold, we believe that all the sufferings of this present time are never to be compared with the glory that shall follow. Indeed, we are always more than conquerors through Christ Who loved us. 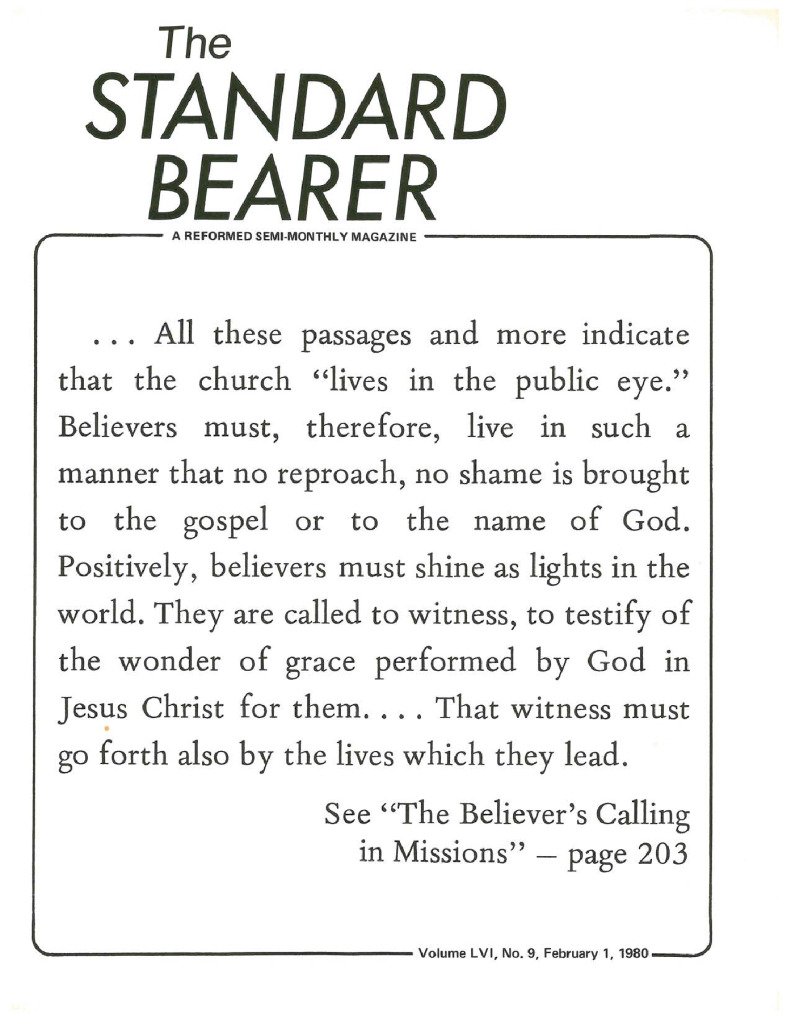