The Time of the Birth of Christ in Prophecy

The Time of the Birth of Christ in Prophecy

It is one of the remarkable peculiarities of the religion of Israel, that, while it claimed superiority over every other, and was distinguished from them all, as alone inculcating the worship of the only living and true God, and while it was perfectly suited to the purpose for which it was designed, it acknowledged that it was itself only preparatory to the future, a better, and a perfect revelation. It was professedly adopted and limited to one peculiar people;—it was confined, in many of its institutions, to the land of Judea; and being full of promises of better things to come, for which it was only the means for preparing the way, it was evidently intended to be the presage of another. It was not even of itself calculated to fulfill the promises given unto Abraham, that in him all the nations of the earth should be blessed; though its original institution was founded upon this promise, and although the accomplishment of it was the great end to be promoted, by the distinction and separation of Ibis descendants from all the nations of the earth. But it was subservient to this end, though it could not directly accomplish it; for the coming of the Saviour was the great theme of prophesy. From the commencement to the conclusion of the Old Testament Scriptures, it is predicted or prefigured. They represent the first act of divine justice, which was exercised on the father of the human race, as mingled with divine mercy. Before their exclusion from paradise, a gleam of hope was seen to shine about them, in the promise of a suffering but triumphant Deliverer. To Abraham the same promise was conveyed in a more definite form. Jacob spoke distinctly of the coming of a Saviour. Moses the legislator and leader of the Hebrews, prophesied of another lawgiver that God was to raise up in a future age. And while these early and general predictions occur in the historical part of Scripture, which sufficiently mark the purposed design of the Mosaic dispensation, the books that are avowedly prophetic are clearly descriptive, as closer search will attest, of the advent of a Saviour, and of everything pertaining to the kingdom He was to establish. Many things, apparently contradictory and irreconcilable, are foretold as referring to a great Deliverer, whose dignity, whose character, and whose offices were altogether peculiar, and in whom the destiny of human nature is represented as involved. Many passages that can bear no other application, clearly testify of Him: Thy king cometh—thy salvation cometh—the Redeemer shall come to Zion—the Lord cometh—the messenger of the covenant He shall come—blessed is He that cometh in the name of the Lord, are expressions that occur throughout the prophecies. These unmistakably speak of the coming of a Saviour. But were every other proof wanting, the prophecy of Daniel is sufficient incontrovertibly to establish the fact, which we affirm in the very words,—that the coming of the Messiah is foretold in the Old Testament. The same fact is confirmed by the belief of the Jews in every age. It has been so deeply impressed upon their minds, that, notwithstanding the dispersion of their race throughout the world, and the disappointment of their hopes for eighteen hundred years after the prescribed period of His coming, the expectation of the Messiah has hitherto formed a bond of union which no distance could dissolve, and which no earthy power could destroy.

As the Old Testament does contain prophecies of a Saviour that was to appear in the world, the only question to be resolved is, whether all that it testifies of Him be fulfilled in the person of Jesus Christ.

The time of the Messiah’s appearance in the world, as predicted in the Old Testament, is defined by a number of concurring circumstances, that fix it to the very date of the advent of Christ. The last blessing of Jacob to his sons, when he commended them together, that he might tell them what should befall them in the last days, contains the prediction concerning Judah: “The scepter shall not depart from Judah, nor a lawgiver from between his feet, until Shiloh come.” The date fixed by this prophecy for the coming of Shiloh, or the Saviour, was not to exceed the time that the descendants of Judah were to continue a united people, that should be governed by their own laws, and should have their judges from among their brethren. The prophecy of Malachi adds another standard for measuring the time: “Behold, I will send my messenger, and He shall prepare the way before me; and the Lord, whom ye seek, shall suddenly come to His temple, even the messenger of the covenant, whom ye delight in; behold he shall come, saith the Lord of hosts.” No words can be more expressive of the coming of the promised Messiah, and they as clearly imply His appearance in the temple before it should be destroyed. But it may also be here remarked that Malachi was the last of the prophets: with his prediction the vision and the prophecy was sealed up, or the canon of the Old Testament was completed. Though many prophets immediately preceded him, after his time there was no prophet in Israel; but all the Jews, whether of ancient or modern times, look for a messenger to prepare the way of the Lord, immediately before His coming. The long succession of prophets had drawn to a close; and the concluding words of the Old Testament, subjoined to an admonition to remember Moses’ import that the next prophet would be the forerunner of the Messiah. Another criterion of the time is thus imparted. In regard to the advent of the Messiah, before the destruction of the second temple, the words of Haggai are remarkably explicit: “The desire of the nation shall come: and I will fill his house with glory, saith the Lord of hosts.—The glory of this latter house shall be greater than the former.” The contrast which the prophet had just drawn between the glory of Solomon’s temple and that which had been erected in its stead, to which he declares it was, in comparison as nothing, the excellency of this latter house excelling that of silver and of gold; the expression so characteristic of the Messiah.

The Savior was thus to appear, according to the prophecies of the Old Testament, during the time of the continuance of the kingdom of Judah, previous to the destruction of the temple, and immediately subsequent to the next prophet. But the time is rendered yet more definite. In the prophecies of Daniel the kingdom of the Messiah is not only foretold as commencing in the time of the fourth monarchy, or Roman empire; but the express number of years, that were to precede His coming, are plainly intimated: Seventy weeks are determined upon thy people and upon the holy city, to finish the transgression, and to make an end of sins, and to make reconciliation for iniquity, and to bring in everlasting righteousness, and to seal up the vision and prophecy, and to anoint the Most Holy. Know therefore and understand and, that from the going forth of the commandment to restore and to build Jerusalem, unto the Messiah the Prince, shall be seven weeks and threescore and two weeks,” Dan. 9:24, 25. Computation by weeks and years was common among the Jews, and every seventh was the Sabbatical years; seventy weeks thus amounted to four hundred and ninety years. In these words the prophet marks the very time, and uses the very name of the Messiah’ the Prince; and so entirely is all ambiguity done away, that the destruction of the city and the sanctuary, the ceasing of the sacrifice and the oblation, and the commencement of the long-continued desolation that has ever since ensued, are all definitely marked as consequent on the cutting off of Messiah:—And after threescore and two weeks shall Messiah be cut off, but not for Himself: and the people of the prince that shall come shall destroy the city and the sanctuary: and the end thereof shall be with a flood, and unto the end of the war desolations are in the midst of the week he shall cause the sacrifice and the oblation to cease, and for the overspreading of abominations he shall make it desolate, even until the consummation, and that determined shall be poured upon the desolate” (Dan. 9:26, 27).

The plainest inference may be drawn from these prophecies. All of them, while in every respect, they presuppose the most perfect knowledge of the future, accord in perfect unison to a single precise period where all their different lines terminate at once—the very fullness of the time when Jesus appeared. 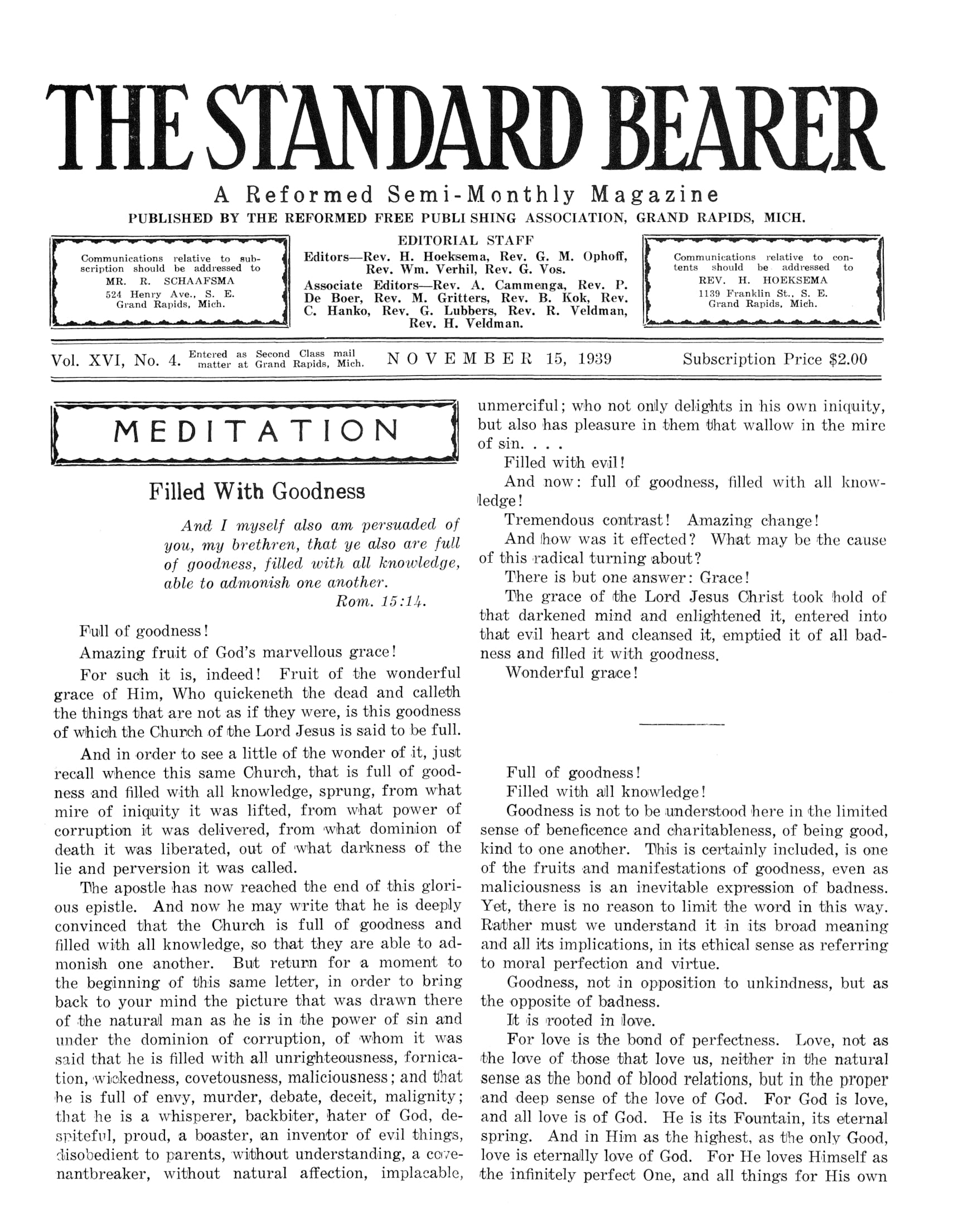 No more articles in this Issue