The synod of the De Wolf group, according to The Ban­ner of July 29, 1960, sent a letter to the synod of the Chris­tian Reformed Church in which it requested “to consider the Three Points of Common Grace as without any further bind­ing force.”

To this the synod of the Christian Reformed Church gave the following reply:

“We thank you for the fraternal and cordial reply to our Synod’s letter to you in June 1959. In reply to this, your communication, we wish to observe that we appreciate the general tenor of this document, which indicates that there is on your part a sincere desire for reconciliation and unifica­tion with our church.

“Addressing ourselves to the main thrust of your letter (paragraph 4, page 1): ‘May we urge you, therefore, to consider the Three Points of common grace as without any further binding force?’ we conclude that this question is the heart of the matter which you present to our Synod. You are asking our Synod simply to set aside or discard, without any restrictions or qualifications, that which was done by our Synods of 1924 and 1959. This is evident from your state­ment (second part of paragraph 3, page 1): ‘We, therefore, do not desire to maintain the Three Points or any new formulation or interpretation as necessary for a church to stipulate and insist upon for unification of churches.’

“Synod may on occasion be compelled to make emergency decisions which serve a definite purpose in a given historic moment. Such emergency decisions are dated and may in time become inactive because they have served their purpose and are no longer needed. The result could be that such decisions are in effect set aside. Reflecting however, on the synodical decisions of 1924 respecting the Three Points, we believe that an outright and official setting aside of them is unwarranted for the following reasons:

“a. The serious situation in 1924 which called these Three Points into being.

“b. The salutary effect of these Three Points in producing rest and peace in the churches.

“c. The fact that such setting aside of the Three Points would run counter to and virtually nullify a large measure of agreement which had been achieved.

“We are of the opinion that such a simple discarding of the Three Points, as well as of the elucidations and interpretations of these given in the letter of our Synod of 1959, is not desirable. We would rather point out to you a more positive basis upon which we may seek for unification. This positive approach is not to be sought by requesting our Synod virtually to discard what it deemed to be necessary to state in 1924, and what is still necessary to maintain at the present time; nor in demanding of you an expression of total agreement with the Three Points as formulated by 1924 and further elucidated by 1959; but rather by accepting a basis on which we can unite.

“It is our considered judgment that in as much as both your denomination and ours subscribe to the Word of God and the Three Forms of Unity, unification of our churches could be effected:

“a. if you will agree that the Three Points are neither Arminian nor Pelagian; that in the light of the official interpretation given by our Synod of 1959, the objection that the Three Points are in conflict with Scripture and the Forms of Unity is not valid; and that you will agree not to agitate against official interpretations.

“b. if we do not require submission in the sense of demand­ing total agreement with the Three Points; we recognize and bear with scruples which you may have, in the expectation that we together may come eventually to a better understand­ing of the truth; and not bar those who have certain mis­givings or divergent interpretations as long as they refrain from propaganda for their interpretations.

“As to the method of affecting such a union we suggest that:

“b. If this is to be worked out on a local basis, this be left to the individual consistories and classes in which such at­tempts toward union would be made.”

It is plain from the above quotation that the Christian Reformed Church would still maintain the Three Points of Common Grace. But the question: Are the Three Points still binding? is not positively answered.

You can be a member of the Christian Reformed Church and have scruples regarding the Three Points, provided, of course, that you do not agitate against the official interpreta­tions. If I understand the word “scruple,” it means: doubt, conscientious distrust, unbelief. In this case the scruple is with regard to the Three Points. One, therefore, who has scruples regarding these points of doctrine does not believe them, has conscientious objections to them. And I use the word “conscientious” not to indicate some mystical feeling, but I understand it to indicate that strong testimony in the heart of the believer who looks at all things, also the doctrine of common grace, in the light of God’s Word, and is con­vinced by that light and testimony that the doctrine is false. One who has scruples of this kind may be a member of the Christian Reformed Church provided he does not try to gain others to his view by way of propaganda. Viewed in this light, the Three Points are not binding.

On the other hand, the Three Points are binding to him who would dare to denounce them as Arminian and Pelagian, or who would seek to propagate his divergent views. Such an one could not be a member of the Christian Reformed Church. It is for this reason that the Three Points must be maintained.

But is not the position set forth in the above quotation a very weak position? Indeed it is. For notice that the church, on the one hand, takes the position that the Three Points are binding, and in 1959 insisted that they were both Scriptural and Confessional; while on the other hand, it is possible to be a member of that church and not believe in the Three Points. The position is that you may believe in them or desist, so long as you do not agitate against the official interpretations. We, as is well known, do not believe the Three Points are Scriptural and Confessional. We could therefore never subscribe to them. But, for the sake of argu­ment, let us suppose that the Three Points are Scriptural and Confessional. Are then the Three Points not binding upon the conscience of the member of the church that main­tains them? I believe you have to say they would be. Could one who is a Reformed believer ever refuse to subscribe to Scripture and the Confessions? I think not. Yet the Chris­tian Reformed Church will allow its members and prospective members to desist in subscribing to the Three Points so long as they do not agitate against official interpretations. I say this is a very weak position to say the least. I understand, of course, that it cannot be expected of every member of the church that he understands thoroughly all her doctrine. But certainly such a doctrine as common grace which has devel­oped out of years of controversy, and which has been held before the public eye by both those for it and against it for so many years, is well understood I would say especially by those who have opposed it, whether they belong to us or De Wolf. We still run into people in the Christian Reformed Church who ask why Rev. Hoeksema made up those Three Points, thus revealing their ignorance. But such ignorance does not obtain among those who are or once were Prot­estant Reformed. And, therefore, if the Three Points are Scriptural and Confessional, the church that maintains them should bind them on its membership. Doctrines and Confes­sions are not only instruments to keep out of the church what is in disagreement with it, but they are also instru­ments to live by.

But there is more to be said “about the above quotation. It cannot have passed the reader’s notice the reasons offered by the Christian Reformed Church for maintaining the Three Points. The first reason is “the serious situation in 1924 which called these Three Points into being.” I am partic­ularly interested in this reason. Of course, the Christian Reformed Church supposes that those to whom their letter was directed would know what that “serious situation in 1924” was, and therefore did not feel impelled to describe it. But because I fear they have a different understanding of that “serious situation” than I do, I am moved to tell our readers what it was. The Christian Reformed Church im­plies by this expression that its denominational existence was jeopardized by the fact that certain ministers in the church were disturbing the peace of the denomination by publicly asserting their opposition to the doctrine of common grace. And to stop this growing agitation, the Three Points were concocted on the basis of which the various classes in which the agitators resided imposed discipline and ultimately cast them out. Thus according to point b, peace was restored; and point c, this peace they would keep at all costs.

The truth is, that prior to 1924 there were two elements in the church, one conservative group in the minority which held strictly to the Word of God and the Confessions; the other, a liberal element which on the basis of the doctrine of common grace would open the gates for the flood of worldly-mindedness to come into the church. They wanted, so to speak, to play ball with the world. Because that first element (many of whom later recanted) loved the church and the truth, and strongly insisted that Athens and Jerusalem could not live together under the same roof, they were cast out and that, too, on the basis of the doctrine of common grace as sum­marized in the Three Points which is neither Scripture nor the Confessions. Hoeksema, Danhof and Ophoff who were the stalwarts defending the purity of the church, her doctrine and life, were disowned and cast out on the basis of a doc­trine formulated and adopted by a majority that refused to be pestered with the truth of God’s Word and our Confes­sions. O, it is true that this liberal element could never have succeeded if their stand had no semblance of truth. So they hastily prepared texts of Scripture without exegesis, and at random quoted parts of the Confessions that seemed to sus­tain their view. But to this date, now thirty-six years later, no one has successfully disproved the arguments of those cast out which clearly show up the fallacy of the Three Points.

But then, if they did that, they would surely hear from us. So, the Three Points must be retained. 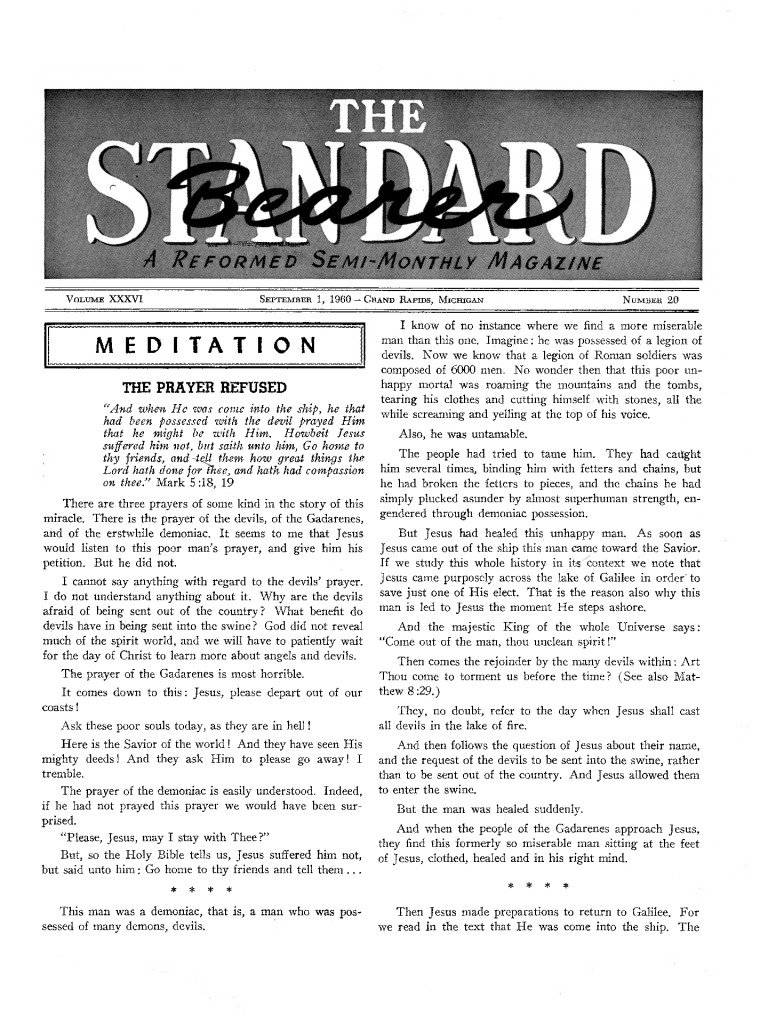