The Task Of The Ministry

The Task Of The Ministry

We concluded our previous article with the observation that to the task of the ministry of the Word belongs the labor of publicly calling upon the name of the Lord in behalf of the whole congregation. The minister is also a priest. He must carry the needs and the burdens, as well as the thanksgivings, of the congregation to the throne of grace. Continuous prayers and intercessions must be made, for, as we saw, this task is not an occasional% one but a perpetual one. The minister of the Word carries the church in his heart, .and, seeking her welfare, brings her continuously to God. The passage of the Word of God that is cited in this connection in the Form of Ordination of Ministers of the Word is I Timothy 2:1, 2. In this passage Paul exhorts Timothy to make “supplications, prayers, intercessions, and giving of thanks for all men; for kings, and for all that are in authority; that we may lead a quiet and peaceable life in all godliness and honesty.” Not infrequently this passage is used in an attempt to induce ministers of the Word to do what is directly contrary to their office and calling when they lead the congregation in public prayer. However, before we are ready to condemn the preacher for failing to mention the civic authorities, from the municipal to the national level, in the congregational prayer, let us be sure that we understand this passage of the Word of God.

We will not at this time attempt to explain all that is involved in this highly controversial passage. The following observations will suffice to make clear the specific charge given here to Timothy and to the ministers of the Word of God.

1) Let us keep in mind that whatever interpretation may be given to this text, the apostle Paul could not and does not enjoin ministers to do what is directly in conflict with the fundamental principle of prayer set forth by the Lord Himself in His prayer recorded in John 17 when He said: “I pray for them: I pray not for the world, but for them which Thou hast given Me; for they are Thine.” (vs. 17) No minister of the Word of God has the right to lead a congregation of God’s people in prayer contrary to this directive. This then positively excludes here a prayer for the reprobate world.

2) Those who would insist upon a literal interpretation of Paul’s words must also remember that they may not then limit the “all men” and “kings” to the rulers of our own country and exclude from their prayers the “kings and rulers” of nations that are opposed to us. This is often done, and then the impression is left that God’s blessing is sought upon American government while, by implication, His curse is invoked upon the government of other peoples. The evil of such a prayer ought to be evident to us.

3) If the limitation of the above paragraph is not made and the prayer is made for “all”, a careful analysis of such a prayer will reveal that it is nothing more than a seeking of the realization of sinful man’s idealism of a world-society in which all men coexist in a carnal peace and quietness. It denies the reality that God “has put enmity”; that He had made separation, and that, apart from the peace of the cross of Calvary, there is no peace. Ignoring the Scriptural truth that God never willed to save all men individually, this prayer proceeds from a thoroughly wrong premise and can only be uttered in the service of the cause of the anti-Christ. To God it is an abomination.

4) Let us remember that the injunction to pray for “all men, for kings and for all that are in authority,” must be understood in connection with the phrase of verse 2 , “that we (the church) may lead a quiet and peaceable life in all godliness and honesty,” and verse 4, “Who (God) will have all men to be saved and to come unto the knowledge of the truth.” And do not overlook verse 3, which says, “For this is good and acceptable in the sight of God our Saviour.” What is good in God’s sight? It is good that the church lives in all godliness and honesty. It is good that all men come to the knowledge of the truth; that all men be saved. Thus it is evident that Paul is not speaking of individuals but of classes of men that comprise the church of the living God. God has chosen His people from every station and calling in life, and for them (and not for the world) we must pray. But the question may be asked as to why the apostle singles out the particular class of “kings and those in authority?” Calvin, in reply to this question, says, “they were the classes that the church of that day under Roman persecution were most apt to hate and leave out of their prayers.” The same author adds, “that they may begin to impart to us those benefits of which they formerly deprived us.”

And so the minister of the Word must carry the church to God in prayer. He must lead the church, not to hate, but to pray for those that despitefully use them whether they are near or far, in positions of authority or in subjection, of whatever class they maybe. Praying for the church, he is not to seek carnal objectives but the promotion of her godliness and honesty, for in this way the church prospers in the grace of God. This is good and acceptable to God.

The third aspect of the minister’s calling delineated in the Form of Ordination is the task of administering the holy sacraments. We quote:

“Their office is to administer the sacraments, which the Lord hath instituted as seals of His grace: as is evident from the command given by Christ to the apostles, and in them to all pastors: ‘Baptize them in the name of the Father, and of the Son, and of the Holy Ghost.’ Likewise: ‘for I have received of the Lord, that which also I delivered unto you, that the Lord Jesus the same night in which he was betrayed, etc.’ ”

The Reformed position has always been that the administration of the sacraments belongs exclusively to the office of the ministry of the Word. We raise the question for sake of discussion whether this is necessarily the case? Are the Scriptural passages cited here conclusive proof for this contention? This would make an interesting and, I believe, profitable subject for discussion at an office-bearer’s conference or in our Men’s Societies. We might consider whether the command of Christ here is spoken to the apostles, “and in them to all pastors” or whether it is not proper to say that this command was given to the apostles, “and in them to the church;” If the latter be accepted; the responsibility of administering the sacraments rests upon the church, the institute as represented by the office-bearers, and not solely upon the pastors. This I believe is correct, and then why cannot the consistory delegate the authority to administer the sacraments to one of its elders if need be?

Furthermore, when a congregation is vacant, the elders are called up to perform other pastoral labor also. They must catechise the youth, call on the sick, do family-visitation, etc. Why then, if necessity dictates, can they not, by the authority of the church, administer the sacraments? We may also note here that in a certain sense there is an overlap in the threefold office of the church. Strictly speaking, the elders represent the Kingship of Christ and are the rulers of the church. Yet the ministers, who in the narrow sense of the word represent the Prophetic office of Christ, together with the elders rule the church and form its Council. Then, too, the deacons are the ministers of mercy as representing Christ’s priesthood, but the section of the Ordination Form for Ministers which we previously discussed indicates that the minister’s task includes the priestly function of prayer. If this overlap is recognized, I do not think any injustice to the command of Christ is perpetrated if, in cases of necessity, the elders of the church would proceed in the ministerial function of administering the sacraments. It would, in my judgment, be better to have a child baptized by an elder (really by the church through the elder) than to leave the child unbaptized, and it would be better to celebrate the Lord’s Supper with an elder officiating than to neglect the commemoration of His death by this sacrament which He has instituted for that purpose. If it can be shown that this “command of Christ” was given exclusively to the “apostles and pastors,” the current practice in our churches has Scriptural support. Otherwise, though we have no objection to the continuance of this practice as something that is generally acceptable, we cannot say that it must be so.

The final aspect of the’ minister’s calling deals with their duty to “keep the Church of God in good discipline, and to govern it in such a manner as the Lord hath ordained.” Before we proceed further to discuss this aspect of the minister’s calling, we like to have it observed that no one would conclude from this description of the calling of the ministers that they are to exercise discipline in the church alone, that is to say, without the elders. Such would not be according to the ordination of Christ, for, as we will see later in connection with the form for the ordination of elders, this task belongs specifically to them. Yet, here it is also included as part of the task of the ministers of the Word.

The Form for Ordination bases this upon several considerations which we only mention here and will discuss, D.V., more fully in our next article. First, there are the Words of Christ to His apostles that “whatsoever ye shall bind on earth shall be bound in heaven.” Next, the form says, “Paul will have the ministers to know how to rule their own house, since they otherwise neither can provide for nor rule the Church of God.” Thirdly, pastors in Scripture are called “stewards of God, and bishops, that is, overseers and watchmen, for they have the oversight of the house of God, wherein they are conversant.”

There is no question concerning the necessity of good order in the house of God. Paul says, “Let all things be done decently and in good order.” However, the question arises, is this the task of the ministers of the Word or of the elders or both? 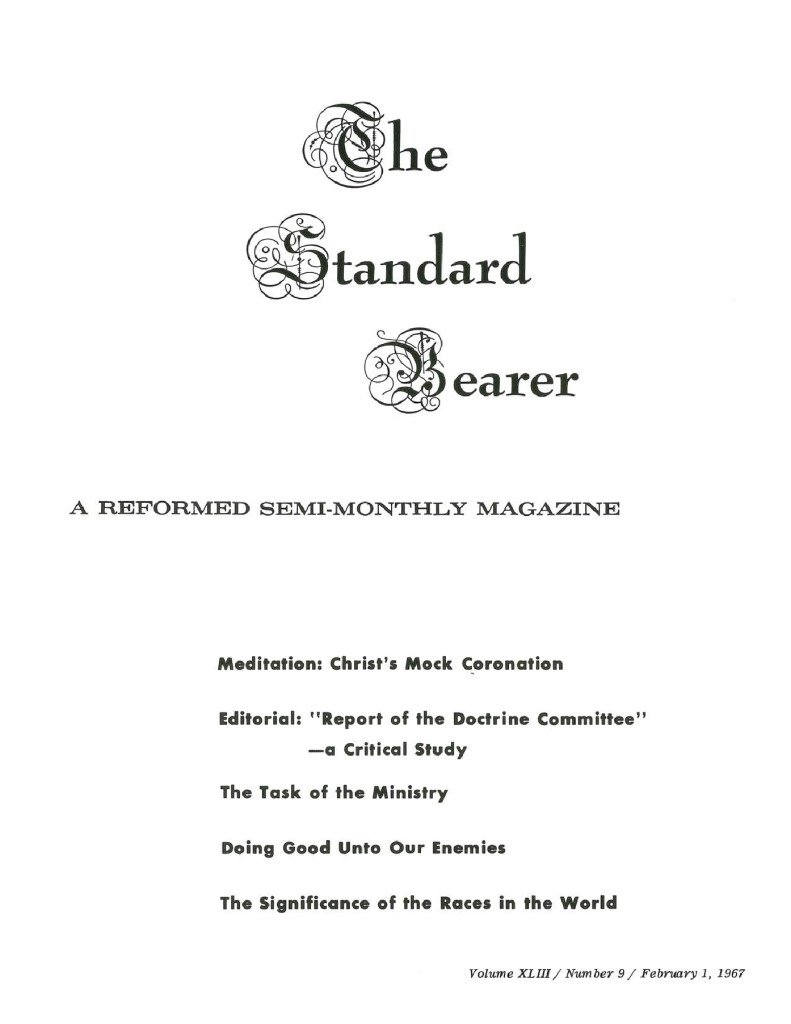