The Synod of 1951 continued

The Synod of 1951 continued

Tuesday morning and part of the afternoon were spent in reading the material regarding the Declaration of Principles. In our last number of the Standard Bearer it was pointed out that the Committee of Pre-advise which was given this material for consideration was divided in their advice. Synod first took up the advice of that part of the committee which recommended that Synod declare that the action of the last Synod was church-politically incorrect. In the discussion of this question the time of the Tuesday afternoon session and all the Wednesday sessions was taken up. During this time it became necessary for the Rev. Vermeer to leave Synod and Rev. J. D. De Jong took his place. During the Wednesday afternoon sessions the Rev. M. Gritters who had been ill for some time visited the doctor and was forbidden to attend any more of the sessions. Rev. De Boer, his next alternate, was summoned from Edgerton, Minn., and in the meantime Synod tabled the matter of the Declaration to take up routine matters. Rev. De Jong was elected assistant clerk in the place of Rev. Gritters.

Synod now took up the matter of finances. The requested subsidies were granted together with a request for an additional $600.00 from Randolph Wisconsin, and $800.00 to Orange City, Iowa whose support, through an oversight, had been cut off when their pastor left. The congregation of Chatham was given permission to ask for collections in classis West with a view to their obtaining a parsonage. The reports of the auditors and the treasurer were approved. The assessments were reduced from $88.50 per family to $26.50 per family, due to the lessened need of the Mission and the balances on hand in all the funds, Synod also went on record as favoring the policy of two missionaries and in case we obtain a second then the Fuller Avenue congregation will be requested to assume his support.

It is next decided to raise the salary of our missionary by $500 per year. In the case of Rev. H. Veldman it is decided to pay his salary for one year together with his house rent and to request the Fuller Ave. congregation to make him emeritus minister of Fuller Avenue.

It is decided to send a letter of appreciation to Mr. Fred LaGrange who has been our treasurer for 25 years.

Synod now takes up the matter of relations with other churches: First of all it is decided that the Committee for Correspondence with other churches draw up a constitution including terms of members and present it to the next Synod for approval.

With respect to the Reformed Ecumenical Synod it is decided to refer this matter back to the committee for Correspondence in order that they may present Synod with a well-motivated advice in 1952. This Ecumenical Synod does not meet until 1953.

Regarding the proposed Reformed Missionary Council Synod decides to instruct our Committee for Correspondence to take part in the preliminary work toward the establishment of such a council without definite commitment regarding membership.

Friday morning Synod again takes up the discussion of the Church Political question with respect to the declaration. Friday afternoon it was put to a vote and the motion to declare the action of the 1950 Synod church politically Incorrect fails. Three ministers and three elders ask to have their stand on this matter recorded.

Synod then decides to adjourn until the last Wednesday in September in order to take up the unfinished work of the declaration at that time. 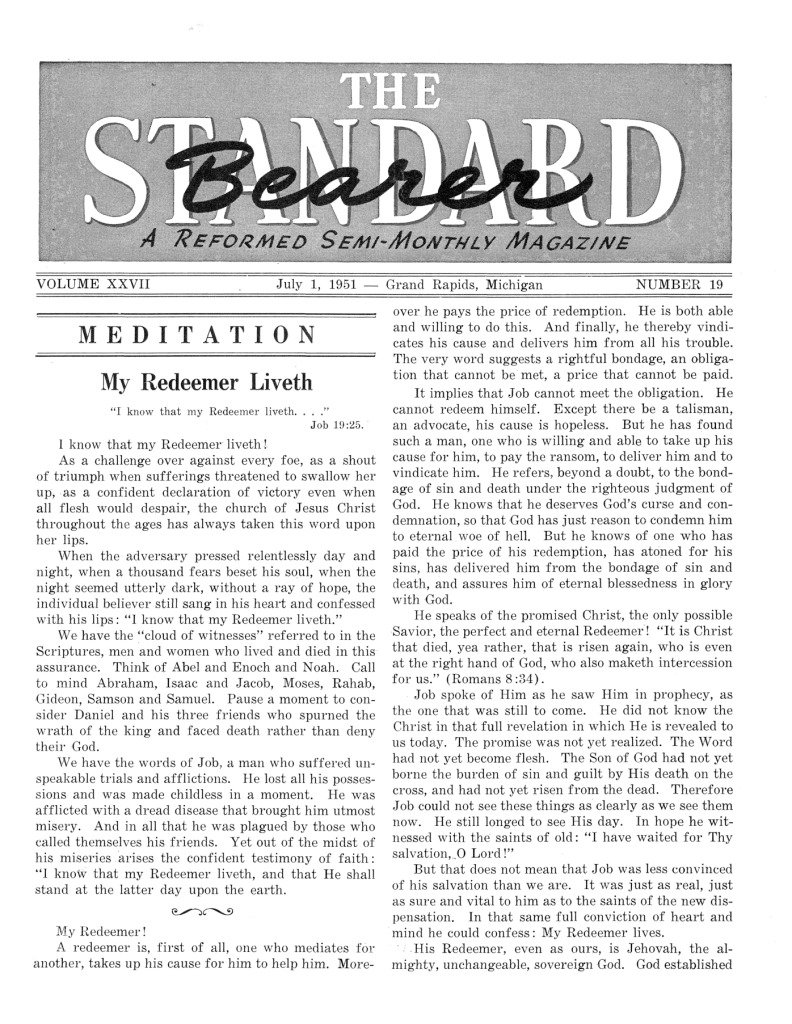