The Sword and the Cause of Christ (concluded)

The Sword and the Cause of Christ (concluded)

“…the cause of Christ is never, ever advanced by the sword.”

The statement above (found in the November 1, 2015 issue of the Standard Bearer, in the editorial “Learning from the Medieval Church’s History”) is the focus of a disagreement between Mr. Archie P. Jones and myself. Mr. Jones sent in a cordial letter and position paper objecting to this view. I desire to answer in a cordial manner, but also to convey the seriousness of the issue.

In the last editorial, it was noted that God has indeed used the power of the sword for the good of the church in various ways, even as God rules over all so that all things work together for the good of God’s people (Rom. 8:28). However, it is our contention that the use of physical power has not advanced the cause of Jesus Christ.

Mr. Jones makes the concept of “the cause of Christ” exceeding broad by referring to II Corinthians 10:5—“Casting down imaginations, and every high thing that exalteth itself against the knowledge of God, and bringing into captivity every thought to the obedience of Christ”—insisting this is to be taken in the broadest sense. He writes “This necessarily includes every thought, word, and deed; it necessarily includes all areas of life, thought, and action; individual life and corporate life; life in church and life outside of church; life in one nation or among every other people.”

Christ Himself told His disciples to sell their garments and buy themselves swords (Luke 22:36), so it is obvious that He considered the sword—used in self-defense and defense of one’s family, one’s Christian brothers and sisters, and therefore the church—to be useful in advancing…the cause of Christ. As followers of Christ went into the world, protected by their swords, they would advance the cause of Christ by spreading the Gospel in its fullest sense, teaching the nations to do all that He has taught us to do.

First, in response, let it be said that the Bible has no record of the apostles or evangelists of Jesus Christ going out “into all the world…” with their swords. Nor is there any biblical record of any of Jesus’ missionaries fighting when they were opposed, imprisoned, beaten, or put to death. The opposite is recorded—submission to evil treatment for Jesus’ sake.

But more importantly, the logical end of this argument is disquieting. If every thought must be made captive to Christ, and if the preaching of the gospel is not accomplishing this, why not use the sword of the magistrates for the advance of the gospel? And why should not a “Christian” nation subdue a “pagan” nation in order to stop the blatant disobedience to Christ? As noted in the previous editorial, Mr. Jones nowhere calls for this, and I am at pains not to impute this to him. Only, I point it out as a logical implication.

In fact, history has demonstrated this real possibility. As great a theologian as Augustine fell into this error. Early in the fifth century, Augustine (and the church of his day) advocated using force against the Donatists to compel them to leave their churches and come to the one true church, as Augustine put it. The churches of North Africa sent a request to Emperor Honorious, and he obliged them, banning the Donatist churches and adding his muscle in an attempt to eradicate this movement (which attempt failed). Centuries later, the Romish church went a step farther. Using Augustine’s ideas, the medieval church justified the torture and execution of heretics—ostensibly for the sake of their souls. In such a spiritual climate, it was possible for the church vigorously to promote sending out “Christian” armies to overcome the infidels in the many pointless, and sinful, Crusades.

But is any of this justified by what Paul writes in II Corinthians 10? Are we to make thoughts captive to Christ… using a gun? Weapons of war may subjugate a people, may subdue them physically and bring fear and terror, but physical weapons will not make captive any thoughts. The use of physical force will utterly fail.

Besides, it is entirely the wrong means for subduing thoughts. Weapons of war are not God’s means to produce the faith that makes every thought captive to Christ. Notice what Paul writes in the context. “For though we walk in the flesh, we do not war after the flesh: (For the weapons of our warfare are not carnal, but mighty through God to the pulling down of strong holds;)” [II Cor. 10:3-4]. The weapons of the great apostle to the Gentiles were not carnal (a sword), but spiritual, namely, preaching and Christian discipline. Notice also how the inspired apostle began the chapter: “Now I Paul myself beseech you by the meekness and gentleness of Christ…” (v. 1). Clearly, the sword is the last thing on Paul’s mind in his determination to make every thought captive to Christ.

In reality, it would be sin to use guns to seek to advance the cause of Christ. Although the Lord did once give His disciples the somewhat obscure instruction, “he that hath no sword, let him sell his garment, and buy one” (Luke 22:36), this was not instruction to use the sword to advance the gospel. When Peter tried to use the physical sword even for defense, Jesus forbade it and rebuked His beloved disciple—“Put up again thy sword into his place: for all they that take the sword shall perish with the sword” (Matt. 26:52).

History has noted the failure of the sword to advance the cause of the gospel. The Crusades not only failed, they made Christians utterly loathsome and gave “justification” to the Muslims to attack Christians from that time forward. The Reformation in France flourished under persecution. When the church took up the sword, the decline began. Eventually, the Huguenots lost their political and military battles, and the Reformed church in France became virtually extinct. The power of the church is the preaching, not the sword. Her defense is the Word, not physical weapons.

Mr. Jones does bring up a part of history that might seem to be an exception. He writes:

Was the cause of Christ not advanced by the Dutch resisting the attempts of the Spanish to massacre the Reformed during the Dutch War of Independence? Would it have been spiritually, morally, and practically better for the Reformed Dutch to throw down their arms and let themselves, their families, and their Reformed brothers and sisters be massacred by the Spanish troops?

I grant that this history is difficult to sort out. In a complicated course of events, the region of the Lowlands fell into the hands of Philip, King of Spain. Under the rule of his father, Emperor Charles V, the Netherlands experienced decades of laissez-faire rule, being left virtually alone so long as they produced the taxes needed to finance Charles’ military excursions. Under King Philip, all this changed. He began to oppress the Netherlands as a people, and violently to persecute the Reformed in the land. Philip wrote to the pope in 1566: “Rather than suffer the least damage to religion and the service of God, I would lose all my states and a hundred lives, if I had them: for I do not propose to be ruler of heretics.”

This history does reveal that the sword defended the land from Spanish, Roman Catholic oppression. In the providence of God, the Reformed churches escaped the obliteration that King Philip sought. Under the new provincial governments, Reformed churches had the freedom to develop in the Netherlands.

But the Reformed churches paid a heavy price for the entanglement of church and state. The benevolent state financed the churches and their schools. But control of the purse ultimately is control of the institution. Government involvement soon became a force for the devil to do significant damage to the Reformed churches of the Lowlands. When a local consistory convicted a minister of heresy, the government in many cases did not allow his deposition, but rather continued to pay the man until he died. No synodical gatherings were allowed without government authorization. The Arminian controversy raged in the Reformed churches for years before the national Synod of Dordrecht was finally called to deal with the heresy. And it would be over 200 years before the government allowed another national synod. In that long period the Reformed churches apostatized. Eventually, King William took the churches under the complete domination of the state, and the government-approved apostasy rapidly advanced until the Lord reformed His church in the Afscheiding (Secession) of 1834.

The Bible and history clearly testify that the cause of Christ is not advanced by the sword. Christ Jesus is King over all the earth, and He rules sovereignly over the nations. But His kingdom is not of this world. It is a heavenly and spiritual kingdom. It is advanced by the unstoppable spiritual means of the preaching of the gospel. No sword advances that kingdom. But no sword can stop it either.

That raises an additional concern in today’s increasingly violent world, a concern connected with self-defense. A Christian may defend himself against assault from a thief or a murderer. A church may prepare itself against attack from the deranged, perhaps drug-crazed murderers that America has experienced in the last few years. Many Christian churches have taken precautions against this, making plans that include armed guards or members who are armed, ready to stop such evil intruders. Many Protestant Reformed churches have the same contingency plans. Love for the brother and sister, and the right to defend oneself from attack justify this.

But where does one draw the line in regard to attack, whether it be personal or ecclesiastical? Jesus’ rebuke to Peter (“Put away thy sword”), the disciples’ bearing of physical beatings for Jesus’ sake, as well as Paul’s obvious willingness to endure astounding suffering— physical beatings, imprisonment, and death—for the sake of the gospel, give important instruction to the church today. Christians are not to “defend” themselves or their churches from the evil persecutors. The day of physical persecution is coming to America. In many places of the world it is already reality.

Do you see the difficulty? In all free and democratic countries dwell people (terrorists, or thieves, or drug-crazed citizens) intent on doing harm to a Christian congre gation on a Sunday, as they might do to any gathering of defenseless people on any day of the week. And yet, there are also those who desire to attack a Christian church because they hate Christ, and, thus His church. Using a gun to defend a congregation against terrorists, thieves, or drug-crazed intruders who intend to kill indiscriminately is one thing. To take up the gun to stop persecutors of the church of Jesus from killing Christians—that is quite another matter. Currently, the laws and police forces of America and of most democratic countries protect the church from these attacks. When that changes, the attitudes of Christians must adjust. We must think no longer in terms of defense of life. Rather, we must be ready to suffer for Jesus’ sake.

Individual Christians and consistories will need to consider these matters carefully. But Christians must not think in terms of guns and physical force to escape the coming tribulation. This is Jesus’ promise: “For then shall be great tribulation, such as was not since the beginning of the world to this time, no, nor ever shall be” (Matt. 24:21). And His instruction? Never is it: Get physical weapons and defend yourselves. Rather, it is “Flee.” And, “rejoice, inasmuch as ye are partakers of Christ’s sufferings; that, when his glory shall be revealed, ye may be glad also with exceeding joy” (I Pet. 4:13). 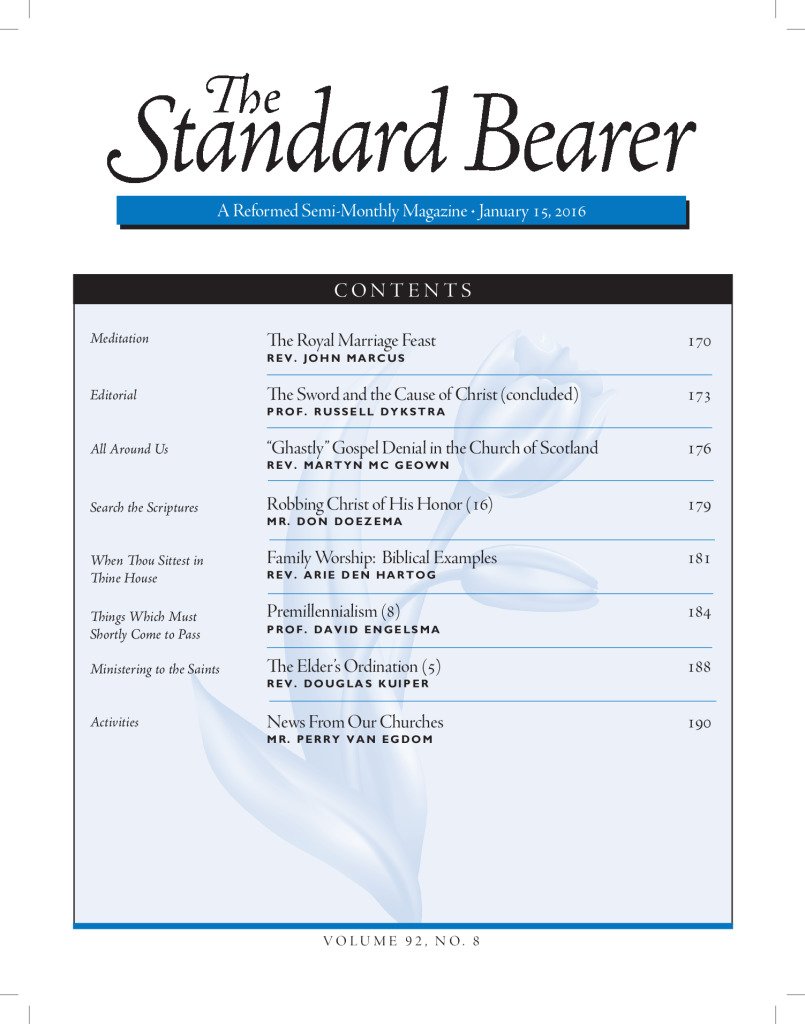