The Subjects of Baptism (continued)

The Subjects of Baptism (continued)

Two questions remain for us to answer in regard to Article 56 of our Church Order. You will recall that this article deals with the sealing of the covenant of God unto the children of Christians by means of the sacrament of baptism. We have pointed out that the administration of this sacrament should take place as soon as feasible after the children are born. There should be no unreasonable delay due to certain matters of superstition. We have also discussed at some length various matters concerning the proper subjects of baptism and have considered some of the problems that arise in this connection due to irregularities in our sinful life. We now have to discuss the questions, “By whom and where must this sacrament be administered?”

The Reformed position in regard to the first of these questions is that, in the final analysis, it is Christ Himself Who administers the sacrament and, therefore, it is proper that baptism be administered only by those who are commissioned or authorized by Him to do so. In John 4:2 we find that Jesus delegated this task to His disciples and then after the resurrection He commissioned them to “Go”, therefore, and teach all nations, baptizing them in the name of the Father, and ‘of the Son, and of the Holy Ghost” (Matt. 28:19). Since then the preaching of the Word and the administration of the sacraments go together, it is a most logical and correct conclusion that these two things should be done by the same persons. The church, through the office of the ministry of the Word, administers the sacraments. No one else is authorized to do so. This position is the position of our Church Order as is implied in the article we are discussing and is’ definitely stated in Article 3, “No one, though he be a Professor of Theology, Elder or Deacon, shall be permitted to enter upon the Ministry of the Word and the Sacraments without having been lawfully called thereunto.”

This position has not always been consistently maintained in the Reformed Churches. In 1578 the Synod of Dordt held that if an elder, upon the authority of a consistory or church, had administered baptism, such baptism was to be considered valid since such an elder in a way had a call for this administration. Though this practice has, therefore, been allowed, it was not encouraged and the same Synod decided that other churches and consistories should not follow it.

This question is important because it involves the deeper mattes of what constitutes a valid baptism. The Reformed position does not recognize baptisms that are performed by private individuals. This, of course, brought the Reformed Churches almost immediately before the question as to whether or not they would recognize baptisms performed by the Roman Catholic Church. Here too, as you know, the sacrament is administered not only by the priests but in some instances by monks, midwives and doctors. The Church Order Commentary informs us that, “The Synod of Emden, 1571, held that those who had been regularly baptized in the Roman Church did not have to be baptized once again, fearing that the Roman Baptism was of no value. But our fathers doubtlessly felt that although the Roman Church was filled with error, that yet it was a Church of Christ in essence, and that therefore its Baptisms were valid. If therefore Baptism was administered by an authorized priest, with water and in the name of the Triune God, then re-Baptism did not take place. Even the Baptism of ‘vagabond priests,’ constantly traveling from place to place, was held to be valid (Synod of Middelburg 15Sl) inasmuch as these were officially called. But the Baptism of monks was considered to be invalid for they have no charge to Baptize. Even ’emergency Baptisms’ administered by midwives, doctors, etc., were usually held to be valid because the Roman Church charges individuals to Baptize a child which is about to die. Whether the Reformation Churches were justified in acknowledging even these latter classes of Baptisms is indeed a question.”

Although each case must be determined on the ‘basis of its own merits and circumstances, it may be said in general that Reformed Churches recognize baptisms that conform to the following standard or meet with these requirements:

(1) If the baptism was administered according to the institution of Christ (the rightful element, water, not wanting).

(2) If the baptism was administered in the Name of the Triune God (Father, Son and Holy Spirit).

(3) If the baptism was administered in the assembly of believers which assembly is in principle a church of Christ.

(4) If the baptism was administered by one who was properly authorized by this assembly or Church to administer the sacrament.

Baptism by groups or individuals that are disassociated with the essence of Christianity, deny the Trinity, etc., are not to be recognized. If such persons would seek affiliation with a Reformed Church, they would have to be baptized. We do not say re-baptized but simply baptized for what was administered to them previously is in actuality no baptism at all.

The second question we raised earlier had to do with the proper place of the administration of baptism. This question arises from the practice of the Roman Catholic Church which allows baptisms in the home and hospitals, etc. This practice is sometimes desired by people of Reformed persuasion. They ask why it is not proper to have baptism (and even more so the Lord’s Supper) administered outside of the church in cases of necessity? This question is understandable. Believing parents, for example, who seriously and earnestly desire to have baptism for their children, receive a child that is very ill and find it impossible to take such a child to church. What can be done? Why can’t the minister and elders of the church come to the home and baptize such a child?

In the past this has been allowed but even those ecclesiastical bodies that decided in favor of it were not too sure it was the proper thing. The Wezelian Convention in 1565 advised to grant such requests for the time being but held that such infants should be baptized in the presence of some believers who could be present. Then in 1574 the Synod of Dordt decided that henceforth children should be baptized only in a regular church service.

The question arose again at the great Synod of 1615-19. Here it was decided that baptism might be administered at home to children and adults who were sick and still unbaptized if circumstances were very urgent, and then only with the knowledge and in the presence of the consistory; this synod also permitted the baptizing of condemned criminals awaiting execution in jails, but only upon advice of the delegates of Classis. The same Synod, however, may have feared the ill effects of these decisions for they decided not to publish them if the Acts of Synod were published. It is, of course, obvious that such decisions are not in accord with the Church Order.

Article 56 specifies very clearly that baptism is to be administered “in the public assembly.” To this is added, “where the Word of God is preached.” To this may be added that Article 35 of our Confession of Faith which speaks of the Lord’s Supper contains in it the statement that, “we receive this holy sacrament in the assembly of the people of God.” Both the Church Order and the Confessions, therefore, maintain the position that the sacraments are to be administered only by the church and in the meetings for public worship. Undoubtedly the motivating factor in this position must be found in the fact that the preaching of the Word and the administration of the Sacraments belong together. Since the sacraments derive their meaning and significance from the Word, it is imperative that they be administered only where the Word is preached. This is made plain in the following quotation from Baptized Into Christ by Rev. H. Hoeksema. 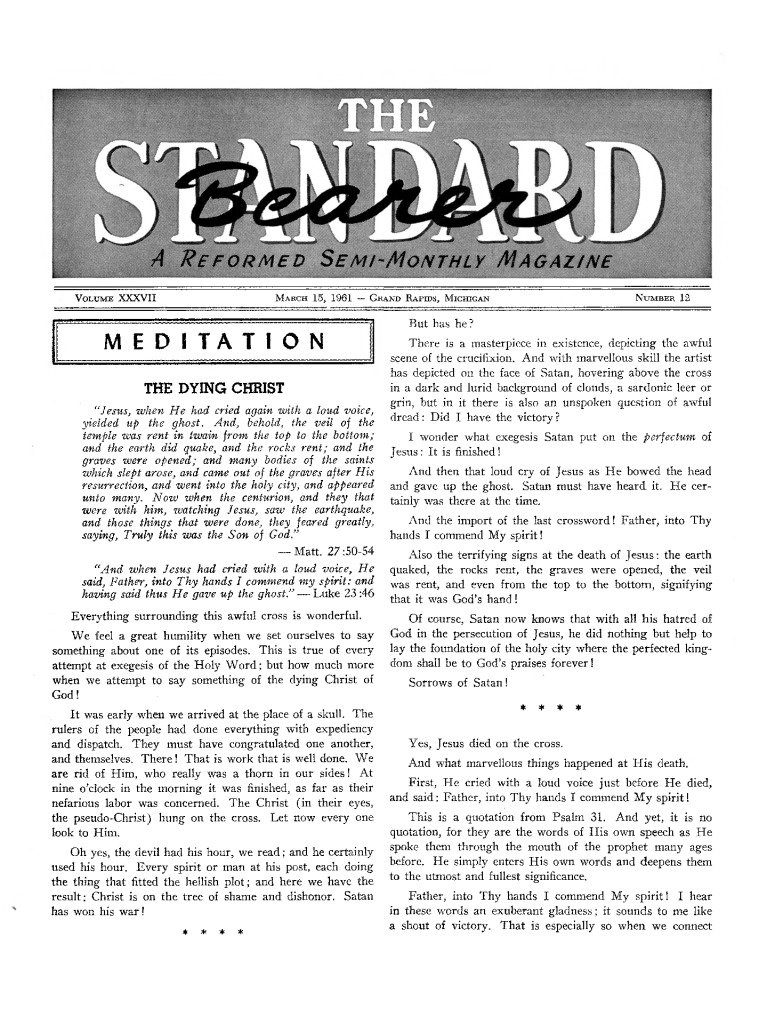