The Spirit of this Age (II)

The Spirit of this Age (II)

“…but unto them that are defiled and unbelieving is nothing pure; but even their mind and conscience is defiled. They profess that they know God; but in works they deny Him, being abominable, and disobedient, and unto every good work reprobate.”

We continue our discussion of the spirit of this age which we have designated as the absence of all shame. We have implied that there is an internal aspect to and an external evidence of this “spirit.” The internal aspect involves the hardening of the conscience. Men grow callous to every prick of conscience. Men do not feel demeaned or debased in the performance of sin, not even when they know that others know them for what they are, slaves to various passions. Nor does man find at all repulsive the observation of gross sins as practiced by others. Rather he is attracted to and entertained by them. Confront such men with their own iniquities, and they are not touched; point out to them the immoral behavior of others, and they ask blandly, “But what is wrong with that?” The conscience is seared, callous.

The external evidence of this lack of shame is gross, public immorality, which we can label “lawlessness,’ ‘ or in the words of Christ Himself, “Abounding lawlessness” (Matt. 24:12). Lawlessness is, in a word, defiant, flagrant disobedience. Aboundinglawlessness puts it on a large scale, dominating every segment of society. This lawlessness refers not merely to acts of civil disturbances, such as rioting and violent crime, but this lawlessness encompasses every form of immorality and disobedience to God’s holy laws. Being without shame, men know no law. God’s laws of morality and subservience to the authorities of home, the church, and of state are ignored and even flagrantly defied. This is not because men are ignorant of them, but it is because men brazenly hold the laws of God in open contempt. When such a point is reached it can be said that men are without shame. They become exhibitionists, looking for an audience to applaud their sin.

Our position is that there are signs that this “spirit” now rules society. We live in a time which resembles the days of Lamech before the flood, and of Sodom and Gomorrah before the brimstone.

When we point to the immoral excesses which infect our society we are not suggesting that sins which are committed in our day were unheard of in days gone by. Hatred and perversion have always characterized and warped fallen man. And that has always revealed itself in man’s actions. We are not romanticists who yearn for the so called “good-old-days.” We have no desire to turn the clock back. Yesteryear led but to today. For every sin man commits today, its parallel can be found in days gone by—everything from gluttony to murder, from insurrection to sodomy. Fallen man has never been free from these impulses or practices.

Yet there is a difference between our age and yesteryear. Strikingly, the world itself recognizes that. Significantly, they speak of the “new morality.” By this term unbelieving society indicates that the change of which we have been speaking has not gone unnoticed. Even the defiled and unbelieving recognize that the moral-ethical atmosphere has changed.

From a certain point of view there is no term so poorly adapted to indicate this change as “new morality.” What society is referring to is not morality, but immorality, and essentially it is not new but old, as old as fallen man and spiritual death. But the term will serve. By it society means that old norms which governed what was acceptable behavior are outmoded. New standards are to be established by which right and wrong, good and evil are to be judged. An example would be the contemporary sexual permissiveness which makes public semi-nudity and common-law marriage lawful, and which declares that sexual perversion is normal.

Now what is new is not these types of fornication. Art shows that man has long been fascinated with nudity, and history tells us that much fornication has been winked at, especially by the nobility. What is new is not the fact that men can be found overturning God’s laws and demonstrating a certain boldness while doing so (though never on such a grand scale as in our day). What is astonishing is that not only do men defy all authority as they break the law, but society asserts that this new lawlessness is law—it is right, it is good, it is necessary if the old wrongs are to be righted. That has never occurred before. Never before has society made an effort to establish that immorality is moral, or declared lawlessness lawful (e.g., legalized abortion and labor strikes). Always mankind has recognized that lawless behavior was a deviation, and that it must not have official approval or legal sanction, or all of society would be sucked into a raging whirlpool and disintegrate. But contemporary society has taken the bold, self-destructive step to define unrighteousness as law and morality. What can be clearer than man’s insistence that the worst criminals have rights! When has society ever guaranteed convicted criminals’ rights? Never until today. Such is the spirit of this age; sin is legal, and law is used to justify man’s absence of shame.

What is especially reprehensible is that this “spirit” dominates not only society in its life and laws, but, as well, it has infected the historical Christian church down to its roots. Lawless, depraved behavior is sponsored by the nominal Christian church. That has never before occurred either. The foremost voice in blessing the evildoer in the way of disobedience has become the church. That she is guilty of this can be shown. She supports dissatisfied workers who strike and who may even turn to violence. These lawless ones remain members in good standing. Spokesmen for Christian churches encourage and justify civil disobedience by pointing the finger here, there, and everywhere but at the real culprits of the crimes.

The church ordains not only women into the special offices (thereby showing callous disregard for clear Scriptural injunctions), but also self-advertised homosexuals. Such, says the church, are worthy examples of Christ for His flock, and through such Christ is pleased to speak His gracious, saving word, supposedly. We are not to judge them, though they show no signs of repentance or shame. They are not guilty of sin, but only have a different life-style. The guilty ones, we are told by preachers, are the ones who make these people feel guilty. So the church seeks to ease the conscience of the guilty, and condemns the righteous. This is done, mind you, in the name of the Lord of righteousness and truth. Those who cry out against such abominations are labeled as narrow-minded bigots and as the modern pharisees. What is this world coming to? It is clear: the End.

That God loved sinners, and that Christ died for the ungodly is certainly true. But that He approves of sin? That He says that good is evil and evil is good, that is the gospel? God forbid. What shall we then say? The words of Titus 1:16 apply. “They profess that they know God; but in works they deny Him, being abominable, and disobedient, and unto every good work reprobate.”

The immoral depths into which western civilization has plunged herself in all of her institutions and practices astounds. Yet for the student of the Bible it ought not come as a complete surprise, as an unexpected turn of events. Scripture plainly foretells of this state of affairs. The “spirit” governing society of which we have been talking is but the coming to surface of another “spirit” which has long been working in this world, namely, the spirit of Anti-Christ.

Having warned the church against worldliness the Apostle John writes, “Little children, it is the last time: and as ye have heard that anti-Christ shall come, even now are there many anti-christs: whereby we know that it is the last time” (I John 2: 18). And in this same epistle the Apostle speaks of “that spirit of anti-Christ, whereof ye have heard that it should come; and even now already is it in the world” (I John 4:3).

Significant, too, are Paul’s words of warning in II Thessalonians 2:7-9, “for the mystery of iniquity doth already work: only he who now letteth (preventeth – K.K.) will let, until he be taken out of the way. And then shall that Wicked (lit. – Lawless One) be revealed.. .Even him, whose coming is after the working of Satan with all power and signs and lying wonders.”

Throughout history that sinister, monstrous spirit of Anti-Christ, which finds its source in hell, has been working in society. It has not been fully revealed as yet, but, though submerged, at times it has stirred up society to such frothings that its strivings can not be mistaken. Meanwhile, it lurks just beneath the surface, waiting for the right “atmosphere” into which it can emerge, show its hideous strength, and be universally acclaimed and adored.

It seems evident that it is this very absence of shame which is what the reprobate, anti-Christian spirit has been striving for millennia to engender. Such a “spirit” (attitude) would be in complete harmony with a spirit spawned by Satan in the abyss of hell, namely, one which completely despises God’s laws. Anti-Christ would be fully at home in a society dominated by this absence of shame. They would be of the same lawless spirit. Such a society would be ripe for his appearance.

It is the very absence of shame which works to the coming Anti-Christ’s advantage. Such a spirit paves the way for him. Men, having no shame, sow the wind, and they shall reap the whirlwind. It is inevitable that by such lawlessness as we see about us the fabric of society shall be ripped to shreds, or, to use a prior figure, that it shall disintegrate as in a raging whirlpool. For who will save society as it self-destructs? Who will throw it the lifeline? Who else but Anti-Christ! The Lawless One will impose his law upon society, calling it Divinely-ordained law. Society will gladly grant him absolute power, exchanging her freedoms for security. And, horror of whores, the church will proclaim this one “Savior.”

We too must be warned against being contaminated by the pernicious spirit of our age. It threatens the very life of our churches and families. We are those whose conscience must remain undefiled. We shall focus on how these matters directly concern us in the next article, D.V. 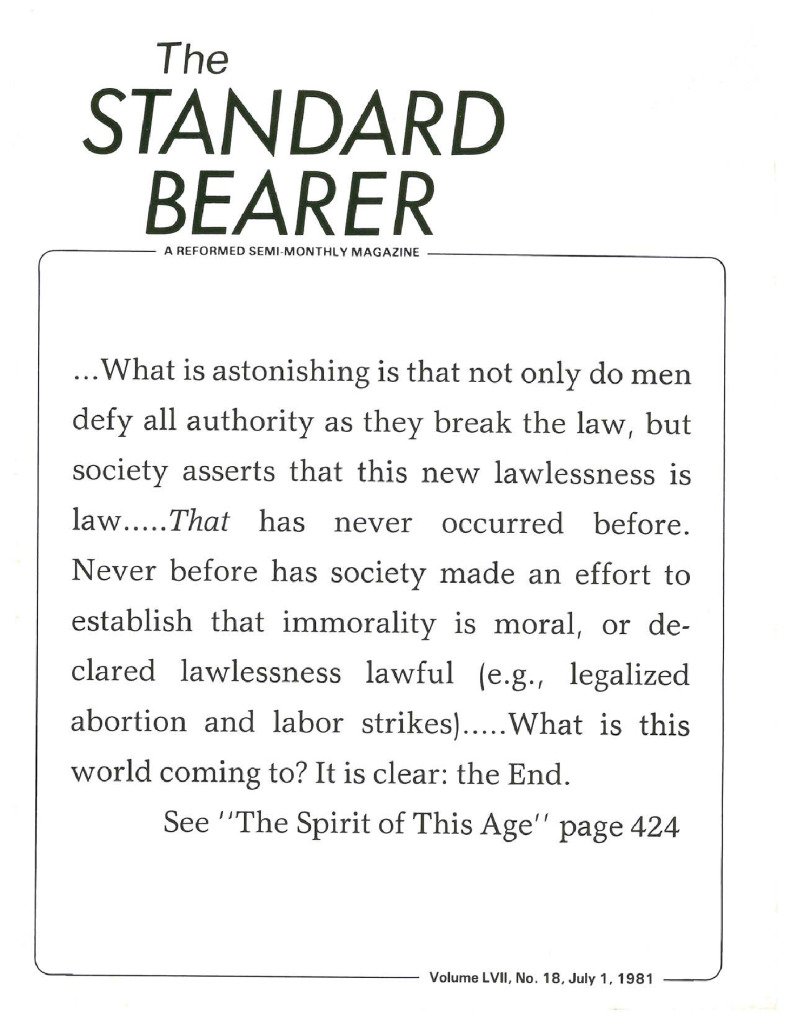