The Spirit of Ahab’s Reign

The Spirit of Ahab’s Reign

“And Joshua adjured them at that time, saying, Cursed be the man before the Lord, that riseth up and buildeth this city Jericho: he shall lay the foundation thereof in his firstborn, and in his youngest son shall he set up the gates of it.” Joshua 6:26

“In his [Ahab’s] days did Hiel the Bethelite build Jericho: he laid the foundation thereof in Abiram his firstborn, and set up the gates thereof in his youngest son Segub, according to the word of the Lord, which he spake by Joshua the son of Nun.” I Kings 16:34

What were some of the wicked things that King Ahab did? First, Ahab took Jezebel for his wife, a woman thoroughly committed to the worship of Baal. Then, following the example of his wife, Ahab himself began to worship Baal. Still more, Ahab even went so far as to build a house and an altar for this idol god right in the capital city of the ten tribes of Israel, so that all Israel might worship Baal with him. These are only a few of the wicked things that King Ahab did. King Ahab also made life very miserable for the faithful prophets of the Lord.

As God’s Word describes for us the sins of King Ahab, it suddenly mentions another man in Israel, and what he did during the days of King Ahab: “In his days did Hiel the Bethelite build Jericho.” These words are added to the passage in such a way that they should be understood as presenting the great extent of Ahab’s development in sin. These words capture for us the spirit of Ahab’s reign: complete hatred of and opposition toward the Word of the Lord.

These words also capture for us the spirit of our own age!

The great sin of Hiel was this: he tried to silence the Word of the Lord.

In order to see that, we must go back in history, around 520 years, to the time of Joshua and the destruction of Jericho. We recall how Jericho fell. However, after the city was utterly destroyed, Joshua spoke these significant words: “Cursed be the man before the Lord, that riseth up and buildeth this city Jericho: he shall lay the foundation thereof in his firstborn, and in his youngest son shall he set up the gates of it.” And in these words, it was not just Joshua speaking, for Joshua was the servant of the Lord. In these words, God Himself was pronouncing a curse upon whomever would rebuild the walls of Jericho. And now, during the reign of King Ahab, some 520 years later, the wicked man Hiel decided to ignore this curse of God.

Why would Hiel have done such a thing? Why would he ignore God’s curse?

One thing that we ought to bear in mind is that Hiel would not have taken on such a project on his own. In fact, we can be quite certain that King Ahab himself was deeply involved in this work. The situation was most likely this: Ahab wanted the walls of Jericho rebuilt, and he hired Hiel to be the architect and project manager of this work. That this was probably the situation is understandable when you bear in mind that these were the walls of an entire city that Hiel was going to rebuild—a job that would certainly require the support and funding of the king himself. Also, when you look at the geographic location of Jericho, you realize that Jericho was very close to the Jordan River, right at the edge of Israel’s borders. It was therefore a very significant city for travel, for trade, and for protecting Israel’s borders—something King Ahab would have been concerned about. It is safe to say that Ahab’s own orders were what motivated Hiel (a man who must have prized the king’s favor above God’s favor) to take on this work of rebuilding Jericho.

When we look at this event, however, there is something more going on. And to see it, we need to ask ourselves this question: “Why did Joshua, and why did God Himself, place this curse upon Jericho’s walls in the first place? Why was God against having Jericho rebuilt?”

To answer that, we must first recognize that in the curse Joshua spoke, God was not forbidding that anyone could ever live in the city again. By the time of King Ahab, people had been living in Jericho for a long time already (see, for example, II Sam. 10:5; Jud. 3:13ff.). In fact, by Ahab’s day, the city had probably become a very great and important city. Rather, God’s curse upon Jericho was that whoever fortified the city—whoever cleaned up those fallen walls and rebuilt new walls—that man would lose his eldest son at the time of laying down the foundation of the wall, and he would lose his youngest son when the gates were being put in place. That is implied in the language of the curse itself.

But the question is still there: why did God make this curse concerning Jericho?

The answer is this: God wanted the city of Jericho, and those broken walls, to be a constant reminder to all the people of the great victory God had wrought for Israel against Jericho. Those city walls, heaped up in ruins, were a constant witness over the last 520 years that salvation was by God’s grace and God’s power alone. Those broken walls were a memorial of the Lord’s salvation. In a certain sense, those broken down walls of Jericho spoke the Word of God—and they spoke to everyone who saw them.

Those walls spoke, first, of God’s judgment and punishment. They told everyone that God will destroy all those who stand in the way of His people entering into their inheritance. They witnessed that God laughs at the supposed strength of men, and that with the mere shake of His hand, God brings down the kingdoms of men upon their own heads. They testified that judgment is real, and that the days of unbelievers are numbered.

And therefore, when Hiel and King Ahab went to work cleaning up that pile of rubble and rebuilding Jericho’s walls, they were putting their efforts towards silencing the Word of God. With their actions, they were saying, “No more! No more will God speak through these stones. No more will we hear of God’s judgment upon the wicked. No more will we hear of God’s gracious acts to those who lived by faith. We refuse to hear it any longer.” And instead, what they were saying was this: “We will put our faith in strong walls, in weapons, and in man’s power—just as Jericho of old did. We will put our confidence in the arm of flesh.”

This is the spirit of our age too, is it not?

It is the spirit of the world, to be sure. We see it all around us.

It is the spirit of the apostate church as well, who use the same reasoning that King Ahab must have used in this situation: “Joshua’s curse upon Jericho’s walls? That was so long ago! It is outdated! No longer do those words apply! We live in a different day, in a different age! And besides, it was only a mere man who spoke those words! What did Joshua know?”

What was the root cause of Hiel’s actions?

The root cause of Hiel’s actions was not ignorance. The fact that those ruined walls had not been touched for 520 years, despite the city’s geographical and political significance, demonstrates that this curse had been well-known. And you can be sure that also Ahab and Hiel knew about this curse.

The root cause was this: sin had grown and developed in the ten tribes of Israel. The people were becoming hardened in their sin. And it came to the point where now, with King Ahab, the people were even willing to challenge the very curse of God!

What we have with Ahab’s sin is a development in sin’s hostility towards God’s Word. With King Ahab, we no longer have only the ignoring of God’s Word; we now also have active opposition against God’s Word. God’s Word was so hated among the wicked in Israel, that God’s Word must be silenced even through the rebuilding of Jericho’s walls. God’s Word must not even be allowed to exist anymore! It must be man’s voice, and man’s voice only, which is heard from the city of Jericho.

We have the same thing today, do we not? In the world. In the apostate church. Yes, it is what lives in our own sinful hearts as well. It is not ignorance, but rebellious opposition to God that so often explains our own sinful actions.

The events took place just as Joshua’s curse had declared. The cost involved in trying to silence God was this: Hiel lost all his sons. The idea of the passage is this: the man who rebuilt the walls of Jericho would lose all his sons, starting with his oldest and ending with his youngest. The man’s name would be cut off from God’s covenant people. It was a high price to pay. Yet wicked Hiel was willing to sacrifice his own sons for the sake of trying to silence God’s Word.

Yet consider: was Hiel successful? Was the Word of the Lord silenced? Absolutely not! For with the death of each one of Hiel’s sons, God’s Word was speaking louder than ever before. In his actions, Hiel was only confirming the power and eternal presence of God’s Word.

Strikingly, that was also the case when the wicked world tried to silence Christ by crucifying Him. Through Christ’s death, it seemed that the world was successful in silencing Him. But in fact, through the crucifixion, God’s Word spoke louder than ever before. All the Old Testament prophesies were being fulfilled, and God was saving His people. 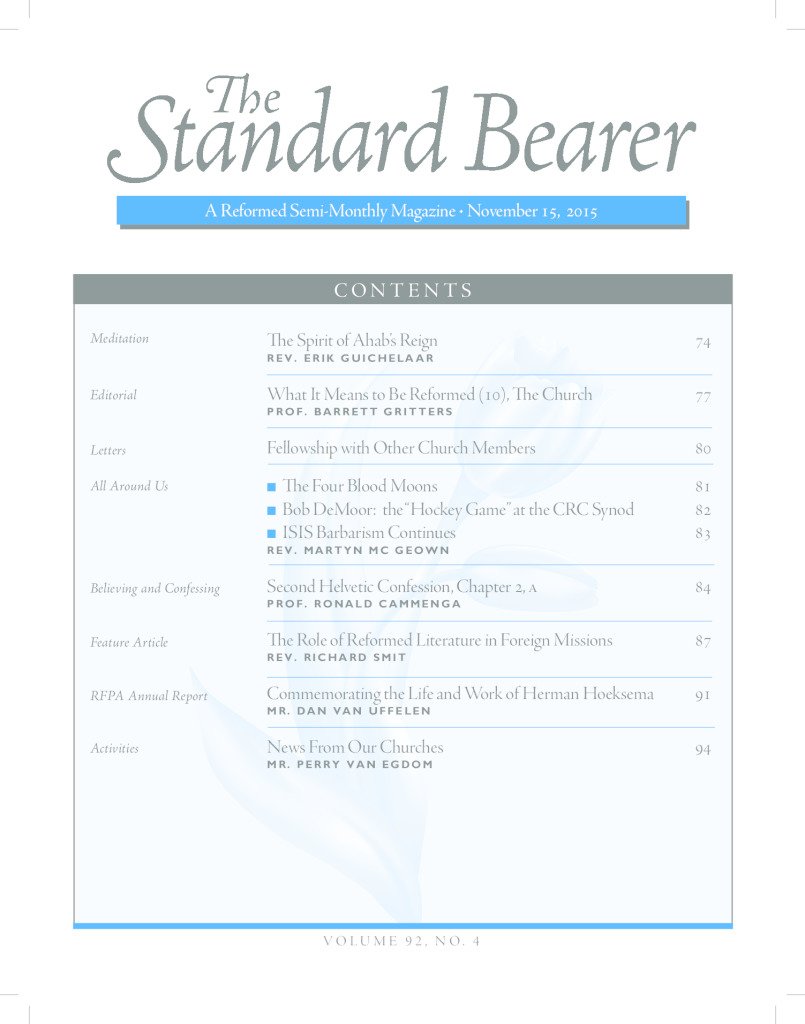