The Sovereignty of Grace

The Sovereignty of Grace

In many ways this is a strange book. The author came to his views by means of a personal study of the Scriptures. He tells us himself:

In the very worst period of the great depression in Canada, I found myself in the fall of 1933 in the province of Saskatchewan, which was perhaps the hardest hit of all the provinces. And I found myself in the worst possible position in terms of survival, since I had no resources and no job, and at that time there was no such thing as relief or welfare for transients. I was some miles north of Prince Albert, facing the winter months in a tiny little shack about twelve by sixteen feet in an area where coal was not available and wood was scarce. The temperature in this part of Canada can be bitterly cold, so cold in fact that the tiny stove I had would not keep itself going much of the time, and the temperature would drop to about -25 degrees F. inside. On one occasion a hot water bottle froze in the bed during the night.

Yet it was marvelously quiet, and, since I had come to know the Lord only about a year before, the Bible was largely an unknown book to me and I had a wonderful opportunity to study it. That winter I went eight times through the entire Bible and worked out, almost entirely on my own, a personal systematic theology. I shall never regret the cold or the isolation. It was a golden period of my life in many ways, and an enormous privilege.

He goes on to tell how, after formulating his own theology from the Scriptures, he read avidly all he could get hold of. The result of his reading tended to confirm his own discoveries and showed him that the theology of the Scriptures was in keeping with the historic Christian faith which stretches back through Dordt and the Calvin Reformation to Augustine and the writings of the apostle Paul. The fruit of all this study is this lengthy and fascinating book on the doctrine of God’s absolutely sovereign grace.

The book is divided into six main sections which deal with an historical survey, a treatment of the five points of Calvinism, the implications of these doctrines for daily life, the relation between election and evangelism, the future of the non-elect and a conclusion by way of summing up the matter with a stern warning against any form of synergism (the view that salvation is a cooperative work between God and man).

The book has many excellent features about it. I can cite but a few. It is extremely well written so that there is never any doubt about what the author is saying. It reads well and can be ready by anyone who has an interest in the doctrines of grace. The historical section is excellent and shows, beyond a shadow of doubt, that the truth of sovereign grace (as over against Pelagianism and Arminianism) is indeed the historic Christian faith. This section is so well done that it is, in itself, totally persuasive if one has any doubts that sovereign grace is the keynote of the Scriptures. Its treatment of the five points of Calvinism is thorough and Biblical for the most part and is an exhaustive analysis of these truths from a Biblical point of view. The exegesis is, generally, careful and thorough and all the objections of the Arminians, Pelagians, synergists, and universalists are answered satisfactorily. All their “pet” texts are examined and explained. His chapter on the relation between Calvinism and missions is itself worth the price of the book. The author even speaks of the two-fold effect of the preaching of the gospel and warns that this is God’s work and must not, therefore, serve as a temptation to alter the contents of the preaching in order to make it more appealing to man.

Nevertheless, in spite of all this good, there are a number of disturbing features about the book. In fact, there are several teachings in the book which seem totally out of harmony with the general defense of the truth of sovereign grace. We mention here a few. The author, in treating total depravity (an excellent section in its own right), introduces a form of common grace somewhat along the lines of Kuyperian common grace, although he is not hesitant to root this common grace in the cross of Christ, something Kuyper refused to do. This common grace is the explanation for the “good” of the unregenerate, although the author stresses in other places that the unregenerate can do no good in the sight of God. Another strange view is his idea that creationism (i.e., the view that the spirit of man is created by God at the moment of conception) means that a child is born with a pure spirit although his body, which he receives from his parents, is corrupt. The corruption of the spirit is due to the corrupting influences of the body in the early years of a child’s life. This is fundamentally a Pelagian notion and one wonders how the author can square this with his fierce condemnation of any form of Pelagianism. In connection with this, the author maintains that we are not personally responsible for our inherited pollution, something which David specifically denies in Psalm 51. Further, while the author has an excellent discussion of foreknowledge which completely refutes the Arminian position, he nevertheless adopts a view of conditional reprobation. On the basis of I Corinthians 5 the author has the strange idea that some people are 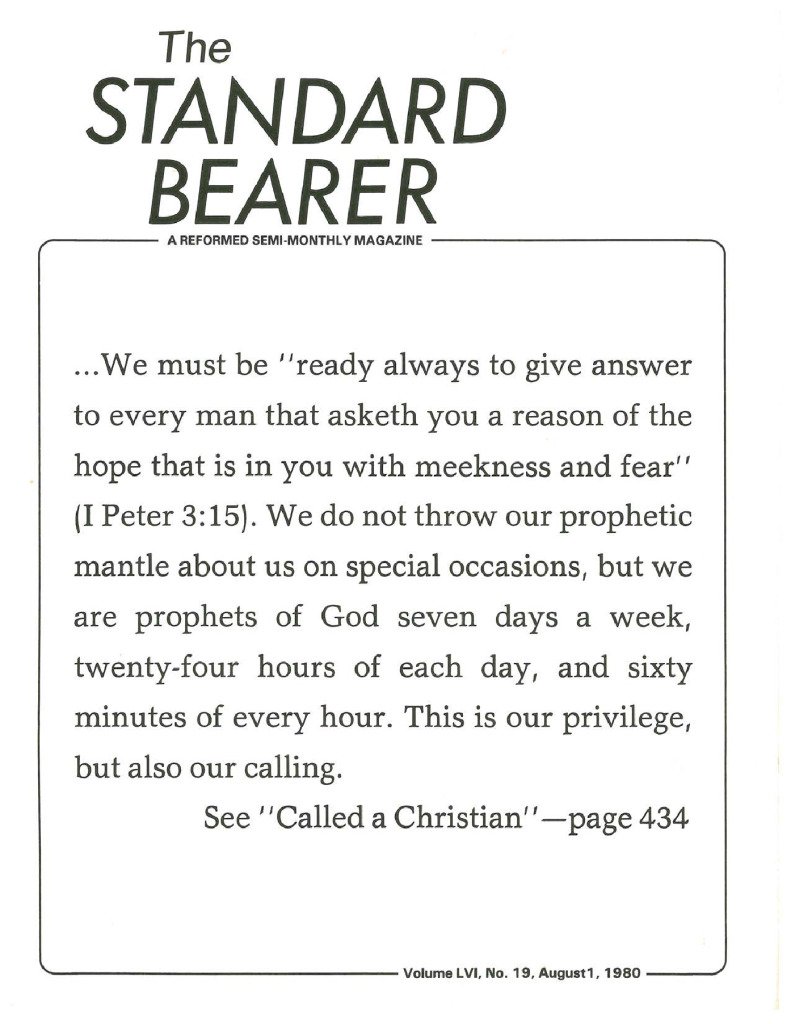