The Song of Moses

Then sang Moses and the children of Israel this song unto the Lord . . .

Under the full light of the morning sun, Israel found itself in the quiet stillness of the wilderness. The air hung in hushed silence except for the gentle sound of the waves lapping rhythmically upon the seashore. The expanses of the desert stretched out before them in peaceful serenity. But within the children of Israel were in turmoil from the unprecedented variety of their thoughts.

Suddenly they knew themselves to be free men. All of their lives they had lived in the bondage of Egypt. They were used to rising wearily every morning to the call of their Egyptian masters. They were used to spending their days at the sole command of others. They were used to bending their backs to the cry of cruel taskmasters. They were used to ending their days in utter fatigue without one thought or consideration to their own, personal desires. Now suddenly they were free; free to live their lives according to the wishes of their own hearts; free to return to a land that they themselves could possess; free to labor for their own benefit and that of their families; free, above all, to worship Jehovah their God in liberty after the manner that they ought. The newness of this feeling, the exuberance of spirit it aroused in their hearts, the very joy with which it filled their souls was almost more than their minds could begin to comprehend.

And then there was the torrent of memories that surged again and again though their hearts; the memory of Jehovah coming to them through Moses to take their part against the enemy and to strike the Egyptians with judgments nine and ten times over again; the memory of that final midnight hour when the angel of Jehovah passed through the land smiting with pestilence and death the firstborn of every house that was not covered by the sign of the redeeming blood; the memory of that last symbolic meal composed of the flesh of the lamb with bitter herbs and unleavened bread, and eaten in haste, fully dressed and ready for travel because it was to serve as a source of physical and spiritual strength to carry them on to the promised land; the memory of their triumphal departure, urged on by the trembling Egyptians who willingly pressed into their hands jewels of silver and gold, an unexpected payment for all of their years of labor; the memory of that strange and mysterious journey that brought them to their freedom; the joy of those first few days of travel when the cloud of Jehovah appeared to lead them toward the south; the feelings of consternation and dismay when they found themselves closed in on every side by the sea and the mountains and Pharaoh’s army so that even the bondage of Egypt seemed better to them than their expected end; the hovering cloud of Jehovah urging them to go onward into the very depths of the sea and swinging around behind them to separate them from Pharaoh’s army only after Moses had raised his rod to divide the sea asunder; the singular nighttime passage through the deep with the winds of heaven holding the tempestuous waters in walls beside them while lightning and thunder flashed and rumbled overhead, and the glow of the pillar of fire gave light to guide their feet; the ascent from the sea as though from the very bosom of death to stand finally upon land that was free; the final justification of Jehovah over his enemies as He brought the walls of water flowing in upon them in their rash and foolish pursuit through the sea. All these memories pressed upon them as they stood amid the quiet stillness of the wilderness, basked in the rays of morning light. Only the bodies of the Egyptian army lapped up on the shore by the waves were to be seen as a reminder of all that had transpired through the hours of the night. That morning as never before, the Israelites understood the greatness of Jehovah their God. Even as His name implied, He had been faithful to His covenant. For all that had taken place, they could take none of the credit. They had proved hesitant and even rebellious; but Jehovah had gone forth in His love to punish their enemies, to bring them out of bondage, and with many miraculous works to carry them on their way victoriously. Their hearts swelled within them at the greatness of their God. At last there burst forth from the lips of Moses and of Israel a song of adoration to their God. After an opening refrain expressing the theme of praise, three glorious verses followed. Each verse opened with an expression of praise to Jehovah after which the first and second verses recounted His victory over Pharaoh and the third gave expression of their faith in the promises yet to come. So they sang:*

Sing will I to the Lord, for highly exalted is He,

Horse and his rider He hath thrown into the sea.

My strength and song is JAH (Jehovah),

He became my salvation;

He is my God, whom I extol,

My father’s God, whom I exalt.

Jehovah: is a Man of war:

Jehovah is His name:

Pharaoh’s chariots and his might He cast into the sea,

And the choice of his knights were drowned in the Red Sea.

Thy right hand dashes in pieces the enemy.

In the fullness of Thy majesty Thou pullest down Thine opponents.

And by the breath of Thy nostrils the waters heaped themselves up;

The waves congealed in the heart of the sea:

My soul becomes full of them;

I draw my sword, my hand will root them out.

Thou didst blow with Thy breath;

The sea covered them.

They sank as lead in the mighty waters.

Who is like unto Thee among the gods, O Jehovah?

Thou stretchest out Thy hand, the earth swallows them.

Thou leadest through Thy mercy the people whom Thou redeemest;

Thou guidest them through Thy might to Thy holy habitation.

People hear, they are afraid;

Trembling seizes the inhabitants of Philistia.

Then are the princes of Edom confounded;

The mighty men of Moab, trembling seizes them;

All the inhabitants of Canaan despair.

Fear and dread fall upon them; for the greatness of Thine arm; They are dumb as stones, till Thy people pass through,

Jehovah, till the people which Thou hast purchased pass through.

Thou wilt bring and plant them in the mountain of Thine inheritance,

The place which Thou hast made for Thy dwelling-place, Jehovah,

For the sanctuary, Lord, which Thy hands prepared.

Jehovah will be King for ever and ever.

The voices of the men of Israel resounded from the mountains of the wilderness and re-echoed across the waters of the sea. The sound of victory literally filled the air. Even as they sang, the women of Israel with Miriam at their head took up the opening refrain. With timbre1 and dance, they responded again and again, “Sing ye to the Lord, for he hath triumphed gloriously; the horse and his rider hath he thrown into the sea.” To the Church of all ages the joy of the children of Israel expressed in this song stands as a picture and a type of the triumphal rejoicing of the saints in New Jerusalem when they in like manner shall sing the song of Moses and of the Lamb (Rev. 15:3). In that day all glory was given to God. Could this nation ever doubt his power again?

When at last they resumed their journey, there was confidence in every step. Here and there among the throng there could still be heard the verses of Moses’ song coming from the lips of those who even as they walked continued to sing. The conversation flowed freely as friends walked and talked together on the way. Only gradually did the people begin to notice how different the land was from that which they had left. Gone were the fertile valleys of Egypt with their ever flowing fountains and springs. Gone was the rich vegetation of trees, vegetables, and grain. All that was to be seen were the barren expanses of desert with only the thinnest covering of wilted grass. Dominating the scene was only the glaring blast of the mid-day sun with its burning, oppressive heat. But that was not a day in which to worry. They had tasted the joy of victory through the power of their God.

It was not until the second and third day afterward that the feelings of the people began to waver. Their joy they still remembered, but the monotony was beginning to tell. Everywhere they looked there were the glaring rays of the sun reflected from barren wastes. True, they did not suffer, for the cloud of Jehovah sheltered them from the greatest heat of the daytime sun; but it was oppressive just the same. And then there was the complete lack of fresh water. That which they carried in their skins had become warm and uninviting to the taste, and even that was about gone. Conversation began to lag, and the song of Moses was no longer heard; the joy of the nation so soon was changed into morbid silence.

It was on the third day that the crisis came. The word was passed through the camp that water had been seen in the distance. The strongest hastened ahead so as to be the first to receive its refreshment. They stooped to drink deeply only to rise spewing it out and crying, “Marah!” The water was bitter. One after another they tried it, but the result was always the same. The water was too bitter to drink. A tide of rage quickly passed through the people until they turned to Moses and said, “What shall we drink?”

It was Moses who went in prayer to God. He was shown a tree which when it was cut down and cast into the water the waters became sweet. The people were able to drink.

But something had happened at Marah. By the Red Sea there had been a joy and confidence that they thought would never end. But now it was known that weakness still remained. The Song of Moses they knew in principle; but only in the life to come would they be able to sing it with such confidence again. 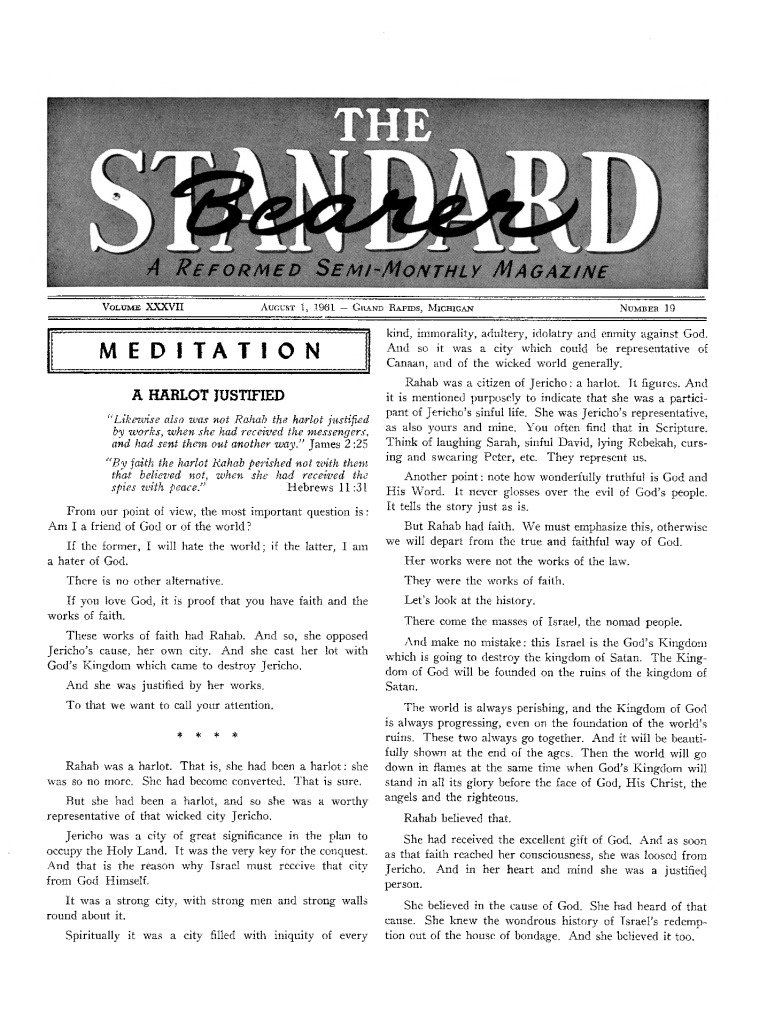