The Son of God Eternally our Mediator

The Son of God Eternally our Mediator

Mr. Kamps is a member of Southwest Protestant Reformed Church.

Dr. A. Kuyper was a master theologian. By means of his writing, lectures, and preaching, the truth of sovereign, particular grace in Christ Jesus for the elect of God was once again restored to the confession and preaching of many thousands in the Netherlands. His work was above all a work of reformation of the church. It was reformation because it was a return to the Scriptures as confessed by the Reformed church. But this was not without a great price that had to be paid by Dr. Kuyper. He had many enemies. He was accounted a “pariah.” He was charged with heresy and perversion of the truth, they cut him off from their fellowship, and, what was worse, his enemies denied him the fellowship of the Spirit and brought down on his head the curse.

One of the books published by Dr. A. Kuyper is entitled That Grace is Particular. I have been busy for some time with the translation of this work. The Reformed Free Publishing Association has agreed to make this volume of Dr. Kuyper available to the English reader.

In this work Dr. Kuyper exposes the unbiblical character of the doctrine of Christus Pro Omnibus, Christ for all. This theology permeated the Reformed church of his day. Kuyper tells us what is meant by this Christ for all: “By ‘Christus pro omnibus’ is meant, that Christ according to the purpose and extent of His sacrifice, had died for all men, head for head, and soul for soul” (p. 3). “…the Universalists, or zealots of general grace, maintain: When Jesus died on the cross, it was God’s will and Christ’s intention, to bring about the kind of atonement, which if need be was sufficient for all men, and which, offered now in Jesus’ name to all men, would be a blessing to so many out of these all, as according to Jesus’ intention and expectation desired to accept this salvation; while it remains only unused, by so many for whom it was appointed, of whom Jesus had intended and expected, that they would believe, but who had not done it” (p. 16).

When Kuyper refers to those who defend a “Christ for all” as Universalists, he is not identifying them as those who believe that all will eventually be saved, but as those who claim that Christ died for all. Over against this false doctrine Dr. Kuyper maintained that the Scriptures teach particular grace: “…The Particularists, or advocates of special grace, who maintain, and teach: By the church must be preached to all creatures, that atonement is accomplished through Christ’s death for everyone who believes, has believed or will believe; that is, because all believers are elect, only for the elect; not according to the outcome, but according to Christ’s intention and God’s counsel; and that as concerns application not in regard to possibly but as yet unconverted persons; but on the contrary as concerns application in regard to persons, whom the Lord loves with an eternal love, even before they were born, and whom He ‘calls by name.'”

Dr. Kuyper’s task was formidable. Humanly speaking we would say impossible. The Reformed church had for many years not received solid preaching on the subject of particular grace. The state church of Holland had been made nearly completely oblivious to what was the truth of the gospel in that regard. The common people had been so misled by the preachers of the day that they just took for granted that God’s gospel of grace in Christ, the cross, was for each and every man, that God loved all men in Christ, and that God wanted to save all men head for head. In order to stem the tide and to call the church back to the gospel of Scripture and the creeds would require all the strength and determination and dedication a man could muster. Kuyper says in regard to the church’s lack of sensitivity to the truth and the unwarranted criticism that he received for his position that God’s grace is particular: “…But how could this be otherwise, with a defense of a portion of the truth, which now already for fifty years has not been heard from the pulpits and under foreign influences has died out of the confession of the greater part of the church?” (p. 46, emphasis mine, MK). In other words, even good people of God lacked spiritual discernment and were easy prey for unfaithful men.

But Dr. Kuyper was motivated and inspired by one all encompassing responsibility: “the honor of God’s holy name…” (p. 4). The false doctrine of a Christ for all, general grace, or Universalism, for Kuyper was a God dishonoring doctrine which robbed the church of the essence of her calling, that is, to worship. How can the believer worship, when the preaching presents a God who cannot accomplish His will, whose Son is made a beggar, and whose grace is made in most instances insufficient to save, or when sinners are made to believe that their salvation is dependent on their own efforts?

In refuting the error of “Christ for all,” Dr. Kuyper felt obligated first of all to demonstrate that the texts which the general grace men always present as conclusive proof of their position do not teach what they claim. These texts are: I John 2:2; I Timothy 2:4; and II Peter 3:9. When you someday are able to read this explanation of these texts you will be impressed how completely Rev. H. Hoeksema’s exegesis of these passages echoes that of Dr. Kuyper. When it came to the subject of particular grace, Hoeksema’s instruction did not differ with that of Dr. Kuyper. In addition, Kuyper rejects the well-meant offer of salvation theory undeniably involved in the general grace theory as an idea that denies the total depravity of the fallen sinner: “If it is to be true, what ‘the proponents of general grace’ teach, that, namely, grace is offered to all men, head for head, on the ground that actually and essentially the ransom is already paid for them, then by this it must certainly be supposed, that the sinner, just like he was affected by sin, yet rightly carries in his soul a power, a faculty, and an ability in order also, if that salvation is offered to him, to accept it” (p. 40). And later he concludes: “Because in this situation this is definitely true, that whoever teaches a general grace accepts and supposes in the sinner the faculties by nature enabling him to choose Jesus as his own; and it is true, therefore, that we oppose this doctrine of ‘general grace’ on the very valid basis, as an idea which fails to appreciate what the Bible has revealed concerning the depth of the corruption of sin” (p. 41).

I could call your attention to many different aspects of Dr. Kuyper’s refutation of Christus pro omnibus, Christ for all, but I want in some detail to present just two aspects of his masterful defense of particular grace and refutation of general grace. In the first place, Dr. Kuyper made the charge that “general grace” ought to be rejected because: “it is unreconcilable with what the Holy Scriptures reveal to us concerning the being and the attributes of the living God” (p. 53). After establishing that even the general grace men have to acknowledge that not all men are in fact actually saved, but that many if not most perish in unbelief and that God knew this fact eternally, Kuyper writes:

Nevertheless, people imagine, write, and preach, that the very same holy, glorious, the all perceptive and insightful God, in connection with the devising of His plan of salvation, had had the will, the purpose, the intention, to let His only begotten Son at Golgotha pay “the ransom” also for all them who would go into perdition.

Teaching, therefore, that God the Lord had fully known: “They cannot be saved!” and that the very same God nevertheless had made a plan of salvation as if He could really save them; as if their salvation certainly was conceivable; and as if He imposed it then, according to the intention of His plan, for the salvation actually of all.

Two representations which of course absolutely exclude one another and which cannot for a moment co-exist, not even in the lucid mind of a man; not to mention then the being of God.

In this way is set forth the possibility in the being of God, that He, the Holy One, would have devised something approximately in this manner: “They will certainly perish; but who knows, I want still with all my heart to save them all; let me act a moment as if I did not know that they will die in their sin, and set for a plan of salvation then, wherein I for a moment set aside my divine thoughts and forget what I still know and see.”

… The issue is God’s essential attribute….

And because the doctrine of general grace says to us: God certainly knew from eternity, for example, that Judas would not be saved, and yet God had thought in connection with the devising of His plan of salvation: who knows whether something will not come or happen whereby he is indeed saved; and for that reason God has had in His plan and Christ has had in His death the intention, for example, really and of a truth to pay the ransom price for Judas also.

Dr. Kuyper also demonstrated that the doctrine of general grace is a denial of God’s attribute of righteousness:

Yes, with nearly all God’s attributes, which by the Holy Scriptures are shown to be in the divine being, this doctrine of general grace collides. For example, to mention only one, with his inviolable and unimpeachable righteousness.

Everyone will agree with this, that in an obvious way nothing more contradicts every conception of righteousness, than that you nevertheless refuse to let the slave go freely, for whom the ransom is paid.

And yet, if Jesus has, even as men pretend, fully paid the debt, the ransom, for every person, and the proponents of Universalism for all that acknowledge themselves, that, yes, let us in deep sorrow acknowledge, that the majority die in their sins, how would you then be able to maintain the righteousness of a God, who first allowed the ransom for the lost to be paid, and then counts the sin against them nonetheless, as if this were not paid? (p. 59). 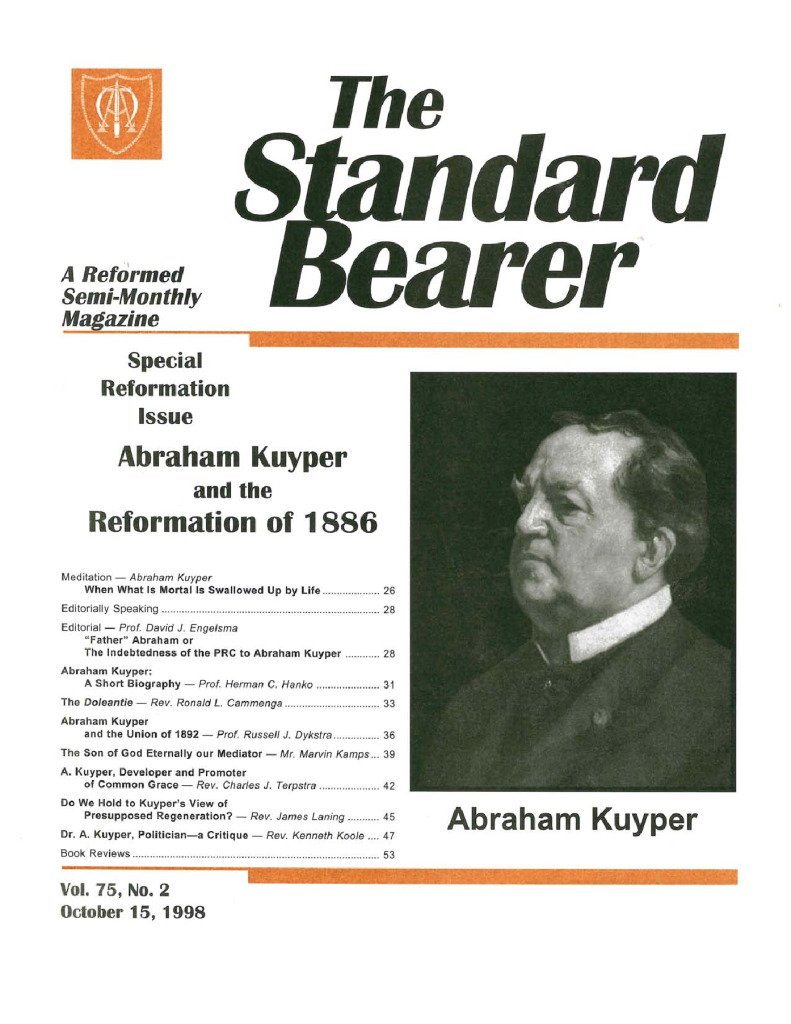