The Son of God Eternally our Mediator (cont.)

The Son of God Eternally our Mediator (cont.)

Mr. Kamps is a member of Southwest Protestant Reformed Church.

Dr. Abraham Kuyper now turns to the matter of Christ’s foreordination and the blessed reality of the mystical union of Christ and His people, in order to disprove the notion of Christus pro omnibus. The truth and reality of the mystical union of Christ and His people rests upon the truth that specific persons were eternally known to God in love and given to Christ as His responsibility for their redemption, sanctification, and preservation. This mystical union may be expressed as the “sweet whisperings” of the Spirit of Christ to His own. The Spirit testifies to the repentant sinner, and to him alone, “There is therefore now no condemnation in Christ Jesus”; to those who patiently endure His just chastisements, “But if ye be without chastisement, whereof all are partakers, then are ye bastards and not sons”; and to the weary in well doing, “Eye hath not seen nor ear heard, neither have entered into the heart of man, the things which God hath prepared for them that love him.” Dr. Kuyper asks the question: When does this mystical union begin? After faith, or long before faith? We might understand his point if we ask ourselves, when does the bond begin between mother and daughter? Only after birth and after the child has developed self consciousness? Or did the mother have a bond with this child before birth and before the child’s self consciousness? Every mother knows the answer: The mother took responsibility for the child long before, loved her long before, and did all that was possible to make the child’s entrance into the relationship one of health and unspeakable joy. This is but a faint picture of God’s loving care of His own chosen in Christ from before the foundation of the world. Let us now follow Dr. Kuyper’s defense of particular grace.

In the second place, after having demonstrated that the doctrine “Christ for all” is an attack on the being of God, Dr. Kuyper next turns to the subject of the person the Mediator. He shows that the person of the Mediator is impoverished and the matter of Christ’s foreordination is neglected by those who promote the notion of general grace. Dr. A. Kuyper writes:

being, we have to deal, naturally, not only with His divine and human nature, but also with His foreordination.

…But both crib, and cross, and crown were directly the consequences and the working out of a devised plan, of a previously established decree of the will, of a foreordaining God.

…we do not for a moment hesitate, on the basis of the Sacred Scriptures, to express very firmly, and very explicitly, that to present a Redeemer who only accidentally would be suited to His work of redemption is a thoroughly false, ungodly, and absurd idea; and that no Christian who lives uprightly can or may confess any differently than, that the Mediator’s person and the Mediator’s work inseparably belong together; from all eternity are foreordained for each other in the “decree”; and from the beginning in connection with the execution of this “decree” were prepared for one another (pp. 61, 62).

Dr. Kuyper, having reminded his readers of this foreordination of the Son of God to be the Christ, then asserts “that grace can be nothing other than particular” (p. 63). He advances his argument with the question:

Does the Mediator walk with the redeemed in communion just now at exactly the moment that their faith breaks through to reality; or does there exist between the Redeemer and His redeemed a link even before they were born, taking its origin in God’s eternal decree?

If one pleads for a general grace, then, of course, only the first can be true. Then it is first decided and established through someone’s own faith, in the moment that he enters into faith, whether he is and that he is a redeemed person. Until that moment, it could just as well have happened that he never would have come to faith and, therefore, never would have been “one redeemed in Jesus….”

Meanwhile, we know from the most explicit statements of prophet and apostle, and also from what is caught from Jesus’ own lips, that the redeemed “are given him by the Father” and that only such “can come” to him!

Clearly and forthrightly it is said, that the bond of love, the relationship between Christ and His members, lies grounded in the eternal and is rooted in the decree from before the foundation of the world.

So that by this already we can come to no other conclusion, than that the person of the Mediator is foreordained and prepared for these specific persons, who one day would appear as His redeemed people (p. 63).

Dr. Kuyper goes on then to explain that Christ is the Head of His body the church. And that Christ Jesus was prepared for certain specific persons, with specific names, who together constitute the body of which He is the Head. Kuyper rejects with all his soul the idea that the Mediator was prepared for a certain number of persons unnamed. He writes: “The person of the Mediator becomes a phantom, an imaginary image, an abstract conception without reality, if you make Him a Redeemer of N.N., and He cannot come to His rightful position unless you frankly confess that He is the Mediator, Guarantor, and Redeemer of A, B, C, etc.” (p. 64). Kuyper then proceeds to tell us why this is so important:

People fail to appreciate, very recklessly, the tenderness and depth of the Christian faith, if they remove from our confession, in a supernaturalistic manner, the mystical union with Christ, i.e., “the soul’s communion and fellowship of life of the redeemed with their Lord.”

This mystical union, this communion, this togetherness, and this belonging to one another of Jesus and the redeemed must be acknowledged, professed, confessed, and firmly maintained, or your Christianity is gone.

But what is this mystical union? A handful of undifferentiated straps and ties and cords that Jesus displays, so that you can grasp this one, and I that strap or tie or cord according to our own choosing, in order to attach to Jesus for an anchor?

No, that is not the idea.

But everyone has his own tie, wherewith he is bound unto his Jesus. You would have nothing to the strap that I grasp, to the tie which surrounds me, to the cord that binds me, and I would not be able to gain anything from the tie which binds you to Jesus.

Everything in the work of redemption is personal, individual, and prepared for each man. Everything has its own address and name and title. It is not a retail store, where things are sold, and therefore everyone takes according to his own choosing, but a palace wherein gifts are distributed and the gift is designated therefore for each one for whom it is given.

The bond of the mystical union with Jesus has to be personal, also for this reason, that this bond in regard to us penetrates to the depths of our life, of our character, and of our existence.

And just because this bond of the mystical union with Christ is so completely personal, so also there must be in Jesus’ person, in the person of the Mediator, one’s own, special point of contact for each redeemed person. That means there must be something in that person for me, that only I can find in Him, and so also for you an attracting power, which again draws not me, but which draws you only (p. 64).

After having established the fact of Jesus’ foreordination of specific elect persons, with specific names and needs, Kuyper contrasts this biblical fact with the superficiality and unbiblical character of a “general grace doctrine.”

In this way is conclusively proven, that the doctrine of general grace can in no way be reconciled with the true reality of the person of the Mediator.

Upon that untenable position, the redeemed exist first by a choice of the will in the moment that he comes to faith; there first begins to be born a relationship from that moment on between him and Jesus; there is neither in him anything that previously was prepared for him as to the Mediator nor anything in the Mediator personally and specifically prepared for him….

With this notion not only all foreordaining is lost, but likewise the reality, the fullness, the glory of the person of the Mediator, and people produce a representation of the Savior so offensive, annoying, and scandalous, that it is for us truly comforting to be able to add, that not even one Universalist ever has dared to present this blasphemous image of the Mediator, and all, to the very last one, have remained superficial and illogical, rather than to cause the image of their Mediator to appear to be so empty and shallow… (pp. 65, 66).

Then Kuyper turns with great urgency to his reading audience who have been misled by general grace preachers and who have been inclined to disregard the counsel of God, the decree of election, and the foreordination of the Christ to be the Mediator of specific persons with specific needs, and asks:

But if the Bible shows you a more excellent way and history says to you, that your own fathers have walked that excellent path, why, why, I pray you, is that much more glorious way always brought into discredit as an errant path of abomination and avoided? (p. 67). 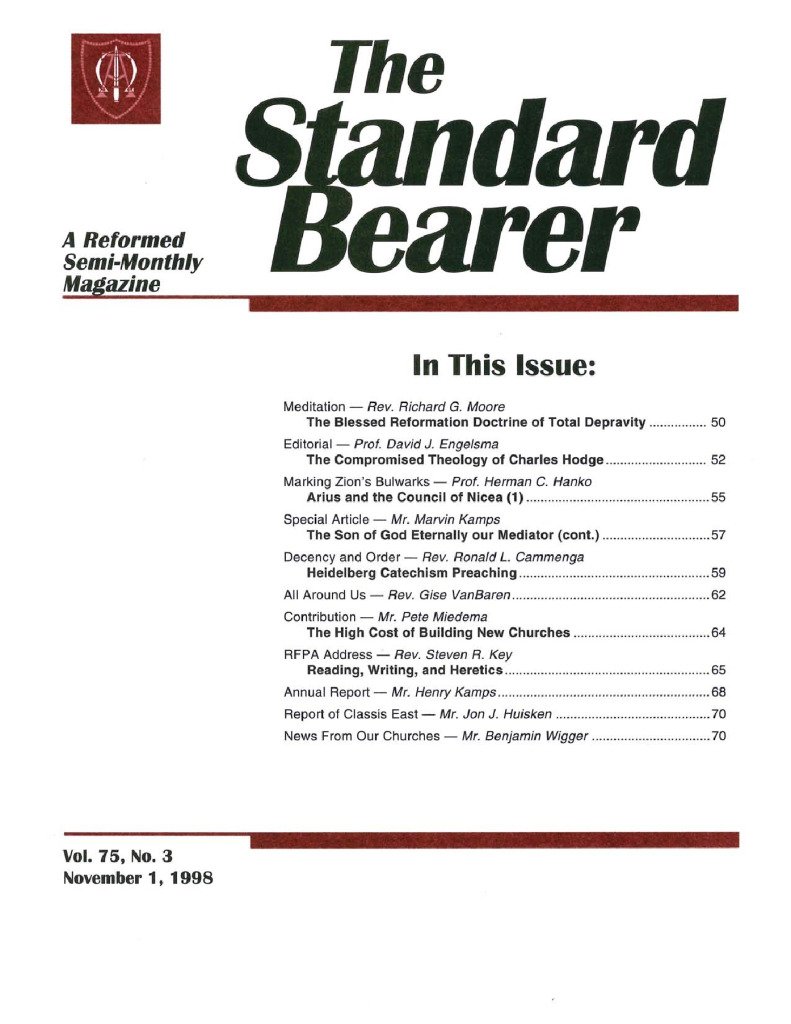