In this section of Isaiah’s prophecy extending down to chapter twelve, we have discourse concerning the Messiah:

A. Foretelling Destruction of Confederated Syria and Israel by Assyria(Isaiah 8:1-4).

1.The Command to Write this Prophecy. “Then Jehovah said unto me, ‘Take to thee a great tablet (one with plenty of room for writing large letters), and write upon it with a style of a man: To Mahershalalhashbaz.'” The private prophecy of the defeat of Syria and Israel in Isaiah 7:8-9 is now publicly confirmed and demonstrated by the divine bestowal of a symbolical name. For the writing on the tablet is what became the longest name in the Bible. Its meaning is, Speed to Spoil! Haste to Prey! This is God’s command to the Assyrians to hasten to the spoil of Damascus (Syria) and Samaria (Israel). It was to be written with a man’s pen, not written with the finger of God, nor in the tongues of angels, nor with any other miracle handwriting, as that on the wall, pronouncing Belshazzar’s doom. It would not be esoteric or cryptic writing, but would be a Hebrew vulgate, published in a popular edition, so that it might be read easily by the most inexperienced reader. The Bible is not written in the technical language of scholars, but in the language of the people.

The prophecy informs that a Maher-shalal-hash-baz is to be looked for, and when he appears the prophecy shall have been fulfilled. There are but four words. They will imbed in the memory of those concerned their wrathful import that God is speeding in judgment against them. They will be as moved by this writing and symbolical figure as if it were written with the finger of God. They are frightening words, and need only be flashed before them to remind them of impending destruction. But the comfort to the elect remnant in all this is that the destroyer shall be destroyed. Do not fear him. He shall pass away. He can destroy, but cannot save. Look at the higher prophetic sign, Immanuel. He will save!

The prophecy of Isaiah is the Book of Immanuel. All things point to Him, even the judgments. He and His preached word have a two-fold effect on men. His proclamations of judgment are despised by some, heeded by others. He was set for the fall and rising of many in Israel. To those who refuse the divine warnings, He is a stone of stumbling and rock of offence. To the remnant of Israel, who prepare to meet their God, He is a glory and a defense; His gospel is a savor of death unto death, as well as a savor of life unto life, both in the congregation and on the mission field. The reprobation of foreordained wrath, as well as the election of grace, are always working out, and working through the generations of men. This separating process has continued, does and will continue, until God’s eternal good pleasure for reprobate and elect has been completely fulfilled. Reading the name Maher, the chosen will be moved from the path of the destroyer by the drawing power of Immanuel. (John 6:44). Others, sovereignly blinded and hardened, willfully and wickedly stop their ears against His voice to become the spoil of the spoiler.

2. The Care Taken to Attest the Prophetic Record. “And I will take as a witness for Me faithful witnesses, namely Urijah the priest, and Zechariah, the son of Jeberechiah.” (v. 2). The Lord says He will do this in order to ensure the validity of true prophecy as genuinely made before the event, and to uphold His own honor. With the fulfilment of the prophecy, these witnesses could then come forward and testify that Isaiah had already predicted it. That neither this Urijah, nor this Zechariah can be conclusively identified matters little. They were well-known, reputable men, and sworn witnesses are needed when you have such unbelievers as Ahaz in the kingdom. But then, the Word of God always comes well attested (Acts 14:17). That divine attestation will leave some men sovereignly hardened, as the prophet was informed (Isaiah 6:9-10). The outside world and the reprobate in the church reject the witness of God. They prefer their own thoughts and opinions, their own schemes for peace, their own alliances as far more workable and pleasant. But God’s own Shearjashubs (a remnant shall return) prize His witness, tremble at His warnings, and preserve His holy doctrine. They see the divine seal of truth upon the gospel. They set it to their seal that God is true. They receive the religion of Jehovah and the gospel of Immanuel as the very truth.

3. The Prophecy Titled with the Symbolical Name of His Child. “And I came near to the prophetess, and she became pregnant, and bore a son. Then Jehovah said to me, Call his name Mahershalalhashbaz.” (v. 3). The symbolic name is now given the prophet’s new born son, making him a living reminder of the prophecy. For prophetic names given three children of another prophet, see chapter one of Hosea. The prophetess is not ha-almah of Isaiah 7:14, but Isaiah’s wife. She may herself have prophesied as did Philip the evangelist’s daughters. Certainly her whole family prophesied publicly just by appearing in public. Their very names were sermons. Isaiah and his sons in their own persons were, visibly and bodily, walking sermons. They were audio-video displays of the impending ruin of some, and of the gracious deliverance of others in complete salvation. As they went along the streets, they were a gazing stock, like men from Mars, like the filth of the world, the off scouring of all things. Probably they provided ridicule and banter for profane scoffers. But leaving them without excuse, they were friends and beacons to the righteous.

4. The Prophecy an Exposition of the Name. “For before the boy shall know to cry, ‘My father!’ and ‘My mother!’, the strength (riches) of Damascus (Syria) and the spoil of Samaria (Israel) shall be lifted up before the king of Assyria” (for him to take away, v. 4). The time of the prophecy’s fulfilment shall be when the child is old enough to say papa and mama, that is, in infancy. Since the prophecy concerning Isaiah’s son would be actually witnessed by the people and by official, well accredited witnesses, it would be a pledge also of the prophecy concerning the virgin’s Son. The contemporary prophecy sanctions the future prophecy of Immanuel. Ahaz will refuse this sign, of Isaiah’s son, to his everlasting embarrassment. In fact, this prophecy heaps divine scorn upon his faithless fear of man. For two years from the making of it Tiglath-pileser plundered Damascus, and twelve years later Samaria fell. But then, the spoiler must always expect to be spoiled (Isa. 33:1). Also deniers and mockers of eternal judgment must expect to be judged. They have had prophecies and warnings substantiated by faithful witnesses. It is all left standing on sure record. Many judgments and overthrows have already come to pass, and soon enough. God’s counsels in their fulfilment do not tarry. They speed to full realization. Men like Ahaz wish the divine judgments would never come. They try to persuade themselves they never will happen. They not only deny there is a coming judgment, but they laugh in the face of judgment. Ours is a mocking age which would have but mock punishment; a cursing age, damning everything in sight and out of sight, but would have no damnation, and with hell on the tip of the tongue it would have no hell. Many ministers of the gospel flinch from their duty to declare the day of wrath, not wanting to be criticized or labeled as preachers of hell-fire and brimstone. Many pulpits weakly spout little spurts of “love, love, love,” as though God not only intends to, but will save everybody. Rarely is reprobation preached, or the doom of the wicked.

B. Revealing Desolations Made by Assyria in Israel and Judah (5-8).

1.The Sin of Distrust and Misplaced Trust on the Part of Judah (5-6). “Also Jehovah added to speak to me again, saying, ‘Because this people rejected the waters of Shiloah, the ones going, flowing gently, and rejoice (exult) in (the retreat of) Rezin and the son of Remaliah’ ” because the people had distrusted God’s protection and had relied on the success of their application for help from their (and everyone’s) enemies, then, behold, (and here read v. 7), a flood of God’s judgment would come upon them. “And Jehovah added to speak to me.” Jehovah here is distinguished from Immanuel (v. 8). In the Godhead, one person is distinguished from the others. “This people” is the same “this people” of 6:9f, referring to Judah. That they had rejected the waters of Shiloah means that they despised the land of Judah, their own country, and especially the Davidic monarchy, representing the protection of God and the royal promise. They despised the still small voice in the prophets. So they then really despised Jehovah. They rejoiced in respect to Rezin and Remaliah’s son, that is, they exulted in the taking off of the pressure of these two kings, of Syria and Israel.

These waters of Shiloah are said to issue forth from between Mts. Moriah and Zion. They are then a fitting symbol of the decree or word issuing from God’s temple and kingdom in Zion, as over against the kingdom of this world represented by the overflowing Euphrates. Israel was the least of the nations (Deut. 7:7), Bethlehem the least of the cities of Judah, David the least in his family, the coming Messiah to be a root out of a dry ground, despised and rejected of men because He Was a Man of sorrows, meek and lowly in heart. They despised all these things; they despised the day of small things. They claimed they had no king but Caesar. They wanted to be a reckoned with world-power along with all the other nations. Now see what they come to.

It is no different with our own nation. Our country is guilty of alliance and dalliance with our enemies who spy on our embassies, spy on us through the United Nations facility and subversively and submersibly invade our seas. We support their communist regimes with our capitalistic wealth. We allow ourselves to be “contained” by their policies and strength. We are embarrassedly silent as to the short-wave radio propaganda attacks. With our techniques we further their technological advance. We seem more pleased with their success than we are concerned with solution to our own moral and economic problems. We are the scorners of our friends and the sycophants of our enemies. In the interest of international peace, we are all but ready to surrender to them. For we hear that soon upon is will be, on our part, the last of navy yards, the last of nuclear bomb testing, the last of the arms race, as we become more and more akin to our enemies, philosophically and politically. As for the church world, it has almost entirely already defected to the enemy.

All the more reason why we, as Christians and churches, must be different, must hold fast that which we have (and we have so much of pure gospel preaching and glorious Reformed truth); for to him that hath shall be given, but to him that hath not shall be taken away even that which he seemeth to have! 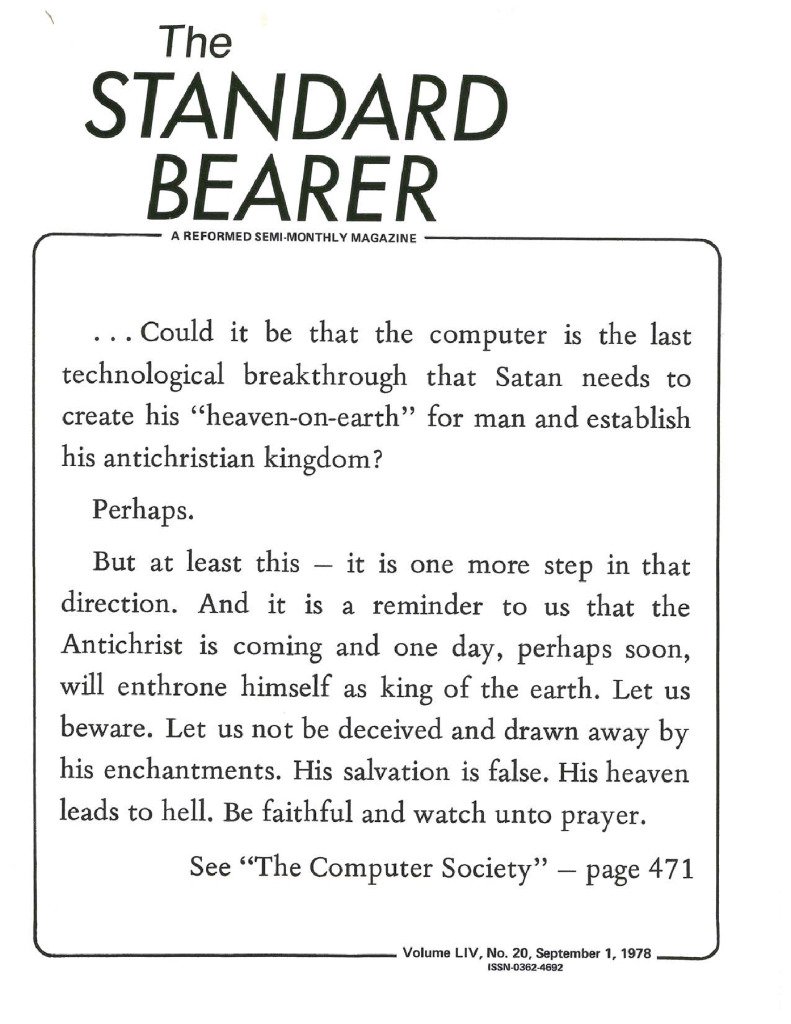