The Shame of a P.R. Minister

The Shame of a P.R. Minister

Well, this is the last article that you will read written by the undersigned, at least for awhile. For the next twelve articles in this rubric you must look to Rev. Bruinsma and Rev. Koole. It is my prayer that you who took the time to read my articles might have been edified by them. And further, it is my prayer that you who take the time to read the future articles written by my colleagues might also be edified by them. I am confident that you will be.

For a subject for this last article from my pen I was somewhat at a loss. I really did not know about what I should write. That loss did not occur because of a scarcity of subjects. But, rather, that loss occurred because of an abundance of subjects. As you have probably noticed in my past articles, “food for thought” for my articles have been derived from magazines such as the Reader’s Digest or Time. In the past two issues of Time magazine I found an abundance of “food for thought.” As I read those two issues I thought to myself that an article could be written on religious persecution. There is a great deal of that going on these days in the Soviet Union. Or, so I thought to myself, I could write an article on a recent Supreme Court decision to ban the Ten Commandments from public schools. Or, so I thought to myself, I could write a sequel to my article entitled “Who. Shot J.R.?” In the December 1 issue of Time the answer to that question is given. I said in my past article, and I say it now in this one, I am not interested in the answer to that question. But I and you with me should be interested in a quote made by one of the actors of the program about future episodes: “We’ve just scratched the surface of evil. Just wait,” I won’t! Or, so I thought to myself, I could write an article on the Pope’s recent visit to Luther’s Germany and his attempt to reunite the Romish Church and the Lutheran Church. Maybe Luther was not so wrong after all when he called the Pope the Antichrist. I could write an article on the poor state of the economy; blatant sexuality in the television commercials; the recent earthquake in Italy in which many thousands were killed and many more were left homeless. And last but certainly not least, I could nicely write an article about the Bible being accused today of sexism, male chauvinism, and anti-women!

And when those thoughts arose in my mind, I was ashamed! And I am not ashamed to admit that either. From a negative point of view I was not ashamed of Mr. Doezema’s article. Let me state that very clearly. Without reservation and without qualification I was not ashamed of his article. And let me state this also very clearly: Mr. Doezema need not be ashamed of his article either. He, in my opinion, did nothing wrong in writing what he did. In fact he did everything right in writing what he did. I commend him for having the courage to tell the readers of The Standard Bearerabout some of the things that go on at our high school. Ignorance is not bliss! Our readers must be informed as to what happens in our high school. Yes, even those readers who are deeply opposed to our cause as churches must be informed about the situation in our high school. Especially they have to be informed when a man is called upon to write about that school. After all, a writer must speak the truth. And if that writer must write about a rose that has some withered petals, that writer may not write only about the petals that are not withered, but he must also write about the withered petals. To do anything else, on the part of that writer, is false and deceitful. Yes, therefore, it was perfectly right and proper for Mr. Doezema to write what he did before the eyes of each and. every reader of <i>The Standard Bearer! But I must say more about that a little later in this article.

But from a positive point of view my shame arose exactly because of the things that go on at our own high school. Of that I was ashamed! And my ashamedness at that led to concern—concern at the inroads that the devil and all his hosts are making in the sanctified, godly walk of life of some of our young people! That is a sign of the times! Make no mistake. We as Protestant Reformed Churches are the purest manifestation of the body of Christ in the midst of this world. We believe that, and we may never forget that. But it is simply a fact that in the purest manifestation of the body of Christ, the devil works the hardest. That too, we may never forget. The devil does not have to work so very hard in the world or even in churches that have long ago departed from the truth. He has them! What he does have to do, and does do, is work very hard in those churches which do manifest the marks of the true Church. How does he do that? He does that in the first place by attacking the precious truths that that church holds dear, and by attacking the preaching of those truths. But in a very real sense of the word he does that by attacking the covenant homes of that church, and the parents and young people in those covenant homes. His word is: if I can’t get the preaching, I will strive to get the young people! And if I can get the young people, they, who will be the future parents—fathers and mothers—of the true Church, won’t listen to the preaching anyway! That is what the devil says.

What then must we say about that? Must we ignore that? Must we overlook that? Must we say to ourselves, “We cannot do anything about that anyway. That is just the way it is. And besides, young people decades ago were just as bad, and look how they turned out.” Is that what we must say? Oh, no! I for one refuse to say that and take that position. Sin may never be overlooked. That first of all. And secondly, maybe it is true that young people decades ago were just as bad. But with respect to that, let me assure you in the first place that I am not concerned about young people decades ago; and in the second place, let me assure you that those young people who maybe did do things just as bad decades ago were brought by God’s grace to repentance! And that is exactly the answer to our question. What must we say about that? We must not say, overlook it. But we must say, repent! And having said, repent, we must repent! Notice reader, I said we! And that we is all inclusive. It does not only include our young people. That to be sure. But it also includes the parents of our young people—the parents of all our young people. And it also includes every single one of our ministers and office bearers, including myself. Why? Because we are all sinful! We are all in need of repentance. Not a one of us may be excluded. In shame, in sorrow for sin, all of us—our young people, our parents, our office bearers, our ministers—must fall down together before the foot of the cross of our Lord Jesus Christ and say, “O God, be merciful to me the sinner.” That must be done.

Is there? There is in me. Having read the article of Mr. Doezema, I in my shame was brought by the grace of God to repentance. Were you? Were you as the young people of our churches? Were you as the ministers of all our young people? Only you can answer that question before the face of our God.

And having said that, I have come to the end of my article. But this article is not the end, is it? I have used this expression in one other article, and now I use it again: “It is only the beginning”—the beginning of a humble repentant Church and people in whom the Son of man shall indeed see faith manifest. 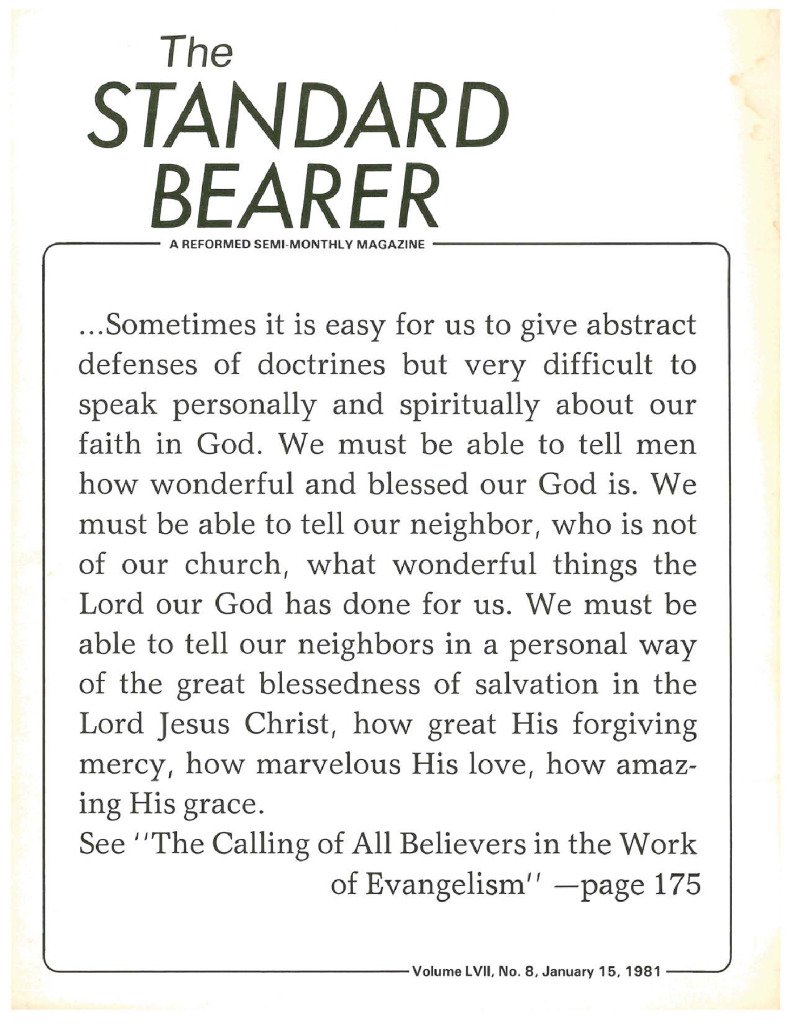