Recently, I (and I assume all the clergymen of our area) received a special mailing from G.R.A.C.E. (the ecumenical council of clergymen and rabbis in Grand Rapids) encouraging participation in a “hunger week” beginning last April 13. This was designed to make people aware of the hunger problem in the world as well as to raise monies to help relieve the problem. Enclosed: in this appeal was a suggested Bulletin insert for the Sunday of April 13, entitled, “The Shakertown Pledge.” I do not know how many churches actually printed that in their bulletins. Probably many did. It is another instance of propaganda conditioning those within the churches (and synagogues) for the coming antichristian world power. For although this “pledge” contains elements which one might not dispute, much of it involves ideas which can only prepare and condition many for the coming of the antichrist and his kingdom. The “pledge,” reads as follows:

I declare myself to be a world citizen.

I commit myself to lead an ecologically sound life.

I commit myself to lead a life of creative simplicity and to share my personal wealth with the world’s poor.

I commit myself to join with others in reshaping institutions in order to bring about a more just global society in which each person has full access to the needed resources for their (sic) physical, emotional, intellectual, and spiritual growth.

I commit myself to occupational accountability and in so doing I will seek to avoid the creation of products which cause harm to others.

I affirm the gift of my body, and commit myself to its proper nourishment and physical well-being.

I commit myself to examine continually my relations with others, and to attempt to relate honestly, morally, and lovingly to those around me.

I commit myself to personal renewal through prayer, meditation, and study.

I commit myself to responsible participation in a community of faith.

The document goes on to explain the idea of this “pledge”:

We believe that there are two important steps that can be taken:

—First, we must commit ourselves to work for a globally just society in which no one goes without.

—Second, we must be willing to simplify our own lifestyles and begin to move toward a just World Standard of Living.

This is what is “new” about the Shakertown pledge. Declarations of world citizenship are not new. Devotional and worship commitments are important—but are hardly new. No, what is “new” in the Pledge is the firm declaration that personal piety, social conscience, and a simple lifestyle are all essential parts of a religious life that possesses integrity.

One notes many points which are disturbing, to say the least. There is the proposed declaration of “world citizenship.” This can not mean, of course, that all men live on one earth. That has always been true. Nor does this merely suggest that one has certain obligations, and that too, before God, to use material things aright. But this suggests the fact of “citizenship.” That certainly implies a political relationship. Usually, we regard ourselves to be citizens in a specific country, whether of United States, England, Canada, or elsewhere. But the “pledge” would seek to remove that concept from one’s mind. We must rather think in terms of “world citizenship.” That would suggest ultimately a world, power, a centralized world government. One is encouraged to think in terms of that.

That is foretold also in Scripture (Rev. 13 is a clear example of this). Man will finally conclude that the solution of his problems is to be found in world-oneness; in a world power. And from his point of view, this is correct. The “wound of the beast” of Revelation 13, incurred evidently at the tower of Babel and the confusion of speech, will be healed. Divisions among mankind must cease. Man must become united. There must be world citizenship rather than national citizenship.

And all this is being printed on church Bulletins to encourage cooperation of the churches with this antichristian viewpoint.

Secondly, this “pledge” has something to say concerning the redistribution of wealth. It not merely recognizes inequalities in the question of wealth, it not only points out injustices in connection with that, but it pledges an individual to work toward redistributing his personal wealth to the world’s poor. And, this is proposed as a “pledge” for a Christian.

In considering that, one must beware of a conclusion based on greed in which he would insist that he will keep what he has. He will not give. These material things belong to him. But on the other hand, the principle set forth in the “pledge” is hardly Christian. Fact is, there seems to be more than a tinge of socialism suggested there. There is the implication that all ought to share equally of this world’s goods; that there is something inherently unchristian to have more than others. Now Scripture does not teach that. In the Old Testament, rich men as Abraham, Job, David, Solomon are not required to redistribute their wealth so that all might have equality. In the New Testament one does not find a command to work for such equality. On the contrary, the rich are called to be properly compassionate and the poor to receive thankfully.

One might add that the giving of the child of God is first of all to assist fellow-saints. When Paul at Antioch took collections for the drought-stricken Jerusalem, these collections were given there to the church. But also, these mercies of Christ are to be given with the Word of God accompanying it. One who receives must know that this gift is not comparable to the “giving” by the world, but is rather the fruit of the mercies which the Christian has experienced from Christ.

The pledge, then, seems to lead into a distortion of Christian giving to make it appear more as socialism or Communism than a reflection of Christ’s mercies.

In the third place, this “pledge” commits one to a “reshaping of institutions in order to bring about a more just global society in which each person has full access to the needed resources. . . .” Again, one must be quick to say that there are many institutions today in need of “reshaping.” This is true both in government as well as within the church world. There ought to be a spiritual reformation. But that, obviously, is not what this “pledge” has in mind.

The “reshaping is that governments and churches may bring about a “more just global society. . . .” One pledges to compel institutions to take the same point of view as the “world citizen”. Where views clash against this “world citizenship” viewpoint, the individual must see to the “reshaping” of these contrary views and the organizations which hold them. The “pledge” does not mention the means which must be used to reshape organizations. Some have advocated “peaceful” means; others insist that violence is justified to accomplish the end of reshaping of the institutions.

The child of God may not be participant in such “reshaping”. He confesses that organizations are often very corrupt. He must also point out this corruption and emphasize the calling for spiritual reformation. He sees the evidences of sin in the institutions of men. But this is not the same as insisting upon a “reshaping” in order to bring about a “more just global society.”

In the fourth place, the “pledge” speaks of one’s relationship to others so that one “relates honestly, morally, and lovingly to those around me.” That does sound good. Sounds a bit like the Boy Scout oath: Or a modified golden rule. Yet it must be noted that, Christ has no place in this proposal (nor in any of the others). The “pledge” suggests a relationship between mankind which presumably is common to man. Anyone can practice such relationship—if only he tries enough. But the child of God is to love his neighbor for God’s sake. His relationship proceeds out of a regenerated heart. He shows in word and deed that he does belong to Christ. We may not confuse that relationship with the “social gospel” of our day.

Fifthly, the “pledge” speaks of “personal renewal through prayer, meditation, and study.” That, too, would fit in well with the principles of the antichrist. The Pharisees of Jesus’ day could observe this requirement well. There is in it no personal regeneration or conversion. There is no God specified to whom one is to pray. There is no mention of Christ—just: prayer, meditation, and study. Reminds one of the idea of salvation by good works. It sets forth a course of “righteousness” that any can observe. All can “profit” by pledging to do this. But this in no way compares to the specifics required in Scripture. In the Bible one learns how he must study the Word; pray to the Sovereign God for Jesus’ sake.

No, the child of God can not participate in such an unholy “pledge”. It shocks him that so many “churches” can be ready to “pledge” all of this. But it does remind us again that soon then our Lord must return on the clouds of glory.

“Even so, come quickly, Lord Jesus!” 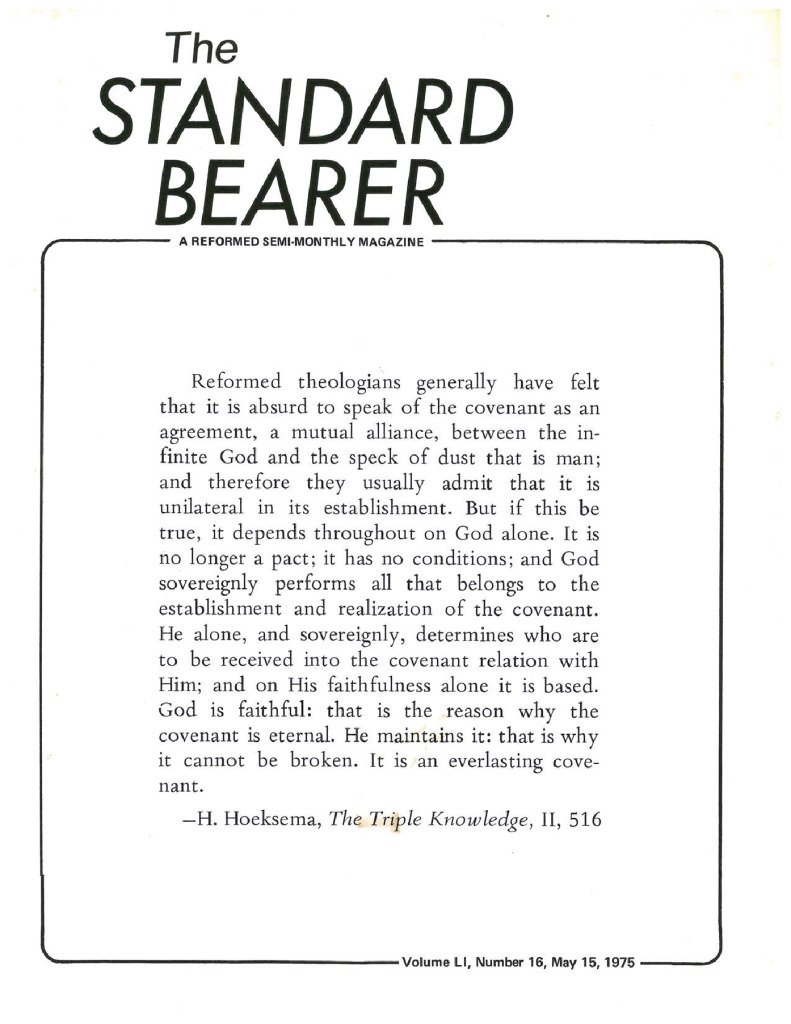