The fourth and final session of the Vatican Council of the Roman Catholic Church came to its conclusion last December 8, 1965. Much happened during the four years this Council was in session. That is true in the world about us, but particularly in the realm of that which is called “church.” It is difficult now yet to believe that so much could have happened in the “church world” during this time. One cannot but be reminded that the end of time must be at hand.

It is difficult for an outsider, and one who has only read accounts of others, to come to specific conclusions concerning the Vatican Council now ended. Even Roman Catholic scholars maintain that they themselves can not properly evaluate the work and effect of this Council except in the light of subsequent history. There is much truth to that. It remains to be seen if some of the decisions taken will in fact be carried out by the Roman Catholic church in general, and also whether each segment of that church will abide by and execute the declarations of the Council.

One thing is very evident at the close of this Council: it was doubtlessly the source of more publicity than any other event of “church” history. There was hardly a magazine or newspaper which did not regularly report on developments. The eyes of the world were directed towards the actions of the Roman Catholic church—as they also intended.

A second fact that has emerged from the Council sessions is this: The Roman Catholic church has gained much of the favor of men—both Protestants and even the non-religious. This also was, doubtlessly, one of the aims of this Council.

A third fact: this Council will greatly affect the life of the Roman Catholic church. I believe no basic doctrines have been changed. Nevertheless, the Council has opened the doors to debate and discussion in the Roman Catholic church. I suspect that what will happen will be that which is taking place in many protestant denominations today. While officially holding to the old doctrines, there will be rapid development toward out-and-out modernism. Even the present doctrines of the Romish church must lead to modernism. It is not even surprising to read statements today as this: “The vanguard of Catholic thought today does not expect the parousia to take the form of an apocalyptic event, even in the most distant future. . .”¹ The streams of thought in both protestant and Roman Catholic circles will more and more begin to flow in the same channels. There is an opening through this Council into that period of the ecumenical “church” of the last days.

STATISTICS ON THE COUNCIL

I have in the past presented some of the statistics of the Vatican Council. For your information, it might be advantageous to consider the Council statistics after it has come to its close.

During the first three sessions, only five documents were approved (two during the second session, and three during the third session). The fourth and last session approved a total of eleven documents. Of course, that gives a large mass of material. Probably most of this will not interest us at all either. Therefore, D.V., I intend only to consider a few of the (to us) significant actions taken.

It was on January 25, 1959 that Pope John XXIII first announced his intention to summon the Vatican Council. On Oct. 11, 1962 the first session began its meeting. The sessions usually met from some time in September into the month of December. The final session was closed on December 8, 1965.

Some other statistics (as given in the Council Daybook, Vol. 3) are: there were 168 general meetings at which 147 reports were read and 2,212 speeches were given. There were also 4,361 written interventions. The daily average attendance of bishops was 2,200. In addition to these, there were 460 officially designated experts present. Statistics mean little by themselves. More interesting, it seems to me, are the reactions of the Roman Catholic experts themselves to this Council.

EVALUATION OF THE COUNCIL

First, the brief closing address of Pope Paul is revealing. Especially two significant things can be detected in it. He wants to make sure that all men know the desire of the Roman Catholic church to greet them and welcome them as brothers. Secondly, the speech reflects what is true of most of the decisions of the Council: Christ is forgotten.

This greeting is, before all, universal. It is addressed to all of you assisting and participating here in this sacred rite: to you, venerable brothers of the episcopate; to you, representatives of nations; to you, people of God. And it is extended and broadened to the entire world. How could it be otherwise if this council was said to be and is ecumenical, that is to say, universal? Just as the sound of the bell goes out through the skies, reaching each one within the radius of its sound waves, so at this moment does our greeting go out to each and everyone of you. To those who receive it and to those who do not, it resounds pleadingly in the ear of every man.²

But it is also true that this closing speech, reflecting what I would consider the tenor of the whole Council, shows that there is no room for the Christ. There is a brief reference to Christ and His word of “peace,” but that is all. The Pope would rather place his hope and expectations upon the Virgin Mary.

But note what is taking place here this morning. While we close the ecumenical council, we are honoring Mary Most Holy, the mother of Christ, and consequently, as we declared on another occasion, the mother of God and our spiritual mother. We are honoring Mary Most Holy, the Immaculate One, therefore innocent, stupendous, perfect. She is the woman, the true woman who is both ideal and real, the creature in whom the image of God is reflected with absolute clarity, without any disturbance, as happens in every other human creature.

Is it now perhaps in directing our gaze on this woman who is our humble sister and at the same time our heavenly mother and queen, the spotless and sacred mirror of infinite beauty, that we can terminate the spiritual ascent of the council and our final greeting? Is it not here that our post-conciliar work can begin? Does not the beauty of Mary Immaculate become for us an inspiring model, a comforting hope?²

Of interest too are the comments of Father Hans Kung, a well-known, liberal Roman Catholic theologian. Though he is not wildly enthusiastic about the actions of the Council, he nevertheless appears impressed and pleased by most of the decisions. He has complaints though.

. . .That which the Council did not accomplish need not and cannot be overlooked. There are certain decrees (e.g. the decree on the communications media, the Declaration on Christian Education) which are hardly significant for the future. There are others which lack proportion, which are in many places ambiguous or which simply are not forward-looking. There is probably not a single decree which proved completely satisfactory to the bishops.

In practically all of the doctrinal decrees, a solid exegetical, and often enough, historical foundation is wanting—a price exacted by the almost total absence of Catholic exegesis at the Council. Often enough, diplomatic compromises made a patchwork of precisely the most critical matters—for example scripture and tradition, papal primacy and collegiality. These were compromises between a majority, which generally had the most serious and vital theology on their side and the relatively small curial party which controlled the Council machinery and made thorough use of this control right to the end. None of this should be glossed over.³

There are five areas in which Kung believes accomplishments were made by the Romish church. First, progress, he believes, was made in the area of ecumenism. He claims that the Council expresses that Roman Catholics share the blame for the disunity of the church. He points out that now other Christian communities are recognized as churches. An ecumenical attitude is expected in the Romish church and cooperation with other Christians is encouraged. He concludes: “the ecumenical age has finally and irrevocably begun for the Catholic church with Vatican 11.”³

Secondly, Kung sees achievement in those areas in which the Reformers originally sought change. The Council, he maintains, has placed far greater emphasis upon Scripture than was ever present since the Reformation. He sees in the action taken the development of a liturgy based upon the Word. The Council has given greater esteem to the laity and that popular piety is now more in harmony with that which the Reformers sought. Says Kung, “When we look at this whole area, it is clear that much of what the Council did is of a preliminary, imperfect, even questionable character, and that a number of important things are missing. But it is nevertheless permissible to ask this question: what would Martin Luther do if he were born in the Catholic Church of today?”³

The third area of change deals with those of the non-Christian religions (Jewish, Islam, Buddhism, etc.). Kung sees closer unity between the Romish Church and these of other religions. He also believes that the Romish church has assumed a new attitude toward the world itself. This was especially evident, says he, in the adoption of a document treating religious freedom.

Finally, Kung believes that changes are and will be made internally within his church. There will be a new relationship between Pope and bishops; the Roman Curia will hopefully be reformed; the priesthood will be trained according to the needs of local areas; in mission endeavor, the Romish church will work “toward overcoming the scandal of a divided Christendom, so deeply felt in mission lands.”³

The conclusion of Kung is:

This all-embracing program of reform within the Church adopted by Vatican II will mean a great deal of work in the years to come. But it must not be forgotten that a great deal was not formulated in the decrees and that precisely this may be of greater significance for the next few decades:

1. a new vitality is apparent in the Catholic Church, which transcends any formulations. 2. a new freedom in thought and discussion has shown itself to be extremely fruitful. 3. a new relationship to truth, both more historical and more existential, has become a reality. 4. the fragmentary and contingent character of all documents of the Magisterium was experienced in the concrete. 5. Vatican II quite consciously avoided claiming the infallibility defined by Vatican I. 6. the theology of the neo-scholastic schools showed itself incapable of dealing with new problems. 7. the authority of a vital theology and of the theologians has been decisively strengthened. 8. a new idea of church leadership has become visible on all levels (instead of one-man-rule, common responsibility). 9. the Church has given up characteristically medieval positions in regard to civil society, the state, political life and scholasticism. 10. the justifiable concerns of the eastern churches and of the reformation have now found acceptance within the Church.³

Such is the estimate of a liberal Roman Catholic. He believes that the Council will work toward greater unity between the Roman Catholic church and all men of this world—and I think he is right. 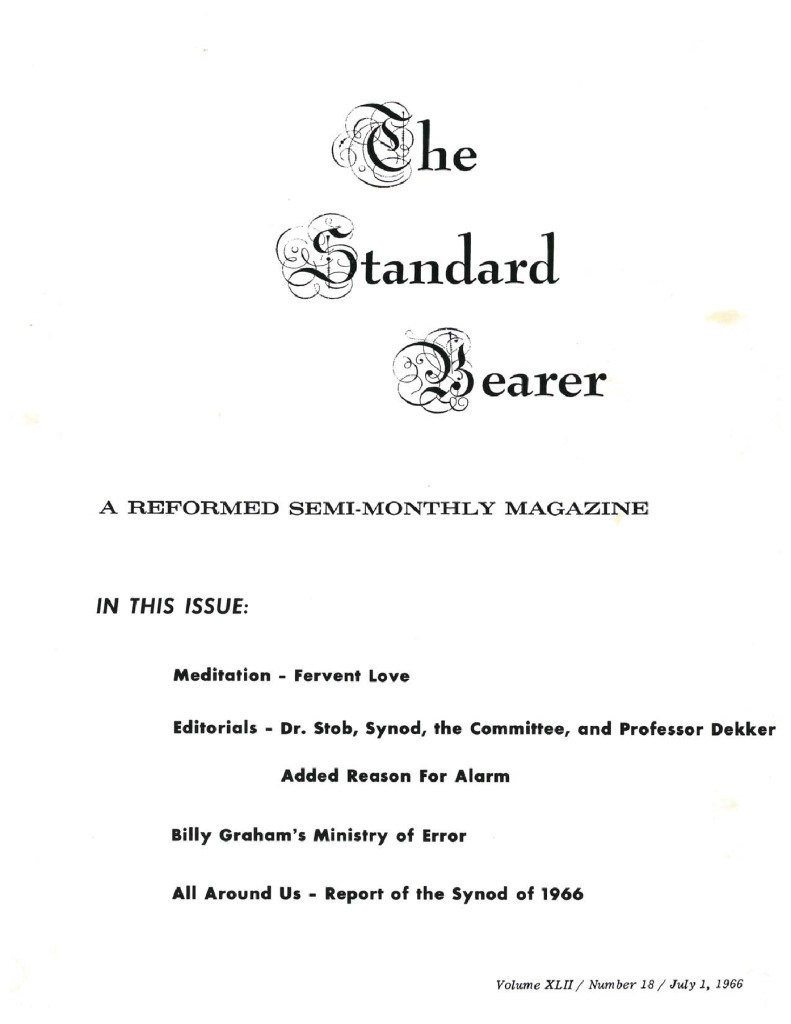