The first Woe unto you! turned itself against the ever ground-gaining pursuit after wealth, goods, and money, against the insatiable lust of adding house to house and joining field to field.

Thus not merely against money-wolves; but against the love of money, which increased hand over hand among our people, and finally infected the most godly.

Consider well, it is always God’s people against which these bitter Woes! are pronounced. Always after the rule of our poet Bilderdyk: “When on account of sin a people must perish, in church begins the soul’s corruption.”

Listen further to the second Woe! of Isaiah, not this time against the slavery of money, but against wealth and wantonness that comes from it.

Woe unto them, so speaks the seer of the Lord:

Woe unto them that rise up early in the morning, that they may follow strong drink, that continue until night, till wine inflame them! and the harp and the viol, the tabret and pipe, and wine are in their feasts; but they regard not the work of the Lord, neither consider the operation of his hands (Is. 5:11, 12).

This second stage of a people’s degeneration and the moral decadence of a nation does not begin with evil intent, but is the unavoidable and the of-itself-following result of too great an accumulation of money and the large growth of fortunes.

For the man himself who accumulated the money is as a rule more saving than extravagant, and still holds himself to the simple manner of life in which he had his early bringing up and training. But when he dies, and the money comes into the hands of his children, it takes in most cases the opposite course.

They do not know their father’s attachment to money; but their desire and longing goads them on to enjoy that money.

In that money there is magical power.

That money will buy worlds of sensual pleasures and delights.

And that hidden virtue of money is what they want out of it. Their father accumulated it, but they, his children, must bring the value of it into evidence.

Then simplicity departs, wealth begins to practice its enchantment, and wantonness is the ash that remains of the charred wealth.

So it was in Egypt and Babylon, so it was in Samaria and Damascus, so it went on in Athens and in Rome; and so, to come nearer home, the Netherlands declined, when reviving from the struggle for freedom against Spain, the treasures of East and West were poured into our laps, and as a consequence, asking after God became ever less and asking after gold ever more insis­tent.

For then in our land also upon Mammon fol­lowed wealth, and after wealth came wantonness, until in the second half of the last century, in our stately houses and old-fashioned country places, life became one not of honor but of shame, to which God has brought an end by letting the French carry away our treasures from us, and by sending Napoleon to us as our scourge.

And now you see the same process again.

Especially in the latter part of this century, money has become plentiful again, and even now, before the century is ended, you see wealth increase again hand over hand, and wantonness follow after in wild drink­ing-bouts and in a sort of theater exhibitions and books that make mockery of all chastity and shame.

Understand well, that this is not said because here and there you find a single excessive plutocrat, or a few conscienceless debauchees.

Such disgraceful characters have always and every­where been known. This, however, does not destroy the nation, so long as the public conscience still reacts and protests resiliently against it.

No, what is avenged, and against which the Woe unto you! goes forth from the Lord of hosts, is when that wealth infects the nation itself in its broader circles, including even the followers of the Lord, and in the pub­lic market of life the serious life-tone of sobriety must more and more lower the flag before the din of sensual pleasure.

Then, among all ranks and stations, play and rec­reation become the sole object at which one aims, the booty of every chase.

Then the people have entered upon the second stage of their corruption. And against this second form of corruption is sounded once again, reproaching and re­calling, the penitential trumpet of the second Woe unto you!

This corruption can only be arrested in its course, either by the judgment that God sends forth and turns riches into poverty, or by the preaching of the Word that loudly sounds the penitential trumpet, arrests people in their wild course, and from heathen morals that creep in calls them back to a quiet, domestic life as becomes Christians.

Improvement does not come from so-called “ennobling of public entertainments,” and still less from vain attempts to exalt the Stage by fine art.

All this sort of means is nothing more than so much mortar, with which one plasters over the crack in the wall of national life to hide the approaching corruption from sight.

A people thus sliding down the incline can no more save itself. For this, in its wealth-weakened system, it lacks courage and elasticity.

It groans under the mode, and as slave of the same it must run along and follow when wealth passes by on the road.

No, salvation of a people lies in that heart of the nation alone that maintains the faithfulnesses, and still trembles at the Word, and holds itself fast by its God.

Jesus Himself testifies: only in that kernel is the salt that can avert corruption.

Not because as people they are so much better than others, but because the Word still has a hold on them, and God’s Holy Spirit is still at work in them.

But this arrest is not brought to effect, save as the power of the Word reveals itself in the households.

Faithful church attendance becomes an empty show, when from church the mind of the Lord is not conveyed to the home.

Therefore it is so beautifully significant that God teaches His people to give, exercises them ever more and more in the practice of giving, makes them give ever more richly and more generously and more abun­dantly because, by that giving, just so much money goes out from the purse, and thereby so much fuel from the furnace of wealth.

He who gives generously and bountifully to the cause of God in the world does not have much left for luxuries, and he holds himself aloof thereby from those companies and associations in which wantonness keeps the bells of the fool’s cap ringing.

The sounding of this penitential trumpet in the preaching of the Word must direct itself therefore to two things in particular: first, much and always yet more giving, and again separation from the world in which wealth and wantonness strike the keynote.

The old and tried wisdom of life on the part of all sober-minded Christians to resist gambling, dance, and theater as inimical powers that stand over against the honor of God’s people. To give the Sabbath to God and not to the world. And in civic virtue and quiet simplic­ity to seek real delight of life.

A wisdom of life, which even yet will stand the test of fire, provided father and mother are not so egotistical as to think: If I but control myself, all is well.

No, especially to the children and to the rising gen­eration must the discipline of life be applied.

For a stigma in the congregation of the Lord are those evil households where father and mother truly reverence bit and bridle, but in which the children are left to grow up wild, counting their baptism as nothing, allowing them to reach maturity not as children of God, but as children of the world.

God’s child also knows of wealth; but it is an altogeth­er different wealth, the wealth of soul, when his heart can enjoy itself in the hidden walk, and in the fellowship of his God.

So it is written in that second Woe unto you!

A people that lets itself be carried off as prey by the wealth of the world “regard no more the work of the Lord, neither consider the operations of His hands.”

When the artificial light of the world still blinds our eye, the glory of the firmament hides itself from us in the dark. So, when the wealth of the world has captured our heart, there dies away in us the taste and the sense for spiritual enjoyment, and we miss the eye to delight ourselves in considering the wonders of the Lord.

This is the righteous punishment that follows at the heel of the gleam of earthly wealth. It shuts you up in the world, and renders the skyline of the eternal, the horizon of the glory of our God, invisible.

So gold takes a people away from their God, and earthly wealth removes them from God’s glory.

They sink away ever deeper. They become ever more obtuse. They lose ever more the gold-dust from their wings!

And so they must either be brought to a stand that they might convert themselves to the living God, or with ever quickening strides they hasten on to judgment in perdition.

A Woe unto you! is no complaint, and no mere warning.

When God pronounces His Woe unto you! upon a people, that Woe unto you! itself is the bolt of lightning wherewith presently He sets that people on fire. 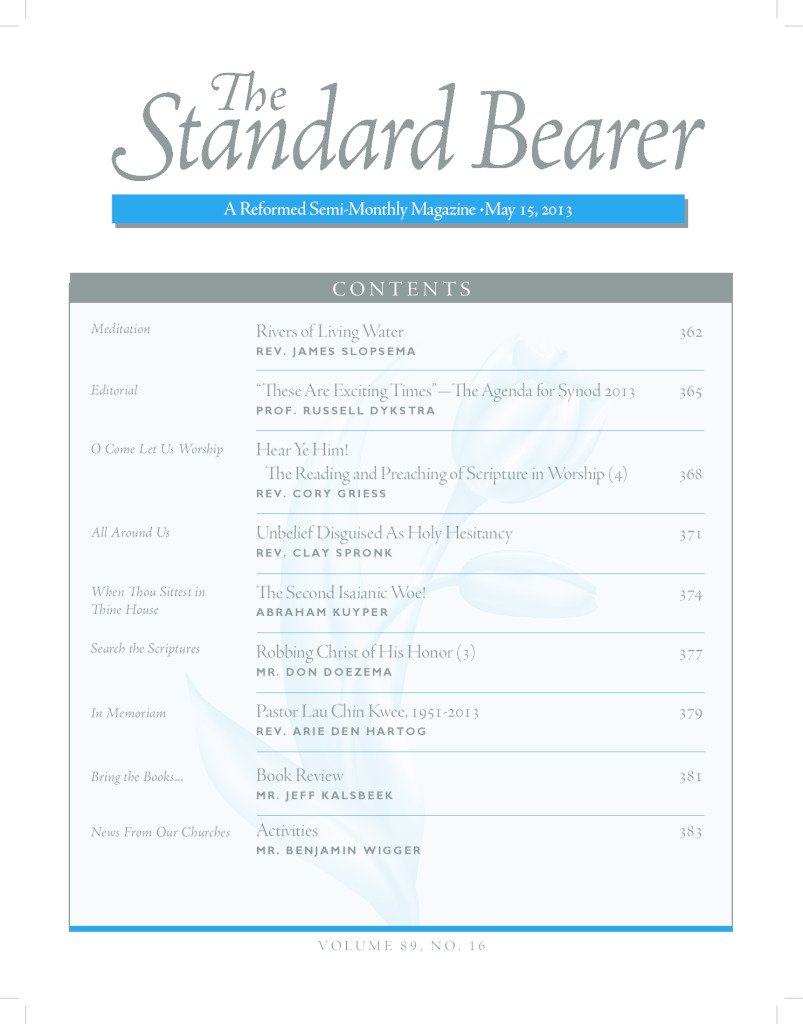