The Second Coming of Christ and Missions

We are reminded, according to I John 2:18 that we live in the last time. That we are living at the very end of time is becoming more evident according to the God-ordained signs of the second coming of Christ.

This certain and imminent return of our Lord has a significant relation to and an important effect upon faithful mission work in our day and age. That there is an important relation between the second coming of Christ and missions was revealed by Jesus Himself in Matthew 24:14, where He says, “And this gospel of the kingdom shall be preached in all the world for a witness unto all nations; and then shall the end come.” The Lord teaches that the gospel of the kingdom will be preached unto all nations. Once the Lord by that gospel preaching has accomplished His purpose and obtained all His good fruit, His final appearing shall come to pass without delay.

First of all, we understand that faithful missions is the official proclamation of the gospel by an ordained and church-sent minister of the Word in a specific field of labor. We expect that such faithful Reformed missions would ordinarily proclaim the final appearing of our Lord Jesus Christ. A Reformed missionary is expected to proclaim the truth about “…the appearing of our Lord Jesus Christ, which in his times he shall shew, who is the blessed and only Potentate, the King of kings and Lord of lords” (I Tim. 6:14b-15). He ought to proclaim that truth routinely, because it is a necessary part of the whole counsel of God concerning our salvation (Acts 20:27).

Since the final appearing of Christ is approaching according to God’s counsel and by His sovereign providence, the content of the preaching must include the admonition to repent. Preaching about the coming Christ and His Kingdom was accompanied by the call of the gospel. This was done by John the Baptist: “In those days came John the Baptist, preaching in the wilderness of Judea, and saying, Repent ye: for the kingdom of heaven is at hand” (Matt. 3:1-2). Another compelling illustration is Jesus Himself, as recorded in Mark 1:15, who preached, “The time is fulfilled, and the kingdom of God is at hand: repent ye, and believe the gospel.”

Both examples of Jesus and John the Baptist show that the announcement of the coming of the kingdom of God, especially in its final appearing, includes a compelling reason for the need to repent: the coming of judgment which always accompanies the coming of the kingdom. That righteous judgment of God is the reckoning for all mankind with God concerning all the things that they have done, whether good or evil. That reckoning results in punishment and wrath for those whom God condemns, and in salvation and blessing for those whom God justifies. Faithful missions must declare that righteousness of God in regard to the kingdom of man’s darkness, of man’s false religions, of man’s unrighteousness, of man’s foolishness, and of man’s totally depraved will. It must declare that righteousness of God in regard to the need to repent from sin, to forsake the world, and to crucify the old nature of man. Along with the call to repentance, there must be the necessary proclamation of the particular and blessed promise of God regarding salvation for those and their children who, as ordained by God, repent and believe in the Lord Jesus Christ alone (Acts 2:38-39).

Concerning our Lord Jesus Christ, faithful missions not only proclaims that Christ is coming again as the promised Lord and Saviour of His people, but also as the righteous and holy Judge (II Cor. 5:10). In the final judgment, Christ will judge righteously according to God’s decrees and eternal good pleasure set forth in the book of life (Rev. 20:12-15). He will condemn His enemies in the kingdom of darkness. He will justify those and those only for whom He died, fulfilled the divine and just demands for their redemption and reconciliation unto God, and in whom He lives and works by His Spirit. He will in His wrath cast His enemies into everlasting shame and punishment in hell, but every one of His sheep He will bring into eternal joy with Him (Matt. 25:46; Belgic Confession, Art. 37).

In addition to those sobering things, faithful missions needs to be teaching the truth regarding the divinely regulated rate at which the final appearing of Christ and the final judgment are approaching. The apparent delay, from a human viewpoint, concerning the return of Christ ought never to be considered as slowness or laziness in the Lord. Such an evaluation is not correct because “the Lord is not slack concerning his promise, as some men count slackness; but is longsuffering to usward, not willing that any should perish, but that all should come to repentance” (II Pet. 3:9). Here we learn that the divinely regulated rate at which the Lord works towards His final appearing, according to God’s eternal purpose, is not “slack,” but “quick.”

This same idea about the rate of Christ’s return is revealed elsewhere in Scripture. In Revelation 22:20a we read that “He which testifieth these things saith, Surely, I come quickly.” This testimony of Christ stands in harmony with the descriptions of His second coming in Matthew 3:2 and I Peter 4:7 as “at hand.” Again, this same idea is repeated in I John 2:18, where the apostle John writes that we are, according to a literal translation of the Greek, “in the last hour.”

In response to what the Lord says regarding the rate of His return, the church must proclaim: “Even so, come, Lord Jesus” (Rev. 22:20b). “Even so” means “even in the same way that the Lord has described His return.”

Accordingly, in obedience to Christ, faithful missions will desire that the Lord return as He Himself described and so declare the same truth of “quickly.” Furthermore, faithful missions needs to set forth the biblical conclusion of “quickly,” namely, that we who now live in the morning of the seventh millennium of history—the third of our New Testament age—do not expect that the Lord will continue history much longer. Accordingly, we expect that in the coming of the heavenly kingdom of God at the final appearing of Christ, this old creation, filled with death, with many memorials to man and his sin, and with many visible scars from man’s total depravity and God’s judgment upon man’s great depravity, will be destroyed by God’s fire. From that destruction, Christ will create miraculously in a moment the new heavens and earth, in which will be established forever His heavenly kingdom of righteousness and peace. Faithful missions ordinarily proclaims that goal to which history is being moved quickly by the Lord.

In the service of the swift movement of history to its appointed end, faithful missions needs to demand from its hearers awareness of the unmistakable proofs of that approaching end. In fact, according to Matthew 24:14, the gospel preaching itself is one sign or proof of the final return of Christ. This understanding is supported by the truth of the opening of the first seal in Revelation 6. The white horse and rider of the first seal in Revelation 6 represent the gospel preaching, which runs its course through the earth, along with the other three horses, under the direction of the Lord at God’s right hand. Since His ascension, the Lord has directed that gospel preaching along its pre-determined racecourse to its goal of His final appearing.

Besides the preaching, there are the other signs of the return of Christ. There is the sign of growing apostasy in the church and a growing unity in the church world in heresy and false doctrine (II Thess. 2:3). There are the signs of the coming again of Christ in the growing lawlessness, increasing public immorality, and increasingly open defiance against creation ordinances. (II Tim. 3:1ff.). War and rumors of war abound. There is the increasing development of the anti-Christian kingdom toward a worldwide government and a worldwide religion in fulfilment of its Old Testament types as prophesied in the book of Daniel. There is an increasing attempt to silence the church from preaching the Word of God against immorality and false religions in the world. In society, there seems to be an increase in strife and civil unrest. In the creation, there are the increasing signs of storms, earthquakes, diseases, and even destructive phenomena in distant stars and galaxies. And more examples of the signs could be given.

All of the signs appear to the eye of faith as infallible proofs that Christ is coming again soon. When the signs occur, they do not set before us deceptions about the second coming of Christ. These things reflect plainly—to those who repent and believe—that Christ’s final appearing, the end of history, the final resurrection, and the final judgment are just over the horizon of history.

Faithful missions, in the content of its preaching, needs to be true to these increasingly occurring, unmistakable proofs of the coming of the Lord in judgment. It should truthfully demonstrate from the signs that we indeed are in the last hour and at the end of time and history. It must refute the false mirages of a future pre-millennial or a post-millennial kingdom of God in the world. Faithful missions must nurture proper watchfulness with godliness as regards the clear signs of the coming of Christ, the Judge. It needs to set forth the biblical, Reformed confessional expectations regarding the great tribulation, the death of the two witnesses in the streets, and the establishment of the worldwide anti-Christian kingdom—Satan’s last and vicious attempt to overthrow the kingdom of Christ.

In so doing, then, believing households, ingrafted into the church of Jesus Christ out of worldly religions, cults, and superstitions, will not be deceived about the future. Instead, they and their generations will be prepared spiritually for the coming and most difficult period of history for the church: the great tribulation before the final appearing of Christ. It will not be a strange sound when faithful Reformed missionaries proclaim in the name of Christ to hearers: “Are you ready to meet this swiftly approaching Lord?”

It will not be abnormal to hear an authoritative call to sinners outside the church institute that they repent, believe in the Lord Jesus Christ, and be baptized, lest they “be ashamed before him at his coming” (I John 2:28). The gospel declaration will be a welcome sound to those who by the grace and Spirit of Christ do repent, believe, abide in Him, and find their refuge in Him alone for this life of tribulation.

When foreign missions, in the sphere of world religions and idolatry, is faithful in the promiscuous proclamation of the particular promise and the general call of the gospel of Christ’s heavenly kingdom, it will undoubtedly, in its effects and fruits, serve the actual coming of Christ itself. This second aspect of the relation between missions and the second coming of Christ we plan to consider next. 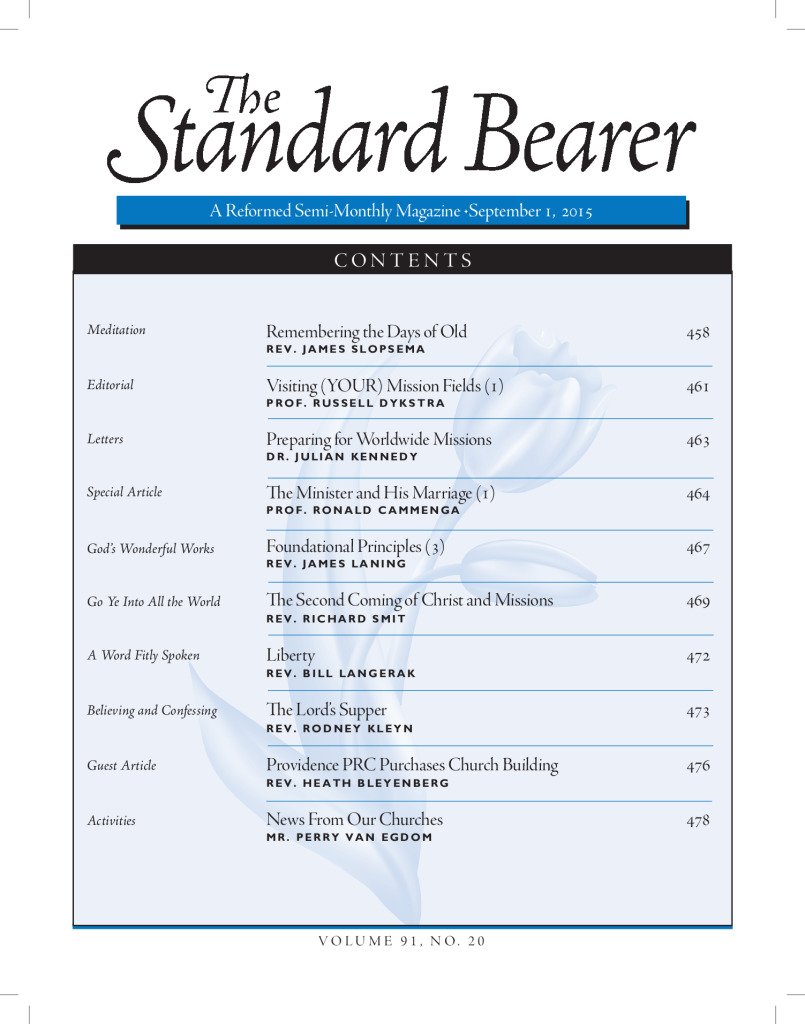