The Second Coming of Christ and Missions (4)

The Second Coming of Christ and Missions (4)

As a way to begin a consideration of this topic, it would be good to reconsider a poorly chosen word at the end of my second article in this series (Feb. 1, 2016 SB, 212). The mistake was the word “perhaps” in the sentence “… perhaps, as the day of Christ approaches, faithful missions will be more and more marked by that success.” The success described there was both the positive and the negative fruits of faithful preaching in missions. In that regard, “perhaps” does not stand in harmony with the Scriptures and our confessions. According to the Word of God, there is no “perhaps” or “maybe” about what the success of faithful missions will be regarding both its diminishing positive fruit and its increasing negative fruit as the day of the final appearing of Christ comes closer.

In that regard, we do not embrace the postmillennial error of some past Reformed clergy, such as the influential Rev. J. Livingston of the Reformed Church America in the 1800s, who taught that the period of 1800-2000 must be seen as the golden age of missions that would prepare the heathen world for a return of Christ.1 Contrary to that, we believe that as it was in the days of Noah, so shall it be in the coming of the Son of Man. That comparison of Christ applies to a number of things, including the fruits of faithful preaching as the last day approaches. Just as Noah’s preaching resulted in no mass conversions and no need for the construction of multiple arks before the onset of the Flood, but rather in the preservation of eight souls (the church at the time), so shall it be in the coming of the Son of Man. As the end nears, the faithful preaching in Reformed missions will more and more be rejected in its battle against the kingdom of darkness, and then silenced, when the prophecy of the two witnesses killed in the street is fulfilled (Rev. 11:7).

According to the Word of God, the success of the faithful preaching of the church of Jesus Christ in missions will unfold in that way. That success, mostly rejection of the Word with an elect remnant gathered by the same Word, is not success as man would reckon it. Nevertheless, this is the expected success according to the will and wisdom of God. This is how history will be led by God in preparation and service for the final appearing of Christ. This is what we expect because so it has seemed good in the sight of our heavenly Father, according to His sovereign good pleasure. He sovereignly determines and regulates that measure of success upon the faithful work of Christ through His church by His Word and Spirit (Matt. 11:25).

Now, does not that perspective extinguish any flames of true, God-centered mission motivation and enthusiasm? Does not Reformed amillennialism, along with its basis in sovereign, electing, particular grace, suffocate the life and activity out of mission work and its support?

It is true that, to our human understanding, the amillennial approach, as regards the realistic fruit of missions at the end of the ages, seems too hard. It is also true that we, with the apostle Paul, have great heaviness and continual sorrow regarding those whom we have known who heard the faithful preaching of the Word of God but rejected it to their destruction (Rom. 9:2). Hence, to expect no mass conversions nor a gradual growth of the church institute towards global domination before the coming of Christ is not a cause for great rejoicing—from the viewpoint of our common total depravity and mankind’s spiritual bondage and ruin in sin, and from the viewpoint of the serious call of the gospel to repent from sin and believe the promise.

Nevertheless, at the same time, the Reformed, amillennial outlook is realistic according to God’s good pleasure and purpose. The same apostle Paul who grieved with regard to his fellow Jews declared with certainty the truth of double predestination, which truth governs the success of gospel preaching, determining that many are called, but only a few actually believe (Rom. 9:6-18). It is on the basis of that truth that the church goes forth with vigorous and steady activity in her missions with the humble petition to the Lord, “Not my will, but Thy will be done.” Success is having the counsel of the Lord done in the outcomes—both negative and positive—of our mission work. When the Lord’s wise and righteous counsel is done, who would dare be gloomy about that?! That prayer and expectation are a real source of motivation for the faithful church of Christ to carry out diligent mission labors while there is still opportunity to do so.

What exactly motivates the faithful church to be busy in mission work? First, the knowledge that faithful mission work serves a victorious cause. What motivation is there for faithful missions in a cause in which salvation is only a possibility or is dependent upon man’s uncertain and impotent “free-will”? In contrast to what an Arminian, postmillennial gospel might promote in its mission work, the truth of the Reformed faith motivates its missionaries to vigorous, diligent, and humble work, in the knowledge that such labor will not be in vain because the cause is victorious in the Lord’s sovereign and good way (Matt. 16:18; I Cor. 15:58).

Moreover, a Reformed missionary is motivated to labor diligently knowing that the Lord will not let any of His chosen people perish, but will bring them all to true faith in Him. This certainty is taught in II Peter 3:9: “The Lord is not slack concerning his promise, as some men count slackness; but is longsuffering to us-ward, not willing that any should perish, but that all should come to repentance.” The “all” and the “us-ward” to whom the Lord is longsuffering and whom the Lord wills to come to repentance are the elect, redeemed people of God. Looking for the Lord, then, to gather His people by His Spirit through the preaching of the Word, a Reformed missionary is motivated to be busy with pure preaching and instruction by all good and lawful means at his disposal, so that he is found of the Lord blameless and faithful.

Although the work of foreign missions is difficult and will become increasingly so, yet the church is motivated to do her work in faithfulness and obedience according to Word of Jehovah to the prophet Jeremiah, who faced similar conditions during his ministry at the time of the decline and end of the kingdom of Judah:

Thou therefore gird up thy loins, and arise, and speak unto them all that I command thee: be not dismayed at their faces, lest I confound thee before them. For, behold, I have made thee this day a defenced city, and an iron pillar, and brasen walls against the whole land, against the kings of Judah, against the priests thereof, and against the people of the land. And they shall fight against thee; but they shall not prevail against thee; for I am with thee, saith the Lord, to deliver thee (Jer. 1:17-19).

With that same word the Lord encourages His church at the end of the ages not to be fearful or slothful regarding any of her work, including the work of foreign missions, even while she expects the realistic twofold fruits on her labors. She may not pilfer the time nor the resources that the Lord has given her. She must press them into the service of faithful preaching and instruction within her local congregations as well as outside of them in missions while there is opportunity to do so. The church must examine herself in this regard. She must examine whether she is doing the work faithfully when the Lord does provide the resources and opportunity. She must examine her labors, and be careful to maintain her mission labors in obedience to the Word of God according to the Reformed standards. This she must do through her calling churches and missionaries in the glorious expectation of the final appearing of Christ, the Lord of the harvest.

This close connection between the swiftly coming day of our Lord and an enthusiastic proclamation of the sharp Word of God by the church in missions was taught at the onset of the New Testament age. At the beginning of the new age of the ingathering of God’s elect remnant from the nations, an unlikely Galilean preacher, filled with the Holy Spirit, stood up and explained the reason for the enthusiasm of the church in its proclamation of the wonderful works of Jehovah in the streets of Jerusalem. The apostle Peter taught that the church of Christ does that with a view to and in service of the great and notable coming of the Lord at the end of history. The eye of the church is fixed on her final redemption. On the day of Pentecost and at other occasions, the apostles regularly connected the final appearing of the Lord to the preaching that they were doing and to the preaching that the church would continue to do faithfully through the rest of the New Testament age unto the uttermost parts of the earth (Acts 2:17-20).

Knowing that the Lord is coming quickly, what shall the church do?

While there is yet opportunity, let the church be busy first in her work in the local congregations, so that then she may be faithful in sending out her missionaries, domestic and foreign, for the proclamation of the swiftly approaching return of our Lord and of the call to repent and believe in Him alone.

In that way of faithfulness by the Holy Spirit and grace of God, we will see that the Lord’s counsel in all of His wonderful works in His harvest is done—not “perhaps,” or “maybe,” but surely. 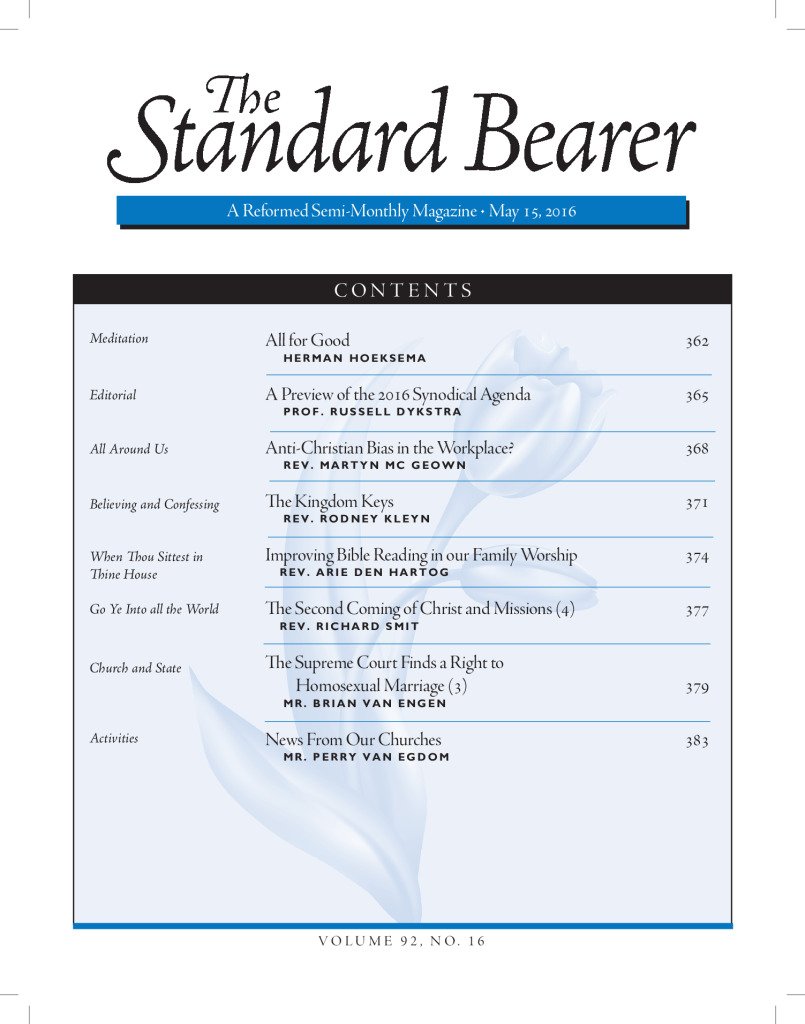