The Seasons of Our Lives

The Seasons of Our Lives

Written by the retreaters from Southwest Protestant Reformed Church.

Though the idea of a seniors’ retreat had been considered for several years, it was the Loveland PRC that took the initiative to lay the groundwork. A committee from Loveland put in hours and hours of planning and much hard work to make the idea of a seniors’ retreat become a reality. The dates for the retreat were set for October 1-6, 2009, and the place chosen was the YMCA of the Rockies in Estes Park, Colorado.

When the time arrived, people traveled from as far north as Edmonton, Alberta; as far southwest as Redlands, California; and as far east as Wingham, Ontario—by car, airplane, motor home, and tour bus. Many of those who rode the tour bus started the trip at Southwest Protestant Reformed Church, Wyoming, Michigan. The bus made two stops along the way to pick up a few people at Peace Protestant Reformed Church in Illinois and others in Omaha, Nebraska. To help pass the time on the long two-day trip, a keyboard had been brought along to accompany singing by the bus passengers. The fifty-five people who rode the tour bus had a very memorable experience.

When the seniors arrived at the camp to check in, the weather was cold and windy, but the warm welcome extended by the Loveland committee made up for the cold and blustery weather. While at the retreat we experienced a sampling of the weather that we have in the four seasons—cold, wind, snow, rain, and sunshine—which fit in with the retreat theme: “Seasons of Our Lives.”

The ages of the “retreaters” ranged from those in the autumn years of their lives, 40 to 60 years (the youngest being 46), to those in the winter years, 60 to 80 years, and those older than fourscore (the oldest being over 85 years), which reminds us of the words of Psalm 90:10, which states, “The days of our years are threescore years and ten; and if by reason of strength they be fourscore years, yet is their strength labor and sorrow; for it is soon cut off, and we fly away.”

Among the highlights of the retreat were the speeches and sermons we were privileged to hear. The speeches dealt with the seasons of our lives. One of the speakers divided the seasons of our lives into the following four categories: Springtime—ages 0 to 20; Summer—ages 20 to 40; Autumn—ages 40 to 60; and Winter—ages 60-80. Following are the speakers and the Bible passages they focused on for their speeches or sermons. On Friday, Rev. S. Key presented the topic the “Springtime of Our lives,” focusing on Isaiah 5:10, 11. On Saturday morning, Rev. R. VanOverloop presented the topic the “Summer of Our Lives,” based on Titus 2. On Sunday, members of the Council of Loveland Protestant Reformed Church supervised the worship services at the YMCA camp. Rev. R. VanOverloop preached for us on Sunday morning, using as his text Philippians 3:13, 14. Prof. H. Hanko preached at our Sunday afternoon worship service on the “Autumn of Our Lives,” using Proverbs 16:31.

We were truly edified and blessed as we worshiped amidst the handiwork of our God in the Rocky Mountains of Colorado. This setting brought to mind Psalm 125:2, which states, “As the mountains are round about Jerusalem, so the Lord is round about his people from henceforth even forever.” On Monday morning Rev. R. Miersma read Ecclesiastes 12 and called our attention to Isaiah 46:4 in speaking of the “Winter of Our Lives.” (In connection with the speech of Rev. Miersma, we call your attention to two things. First, this was the first time he spoke publicly since his most recent stroke and subsequent surgery, and second, his speech is printed in the November 15, 2009, issue of the Standard Bearer.)

Following each speech and Prof. Hanko’s sermon, we had time for a coffee break and fellowship. We then separated into four discussion groups; each group being led by one of the men attending the retreat. The discussions, in which many people participated, were stimulating and beneficial for us in our Christian walk.

After the Sunday evening discussion groups, a singspiration was held. It was wonderful that so many people from so many different churches could join in singing the songs we love and know so well. “O come, let us sing unto the Lord: let us make a joyful noise to the rock of our salvation” (Ps. 95:1). Singing was an important part of the retreat. The previous evening, which was Saturday, we enjoyed singing, from memory, praises to God aswe were gathered around a bonfire in the chilly mountain air.

Other evenings were spent in viewing elk, enjoying a time of good Christian fellowship with old and new friends from other churches, playing games, or having a cup of coffee together in the large fellowship room in one of the lodges. Pictures were taken of all aspects of the retreat, and these were shown on Monday evening, followed by members of the Faith Protestant Reformed Church presenting a “Burma Shave” program. (Let that speak for itself!)

Another activity that stands out in the minds of the retreaters was our trips to the cafeteria three times a day. At mealtimes some of the retreaters who did not ride the bus had one goal—”Beat the bus!” They wanted to get in line at the buffet before all fifty-five people from the bus arrived.

And what a variety of food awaited us. It was so good and so plentiful. And, speaking of food—members of the congregation in Loveland had baked 150 dozen, yes DOZEN, cookies and bars for our coffee breaks, and another fifty dozen cookies were purchased in Michigan and donated. Surprisingly, only five dozen in all were left at the end of the retreat.

Many thanks to the Loveland Protestant Reformed Church for all their hard work and dedication in planning this retreat and making it a reality. Because the retreat ran so smoothly, it may have looked as if organizing and running the retreat must have been a relatively easy task, but we know it was time-consuming and that it required great effort and much work.

It is hoped that in the future we will be able to hold another Seniors’ Retreat, the Lord willing.

Above all, we thank our God for safe travel, for the opportunity to renew old and make new acquaintances, and for making this an enjoyable and spiritually beneficial time for everyone. “Behold, how good and how pleasant it is for brethren to dwell together in unity!” (Ps. 133:1). 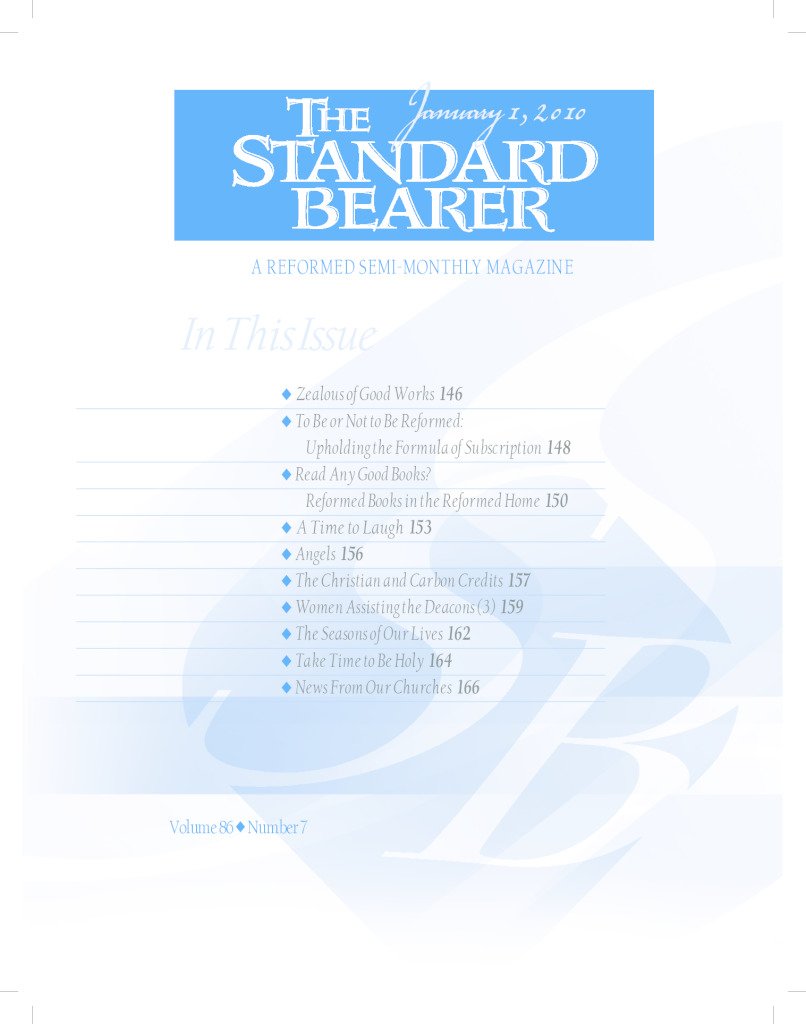