In a previous article (see the October 15, 2000 issue), we treated the history of the Scotch Confession of Faith. That article appeared in the special Reformation issue, October 15, 2000. It may be helpful to reread that article for the background to the present one. In this article, we want to look more closely at the contents of the Scotch Confession.

The Scotch Confession contains all of the important truths common to the creeds that were written in the Reformation era. It affirms all of the doctrines relating to the Trinity and the person and work of our Lord Jesus Christ as they were defended by the early ecumenical councils and embodied in the early creeds, most notably the Apostles’ and Nicene Creeds. In addition, the Scotch Confession holds forth the doctrines of Scripture, sovereign grace, and the church and sacraments made prominent by the Reformation.

To gain an overall view of the Scotch Confession, it will be helpful to list the headings of the twenty-five chapters of the creed.

Chapter II: The Creation of Man

Chapter IV: The Revelation of the Promise

Chapter V: The Continuance, Increase, and Preservation of the Kirk

Chapter VII: Why the Mediator Had to Be True God and True Man

Chapter XIII: The Cause of Good Works

Chapter XIV: The Works Which Are Counted Good Before God

Chapter XVII: The Immortality of Souls

Chapter XVIII: The Notes by Which the True Kirk Shall Be Determined From the False, and Who Shall Be Judge of Doctrine

Chapter XIX: The Authority of the Scriptures

Chapter XX: General Councils, Their Power, Authority, and the Cause of Their Summoning

Chapter XXII: The Right Administration of the Sacraments

Chapter XXIII: To Whom Sacraments Appertain

Chapter XXV: The Gifts Freely Given to the Kirk

This overview makes plain that the Scotch Confession was designed to set forth the convictions of its framers and signatories regarding all of the fundamental doctrines of Holy Scripture. Its focus, therefore, is not narrow but as broad as all of Scripture.

The Character of the Scotch Confession

Before highlighting some of the main teachings of the Scotch Confession, we ought also to take note of the main characteristics of the confession.

Such (true) Kirks, we the inhabitants of the realm of Scotland confessing Christ Jesus, do claim to have in our cities, towns, and reformed districts because of the doctrine taught in our Kirks, contained in the written Word of God, that is, the Old and New Testaments, in those books which were originally reckoned canonical. We affirm that in these all things necessary to be believed for the salvation of man are sufficiently expressed. (Chapter XVIII)

As we believe and confess the Scriptures of God sufficient to instruct and make perfect the man of God, so do we affirm and avow their authority to be from God, and not to depend on men or angels. We affirm, therefore, that those who say the Scriptures have no other authority save that which they have received from the Kirk are blasphemous against God and injurious to the true Kirk, which always hears and obeys the voice of her own Spouse and Pastor, but takes not upon her to be mistress over the same. (Chapter XIX)

Besides being explicitly biblical, the Scotch Confession is also warmly personal. What is affirmed is not cold, abstract dogma. But the creed sets forth the living faith of the church, as that faith is believed and confessed by the individual members of the church. Most of the articles begin with “We confess….” or “We confess and acknowledge….” or “We hold….” Faith is not considered to be mere assent with the head, but conviction of the heart. The truth of Scripture is presented as the truth which is embraced by the believer, which is the strength and support of his life, and which is the faith for which he is willing to die. The history of the Reformation in Scotland prior to the adoption of the Scotch Confession provides scores of examples of Reformed Christians who did just that.

Third, the Scotch Confession is pointedly polemical. The confession exposes false doctrine and repudiates the teaching of the false church and the sects of the day. The creed does not content itself to be only positive, but takes seriously the biblical calling to try the spirits. This is done in a fair way, the way in which polemics must always be done. The positions of those with whom the creed takes issue are accurately represented, to the credit of its framers. But it is done. On the one hand, Rome and its many perversions are warned against and rejected. And on the other hand, the wrong views and practices of the Anabaptists are also renounced.

And fourth, the Scotch Confession is decidedly instructional. The purpose of the creed was not only to serve as a statement of belief to the world outside of Scotland. But its purpose was also to provide a means of instruction for the members, and especially the youth, of the Scottish churches. The new—found freedom to exist openly, which the churches of the Reformation in Scotland enjoyed, must be taken advantage of. The great truths of the creed must be preached and taught to the people.

The Doctrines of Sovereign Grace

Prominent place is given in the Scotch Confession to the doctrines of sovereign grace. In this respect the confession shows itself to be thoroughly Reformed.

The confession sets forth the Reformation teaching of the total depravity of man, and therefore man’s complete inability to contribute to his own salvation. The following two citations will serve to illustrate this point.

By this transgression, generally known as original sin, the image of God was utterly defaced in man, and he and his children became by nature hostile to God, slaves to Satan, and servants to sin. (Chapter III)

For by nature we are so dead, blind, and perverse, that neither can we feel when we are pricked, see the light when it shines, nor assent to the will of God when it is revealed, unless the Spirit of the Lord Jesus quicken that which is dead, remove the darkness from our minds, and bow our stubborn hearts to the obedience of his blessed will. (Chapter XII)

The total depravity of man necessitates the sovereignty of God in salvation. In line with the other great creeds of the Reformation, the Scotch Confession affirms that the sovereign decree of God is the cause of salvation. The creed breathes sovereign election. Over and over again the members of the church are referred to as God’s “chosen.” (Cf. Chapters III, VIII, XIII, XVI, XVII, XXI, and XXV.) In Chapter VIII the truth of election is set forth.

That same eternal God and Father, who by grace alone chose us in his Son Christ Jesus before the foundation of the world was laid, appointed him to be our head, our brother, our pastor, and the great bishop of our souls…. Therefore we are not afraid to call God our Father, not so much because he has created us, which we have in common with the reprobate, as because he has given unto us his only Son to be our brother, and given us grace to acknowledge and embrace him as our only Mediator.

Already in connection with the work of Christ, it had been stated in Chapter VII:

We acknowledge and confess that this wonderful union between the Godhead and the humanity in Christ Jesus did arise from the eternal and immutable decree of God from which all of our salvation springs and depends.

In line with God’s eternal decree, the death of Jesus Christ was a limited atonement. This is affirmed in Chapter IX of the Scotch Confession that deals directly with the passion and death of the Savior. The main line of argument here, as is the case in other of the Reformation creeds, is the clear teaching of Scripture that Christ’s death was real atonement. His death was the real satisfaction for the sins of all for whom He died. The fruit of Christ’s death is that all for which He died are “…absolved before the judgment seat of our God.” The conclusion of this chapter is: “From this we confess and avow that there remains no other sacrifice for sin; if any affirm so, we do not hesitate to say that they are blasphemers against Christ’s death and the everlasting atonement thereby purchased for us.”

The grace of God worked out in Christ’s atonement is applied irresistibly by the Holy Spirit to elect sinners. The Scotch Confession affirms irresistible grace.

Our faith and its assurance do not proceed from flesh and blood, that is to say, from natural powers within us, but are the inspiration of the Holy Ghost; whom we confess to be God, equal with the Father and with his Son, who sanctifies us, and brings us into all truth by his own working, without whom we should remain forever enemies to God and ignorant of his Son, Christ Jesus. (Chapter XII)

It is the Spirit’s work in us that produces whatever good comes from us.

The cause of good works, we confess, is not our free will, but the Spirit of the Lord Jesus, who dwells in our hearts by true faith, brings forth such works as God has prepared for us to walk in. (Chapter XII)

At the same time, the Spirit’s presence in us does and must produce good works.

For we most boldly affirm that it is blasphemy to say that Christ abides in the hearts of those in whom is no spirit of sanctification. Therefore we do not hesitate to affirm that murderers, oppressors, cruel persecutors, adulterers, filthy persons, idolaters, drunkards, thieves, and all workers of iniquity, have neither true faith nor anything of the Spirit of the Lord Jesus so long as they obstinately continue in wickedness. For as soon as the Spirit of the Lord Jesus, whom God’s chosen children receive by true faith, takes possession of the heart of any man, so soon does he regenerate and renew him, so that he begins to hate what before he loved, and to love what he hated before. (Chapter XII)

Those whom God has chosen, for whom Christ has died, and who are indwelt and gathered by the Holy Spirit are also preserved in salvation. “We most surely believe that God preserved, instructed, multiplied, honored, adorned, and called from death to life his Kirk in all ages since Adam until the coming of Christ Jesus in the flesh” (Chapter V). The assurance of the preservation of the church as a whole and of every individual believer rests squarely on the sovereignty of God, the cornerstone of the Reformed faith.

The Scotch Confession ends with a fitting and beautiful prayer.

Arise, O Lord, and let thine enemies be confounded; let them flee from thy presence that hate thy godly Name. Give thy servants strength to speak thy Word with boldness, and let all nations cleave to the true knowledge of thee. Amen. 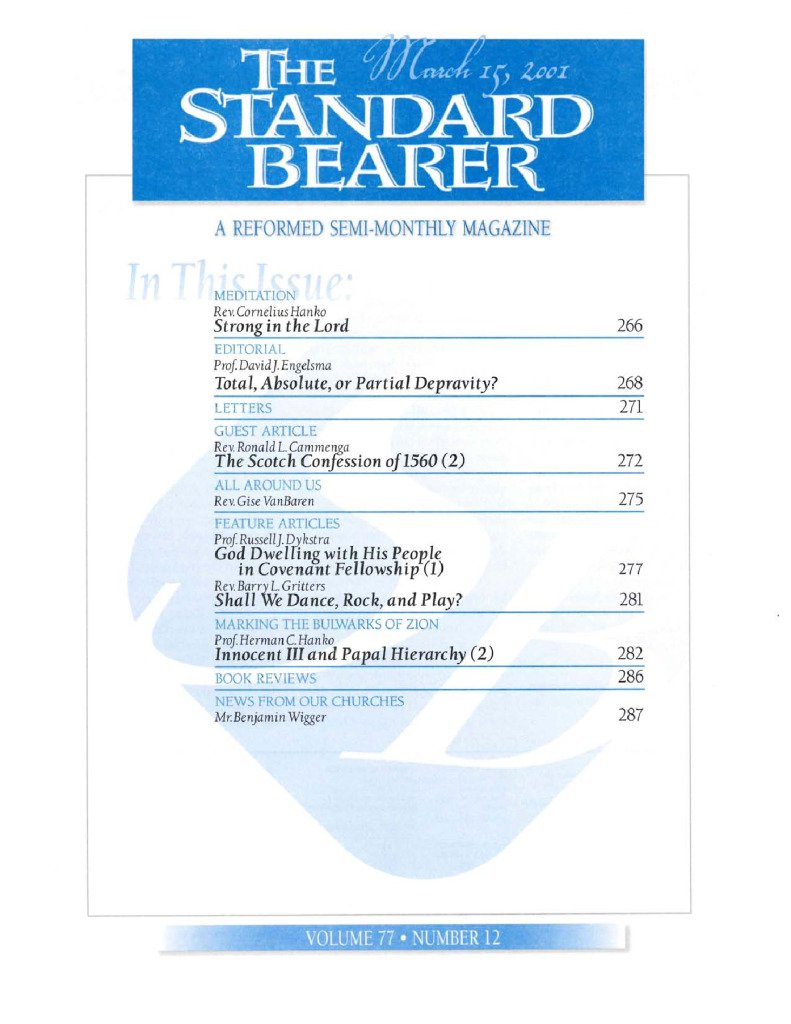