“The scepter shall not depart from Judah”

“The scepter shall not depart from Judah”

“The scepter shall not depart from Judah, nor a lawgiver from between his feet, until Shiloh come; and unto him shall the gathering of the people be.” Genesis 49:10

These are the words of an astounding prophecy from our great God Himself! These words spoken by Jacob were a prophecy. To be sure, they were not just a dying man’s words, though it is true that Jacob was dying. And in his dying, we know from Hebrews 11 that he worshiped God, leaning upon the top of his staff and blessed the sons of Joseph. A tremendous twofold act of faith that was, but so also was the utterance of these words!

This was a prophecy! Prophecy, that is, being a statement from and by God Himself—of something that will be true in the future, of something that is surely going to take place. And here it is that the scepter will ever abide with and not depart from Judah.

Further, this was a special prophetic word given to Jacob, one who was not explicitly a prophet of God. Yet, we may be sure that he was no less given a prophecy from God Himself to speak concerning Christ. There is the sure, authoritative tone of Jacob pronouncing blessing in verses 1 and 2, and also in the pronouncing of divine curse in verse 6, just as there is sure certainty in verses 9 and 10. And, as we will see, that this was a divine prophecy from God is demonstrated by the Word of God maintaining the truth and veracity of this Word down through history.

The prophecy concerns the “scepter” and the “lawgiver.” What is the scepter and what is the lawgiver? The word “scepter” is really the same word as the “rod” of the shepherd. This is not the “staff” of the shepherd that is used to guide the sheep, but the “rod” that is used to protect the sheep from threats and dangerous animals by beating them away. In close connection with that idea, the word here is referring to the short decorative rod of a monarch or king, which is the emblem and symbol of the king’s sovereign power and rule. The scepter, therefore, speaks of a king, and specifically the king’s sovereign power and rule.

This sovereign power and rule of a king is developed by the phrase following, “nor a lawgiver from between his feet.” What is the idea of the “lawgiver”? The “lawgiver” refers to the scepter of the king. For the “lawgiver from between his feet” is a figurative description of a longer scepter that a king (especially from oriental lands) would hold also as a symbol of his sovereign power and rule. In addition, it also carries this further idea of law-giving; and law-giving as a king, as we find in Isaiah 33:22: “For the Lord is our judge, the Lord is our lawgiver, the Lord is our king; he will save us.” In the king’s sovereign power and rule, symbolized by that scepter, the king enacts laws to govern his kingdom. And not to be overlooked is also the fact that he has the teeth to enforce it. This law-giving aspect of the king speaks of his righteous authority. Accordingly, the scepter and the lawgiver spoke clearly of a king not only to us, but also to all the sons of Jacob: where there is a scepter and lawgiver, there is the king! In summary, God’s Word sets forth the sovereign power and rule of the king, and also his law-giving character, speaking of his righteous authority!

This is the prophecy in view, and is altogether astounding—in three ways.

First, this is astounding when you consider the family to whom this prophecy is given, the prophecy of the king with his scepter! This prophecy was not given to a family with royal blood, not even to a family that was rich or noble and had some decent place or ranking in society. But it was given to the family of a poor shepherd, struggling to obtain food, using whatever they had for travel, and leaving the land of Canaan to come into Egypt for that food. This lowly shepherd’s family was more like helpless beggars. But it is to them that God gives this prophecy of a scepter-wielding king—sovereign and powerful, and with righteous authority!

Second, it is astounding also when you consider to which son of Jacob it is given to. It was not given to the oldest son, Reuben. Neither was it given to the next two sons in line, Simeon and Levi—these received curses instead! Nor was it given to the wisest and godliest son, Joseph. But it was given to Judah! Judah, who was not even a son of favored wife Rebekah, but of Leah. Judah, who, though he turned his brothers from their purpose to kill Joseph, nonetheless persuaded them to sell him as a slave to the Midianites at Dothan. Judah, who was a fornicator with daughter-in-law Tamar. Judah was a wretched and guilty sinner! He had no right to obtain a blessing. But he did. For this promise of a mighty, righteous scepter-wielding king comes to him!

Is it not also the same with you and with me, dear reader? We do not deserve any of God’s covenant promises of salvation. God graciously gives them to us because, like Judah, we do not deserve them. The only explanation for this is God’s sovereign good pleasure. He does so in His wondrous, sovereign, particular love and mercy!

Third, this is an astounding prophecy when you consider the non-departing, everlasting nature of this scepter, and thus the everlasting nature of this King and His kingdom symbolized by it. We all know that kings and kingdoms rise and fall. That is true from the very least of kings and kingdoms to the very greatest: the Roman empire, the British empire, and most recently, Hitler’s great Nazi empire all came to an end. But not this scepter, and not this King and kingdom promised to Judah, according to verse 10a.

But what about verse 10b, “until Shiloh come: and unto him shall the gathering of the people be”? Does it mean that the scepter shall not depart from Judah, but when Shiloh comes, it will? No. For this Shiloh who is coming is the Messiah! He is the Prince of Peace, as Isaiah 9:6 describes him, for “shiloh” means “peace.” So, what verse 10b is saying is that the scepter of this kingdom will not depart from Judah, but when the Messiah, the Prince of Peace and Priest-King comes, that earthly scepter of the king, picturing this true kingly Messiah of God Himself, and from the line of Judah will give way to the real heavenly, everlasting scepter of the real King, King Jesus! And unto this heavenly King of His heavenly kingdom shall something great take place: “unto him shall the gathering of the peoples be.” Note the plural: “peoples.”

Can you imagine how astounding that was to the ears of Judah and his brothers? A lowly family that was going to be blessed as a people and nation, the nation Israel. That they knew. But now added to that comes this astounding, all-embracing nature of this scepter-wielding King and His kingdom. It will be a truly catholic, universal, international kingdom!

That day will surely come! And this amazing prophecy will be marvelously realized! Much of it has already been. Let us trace its marvelous realization in the Old Testament. It was realized through the time of slavery in Egypt, through the exodus out of Egypt, and in the wanderings in the wilderness. And amazingly, it was renewed through Baalam in Numbers 24:17: “I shall see him, but not now: I shall behold him, but not nigh: there shall come a Star out of Jacob, and a scepter shall rise out of Israel, and shall smite the corners of Moab, and destroy all the children of Sheth.” It continued to hold steadfast through the time of judges, when righteousness and authority seemed so wanting, and every man did what was right in his own eyes.

But above all, it became clearly manifest in the period of the kings and kingdom of the nation Israel. It did not manifest itself in King Saul: he was from the tribe of Benjamin, and not Judah. But it became manifest especially in the kingship of David, and his son Solomon, who hailed from the tribe of Judah. How the scepter of David so displayed the righteous authority spoken of in this prophecy! For David was the righteous lawgiver who enacted God’s righteous laws in his kingdom and also enforced them. And how the scepter of Solomon especially displayed the sovereign power and rule of this king and his kingdom! For under Solomon’s rule, the kingdom of Israel expanded and reached out to its outermost boundaries. The sovereignty, power and rule of the scepter of Solomon and of Judah was clear for all to see!

But shortly after that, things took a turn for the worse. The kingdom became divided, the kings of the northern kingdom were all wicked, and then too, gradually, the earthly scepter of Judah seemed to wane when the line of Judah’s kings petered out. God’s people were carried away captive to Babylon! And even after they returned to the land of Canaan, they did not have a king, but only a governor. In all this history of the earthly type and its scepter failing, God was laying the foundation of the appearance of the true heavenly Scepter and Scepter-wielding King, Jesus Christ!

In fact, God laid the foundation for the coming of Shiloh, King Jesus, from the very beginning of time. For in the failure of our father Adam, who was the crown jewel and king of all God’s creation, was already the foundation laid for the second Adam, the true Jewel and King of God, the Seed of the woman! David and Solomon—great kings as they were—both had their own sins and failures. They were not the real king, wielding the real heavenly scepter, but only dim pictures of Him!

One great clue to this all-abiding, non-departing nature of the Scepter is how God would have His church through the ages sing of it in His holy, inspired songbook, the Psalms. She does that in particular in Psalm 110, as we have it versified in Psalter #303:

The Lord unto His Christ hath said,

Sit Thou at My right hand

Until I make Thy enemies

Submit to Thy command.

A scepter prospered by the Lord

Thy mighty hand shall wield;

From Zion Thou shalt rule the world,

And all Thy foes shall yield!

Shiloh came! The Prince of Peace, heavenly Counselor and King of God, Jesus the Christ came! That earthly scepter left for dead through the centuries, Christ picked up and transformed to His heavenly scepter! But He would be crowned and ascend to His heavenly throne only in the way of humiliation: His lowly birth, His life-long sufferings, and above all His crucifixion and death on the cross! In that way, He would be raised and lifted up! From the dead to glorious, heavenly life! And then, lifted up and ascended into heaven at God’s right hand! And He who is now exalted in heaven above will come again—Shiloh will come again! And then, His crown and scepter, His kingship and kingdom, will be perfectly realized!

Marvel at this wonderful realization! In the way of all that history, when all seemed lost time and time again: in the slavery of God’s people, in the failure of the earthly kings from the line of Judah, in the inter-testamentary period of 400 years. But also beyond all comprehension and expectation, in the way of God becoming man, one of His lowly creatures—this astounding prophecy made unto Judah would be realized! 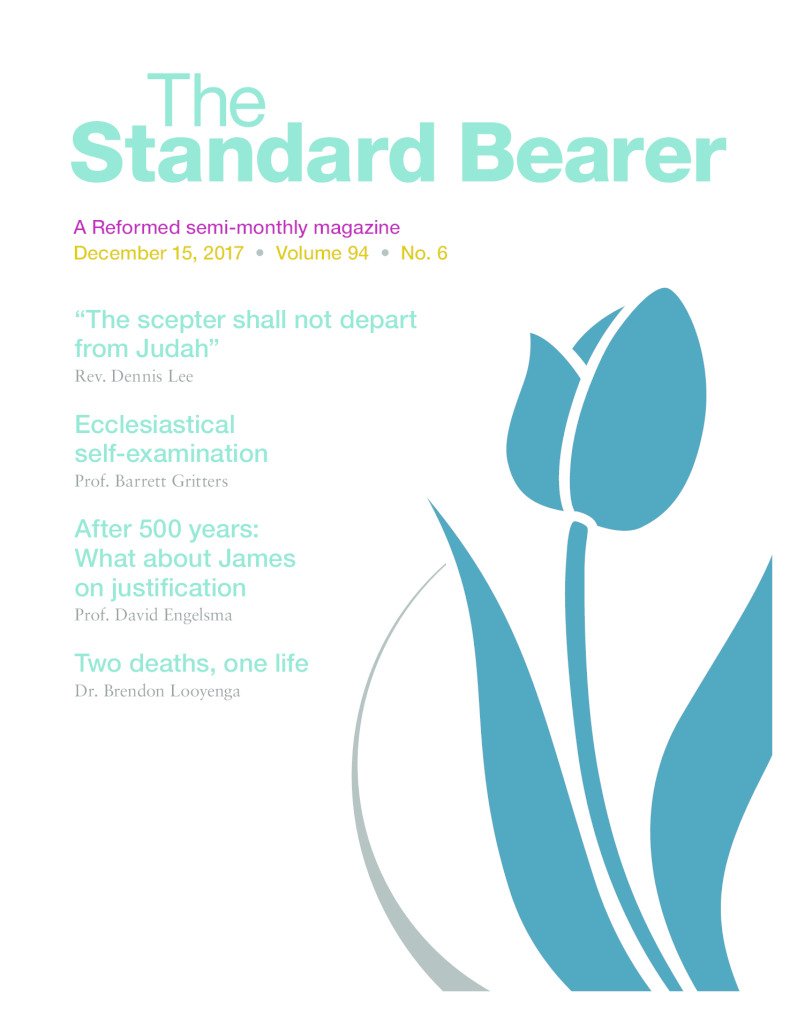