In our last article we made mention of the report of the committee of pre-advice, submitted to the Synod of the Christian Reformed Church in 1926, and dealing with the matter of Classical jurisdiction or authority (Art. 36). This report was the fruit of the committee’s labor over a double report by a study committee that could not arrive at agreement in its conclusions. It was finally in consequence of the report of the committee of pre-advice that the Synod acted, upholding Classis Grand Rapids West in its action of deposing the Consistories of Kalamazoo and Hope.

All of these reports are rather lengthy. They appear in the Agendum and Acts of Synod, 1928, in the Holland language. Because of this the present English-speaking generation is unacquainted with their contents. We will, therefore, attempt to freely translate these reports for the benefit of our readers. Any corrections in translation will be gratefully acknowledged. Here follows the report of the study committee which consists of two parts:

Does a Classis have the right to depose a Consistory?

“To this question a negative answer can be given, if a Classis is truly considered as a higher rule, with a higher power, seemingly autocratic and imperative, as the Classes of the collegialistic Netherlands Reformed Church. But in Reformed Church circles the Classes do not bear such a character. The answer to this question depends on, the character of the local church and that of the broader gatherings in their reciprocal relation. We must proceed from our Church Order and this we must explain according to Reformed principles which form its basis.

(1) The general and main principle is that Christ is the King, Law-giver aged Ruler of the church. Article 28, D.K.O.

He has instituted her. She is his possession. He alone has sovereign power over her. He alone rules over the church jure suo. Therefore, in the church His will alone applies which He has revealed through His apostles in the New Testament. This is the law for the church The Church Order is no law but an arrangement of rules concerning the manner in which the church, according to the demand of Christ, must act. All that is taken up in our Church Order must be explained from the main principle that Christ is the King of the Church. The whole content of this report is determined by this main principle.

(2) The Relation of the Church and the Officebearers (Consistory)

The church is not a society which chooses agovernment (bestuur) which it charges to carry out that which the society decides. In Reformed Denominations, inherent (inklevende) authority does not reside in the church so that she can appoint officebearers to whom she gives the mandate to execute her will. Neither does she have a working (bedienende) authority so that she herself can make ecclesiastical (kerkrechtelijk) decisions and execute them. Nowhere does Scripture or our Church Order teach that the church is an ecclesiastical (kerkrechtelijk) body and that Christ has commissioned her with working power to censure and excommunicate members or officebearers. This right does not lie in the membership but in the office which Christ, through the apostles, has instituted in the church. Regarding the rights and duties of the church as a whole, the officebearers are representatives of the church (Church Order, Article 11). Yet, not in the sense that they receive the office as a charge of the church. The office is an ordination of Christ in the church and has not arisen out of the church. The officebearers are servants of Christ. They work for Christ in the behalf of the church and not for the church in the behalf of Christ.

Secondly, every member of the church has the right and the duty to judge, according to the Holy Scriptures and the accompanying Confessions and Church Order, the work and life of the officebearers because the church in the New Testament is a mature church since she, on the day of Pentecost, received the Holy Spirit by whom she can consciously judge. We can add yet to this that the church can withdraw from a departing (afwijkende) consistory when the latter persists. Yet this lies outside the question of this report.

In relation to that question, the principal matter of this second point is that the church is not an ecclesiastical (kerkrechtelijk) body and thus cannot depose officebearers (consistory). From the main thought—who puts into office can alone depose from office—it follows that Christ’s officebearers can be deposed from office only by Christ.

We refer here to Articles 4 and 22 of the Church Order where the election of ministers, elders and deacons is treated. Further, to the form of the call-letter for ministers, in our church as well as in the Reformed Churches of the Netherlands. The form in the Netherlands speaks loudly . . . ‘The consistory . . . . at present-lawfully assembled . . . . noting the result of the election . . . . has seen fit to call, as it calls, by these . . . .’ And, finally, according to the Forms used for Excommunication and Readmittance, we find this: ‘Therefore we, ministers and rulers of the church of God, here gathered in the name and authority of our Lord Jesus Christ, declare . . . .’

(3) The Power of the Consistory

Whenever the question comes up in a consistory whether censure is to be applied to a member or officebearer, no Reformed Consistory gives consideration to calling a congregational meeting or seeking the advice of the congregation about this. Each consistory knows that this is a purely official matter that belongs to the consistory (Articles 76-79, D.K.O.).

The authority of the officebearers, i.e., of the consistory, is the only ruling power in the local church as well as in the churches in unity of denomination. There is, according to our Reformed conception, no other ruling authority in the church, neither lower .nor higher. With this in view the consistory of the local church is sometimes called autonomous. Against this many objections are raised because the word autonomy literally denotes that one is absolutely independent and a law-giver unto himself. In this literal sense the term cannot be used with reference to the local church or consistory. If men use this term to express that each local church is an independent(zelfstandig) manifestation of the body of Christ, there B not objection, but if men want to thereby say that every local church and consistory is wholly independent and stands separate from the other churches and consistories, this would be in conflict with the conception of our Church Order in Article 36.

In Article 84 it is said against Rome that all churches and all officebearers are equal (gelijk) so that one may not lord it over the other, Yet the Church Order does not deny in this article that the church in an ecclesiastical manner (in kerkrechtelijke zin) can arid must work together with other churches with respect to all that belongs to their common labors.

With a view to the question which we in this report must answer, we let the latter rest and speak only of the former, namely, cases in the local church which the consistory alone cannot finish. In the Church Order, Article 79, such cases are mentioned. According to this article a consistory alone may not depose an elder or deacon except with the assistance (medewerking) of a neighboring consistory. In this case the latter has the right to mutually decide.

Article 79 states further that a double consistory has the right to suspend a minister but whether he will be deposed altogether from office shall depend on the judgment of the Classis with the advice of the Synodical deputies (Art. 11, D.K.O.).

The Church Order in Articles 30 and 31 teaches the limitation of the authority of the local church in:

(2) cases which belong to the churches of the broader gathering in common;

From all this it follows: First, that the authority of the consistory is not adequate (voldoende) and independent in various cases in the local church; secondly, that these cases, namely, those that belong to the churches in common, are related to differences concerning doctrine and life, and are connected with the discipline and, therefore, are ecclesiastical (kerkrechtelijk) in character: thirdly, that to the Classis is given the ecclesiastical (kerkrechtelijk) authority to pass judgment over the differences of doctrine and life.”

Note by the editor.

The above article was sent to me for the Oct. 1 issue, but was overlooked by me. I am very sorry for the mistake and apologize. The reader should read the above article, therefore, before the one printed in the Oct. 15 issue. 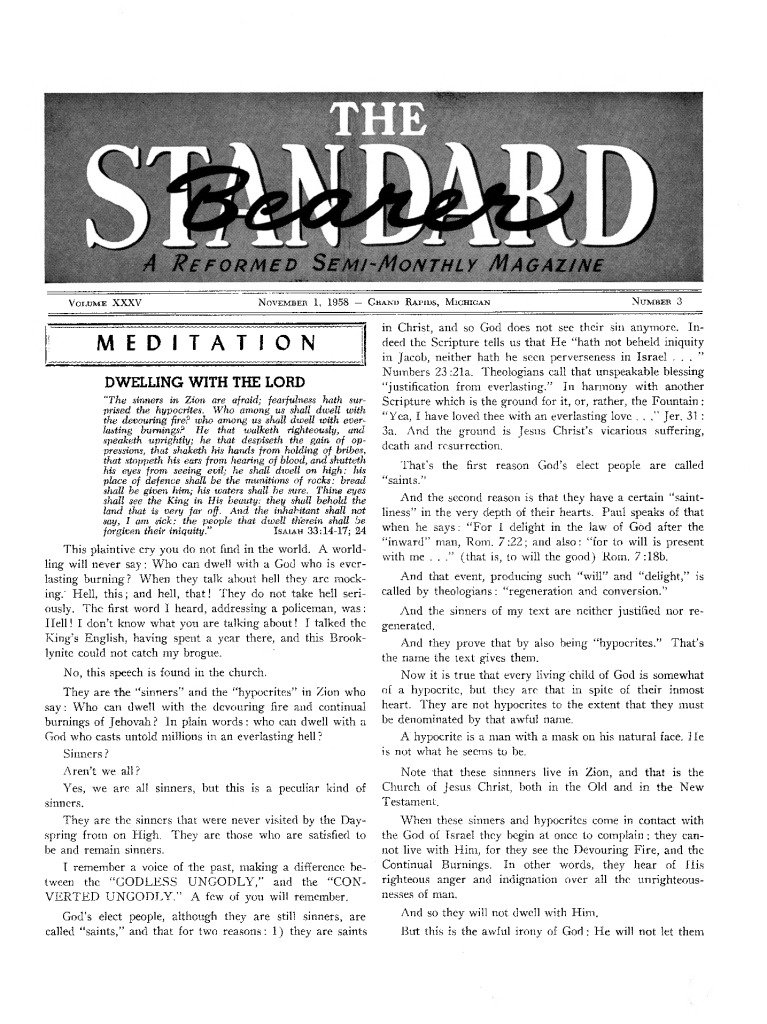