The Religious Case for Gay Marriage

The Religious Case for Gay Marriage

he title for this article comes from the cover story ofNewsweek magazine December 15, 2008. It included lots of glossy pictures of married bliss of young and old gays and lesbians. “What,” you say, “a liberal American magazine is going to try to make a religious case? They are going to make an argument from the Bible?” When one starts reading the story, he will immediately see that the author of the story, Lisa Miller, is obviously one who has little or no use for religious conservatives or for the Scriptures that we hold dear.

Looking to the Old Testament, Ms. Miller quickly discounts it. She begins, “Shall we look to Abraham, the great patriarch, who slept with his servant when he discovered his beloved wife Sarah was infertile? Or to Jacob, who fathered children with four different women (two sisters and their servants)? Abraham, Jacob, David, Solomon and the kings of Judah and Israel—all these fathers and heroes were polygamists.”

Miller then argues that the New Testament model is hardly better. Why? “Jesus himself was single and preached an indifference to earthly attachments—especially family. The apostle Paul (also single) regarded marriage as an act of last resort for those unable to contain their animal lust. ‘It is better to marry than to burn with passion,’ says the apostle, in one of the most lukewarm endorsements of a treasured institution ever uttered.” The author finally, after this tirade, asks, “Would any contemporary heterosexual married couple…turn to the Bible as a how-to-script?” And her answer is, “Of course not, yet the religious opponents of gay marriage would have it be so.”

In this battle over gay marriage, California recently legalized it, but a ballot initiative in November amended the California constitution to prohibit it. The worst of it is what Lisa Miller calls the “religious-rhetoric slinging” that enters into the full scale war. She laments that, sadly, all the religious rhetoric seems to be on the side of the gay-marriage opponents, who use Scripture as the foundation for their objections.

What is the religious argument? Miller quotes a United Methodist minister, Rev. Richard Hunter: “The Bible and Jesus define marriage as between one man and one woman. The church cannot condone or bless same-sex marriages because this stands in opposition to Scripture and our tradition.”

How does Miller react? She has two responses: 1. “While the Bible and Jesus say many important things about love and family, neither explicitly defines marriage as between one man and one woman.” 2. “As the examples above illustrate, no sensible modern person wants marriage—theirs or anyone else’s—to look in its particulars anything like what the Bible describes.” The gist of Miller’s cover story for Newsweek is that while opponents of gay marriage often cite Scripture, what the Bible teaches about love argues for the other side. She writes that “the Bible is a living document, powerful for more than 2,000 years because its truths speak to us even as we change through history. In that light, Scripture gives us no good reason why gays and lesbians should not be civilly and religiously married—and a number of excellent reasons why they should.”

We need to look first of all at her attitude toward the Scriptures: “a living document, powerful for more than 2,000 years because its truths speak to us even as we change through history.” What is a living document? What does it mean when she says that its truths speak to us? What does it mean that the Scriptures speak even as we change through history? Second, we will have to look at the case she tries to make. What is her argument? And finally, as those who have been given grace and faith to hear what the Spirit has to say to His church, we will have to make the case why such illicit sexual relationships are an abomination to God and should also be to those who love Him and honor His Word.

First, there is Miller’s view of Scripture. Quoting liberal theologians, she insists that “the Bible was written by men and not handed down in its leather bindings by God.” In Old Testament days, marriage was the arrangement between “one man and as many women as he could pay for.” The verse “Therefore shall a man leave his mother and father; and shall cleave unto his wife, and they shall be one flesh” was written by people for whom polygamy was a way of life. As for the text “Be fruitful and multiply” as an argument that homosexual couples cannot procreate, the Bible authors simply could never have imagined the brave new world of international adoption and assisted-reproductive technology. The “truths” of the Bible, which can only speak to us who change through history, are relative truths that need to be reinterpreted and reapplied by each culture and age. Jesus is pictured as merely a man who was unmarried and who preached a radical kind of family, a caring community of believers whose bond in God superseded all blood ties. The apostle Paul is written off as one who was unmarried and who “echoed the Christian Lord’s lack of interest in matters of the flesh.” Paul’s condemnation of homosexuality is said to be really a critique of the worst kind of wickedness: self-delusion, violence, promiscuity, and debauchery. Quoting the scholar Neil Elliott in his book The Arrogance of Nations, Miller declares that “Paul is not talking about what we call homosexuality at all.” Rather, supposedly, Paul is referring to the depravity of the Roman emperors, the craven habits of Nero and Caligula, not at all to anything like gay love or gay marriage. “He is speaking of really, really violent people who meet their end and are judged by God.” So Miller argues, “Religious objections to gay marriage are rooted not in the Bible at all, then, but in custom and tradition…a personal discomfort with gay sex that transcends theological argument.”

Miller writes: “A mature view of scriptural authority requires us, as we have in the past, to move beyond literalism. The Bible was written for a world so unlike our own, it’s impossible to apply its rules, at face value, to ours…. Most of us no longer heed Leviticus on haircuts or blood sacrifices. Why would we still accept its stance on homosexuality?…We cannot look to the Bible as a marriage manual, but we can read it for universal truths as we struggle toward a more just future.”

What is this more “just future”? Acceptance for all. Don’t leave anyone out of the sacred tent. Reach out to everyone, especially those on the margins. Misusing Scripture, she quotes Paul: “There is neither Greek nor Jew, slave nor free, male or female, for you are all one in Jesus Christ.” The argument then is that the Bible is “bent toward inclusiveness.” “The practice of inclusion, even in defiance of social convention, the reaching out to outcasts, the emphasis on togetherness and community over and against chaos, depravity, indifference—all these biblical values argue for gay marriage…. Jesus does not want people to be lonely and sad.” This is the case made by the world and the liberal church. It is a religious case, the religion of humanism.

A Christian religious case made regarding the matter of gay marriage is totally different. It is a scriptural case. The Bible is not the words of men, tied to a particular culture and age, but it is the living and abiding Word of God. The child of God by faith bows to the authoritative, infallible Word of God in all humility and obedience. He that created mankind said, “It is not good that man should be alone, I will make a helpmeet for him.” Showing Adam the animal kingdom and the pairing of the animals, God brought to Adam a woman, Eve, from his own flesh. This was the first marriage, a marriage made not by humans, but by God the Creator. And it was good. “Therefore shall a man leave his father and mother, and shall cleave to his wife, and they two shall be one flesh.” This is the marriage that is pleasing to God. This is the marriage that the Lord Jesus Christ highly honored with His presence in Cana of Galilee. This is the marriage in which a man and woman, avoiding all uncleanness and evil lusts, may live with a good and quiet conscience.

Sexual alliances outside of this marriage of one man and one woman are nothing but fornication and adultery that defile, a defilement that Romans 1 says is “uncleanness through the lusts of their own hearts, to dishonor their own bodies between themselves.” It is evidence of the wrath of God, who gives up such people unto vile affections: for “even their women did change the natural use into that which is against nature: and likewise also the men, leaving the natural use of the woman, burned in their lust one toward another: men with men working that which is unseemly (shameful), and receiving in themselves that recompense of their error which was meet…. God gave them over to a reprobate mind to do those things which are not convenient (fitting)” (Rom. 1:26-28). Such perversity is the judgment of God, and it incurs His wrath. As God destroyed the Sodomites of old with the destruction of Sodom and Gomorrah, so He will also in His wrath destroy today’s Sodomites and their culture.

We and our children live in this godless age. Our leaders, educational systems, and places of employment seek to bring acceptance, tolerance, and approval to this depravity in the name of political correctness. Where do we stand? What do we teach our children and their children regarding this issue? The religious case, based solely on God’s unchanging Word, is that gay marriage is detestable, gross immorality, perversion, and debased lust! And what is its end? “Know ye not that the unrighteous shall not inherit the kingdom of God? Be not deceived: neither fornicators, nor idolaters, nor adulterers, nor effeminate, nor abusers of themselves with mankind, nor thieves, nor covetous, nor drunkards, nor revilers, nor extortioners, shall inherit the kingdom of God” (I Cor. 6:9, 10). The religious case is that all of us need to know our sin, hate and flee from it, be washed and sanctified in the blood of Jesus Christ. That is the religious case that we need to make to those who are deluded and enslaved in their sin. It is all-inclusive. This is the only way to be accepted by God. This is the way to a life of joy and happiness. 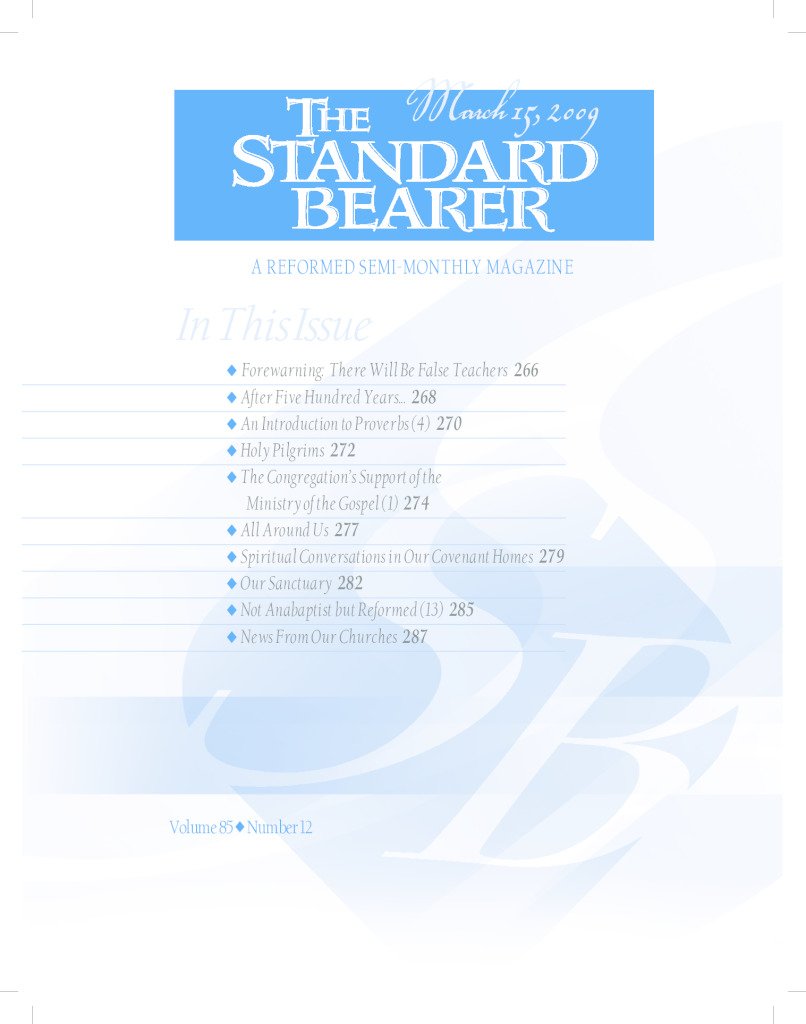