The Reformed Worldview: Truth and Its Consequences (7) The History of the Concept Worldview

The Reformed Worldview: Truth and Its Consequences (7) The History of the Concept Worldview

While considering the New Testament per­spective of the Christian life, we have seen that this new life that is ours in Christ Jesus is the foundation for a life of thankfulness to God. That underlies our entire perspective as Christians in relation­ship to this world.

The New Testament, therefore, reveals our Christian life in this world not as a matter of fulfilling laws, let alone accomplishing great things on God’s behalf or bringing the world into subjection to Him, but as a vibrant expres­sion of our Christianity, our life in Christ. It is the life of Christ that comes to expression in us also when it comes to the Reformed worldview.

That means, for one thing, that we know Christ as He reveals Himself in Holy Scripture (John 17:3). It is impossible to have a Reformed worldview, a biblically-grounded worldview, if we do not know Christ in truth.

That also means that the Reformed worldview recog­nizes with gratitude the exalted Christ’s Lordship. “But this man, after he had offered one sacrifice for sins for ever, sat down on the right hand of God; From hence­forth expecting till his enemies be made his footstool” (Heb. 10:12-13).

Philippians 2:9-11 expresses it this way: “Wherefore God also hath highly exalted him, and given him a name which is above every name: That at the name of Jesus every knee should bow, of things in heaven, and things in earth, and things under the earth; And that every tongue should confess that Jesus Christ is Lord, to the glory of God the Father.”

Our worldview is governed by the fact that Christ is Lord over us in every aspect of life. As Reformed believ­ers we confess in the first Lord’s Day of our Heidelberg Catechism that even our bodies belong to our Lord and Savior. He has a power over us, even a right to our bodies and souls, that no one else has. He owns us! He owns us whom He has redeemed with His precious blood.

Moreover, all power has been given Him for the sake of His church. To Christ alone belongs all dominion. That is why Scripture refers to Him as Lord of lords and King of kings. He rules over all the world.

The manner in which He rules over all things must be carefully distinguished according to Scripture. Christ rules over His church in His grace and by His Word and Spirit. By that grace Christ writes His law in the inmost hearts of His people, so that it becomes their delight to do His will.

But He rules also over the whole world by the power of His might, accomplishing His purpose in all things. As we are told in Ephesians 1:22, all things are subjected under His feet, for the sake of the church.

There are some astounding examples of this in Scrip­ture.

One of those examples is Pharaoh, of whom God said, “Even for this same purpose have I raised thee up, that I might show my power in thee, and that my name might be declared through all the earth” (Rom. 9:17).

Another example of God ruling the world by the pow­er of His providential government is found in His raising up Cyrus, king of Persia, for the explicit purpose of issu­ing the decree for the children of Israel to return to the promised land from their Babylonian captivity. We read in Ezra 1:1, “Now in the first year of Cyrus king of Per­sia, that the word of the Lord by the mouth of Jeremiah might be fulfilled, the Lord stirred up the spirit of Cyrus king of Persia, that he made a proclamation throughout all his kingdom….” That proclamation was the decree that the children of Israel return to the promised land to rebuild the house of God. What is even more amazing is the fact that Scripture tells us that Cyrus issued that de­cree without knowing Jehovah, that is, without knowing Him with the knowledge of true faith. History confirms that this action of Cyrus was done out of political expedi­ency.

These are but two examples confirming the truth of Proverbs 21:1: “The king’s heart is in the hand of the Lord, as the rivers of water: he turneth it whither­soever he will.”

So God rules over all things by His exalted Son, our Lord Jesus Christ. Everything, therefore, must focus upon Jesus Christ. Everything in our lives as Chris­tians must flow from gratitude for the riches that are ours in Him. Our entire walk, our direc­tion in life, all the decisions we make as we stand before the various choices in life, are to be made according to the dictates and will of Him who is higher than we.

There are profound implications with this truth.

For one thing, our worldview is governed by the truth that Christ is Lord alone. We do not look to derive ben­efits from all different religions and to apply them to our daily lives. True Christianity is not one religion among many. We do not recognize the legitimacy of Buddhism or Hinduism or Islam or Judaism as religions on equal footings with Christianity. We refuse to give legitimacy even to those sects that call themselves Christian, but that deny the unique lordship of Jesus Christ, the only true God. Christ alone is Lord!

This confession came to expression in the early New Testament church.

Satan himself, recognizing the significance of this confession of Christ’s exclusive lordship, intensified his attacks upon the church in the attempt to destroy that confession. Many Christians in the early church were placed before the choice of saying, “Jesus is Lord; but Cae­sar also is Lord,” or being executed. Satan does not want an exclusive Christianity. A worldview with that foun­dational principle he would fight against! He strives to bring about a false Christianity, one not only destructive to a Reformed worldview, but one that is anti-Christ.

By faith they walked the way of death, rather than deny the unique and only lordship, which belongs to Jesus Christ, the only begotten Son of God.

Talk about a worldview with conviction!

Another implication of this truth of Christ’s lordship is that, when we call Jesus Christ our Lord, we are not talking about Him being a lord for one day of the week, or part of that one day.

The Reformed worldview insists that the lordship of Christ presses upon every aspect of our lives, bringing us into willing subjection to the Lord of glory. He who owns us also lives in us! He rules over us—not by force, but by the impelling power of His love. His is a rule of grace in us who belong to Him.

For that reason His lordship embraces us in our mar­riages and in our families, at home and in the workplace, at church and in the schools, with all our life and all our possessions.

When we live in the consciousness of Christ’s lordship, it is our earnest desire and endeavor to obey His precepts and to seek out His will in every aspect of our lives. 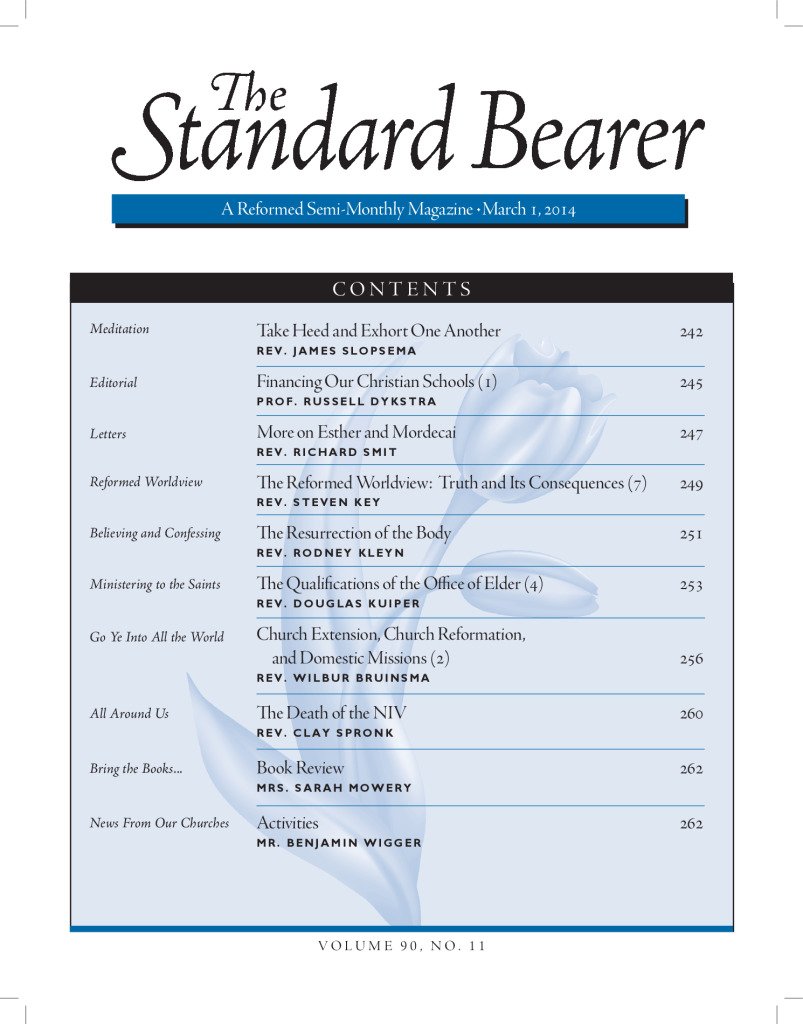