The argument goes like this. In the body of the Canons, the Reformed fathers erred in their teaching of reprobation, especially in I, 6 and I, 15. There, they taught an eternal decree consigning men to hell, which decree God carries out by withholding faith and by hardening. But in the “Conclusion” the fathers saw the light and did a complete about-face. Election and reprobation are now completely different; reprobation is quite unlike election. Reprobation is not eternal, not sovereign, not efficacious, not even a decree. By the phrase, “not . . . in the same manner,” the fathers of Dordt meant to say that reprobation is not God’s eternal ordination of some men to perdition, as election is the ordination of some to life.

It is odd, to say the very least, that the Canons, logical to a fault, to hear the foes of reprobation speak, so soon and so fatally forgot their logic, that at the end they contradicted everything they had just taught.

It is also passing strange that for more than 400 years the Arminians and Roman Catholics never noticed this chink in Dordt’s armor.

To tell the truth, it is to be wondered whether the learned critics of everything Reformed now appearing among us do not take us for a pack of ninnies.

The Canons did not commit such a blunder; “not . . . in the same manner” is not intended to deny that election and reprobation are the same in that both are decrees; both are eternal; both are sovereign and unconditional; and both are decisive for men’s everlasting destinies.

The explanation of the Canons’ statement is, first, that the sole blame for unbelief is the sinner’s, not at all God’s. Whereas all the praise for faith is God’s, all the guilt of unbelief is the sinner’s. The sinner fell in Adam; the sinner is conceived and born with a totally depraved, unbelieving nature—for which he is fully responsible; the sinner wickedly refuses to obey the call of the gospel. The doctrine of reprobation in no way whatsoever minimizes the responsibility and guilt of the unbeliever, much less transfers it to God.

Secondly, reprobation is not the cause of unbelief in the sense that God infuses unbelief into good men. In this manner, election is the fountain and cause of faith: God efficaciously works faith and good works into unbelieving and bad men. But in the case of the reprobate, God withholds the gift of faith and piety from wicked men and instead hardens them in their own unbelief. God does this, i.e., withholds faith, according to the determinative decree of reprobation. In this sense, reprobation is the cause of unbelief, as Jesus Himself expressly stated in John 10:26: “But ye believe not, because ye are not of my sheep. . . .” He does not say that their not being of His sheep is caused by their not believing; but he says that their not believing is caused by their not being of His sheep, i.e., their being reprobate. God eternally decreed concerning them that He would not give them faith and conversion; according to this decree, He withholds faith from them in time.

“The Well-Meant Offer of the Gospel”

The second more recent argument is the most serious of all the attacks on reprobation within the Reformed Churches today. It is the most powerful argumentwith the people in Reformed Churches. For heresy to make headway, there must be a certain receptivity on the part of the people. It is greatly to be feared that the attack on reprobation will be victorious on a large scale, because of the appeal that this argument has for the people.

I refer to the argument against reprobation that appeals to God’s universal love and grace; God’s sincere desire that all men be saved; and God’s well-meant efforts in the preaching to accomplish this universal salvation. It is widely assumed that God loves and desires to save all men. The popular mind holds that this is the very foundation of missions. If the notion is questioned, John 3:16 is immediately quoted as proof: “God so loved the world. . . .”

But by the offer is meant the teaching that God loves all men with a love expressed by the gospel of Christ; that God sincerely desires to save all men by the gospel-call; that God’s grace in Christ is universalï¿½for all men.

This is a powerful argument against reprobation, in the end an invincible argument. If God is gracious to all and desires to save all, He couldnot have ordained some to perdition. The offer flatly contradicts reprobation, and it does so in a way that is unmistakably clear to the people.

By this time, the irresistible power of the argument from the well-meant offer to overthrow the Reformed doctrine of double predestination is evident in the life of Reformed Churches. In 1965, Dr. M. J. Arntzen wrote a little book entitled De Crisis in de Gereformeerde Kerken (The Crisis in the Reformed Churches of the Netherlands). The crisis is that these churches “have come dangerously close to the abyss.” Three prevalent errors in the churches are responsible for this crisis: the denial of the authority of Holy Scripture; the denial of the authority of the confessions; and the denial of double predestination in the form of the denial of reprobation.

Arntzen, then a member of these churches, gives a staunch defense of double predestination. Having completed this defense, he is immediately confronted by the argument of the well-meant offer of grace (“Het welmenend aanbod der genade“). “One of the most important arguments which one thinks he can lodge against the classic doctrine of election is the following: If God has determined from eternity that not all are saved, then the preaching of the gospel is made powerless; it is a threat to the seriousness of preaching. For how can one then maintain that God seriously offers grace to all?” (my translation of the Dutchï¿½D.E.)

Misled by A.C. De Jong’s presentation of Hoeksema’s rejection of the offer and not seeing the essential difference between the well-meant offer and the “serious call” of the Canons in III, IV, 8, Arntzen cannot refute the argument of the offer against reprobation. The most that he can do is to warn against overemphasizing the offer (“the disproportionately strong emphasis on the general offer of grace must inevitably lead to a preaching of universal atonement”) and to point out the grave error of those opposing reprobation by means of the well-meant offer (they make themselves guilty of the teaching of “an equally powerful call to all, and of resistible grace, and a regeneration that can again be ‘annulled'”).

This is something, but it is not enough. For the argument of the well-meant offer against double predestination remains in the field, a bit bloodied and somewhat battered, but undaunted for all that. Unconquered and undestroyed, it will conquer and destroy. With its victory over predestination, the Reformed Churches of the Netherlands will plunge over the precipice of the bank of which they are poised. 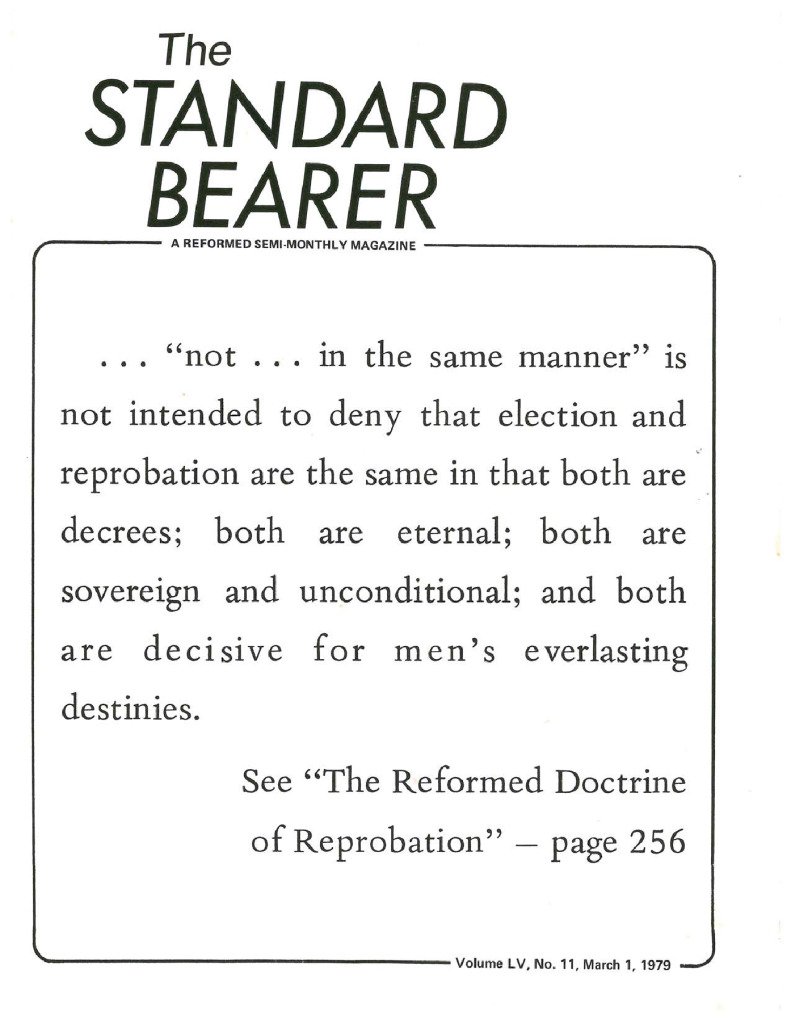