Modern liberal religion is a philosophy of ethics and morality. In fact, liberal interpretation makes ethics and morals of central importance in the shade of which stands religion, faith and practice. The biblical and theological religion of redemption is reduced to a social ethic, with Jesus Christ the paragon of ethicists. Not the saving power of God, but the spiritual competence of man is the important element in the modern gospel. It propagates a social gospel which concerns itself with the ethical problems of the present life. God and the world to come are matters of personal opinion. Man’s chief end is to increase in the knowledge of love and the practice of right.

This modern thought is a form of pantheism, the idea that all men are divine, and God is present in and identified with the whole world. Pantheism, because it is a naturalistic philosophy, secularizes all of life, even secularizes God, so that it is a kind of religious atheism. Then since God is everything and everything is God, there is no such thing as morality or sin. The present craze for liquor, lust and LSD, given a religious facade, is claimed to be man’s new quest for God; sin is a groping for God. The voice of atheism and man’s natural urges are the voice of God in the soul. Drunkenness, sexual promiscuity and “trips” on exotic drugs are expressions of man’s right of self-indulgence in search for the more abundant life. Hippyism is a brave effort to expand the soul, blaze a trail through unexplored regions, and attain exciting new experiences. The sloppy attire, the unkempt appearance and the attendant life of debauchery are a quest for life, a quest for God. Where there is, all too often, deviation from pure “flower power” to ugliness, dinginess, horror and murder, trampling on the good, the true and the beautiful, man’s reeking, bloody footsteps only mark a blundering trend toward God. If Paul were here he would say that such questing for “God” is no more than a sacrificing to demons. And if Isaiah were here he would call it a making a covenant with death.

Since modern thought denies the infallible, verbal, plenary inspiration of Holy Scripture, there is for liberalism no absolute standard of truth, neither in doctrine nor in life. The Bible and the system of truth derived there from, and all concepts of morality, are but the result of man’s thinking. There is therefore no objective rule for right and wrong. Back in 1915, Dr. James H. Tufts, head of the department of philosophy in the University of Chicago, said, “The newer ethics is itself yet uncertain . . . It does not know exactly what justice is.” (The Biblical World, p. 13) Neither did Plato, as his Republic reveals. Nor does modern man, from the Hippies to the religious liberals. ‘There is none that understandeth, they are all gone out of the way.”

Moral principles, it is claimed, are not developed from divine revelation, but are mere products of evolution, and so are in continual flux. Part of the evolutionary development of man’s morality is his abrogation or changing of existing rules of ethics. The law of God is a product of the human mind, and so may be broken or ignored. The result is a trend back to savagery. Where religious liberalism used to advocate Jesus as a leading moral exemplar, now it advocates, “Indulge your instincts.” The “truth” is only a pragmatic slogging along in the rut of contemporary expediencies, is but a do-it-yourself manufacture as one stumbles along. The worst kind of so called realism invades the magazines, paperbacks, novels, high school and college required reading, lecture halls, movies, theater and TV. So that three great evils prevail, fraud, immorality and violence. Back in 1920, Philadelphia’s Rabbi Krauskopf said, “Many who are pleasure mad and indulge in the social depravities of today know that their excesses and indecencies and immoralities are iniquitous, but they have no longer the will power to withstand them.” (Modern Religious Liberalism, Horsch, 121) In this same period, the famous Dr. Howard A. Kelly expressed concern over man’s “moral bankruptcy . . . the minimizing the value of human life, the pleasure mad habits of our people, and the ever increasing amount of dishonesty . . . the inevitable . . . immorality of the sexes and its consequent train of diseases. . . Thank God these terrible diseases are not quite so universal in America as on the continent of Europe, but they are bad enough.” (ibid.) But today, where the USA is only a few years behind aping Europe in certain evils, it takes the lead in making other evils the fashion. New York’s Rabbi Wise said fifty-four years ago, “Nearly all men and women were shocked when the wretched modern dances were perpetuated for the first time.” Dr. John Haynes Holmes, a leading liberal minister in 1920 said, “Dancing today, even among our so called ‘best people,’ is indecent . . . We noticed all kinds of dances and postures which, . . . in the New York slum districts . . . chaperons . . . forbid as immoral. Nowhere in our social life today is there such evidences of degeneracy as” (with) “the dance. . . The music is barbaric, the dressing immodest and the dances brutally sexual.” What he also said then of the Broadway stage could also just as warrantably be said of today’s television. It “is crowded with women who are actresses only in the sense that they are willing to expose their nakedness to the public gaze, and with men whose only qualifications are the ability to tell a dirty joke in a dirty way.” The following is also from 1920. Would it more pointedly apply to the theater, the movie or television? “Marital infidelity has always been a ‘legitimate’ dramatic motive, but formerly it was suggested, not shown. Today it is given to us in full detail, and our authors and producers have come to look upon seduction and rape as perfectly legitimate material for frank depiction before miscellaneous audiences.” The world swills all this in the name of art.

Religious liberalism used to say that there is no religion but morality. Then religion was displaced with humanistic ethics, and now both are substituted for a “new” morality. Another liberal religious writer complained that “the authority of the message is gone; we are left without any authority, religion is adrift and optimism is pure speculation. We are hastening through our modern liberalism into conditions of religious dissolution.” Another liberal professor adjudged that “we are fast drifting into a cultured paganism.—In fifty years crime has increased four hundred percent. Something must be done to underpin the virtues of our people.” Now, forty-eight years later, ours is not a Christian nation, but one of “cultured paganism,” (al though paganism, not heathenism, was always cultured) with crime still increasing, and modern liberalism pouring oil on the fires by encouraging civil disobedience.

In that same 1920 an eyewitness of Socialism in Australia related how the advantages of legislation for the benefit of women and children were realized, the long-sought eight-hour day installed, the labor party in power, and everything then expected to be happy and beautiful in a socialist state. But “in the streets of Sydney I saw more drunken men and women than I ever saw in Chicago, and the whole community was getting the . . . something-for-nothing attitude. Why, you could see whole groups stand in line on Saturday afternoon waiting to bet a portion of their week’s wages in government protected lotteries. A greater illegitimate birth rate prevails there than in any other nation of which we have record, and a lower general birth rate in the cities than of any nation of which we have record. Why? Material prosperity. Seven million people fringed around an area as large as the United States.”

Maxim Gorki, one of the world’s leading Communists, revolutionary protagonist, donor of Gorki Awards to best Communist revolutionary authors in the U.S., wrote, “What alarms me most is the fact that the social revolution does not bring with it any sign of spiritual regeneration among men. It does not seem to be making men more honest. It is not lifting their self-esteem nor the moral value of their labor . . . one does not notice among the masses that the revolution has lifted or quickened their social conscience. Human life is appraised just as cheaply as it was before. The habits of the old regime are not disappearing. The new authorities are just as brutal as the old ones were and, in the bargain, their manners are worse. The new officials permit themselves to be bribed just as easily, and they send men to prison in herds as the old did, Physical force has merely been transferred. But this does not in any way help the growth of new spiritual forces among us. The rectification of wrong can only come through the development of our spiritual forces.” (ital., RCH) Advocates of the American social gospel have long claimed it impossible to be a Christian in a nonsocialized commonwealth. But the Communist Gorki has testified that Socialism and Communism produce the exact opposite of anything Christian.

“T. Robert Ingram writes in The World under God’s Law (39): There is the recent expose in Congress of the list of reading material approved by the National Council of Churches, which included books so obscene that the offending material was not even read aloud in the House of Representatives. What ever may have been the explanation, it is an unshakable fact that the National Council of Churches gave religious sanction to the distribution of lascivious literature.” (Baal or God, 334)

The New Morality is not really new. It can be traced back to the line of Cain. For “the thing that hath been, it is that which shall be; and that which is done is that which shall be done: and there is no new thing under the sun. Is there any thing whereof it may be said, ‘See! This is new!?’ it hath been already of old time, which was before us.” (Eccles. 1:9, 10) Not new, but certainly much more advanced in the complexities of evil since its beginning, even of the beginning of its American form at the turn of the century. For proof, read in Herman J. Otten’s Baal or God the chapter on The Law of God. 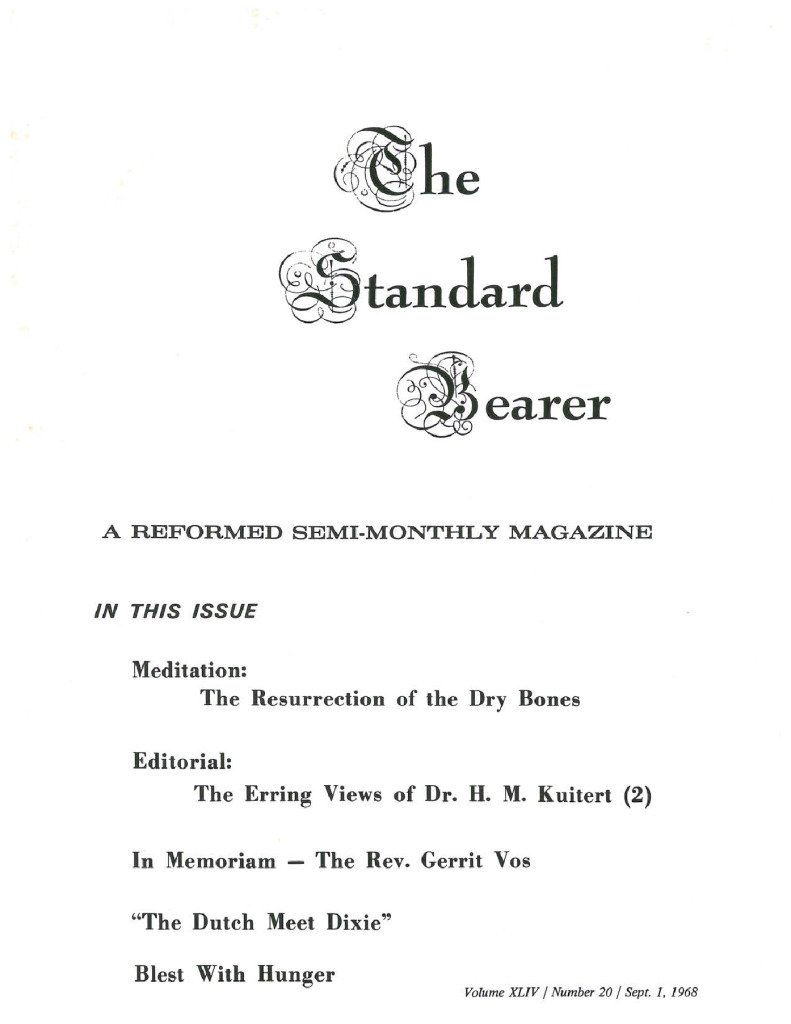