The Reading and Preaching of the Scriptures in the Worship of the Christian Church, Volume 7: Our Own Time, author Hughes Oliphant Old.

The Reading and Preaching of the Scriptures in the Worship of the Christian Church, Volume 7: Our Own Time, author Hughes Oliphant Old.

“A work of supererogation”—that is how one minister describes reading all seven volumes of Hughes Oliphant Old’s The Reading and Preaching of the Scriptures in the Worship of the Christian Church(1998-2010). I couldn’t disagree more!

Having read every page of all seven volumes and having eagerly waited for them to come off the press, I can say that I have found Old’s history of preaching to be a delight, not a drudgery, never mind above the call of duty. It is not an exaggeration to say that Old’s magisterial multi-volume work is far and away the best in its area. The author’s grasp of and love for his subject, his comprehensive sweep of preaching in various countries and “schools,” his lively prose and his personal knowledge of some of the ministers all make for fascinating reading.

The same engaging style and verve displayed throughout Old’s monumental series characterizes his seventh and final volume entitled Our Own Time. Seven of the twelve chapters deal with preaching in the United States: “mainline” liberals (ch. 1), Arminian Billy Graham (ch. 2), Presbyterians (ch. 3), Roman Catholics (ch. 6), “Black Preaching” (ch. 8), Charismatics (ch. 9), and mega church preachers (ch. 11). Old’s global interest comes out in his treatment of Protestant preaching in sub-Saharan Africa (ch. 4); Roman Catholic Liberation preaching in Latin America (ch. 5); Eastern Orthodox preaching in Romania in connection with its 1989 revolution (ch. 7); as well as preaching in the British Isles (ch. 10) and East Asia (ch. 12). Thus Old manages to include South America (and Central America), Africa, Europe (the British Isles and Romania) and Asia, as well as North America. Only the continent of Australia goes untreated. As well as requiring reading a lot of sermons and a judicious selection and arrangement of his material, all this calls for a ‘feel’ for various countries and the history of their churches, preaching, and preachers on five of the world’s six continents (not including Antarctica). No mean task!

So who, besides Billy Graham mentioned earlier, are some of the better known preachers included in Old’s seventh volume? Sinclair B. Ferguson, a Scottish Presbyterian in S. Carolina; Archbishop Peter Akinola of Nigeria, a leader of the Southern Anglicans against the liberal, pro-homosexual, white Anglicans of the Western world; Martin Luther King, Jr., the African-American civil rights leader; Oral Roberts, the charismatic televangelist; evangelical John Stott of the Church of England; California mega church pastor, author, and radio preacher Chuck Swindoll; and “Watchman Nee,” author of allegorical devotional works.

In late 2007, I e-mailed Hughes Oliphant Old to see if he would be interested in treating Herman Hoeksema in volume 7. After mentioning that he had “heard of Hoeksema” and stating that “a few years ago I would have been pleased to have received his sermons,” Mr. Old very graciously declined my offer to send him Hoeksema’s Righteous By Faith Alone and Behold He Cometh! in light of his failing eyesight and his approaching publisher’s deadline. One wonders how Hoeksema would have looked among the extremely variegated preachers in Old’s final volume, many of whom are heretical!

Sadly, in keeping with the rampant apostasy in the church world of our day, volume 7, aptly entitled Our Own Time, covers what can only be described, in the light of the Reformed confessions, as various false gospels and false gospellers in false churches (Belgic Confession 29; Westminster Confession 25:4-6). As well as Eastern Orthodoxy, Romanism, and Liberation theology, we receive an unhealthy dose of liberal Protestantism, defending sodomy and the murder of unborn babies, and pleading for the “social gospel” of big (civil) government, the nanny state. Riddled as they are with higher criticism of God’s Word, often enslaved to existentialism and trained in liberal seminaries, it is no wonder that the “mainline” preachers degenerated into parroting left-wing “causes.” Left-wing ideology is also preached by some of the black American ministers and the East Asians that Old mentions. Old also throws into the mix Arminians, a woman preacher, and the folly of the Charismatics, with their “healings.”

Old has an appropriately-titled section on “Sister” Aimee Semple McPherson: “Preaching as Entertainment.” In keeping with her scandals (her mysterious disappearance in 1926 and her disastrous third marriage while her husband was living) and bizarre services of healing and receiving the Holy Spirit are her flamboyant preaching techniques and aids. Her sermons were “enlivened” with fire alarms, fog horns, police sirens, skits, bands, and the dramatic use of lighting. In one sermon, a camel from a local zoo was brought into her Los Angeles church. On occasion, Sister Aimee made her pulpit entrance on a white motorcycle. “As Charlie Chaplin is supposed to have said, she was a superb actress, as good as any Hollywood ever produced” (p. 403)!

The most chilling part of Old’s seventh volume comes in his discussion of John MacArthur’s sermons on Christ’s exorcising demons:

I really do not believe in Satan, demonic spirits, and demon possession. Maybe I ought to, but I don’t. I am willing to agree that I may have been too strongly influenced by the intellectual world in which I was brought up to fully grasp the full teaching of Scripture, but that is the way it is (p. 556).

How awful! Also deeply disturbing is Old’s related statement: “I have to admit that the caveats of the Enlightenment still obscure my thoughts from time to time. I suppose I am troubled by a shadow of doubt, but then the same would be true of many in my congregation” (p. 556). So this is in his church too!

This is the huge flaw in Old’s thinking: unbelief in the inerrant, holy Scriptures, which goes hand in hand with the dark doubts of the “Enlightenment.” Think it through: If there is no Satan, then what of the Fall inGenesis 3 and the many references to him and his fallen angels throughout the Bible? And what of our Savior’s temptation in the wilderness and the cross as His victory over Satan? If the Lord Jesus wrongly reckoned that He was tempted by the devil those forty days, that He drove out demons, and that He defeated Satan by His death, can He really be the incarnate Son of God?

One can appreciate much in Old’s learned and persuasive series. He wants to recover expository preaching. He wants the historic church’s theology taught from the pulpit. He wants preaching to be viewed as worship and done to the glory of God. All true and well said. But there is a huge “But!” The only thing that can truly support all this is God-breathed Scripture, so that “all” of it is “profitable for doctrine” (II Tim. 3:16) to equip the man of God (II Tim. 3:17), who is solemnly charged to “preach the word” (II Tim. 4:2).

Along with Old’s rejection of Scripture’s infallibility (John 10:35) and acceptance of higher criticism comes his false charity towards the various false gospels and false churches. There is a logic to all this. Not accepting the Bible’s teaching on the devil (“I really do not believe in Satan”), how can Old believe its testimony that the evil one sends forth false teachers (II Cor. 11:13-14) who preach “another gospel” of “another Jesus” through “another spirit” (II Cor. 11:3-4) and so establish and maintain “synagogues of Satan” (Rev. 2:9, 3:9)?

Not Old, but the Reformed creeds and the Reformed tradition point the way to the faithful reading and preaching of the Scriptures as worship in true Christian churches in our own time and until the Lord Jesus returns. For Old (learned and eloquent as he is) and his magisterial series (with its fascinating description of the preaching of both true and false churches) can take us only so far. 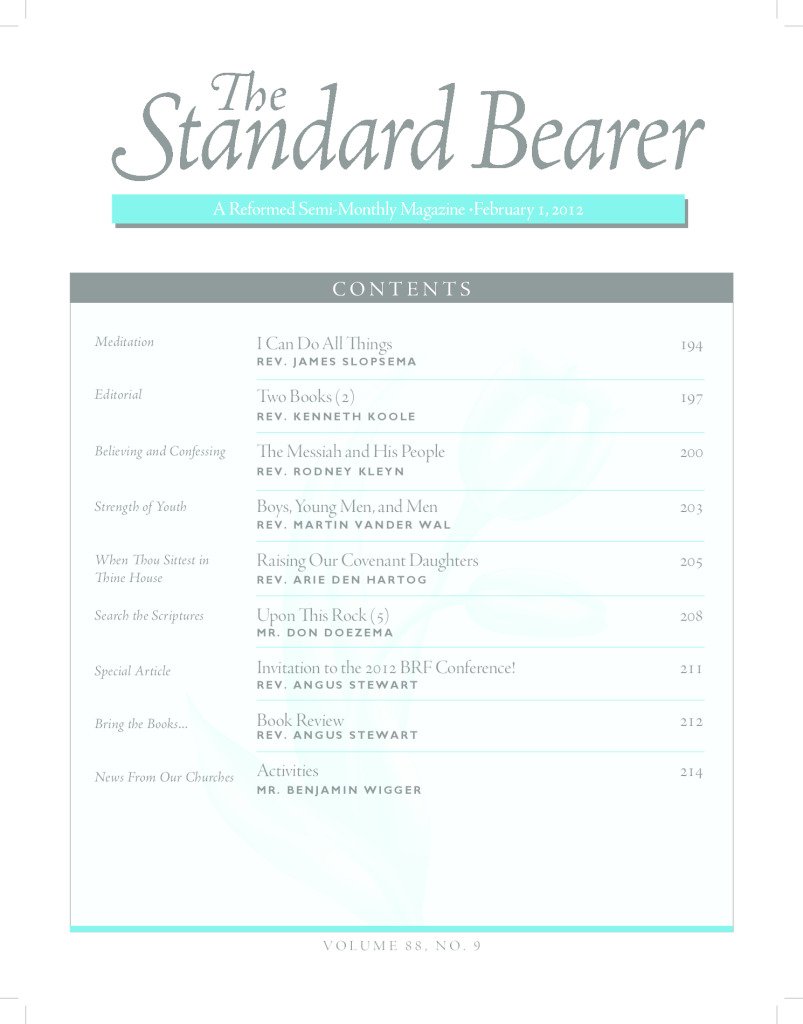