The history recorded in John 11 is about Jesus’ raising from the dead one Lazarus.

We do not know much of Lazarus. He was of the town of Bethany, nigh unto Jerusalem, about fifteen furlongs (two miles) off (11:18). His sisters were the devout and devoted Mary and Martha.

The most significant fact of Lazarus is that he was loved of Jesus. Pointed reference is made to this fact in the narrative. In verse three we are told that the sisters sent unto Jesus saying, “Lord, behold, he whom thou lovest is sick.” Verse five tells us: “Now Jesus loved Martha, and her sister, and Lazarus.” When Jesus wept (v.35), the Jews exclaimed, “Behold how he loved him!” (v. 36).

In response to the love of Jesus, Lazarus loved Jesus. He whom Jesus loves will always be constrained, willingly, to love back (cf. 2 Cor. 5:14)! This love of Lazarus for Jesus is not evident, of course, in John 11. But in John 12 we read of Lazarus and his sisters showing hospitality to Jesus in their house. Lazarus is sitting at the table with Jesus (12:2). There is no doubt in my mind that Lazarus’ main course at this meal was Jesus’ words!

Lazarus also became a preacher. He is a strange preacher! He is one of the only, if not the only, “silent preacher” in the Bible—we never read of him ever having said a word. But we note that in chapter 12, verses 10 and 11, the chief priests counseled to put Lazarus to death because that “by reason of him many of the Jews went away, and believed on Jesus” (v. 11). His being alive was a sermon! No need for him to talk, just live! Just live after you have died, and you are a sermon! But there is no doubt that, if he had a mouth to speak, Lazarus declared Jesus, “the resurrection and the life”!

The narrative of John 11 is about the sickness, death, and resurrection of Lazarus from the dead. We learn also something of the personalities and faith of Mary and Martha. Then, too, there is the nefarious plotting of the Jews who, at this miracle of Jesus, rather panic, thinking that if Jesus is allowed to continue to do such miracles “all men will believe on him, and the Romans shall come and take away both our place and nation” (vv. 47, 48).

The focus of the passage is, however, not on Lazarus, nor on Mary, nor Martha, nor the wicked Pharisees. Nor is it even on the miracle of the raising of Lazarus. Rather, it is on Jesus Himself. The express purpose of the sickness and miraculous raising of Lazarus was, after all, “for the glory of God, that the Son of God might be glorified thereby” (11:4). The Lord, at this time, declares His Messianic identity as “the resurrection and the life.” Martha declares her faith that Jesus is “the Christ, the Son of God, that should come into the world” (v. 27). And even the wicked high priest Caiaphas, though wresting the scriptures to his own destruction, and though hardly aware of what he was saying, prophesies of the necessity of the atoning death of Jesus—for the Jews and Gentiles (11:49-52)!

One result of this extremely significant miracle of our Lord was that many Jews believed on Jesus (v. 45). Indeed, in a certain sense, the result of this miracle was that the world went after Jesus (12:19)!

Another result of the gospel of the resurrection of Lazarus was that others plotted, now officially, the death of Jesus (vv. 46-53).

And what, my friends, is the result of this miracle in you?

Believest thou this … this resurrecting Jesus? This the resurrection and the life?

Believest thou this … as thou dost search the Scriptures?

Lazarus was taken ill. It was a fatal illness. Jesus was sent for by Lazarus’ sisters, Mary and Martha. No doubt they hoped Jesus would come and heal Lazarus (proof for this is found in that both sisters recall Lazarus to Jesus as “the one Jesus loves”—Martha, in verse 21, and Mary in verse 32). Be able to explain the history: What took place after Jesus is sent for, and while Jesus delays (vv. 3-16); His conversations with Martha and Mary (vv. 17-32); the raising of Lazarus (vv. 33-44); and the events which occurred immediately after (vv. 45ff.).

Jesus’ statement in verse 4 gives the purpose of the sickness of Lazarus, and, by implication, of the miracle of Jesus’ resurrecting Lazarus: “It is not unto death, but for the glory of God, that the Son of God might be glorified thereby….”

The glory of God! God is glorious. His glory is His own holiness and majesty. It is that revealed. It is the scintillating quality of the divine perfection. It is God declaring Himself to be God in all the works of His hands (Ps. 19; Is. 6:3). It is God shining in His perfection in His Son incarnate, full of grace and truth (John 1:14, 18).

Now this sickness was said of Jesus to be “for” the glory of God—”for,” or “on behalf of,” the promotion of the glory of God. That is: it was so that God’s glory would be further revealed. 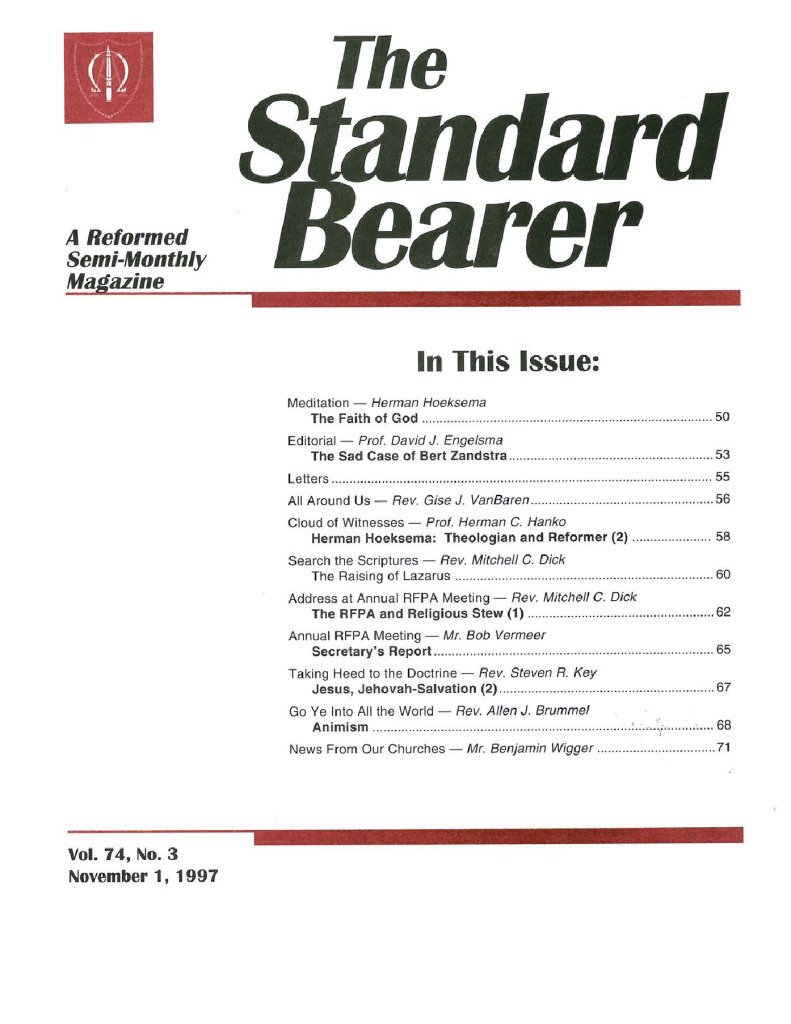