The Qualifications of the Office of Elder (5): Married, With Children? Not Necessarily

The Qualifications of the Office of Elder (5): Married, With Children? Not Necessarily

The fundamental qualification of the elder is that he be “blameless” (I Tim. 3:2, Titus 1:6). By giving further qualifications for the office, the inspired apostle indicates that the elder’s blamelessness must be manifest in his personal life, as well as in his relationship to his wife and children: “A bishop then must be…the husband of one wife,…having his children in subjection with all gravity” (I Tim. 3:2, 4).

These statements assume that the elder will have a wife and children. Before examining their positive significance, let us ask whether this means that a man who is not married, or who has no children, may not serve in the office of elder. Is the having of a wife and children in itself a qualification for the office?

Throughout history, at least three different answers have been given to the question whether a man must be married and have children in order to serve as elder. The answer of Reformed churches historically, and the position that I will defend, is that God is not prohibiting single men, or childless men, from serving in the office of elder.

Rome’s position is that an officebearer may not have a wife: “All the ordained ministers of the Latin Church, with the exception of permanent deacons, are normally chosen from among men of faith who live a celibate life and who intend to remain celibate ‘for the sake of the kingdom of heaven.’”1 A married man is disqualified from being a priest. A priest who marries jeopardizes his continued holding of his office.

This position we reject as being directly contrary to the Word of God. Putting aside for a moment the question whether a single man may serve in the office, every Christian should readily see that Scripture does not support the idea that a married man is, by virtue of being married, excluded from the office. In the Geneva Bible, this note is added to I Timothy 3:2: “Therefore he that shuts out married men from the office of bishops, only because they are married, is antichrist.” This pronouncement is fitting; without identifying the final culmination of Antichrist as some present or future pope, the ever present spirit of antichrist (I John 2:18; I John 4:3) manifests itself by adding to and taking from God’s Word as it pleases.

The second position is that God restricts the office of elder to men who are married with children. I have heard this position stated verbally before, but not seen it written—until I read the “Letter to the Editor” column in the March 2012 issue of the Beacon Lights. There Mr. Derek Vanden Akker commends the PRC for applying I Timothy 3 and Titus 1 faithfully in several respects, but then says:

But I do take issue with the random manner in which the PRC applies these criteria. If the Bible mandates that an elder have a wife and children, why do the Protestant Reformed Churches not prohibit, as the Bible commands them to, the ordination of bachelors, widowers, and men who are childless?…. No wife, no children, no ordination.2

In two ways, Mr. Vanden Akker’s comments are helpful in presenting the issue. First, he states the issue concisely. Second, he shows that the question is not merely whether the elder must be married; it is also whether he must be a father, and then a father of at least two children (note that I Timothy 3 and Titus 1 refer not to an officebearer’s child, but to his children, in the plural).

Let’s spell out the implications of this position. If this position is true, no single man, no childless man, and no man with less than two children, may even be considered for the office of pastor, elder, or deacon. Even though we are now speaking particularly to the office of elder, I refer to the offices of pastor and deacon deliberately: the pastor is an elder (I Tim. 5:17); and the same qualification is later listed of deacons (I Tim. 3:12).

Furthermore, if this position is true, then an officebearer must be removed from office if his wife dies, or if all but one of his children die, while he is serving in office. I do not believe I am stretching the issue when I draw out this implication. It happens that some men who were qualified for office in light of I Timothy 3 and Titus 1, and were elected to and installed into office, become disqualified while serving in office. Such may not continue in office; they must be put out of the office. If this is true with regard to a man’s spiritual qualifications, why would it not be true with regard to his family qualifications? If a man is in office, but is not the kind of man whom God would have serve in office, he must be put out.

The third, and correct, position is that the phrases “the husband of one wife” and “having his children in subjection with all gravity” do not require the officebearer to be a married father of two or more children, but rather teach that when an elder is married, and when he is a father, he must be a certain kind of husband and a certain kind of father. Not whether he is married and is a father, but what kind of relationship he has with his wife and children, is the issue.

This has been the position of the Christian church and Reformed churches throughout the ages. This position is not stated in official church orders and documents. But it is a position that has been established by historical precedent: churches have permitted single men, and men who are married but not fathers, to be in church office.

While not stated in official church documents, this position is stated by commentators on the texts in question. The Lutheran commentator R. C. H. Lenski says, commenting on I Timothy 3:2, “It is plain that Paul does not say that none but married men may enter the ministry, that every pastor must be married”3 (580). And the Christian Reformed preacher and expositor William Hendriksen says: “This cannot mean that an overseer or elder must be a married man.”4

The primary objection to this position, raised especially by those taking the second position stated above, is that this does not do justice to the wording of the verbally-inspired Scriptures, which require him to be a “husband” with “children.” Our answer to this objection is that the apostle so wrote because, in the history of the church, most men are married with children, and the apostle is saying what kind of married fathers they must then be. To quote Hendriksen again: “This cannot mean that an overseer or elder must be a married man. Rather, it is assumed that he is married—as was generally the case—…” (the italics are Hendriksen’s).

In support of this position, we give two biblically grounded reasons.

“Of One Woman the Man”

That this is the meaning is evident from two considerations about the words in Scripture. First, in the Greek original of both I Timothy 3 and Titus 1, the English phrase “the husband of one wife” reads “of one wife the husband.” The emphasis is not on “husband” or “wife,” but on “one.” Second, while the words translated “husband” and “wife” are often so translated in the New Testament, they are not exclusively translated “husband” and “wife”; their lexical meaning is broader. The word translated “wife” is the Greek word from which we get our word “gynecology”; it can refer to “a woman of any age, whether a virgin, or married, or a widow.”5 And the word translated “husband” can refer to any man, distinguished in gender from a woman, and distinguished in age from a boy. So we can literally translate the phrase in question this way: “of one woman the man.”

Together, these points indicate that the fundamental qualification here is that a man be sexually pure, and be faithful to his wife. This qualification says everything about the exemplary relationship that an elder must have with his wife.

The qualification applies even when the elder is single. If a single elder is pursuing marriage, and so has a special relationship with a woman, he must be devoted to his prospective wife. If single and not pursuing marriage, he may not be the kind of man who always has another woman on his arm—one this week, another the next. The elder, whether married or single, may not be a “ladies’ man.”

The mistake of those who restrict the office of elder to married men is, first, that they misunderstand the intent of this passage of God’s Word.

The second reason why an elder need not necessarily be married is that this position proceeds from the principle, “Scripture interprets Scripture.” I Timothy 3:2 and Titus 1:6 are not all that Scripture says on the matter. God Himself placed into special office in the church some men who were single. The apostle Paul is a prime example.

The very fact that God put such men in office indicates that God does not forbid single men to serve in the special offices in His church.

To this the response of some is that God’s doing this does not warrant man’s doing this; God’s past actions in this regard do not regulate the church’s conduct. To illustrate this, let me return again to a statement in Mr. VandenAkker’s letter. He says: “While it is true that the conscientious application of these verses would prohibit the ordination of Paul himself, as well as the other apostles, and even Jesus for that matter, it is not for us to question God’s will as laid out in the Scriptures. It is only for us to obey.”

But this is a wrong presentation of the matter. The insistence on unquestioning obedience is not wrong; the child of God must always be prepared to obey without questioning. But it is wrong to suggest that God’s appointment of Paul to hold special office in the church was contrary to God’s own revealed will to His church regarding what kind of men can serve. The very fact that God Himself called Paul as a single Christian to labor in His church is evidence that God does not forbid single men to hold office. Add this to the correct understanding of the phrase “the husband of one wife,” and one can see that God is not inconsistent here.

But, as I indicated at the beginning of the article, we have not yet touched on the positive meaning of the qualifications regarding the elder’s relationship to his wife and children. This, God willing, we will do next time.

3 R. C. H. Lenski, The Interpretation of St. Paul’s Epistles to the Colossians, to the Thessalonians, to Timothy, to Titus and to Philemon (Minneapolis, MN: Augsburg Publishing House, 1961), 580. 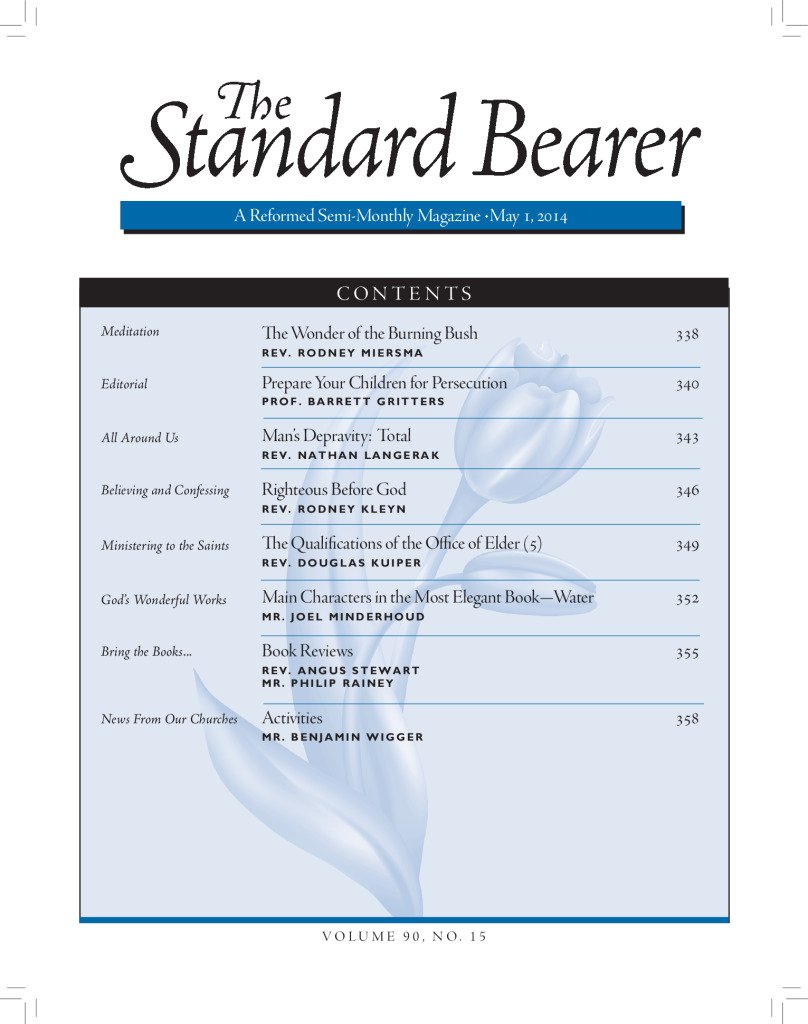