The Protevangel as the Unifying Idea of all the Scriptures

The Protevangel as the Unifying Idea of all the Scriptures

The Protevangel is the promise of the Gospel as first proclaimed and this by the very voice of Christ. Let us get this Gospel before us:

“And I will put enmity between thee and the woman, and between thy seed and her seed; he shall bruise thy head, and thou shalt bruise his heel.”

The importance of this promise must be perceived, it is verily the embryo, the seed, so to speak, of all the promises thereafter spoken through the centuries of the formation of the Canon of the Scriptures, which is to say that the latter are but the development, unfolding, of the Gospel contained in the former.

Students of Scripture rightly speak of a history of revelation. But what is this “history of revelation” but the history of the unfolding and development of the Gospel of the protevangel—an unfolding of this Gospel in and through the discourses of Israel’s divinely inspired prophets. There is therefore but one promise essentially. Yet the Bible speaks of promises. But this cannot mean that the “promises” hold forth a Gospel that differs from the Gospel of the Protevangel or that is not as to its substance contained in it. What is meant is simply that the salvation that the protevangel holds forth is that many sided and includes a variety of riches—riches of His grace—so wonderful that, if it was to be fully comprehended by God’s believing people more and always more light had to be shed upon it. And this light was not withheld. It was given in all the promises thereafter spoken.

Now in shedding this needed light, in unfolding the gospel of the protevangel, the Lord availed Himself of definite vehicles of thought.

Heidelberg catechism. The question reads: “From whence knowest thou this?” and the answer: “From the Holy Gospel, which God himself first revealed in paradise; and afterwards published by the patriarchs and prophets, and represented by the sacrifices and other ceremonies of the law; and lastly has fulfilled it by His only begotten Son.”

We must now concentrate on this history, this typical, prophetical history of the people of Israel. Examining this history we discover that it divides in a number of parts or epochs or dispensations of grace. We discover further that each part is complete by itself and that it constitutes in contradistinction to each of the other parts or epochs a complete type of the salvation held forth by the protevangel. We discover finally that in each succeeding picture type of the series, the features of this salvation stand out in always bolder relief. Herein each succeeding type differs from the one immediately preceding.

The first picture is that epoch of sacred history that begins with the fall of man into sin and that ends with Noah and his family leaving the ark after the deluge and his being blessed by the Lord God.

Let us get the events of this epoch before us.

The first man Adam left the hand of God his Maker a sinless man. For in His own image God created him. But Adam subjected himself to sin. He thereby corrupted his whole nature and became perverse in all His ways potentially as to himself and actually in his generations. Then God brought in His Gospel, “I will set enmity. . . .”

The protevangel itself does not supply the answers. Hence if there had not been any subsequent revelations of God, these questions would forever have remained unanswered. The Lord must shed light on His Gospel if it was to be understood. And this light was also shed through the centuries.

Immediately the two parties appeared and soon thereafter the seeds of each. There was Adam and Eve and Abel as opposed by Cain. And there was enmity between the two and they strove the one with the other, the seed of the serpent, who was Cain, and the righteous Abel, the seed of the woman. The strife culminated in the slaying of Abel by Cain. This was the first crushing of the heel of the woman by the serpent. But Abel was not destroyed; for, in the figurative language of the protevangel, only his heel was crushed and not his head. For he has fought the warfare of God by God’s mercy. Hence he will rise again in Christ unto everlasting life.

Abel was followed by Seth and the holy line of patriarchs. Cain was supported by the serpent brood of which he was the progenitor. And the holy warfare continued. But the “sons of God” and the seed of the serpent amalgamated. And soon the wickedness of man was great upon the earth as a result. Finally all that remained of the church was the eight souls that entered the ark. It was a small remnant indeed. And it was exposed to the fury of the world that every day and every moment of the day was threatening to overwhelm and destroy it. The plight of the church was hopeless. But the Lord brought deliverance. He sent the flood; by its water He destroyed that wicked race corrupting the earth, and thereby separated His church from it, and He brought forth the righteous Noah from the ark an heir of the new earth and world.

That the event was typical-prophetical is plain from the Scriptures at II Peter 3:19-21: “By which He also went and preached to the spirits in prison; which sometimes were disobedient, when once the longsuffering of God waited in the days of Noah, while the ark was a preparing, wherein few, that is eight souls, were saved by the water. The like figure, whereunto, even baptism doth now save us. . . .”

Let us take notice of the expression, “A like figure. . .” It is equivalent to the statement, “The water of the flood and the salvation that God worked through this water was a figure, a type, and so likewise baptism.

By the flood the head of the serpent was again crushed typically and prophetically.

Thus through the work of the flood in connection with the verbal revelations to Noah a great new light was shed upon the promise of the protevangel. Through this work of God the gospel concealed in the protevangel underwent a marked development. 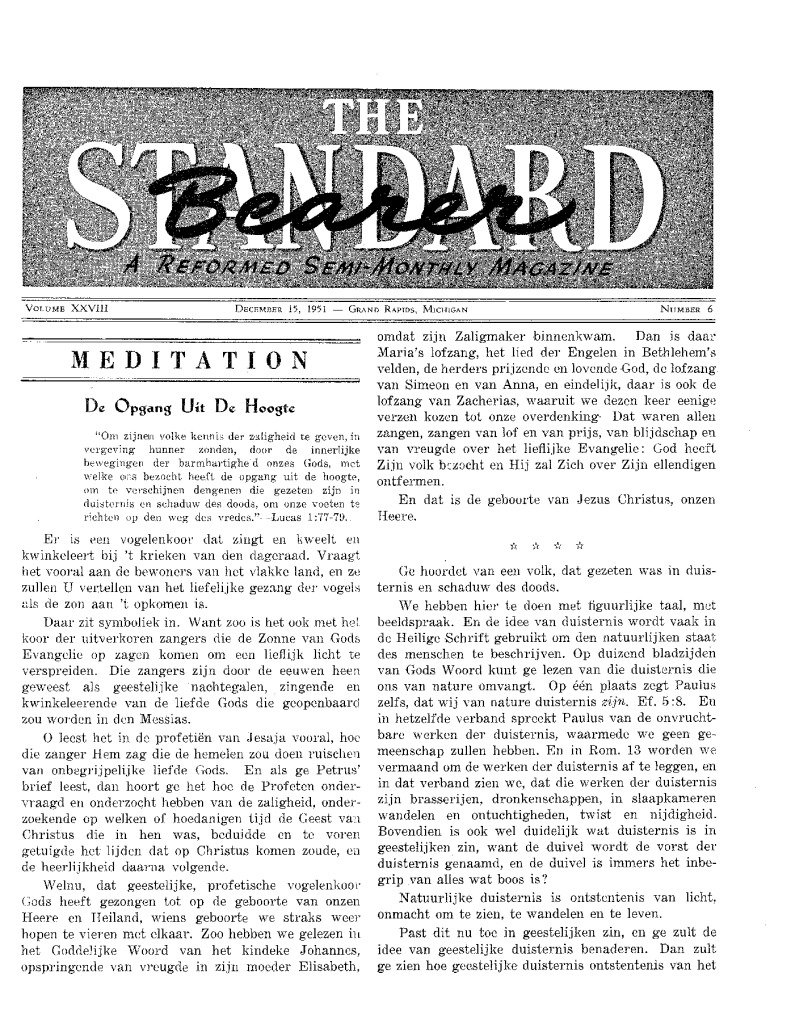