The Prophecy of Malachi: Covenant Faithfulness and Unfaithfulness (8)

Rev. Hanko is pastor of the Protestant Reformed Church of Lynden, Washington. Previous article in this series: April 15, 2006, p. 324.

2:4. And ye shall know that I have sent this commandment unto you, that my covenant might be with Levi, saith the LORD of hosts.

2:5. My covenant with him was of life and peace; and I gave them to him for the fear wherewith he feared me, and was afraid before my name.

2:6. The law of truth was in his mouth, and iniquity was not found in his lips; he walked with me in peace and equity, and did turn many away from iniquity.

2:7. For the priest’s lips should keep knowledge, and they should seek the law at his mouth: for he is the messenger of the LORD of hosts.

We must understand that, even though God’s covenant is unconditional and everlasting, a covenant that cannot be broken and destroyed, a covenant that depends only on God and His grace, God’s people have obligations and responsibilities in that covenant. The covenant does not depend for its existence on them and on their faithfulness, but those duties are nonetheless important in that they are evidence of God’s relationship to His people and prove the power of His covenant of grace.

Indeed, though the covenant itself does not depend on the faithfulness of God’s people, their own enjoyment of covenant blessings and their own assurance of their place in God’s covenant do. When they are unfaithful they cannot possibly have any assurance of a place with God. When they walk in sin, their own consciences testify that they are God’s enemies, not His friends. As the Canons of Dordt put it:

By such enormous sins, however, they very highly offend God, incur a deadly guilt, grieve the Holy Spirit, interrupt the exercise of faith, very grievously wound their consciences, and sometimes lose the sense of God’s favor for a time, until, on their returning unto the right way of serious repentance, the light of God’s fatherly countenance again shines upon them (V, 5).

Here God speaks of the covenant responsibilities that belonged to the priests and through them to all Israel. Those duties and responsibilities include those already mentioned: the worship of God through the sacrifices and offerings and the duty of being separate and holy to God. These duties the priests had neglected and despised. Now God speaks of a third responsibility, that of knowing and teaching the law of God, and of judging Israel according to that law.

That this was a priestly duty is clear fromDeuteronomy 17:8-11 and Deuteronomy 19:17, 18. The first of these passages reads:

If there arise a matter too hard for thee in judgment, between blood and blood, between plea and plea, and between stroke and stroke, being matters of controversy within thy gates: then thou shalt arise, and get thee up into the place which the Lord thy God shall choose: and thou shalt come unto the priests and Levites, and come unto the judge that shall be in those days, and inquire; and they shall shew thee the sentence of judgment: and thou shalt do according to the sentence, which they of that place which the Lord shall choose shall shew thee; and thou shalt observe to do according to all that they inform thee.

That duty of the priests in regard to the law had three parts, all mentioned here. First, the priests had to know the law. This is implied in what God says of Levi: “the law of truth was in his mouth.” It is also implied in the fact that the priest’s lips were to “keep knowledge.” The idea is not just that he had the responsibility of teaching the law, but that he had to have it ready to hand as it were. Second, the priest had to be a teacher of the law. Seeking the law at the mouth of the priest did not just mean seeking a judgment from him, but learning the law from him. There is an example of this being done in I Chronicles 30:22, where the Levites in the days of Hezekiah are referred to as those “that taught the good knowledge of the Lord.” Last, the priest was a judge who interpreted and applied the law to the people, explaining what the law required and admonishing Israel to live in obedience to God’s law.

In the Old Testament this meant that the priests were always also prophets. Even wicked Caiaphas could prophesy of Christ because he was high priest. Of this we read in John 11:49-52: “And this he spake not of himself: but being high priest that year, he prophesied that Jesus should die for that nation….”

In the New Testament it is a reminder of the responsibility that every teacher and minister of the Word of God has. He must bring only the word of the king and must add nothing to it nor take anything away from it. He may not do that as far as the Scriptures themselves are concerned (Rev. 22:18, 19), and he may not do that in preaching the Scriptures. It is also a reminder, however, of the priestly duties of every believer. Holding the office of a priest (Rev. 1:6), every Christian is also a prophet, and as prophet he must know, teach, and judge according to the Word of God. He must do that in his own home as a married person and as a parent. He must do that in his daily calling as a witness. He must do that in the church and in relation to the other members of the church. Always and everywhere he is God’s prophet.

The value of the knowledge of God that is the province of every priest-prophet cannot be overestimated. Scripture speaks of its value inProverbs 1:4; Proverbs 2:6; Jeremiah 22:16; Hosea 4:6, and many other passages, but it is John 17:3, more than any other passage, that shows us that this knowledge is indispensable, for it is eternal life. This knowledge the priests of Malachi’s day had despised and withheld, and so it is today. The famine of hearing the words of the Lord, prophesied by Amos, has come (Amos 8:11).

Levi himself had been faithful in his duties, but these priests, his descendants, and many others today have been unfaithful. For their unfaithfulness God always judges them.

2:8. But ye are departed out of the way; ye have caused many to stumble at the law; ye have corrupted the covenant of Levi, saith the LORD of hosts.

God continues here to rebuke the unfaithfulness of the priests as teachers of the law. Instead of judging the people according to the law of God, they judged falsely and so had caused the people to stumble at the law. They had protected evildoers by misinterpreting the law, and had been a bad example by their own refusal to keep the law of God. Verse 9 speaks of partiality in judging, that is, the taking of bribes and the favoring of the wealthy and influential. The following section is an example of such evil judgments. Though the people themselves are addressed and the priests not mentioned, they too were involved in the sins of contracting heathen marriages and in divorcing for any cause. Not only did they allow divorce for any cause, as Jesus’ controversies with the Pharisees demonstrate (Matt. 19:3), but they themselves had married heathen wives in the days of Nehemiah. Nehemiah 13:28 mentions especially one of the grandsons of Eliashib the high priest, who was son-in-law to Sanballat the Horonite, one of Israel’s enemies. They were the leaders in wickedness.

By their wickedness they corrupted the covenant of Levi, that is, they were unfaithful to their covenant responsibilities and to the great God of the covenant and led the people astray as well, so that they too were unable to enjoy the blessings and privileges of fellowship with God. The covenant relationship between God and His people was harmed and interrupted by the evil deeds, the evil example, and the evil teachings of these false priests.

Such unfaithfulness corrupted the covenant of God with His people but did not destroy it, for even though Phinehas and his descendants eventually lost their priestly office, that covenant was continued and fulfilled in Christ. Of that there are hints already in these verses, for He alone is the one in whose lips is found no iniquity (v. 6); He only is able truly to turn many from iniquity (v. 6); and He, as we shall see in Malachi 3:1-3, is the true Messenger of the LORD of Hosts (v. 7).

2:9. Therefore have I also made you contemptible and base before all the people, according as ye have not kept my way, but have been partial in the law.

In the justice of God, His judgments are always fitting, or as we sometimes say, the punishment always fits the crime. Because they polluted the offerings of God, He would pollute them by spreading the dung of their solemn feasts on their faces, and He would destroy their place and reputation among the people (v. 3). Because they turned away from His law and would not uphold it, He pronounces a law of judgment and cursing against them. Here, be cause they had treated not only His offerings but also His law with contempt, God promises to make them contemptible in the eyes of the people.

This is usually understood to mean that God would take away their credibility and honor in the hearts and lives of the people, so that the priests would more and more lose their influence. We see something like this happening today with the Romish priesthood, through its wickedness and corruption, and it often happens as well with other church leaders who have departed from God’s ways. Sometimes this comes about when God leads them into falls and sins that destroy their credibility. Sometimes it happens simply because they begin teaching and preaching such nonsense that even the fools who listen to them begin to realize their folly.

God is not mocked. What a man sows, even in church office, he also reaps. He who sows to the flesh, as these priests did and as many priests do today, of the flesh reaps corruption. What he gains is itself corruptible and does not deliver his soul from eternal corruption. The same is true of those priests who in the office of believer sow to the flesh. They, too, for their unfaithfulness reap unrighteousness, indignation, wrath, tribulation, and anguish and do not profit from their covetousness.

In the last day, the great day of judgment and wrath, every unfaithful priest will receive a just reward. Though in this life he may have had the adulation of men, he will be made contemptible and base. Not just before the people whom he cheated and deceived and to whom he lied, but before all the nations he will be told by Christ, the true Messenger of the covenant, “Depart from me; I never knew you.” 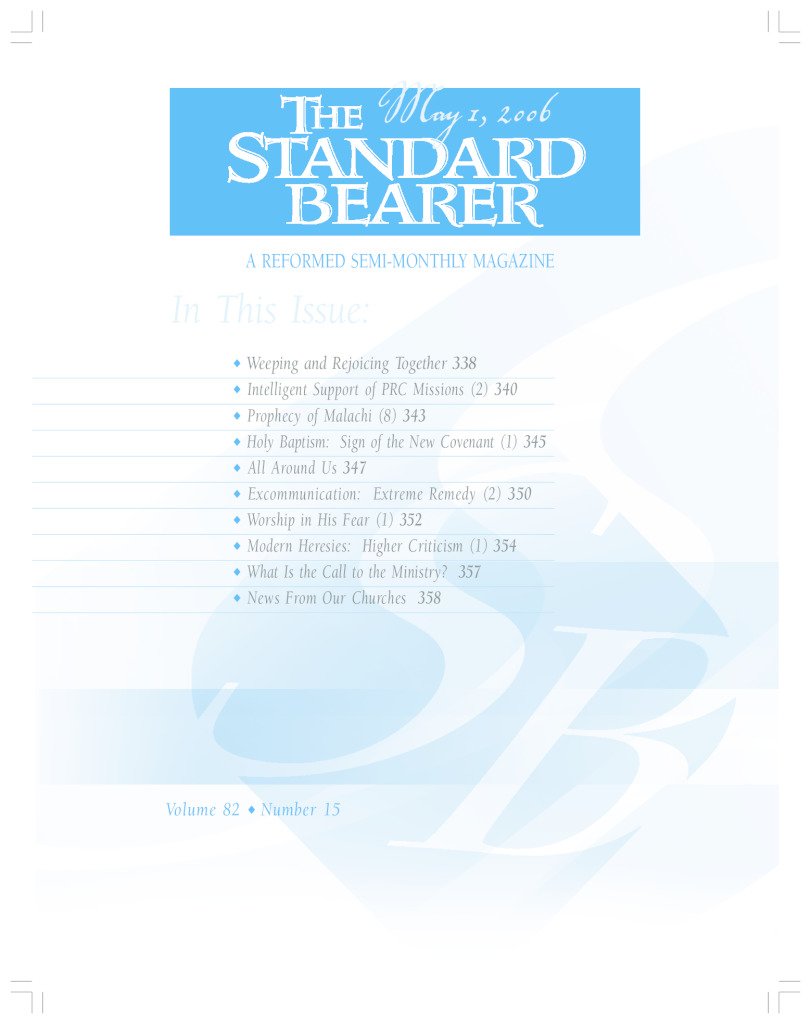