The Prophecy of Malachi: Covenant Faithfulness and Unfaithfulness (4)

The Prophecy of Malachi: Covenant Faithfulness and Unfaithfulness (4)

Rev. Hanko is pastor of the Protestant Reformed Church of Lynden, Washington. Previous article in this series: December 1, 2005, p. 111.

5. And your eyes shall see, and ye shall say, The LORD will be magnified from the border of Israel.

Why does the prophet speak in this first disputation of the wrath of God and its eternal source (Malachi 1:2-4)? The answer lies here in verse 5. God’s eternal hatred in reprobation and its results are not an end in themselves. Reprobation is always subordinate and serves another purpose. Here that purpose is described in terms of Israel’s seeing God’s judgments on Edom, understanding that those judgments are a result of His eternal wrath, learning that His love is also eternal and unchangeable, and thus praising Him.

That is the only possible reaction to these judgments and their eternal source, other than disbelief and scorn. Seeing God’s fury poured out on the heathen, realizing that the outpouring of His wrath is not a hasty reaction against the wickedness of the heathen but the working out of an eternal and unchangeable decree, we tremble before God, and cease to speak carelessly and foolishly of Him.

Especially we do not speak as Israel did in the days of Malachi, as though His love is a temporary and changeable thing like ours. Seeing these judgments we do not say, “Wherein hast thou loved us?” but trust that like His wrath and hatred, His love also is unchangeable and abiding, even when circumstances seem to indicate otherwise.

The Lord, however, begins to speak of the fact that it would no longer be in Israel, but among the heathen nations, the Gentiles, that He would be feared and honored. “From the border of Israel” does not mean “within the borders of Israel,” but “from the border of Israel outward.” In Israel, with only a few exceptions, His name would continue to be dishonored and His love for His people questioned. This becomes clear especially in Malachi 1:11: “For from the rising of the sun to the going down of the same my name shall be great among the Gentiles; and in every place incense shall be offered to my name, and a pure offering; for my name shall be great among the heathen, saith the LORD of hosts.” It is the result of that Word of God that we Gentiles now know of His eternal love for us.

1:6. A son honoureth his father, and a servant his master: if I then be a father, where is my honor? and if I be a master, where is my fear? saith the LORD of hosts unto you, O priests, that despise my name. And ye say, Wherein have we despised thy name?

1:7. Ye offer polluted bread upon my altar; and ye say, Wherein have we polluted thee? In that ye say, The table of the LORD is contemptible.

1:9. And now, I pray you, beseech God that he will be gracious unto us: this hath been by your means; will he regard your persons? saith the LORD of hosts.

In this longest section of the book of Malachi God addresses the priests, not only because they were the spiritual leaders of the people and were responsible for much of the apostasy of the nation, but also because they ought to have been the ones who rebuked the people for their apostasy and tried to turn them from it.

The sins of the priests were three. They had polluted His offerings, they had despised their own position in the church and kingdom of God, and they had been partial in judging the people. These sins are described in Malachi 1:6-10, 12-14 and in Malachi 2:5-8.

Each mention of priestly sin is followed by a statement of the judgment of God upon the priests for their wickedness. For the sin of despising and misusing their office, God would take away their priestly office and give it to the Gentiles (Malachi 1:11). For the sin of polluting His offerings, the offerings from which they themselves lived and received their sustenance, God would curse the produce of flock and field, and thus take away from them everything they had (Malachi 2:2-4). For the sin of partiality in judgment, the sin of despising His law, of which they were the caretakers, God would make them contemptible and despised in the sight of the people (Malachi 2:9).

We must understand that those who are the spiritual leaders of God’s people always bear a greater responsibility for apostasy and wickedness in the church than do the members. They have this greater responsibility because of their position and calling. They are responsible not only when they actually encourage apostasy in the church by their own conduct and example, as these priests did, but also when they fail to rebuke the wickedness of the people.

That is not to say, however, that the people themselves are without fault. Not only do they often follow the example of godless leaders blindly and ignorantly, but they are sometimes themselves a cause of the wickedness of their leaders in that they refuse good counsel, insist that their leaders tell them only what they want to hear (Is. 30:10), and stubbornly go their own way.

What usually happens is this: the people themselves become worldly and carnal, as they were in the days of Nehemiah and Haggai, and when they refuse to hear rebuke and to turn from their wicked ways, their leaders, instead of continuing to rebuke them and to resist them in their wickedness, begin to cater to it. Eventually, the leaders become leaders in wickedness and lead the people deeper and deeper into it. That seems to be what happened in Israel. It certainly is what happens in the church today.

Before pointing out the actual sins of the priests, God says that by their wickedness they had failed to honor Him. The honor and fear they expected and received from their own children and servants, they refused to give to Him. To emphasize the point He speaks of Himself as their father and master, which indeed He was, and not just a father and a master, but the Father and the Master. Yet they despised His name and never rendered Him His due.

That He is the Father of His people is not a truth mentioned often in the Old Testament. The fact that His Fatherhood was seldom revealed in the Old Testament is explained in Galatians 4:1-7, where Israel, though God’s child, is compared to an immature child, who, under tutors and governors, was treated little different than a servant. Nevertheless, the Fatherhood of God was known by the people of God (Ex. 4:22, 23), and the priests, who were the teachers of the law, ought to have known it, and knowing it have honored and obeyed God as a Father. Certainly they knew that He was their Master or Lord, and they should have feared Him at least for that. But they did not. Indeed, they did not even recognize their own sin, but when confronted with their sin insisted that they had not refused to honor Him. That was the import of their question, “Wherein have we despised thy name?” It was not an innocent question, but an expression of their doubt and distrust of God. It meant: “We have not done so—there is nothing that can possibly be mentioned against us as proof of such a lack of honor.”

It is here, for the first time, that God uses the name LORD of hosts. He does that in connection with what follows concerning the priestly offerings and office. That name refers to the fact that God is the sovereign owner and ruler of all things and that they are used by Him to fulfill His own purpose and good pleasure—all things are a mighty host, an army, which marches in His service, willingly or even unwillingly. Here God is saying that as the LORD of hosts the offerings and offices of the priests belonged to Him, not to the priests themselves, and that they were not to be used as the priests saw fit, for their enrichment and profit, but for His honor. In the next verse He even speaks of the altar as His own. The priests by their conduct had acted as though it were not so—as though the offerings did belong to them. They behaved, in other words, in exactly the same way as many ministers, elders, and leaders of the church behave today—that the worship and service of God and the offerings brought to God in worship belong to them to do with as they please.

We must understand that the priests received their own sustenance and support from these offerings. The shewbread, when taken from the table, was given to the priests for food. The meat offerings were also theirs, as was a part of every offering except the whole burnt offering. It is this matter that Malachi is addressing, since the priests were not satisfied with the offerings they received. They saw their work not as a calling in relation to God, but as a poor-paying job. The contempt of which verse 7 speaks, therefore, is the contempt the priests felt for their own work as priests.

This contempt led to a corrupting of the sacrifices. The point of verse 7 is that the priests allowed the people to bring every kind of unacceptable offering to God, including blind, lame, and sick animals, though that was forbidden in the law (Ex. 22:31; Lev. 7:24; Lev. 17:15; Lev. 22:8; Ezek. 4:14; Ezek. 44:31). What was imperfect was unclean and could not even be eaten by the people. Yet the priests allowed the people to bring such offerings, and themselves ate of them, in order to have more than they would otherwise have had.

Such wickedness was not only the fault of the priests, but also of the people, in that they did not give willingly to the Lord and grudged every good thing that was offered to God. Nevertheless, their grudging covetousness and poor giving did not excuse the wickedness of the priests.

This same contempt is often found in those who have the calling to preach the gospel. It usually becomes evident, not in an open contempt for the service of God but, as with these priests, in a dissatisfaction with the wages they receive for their work and in the lack of honor they show towards God.

Dissatisfied, such men give as little honor to God as they possibly can, changing the worship of God into a sideshow and putting themselves at center stage. And like these priests, they seek to enrich themselves, by allowing the people to bring every kind of unacceptable offering, no longer insisting that God must be worshiped as He has commanded. 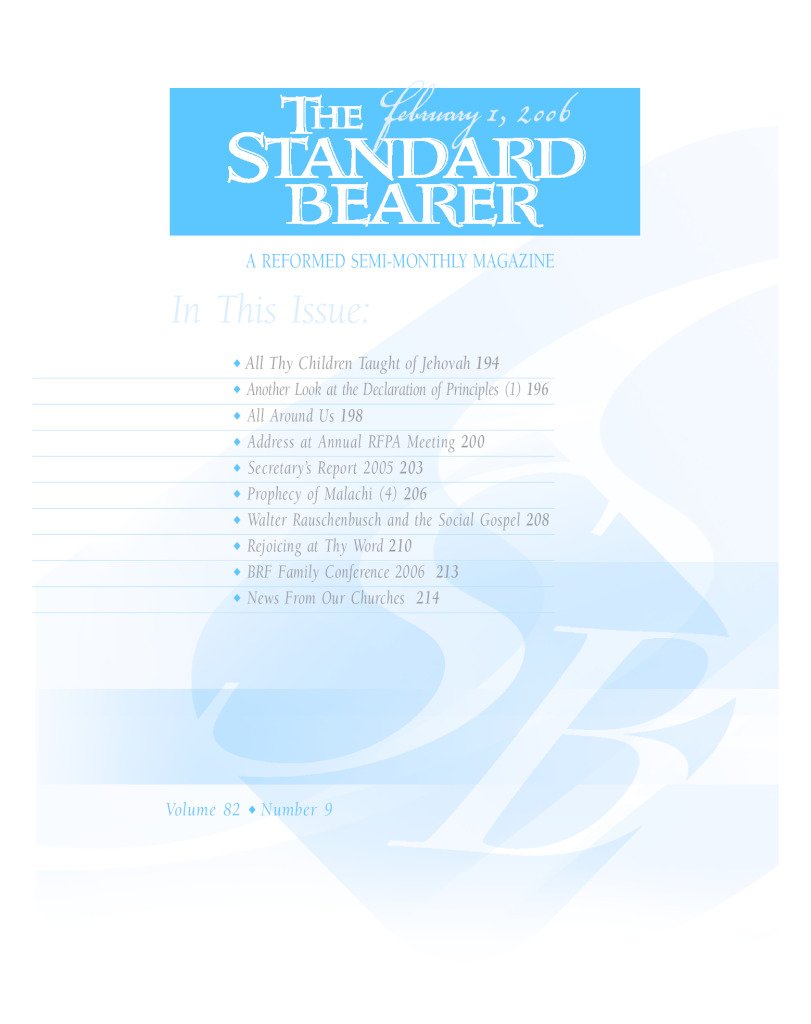