A book review about a Presbyterian (and not only so, but a philosopher!) might seem misplaced in a Reformed magazine such as the Standard Bearer. Such a view would be understandable, but it would also be incorrect. For there is much in this book that is instructive for Reformed Christians in general and the readership of this magazine in particular. Not a few of the controversies described in this book concern doctrines that led to the formation of the Protestant Reformed Churches and constitute the very reason for their continued existence.

Dr. Gordon H. Clark (1902-1985) was a renowned Christian philosopher and Presbyterian theologian. As a philosopher, his major contribution was the development of a thoroughly Christian theory of knowledge; as a theologian, he subscribed strictly to and assiduously defended the system of doctrine laid down in the Westminster Confession of Faith. His uncompromising stand for Westminster orthodoxy brought him into sharp conflict with leaders in his own denomination, the Orthodox Presbyterian Church (OPC).

The author, Douglas Douma, as a native of Grand Rapids, Michigan, is well acquainted with the history of the common grace controversy that convulsed the Christian Reformed Church (CRC) in the early 1920s. Accordingly, he has performed an invaluable service by locating the struggles that faced Dr. Gordon Clark in the 1940s within the larger context of the earlier controversy.

Of the thirteen chapters, three are devoted to the controversy over Clark’s ordination to the ministry of the Orthodox Presbyterian Church in 1944—what has come to be known as the Clark-Van Til Controversy. I believe the value of the book lies in the author’s lucid treatment of the controversy. Herman Hoeksema took a keen interest in the controversy, writing a series of articles in the Standard Bearer at the time. Douma, following Hoeksema, explains the controversy in the OPC in terms of the arguments over common grace in the CRC in the early 1920s. Douma quotes extensively from Hoeksema’s articles and obviously shares his viewpoints.

In November 1944, five members of the faculty of Westminster Theological Seminary (Philadelphia) led by Dr. Cornelius Van Til lodged a complaint against Gordon H Clark’s ordination to the ministry. This document became known simply as The Complaint. It ad dressed four theological topics: the incomprehensibility of God; the relationship of the faculty of knowledge to other faculties of the soul; the relationship between divine sovereignty and human responsibility; and the free offer of the gospel. The Complaint represented the theology of Dr. Van Til who had been raised in the CRC and was a minister there until taking up a teaching position at Westminster Seminary.

Of the four topics the first received most treatment. The complainants’ doctrine of the incomprehensibility of God governed their understanding of the other three issues. It is not easy to follow all the lines of debate between Clark and Van Til on this subject, but Douma makes it as clear as possible in chapter seven. Both parties to the controversy agreed that, since God is infinite, man can never know Him fully and exhaustively. But they differed in the question of the relation of our knowledge to God’s knowledge. The whole question came down to the matter of the content of God’s knowledge and the knowledge that is possible to man; and specifically this question: does a proposition have the same meaning for God and man? To this question Clark gave a resounding “yes”; the complainants denied it.

The complainants put the matter beyond any doubt when on page 5 of The Complaint they declared, “we dare not maintain that His knowledge and our knowledge coincide at any single point.” Van Til had developed a two-level theory of knowledge according to his Creator-creature distinction. According to this theory, the knowledge that God possesses of Himself and all things is qualitatively different than man’s knowledge; in other words, it is not a difference in degree, but in kind. In words that have come to define the thinking of almost every reputedly conservative Reformed church and theologian since, The Complaint declared: “Because of his very nature as infinite and absolute the knowledge which God possesses of himself and of all things must remain a mystery which the finite mind of man cannot penetrate” (112). Clark’s disavowal of this position and his unwavering conviction that God’s revelation of Himself to us in Scripture is logical and self-consistent led the complainants to charge him with rationalism. For the same convictions, Herman Hoeksema was similarly charged, as are the Protestant Reformed Churches to this day.

Clark completely repudiated Van Til’s view of knowledge. After stating some true propositions from the Bible he wrote: “The propositions mean to the man who knows them, to the man who grasps their meaning, exactly what they mean to God, although God, as was said knows implications of these propositions that man does not know; but the truth itself is the same for man as it is for God. If a man does not grasp God’s truth, he grasps no truth at all, for there is no other truth than God’s truth” (260).

In a devastating attack on the Van Tilian position, Clark went on to write: “The Complaint makes the truth God has qualitatively different from the ‘truth’ man has. There is not a single point in common. Whatever meaning God has, man cannot have. And since the Bible teaches that God has all truth, it must follow on the theory of The Complaint that man has no truth. The theory of The Complaint is therefore skepticism” (260). Clark here makes a crucial connection between revelation and the knowledge of God. The Bible itself claims to be a revelation of God’s truth, but if man is unable to grasp divine truth then in spite of revelation God remains hidden. Essentially, therefore, Van Til’s position is no different than modernism.

Herman Hoeksema, in his articles on the controversy, agreed with Clark’s criticisms of The Complaint. Hoeksema too believed that Van Til’s doctrine of the incomprehensibility of God was not the historic Reformed doctrine. He also repudiated Van Til’s belief that a proposition cannot have the same meaning for man as for God and that consequently Van Til had a skeptical view of the Bible. Hoeksema wrote:

To say that any proposition does not have the same meaning for God as it has for man is, it appears to me a rationalistic contention. The complainants do not derive this proposition from Scripture, nor will they ever be able to find Scriptural ground for it…. [It is also] a denial of the truth of revelation. That our knowledge of God is finite, and that even through revelation we can never comprehend God, the infinite One, has always been held by all theologians. But if what God revealed to us has a different meaning for Him than for us, God is not only incomprehensible, but also unknowable. Then revelation itself is not true and reliable.

And so, it still seems to me that the issue between the complainants and [Dr. Clark] is not the incomprehensibility of God, but the question whether revelation itself is intelligible to us. To deny the latter is to destroy the very foundations of theology (Standard Bearer, Vol. 21, Issue 12, [March 15, 1945], 265).

Another of The Complaint’s points concerned Clark’s denial of the so-called “free offer of the gospel” (the doctrine that in the preaching of the gospel God expresses a desire to save all who hear, reprobate and elect alike). Clark rejected this doctrine on the basis that to say (as did the complainants) that God sincerely desires the salvation of those whom He has from eterni ty determined not to save is an outright contradiction. The book’s treatment of this point is outstanding. It is an excellent and fair overview of the whole free offer controversy tracing the history of the doctrine from its origin in Scottish Presbyterianism to its later manifestation and development in the CRC in the early 1920s. The author draws attention to the influence of the CRC on the Clark case. In so doing he quotes from Herman Hoeksema, who also connects the introduction of the doctrine into the OPC with the presence of three former CRC ministers on the faculty of Westminster Seminary, the most notable being Cornelius Van Til.

Chapters five and ten are an exceptional analysis of one of Clark’s great contributions to Christianity, namely his development of the apologetic system known as “presuppositionalism.” There are two components to presuppositionalism: Clark’s rejection of empiricism (which he viewed as logically invalid) and his acceptance of worldview thinking. Traditional Christian apologetics, such as the classical proofs for the existence of God, were largely based on empirical arguments. Clark believed all such arguments had as their starting point non-Christian assumptions; hence, they could never be a satisfactory foundation for a truly Christian philosophy. As Douma puts it: “he believed that one must reject non-Christian presuppositions in favor of a Christian one: the truth of the Bible” (67). Clark himself later put it this way: “Instead of beginning with ‘facts’ and later discovering God, unless a thinker begins with God, he can never end with God, or get the facts either” (58).

Clark’s significant and interesting career as a college professor is ably described by Douma, together with interesting anecdotes and recollections of his teaching style. Clark’s family life, love of chess, and pursuit of drawing and painting in his later years are some of the other aspects of his life that make for interesting reading.

Clark was one of the great Christian thinkers of his era, but he was also a humble servant of Christ who suffered for his unshakeable commitment to the absolute authority of the Bible. Clark’s work was a clear trumpet call to the church of his day to an unashamedly doctrinal Christianity as the only effective answer to theological and moral relativism. To read this book is to hear that call—and to hear it loudly—in our own day. 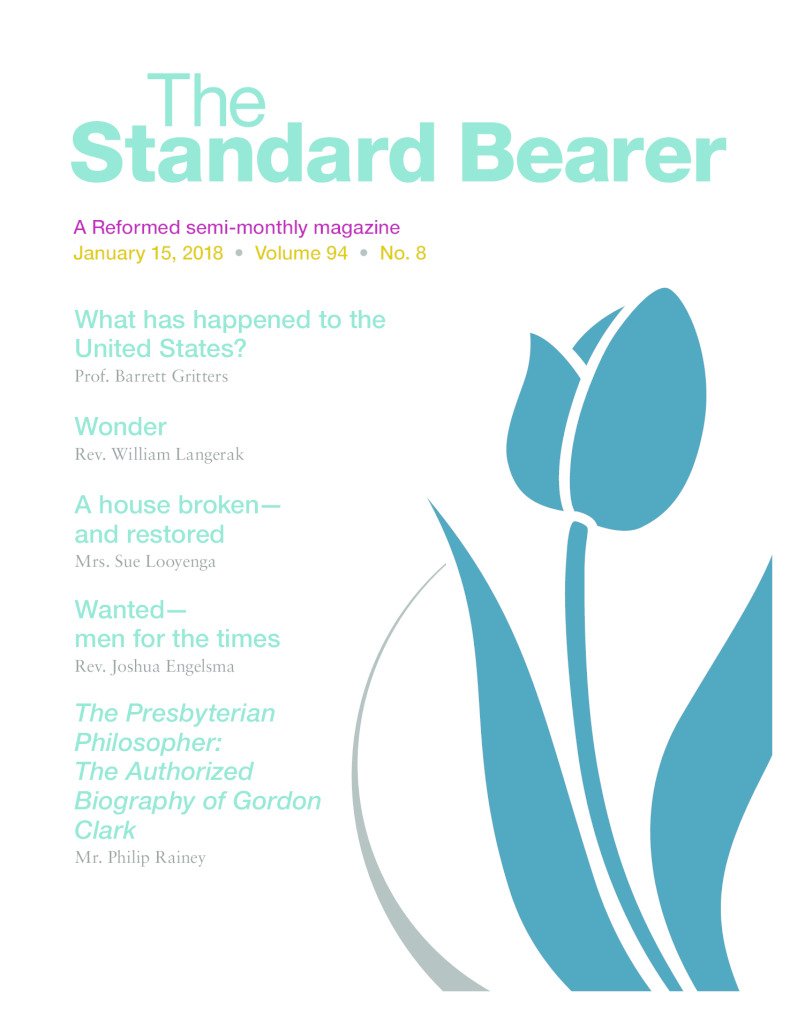