The PRC and the RES

The PRC and the RES

Increasingly, it seems to me, the realities of what I would call—for want of a handier term—our ecumenical calling and responsibility are being pressed upon us as Protestant Reformed Churches. As will be evident, in a measure at least, to those who follow our Standard Bearer, the Lord has been bringing us into contact with individuals and groups all over the world who are, it seems, genuinely interested in maintaining the Reformed faith and who have been attracted to us because of our Reformed testimony. In many instances the means whereby such contacts have been established has been our Standard Bearer, which, though not an ecclesiastical paper, is nevertheless recognized as a literary voice of our Protestant Reformed witness. In other instances, other literature emanating from our churches has been instrumental. In still other instances, contact has been initiated through word-of-mouth testimony of persons within and outside of our churches concerning our churches and their position. Sometimes these contacts come in a most unexpected manner and from surprising sources. Some of these contacts are only personal and individual, conducted and fostered by private correspondence of various ministers in our churches—and I myself (and I know also of others) have conducted in recent years a rather voluminous foreign correspondence. Others of these contacts are of an official and ecclesiastical nature, and are already on the docket of our synodical Committee for Correspondence with Foreign Churches.

Personally, I am of the conviction that we cannot fail to see the hand of the Lord in this, especially as in these last days apostasy increases and the lines of demarcation are drawn ever more clearly between those who want to maintain the Reformed faith and those who do not. Under the impetus of attack, those who desire to remain faithful are more and more attracted to one another. I believe we may expect more of this as time goes on. And I also believe that our Protestant Reformed Churches, just because the Lord has so signally blessed us in keeping us faithful to the truth, have a special calling not only to foster these contacts, but also to give help and leadership to others who manifest an interest and desire to maintain a like precious faith with us, and to do so as much as in us lies.

This calling must, of course, be met responsibly.

This means, in the first place, that we are not interested in ecumenicity for ecumenicity’s sake, or for bigness’ sake, or merely for the sake of being able to point to the fact that we, too, have contact and fraternal relationships with other churches. No, our interest is solely in the expression of that unity which is characteristic of the holy, catholic church. And this means primarily a unity of faith, which is the same as saying a unity in and on the basis of the truth as it is in Jesus Christ. And for us that truth is set forth in Scripture and the Confessions. This is primary. It must always be and remain the controlling factor in any contacts and relationships with other churches.

In the second place, we must have a certain healthy openness as churches. We must be able to distinguish between essentials and nonessentials, and, be prepared not to reject those who differ from us in nonessentials. We must be able to distinguish between those who stand at enmity against us because of the Reformed faith and those who are fundamentally one with us in our common battle for the faith, but who may not be in every respect like us, may not see eye to eye with us on every matter, or who may differ from us because of varying historical backgrounds, denominational struggles, nationality, etc. With the former one cannot work, except at cross purposes. With the latter one is called to co-labor, exactly in order that together we may bring to manifestation our unity in the faith.

In the third place, we must with carefulness determine the best means of investigating, establishing, and practicing any possible relationships with other churches. We are small and of limited capacity as a denomination; and some of those with whom there is a possibility of contact are also small. There are problems of distance and communication. But with the means and ability which the Lord provides, we must put forth our very best efforts. For this labor, too, belongs to our obedience to the Lord Christ.

But once more I wish to emphasize it: all our labors in this direction must be in obedience to and in the service of the truth! Any other kind of unity is not true unity.

It also lies in the nature of the case that in order for our churches to act responsibly in these matters they must be informed. And with a view toward informing our people, I purpose to editorialize a few times on various matters connected with our ecumenical calling.

The first item to which I shall call attention is that of the Reformed Ecumenical Synod. Once more our churches have received an invitation to send an official observer to the RES which will meet this coming summer in Sydney, Australia.

And the question confronting us is: what must be our response to this invitation? Should we accept? Is it our duty to accept? And would it be worthwhile, if it is proper, for our churches to send a representative to the RES-Sidney, 1972?

In order to consider this question intelligently we must go back a bit in history.

It was in 1950 that the whole question of possible membership or participation in the RES arose at our Synod for the first time. After considerable discussion—and disagreement—it was decided on the basis of various grounds to send official visitors to the RES-Edinburgh. This decision was taken in 1952. Although we never did actually send these visitors because of our internal difficulties in 1953, nevertheless this decision was important, especially because of the third ground adduced. That ground was: “We do not bind ourselves to anything by at tending the sessions of the Ecumenical Synod as official visitors from our churches.” The ground is, of course, a rather poor one in this negative form. But my point now is that this ground is factually incorrect. Under the Rules of the RES, official observers and official guests are required to express agreement with the Basis of the RES. And historically, it has been the question of this Basis which has caused past synods to hesitate as to membership or even as to official observers or visitors.

The foundation of the Reformed Ecumenical Synod shall be the Holy Scriptures of the Old and New Testaments as interpreted by the Confessions of the Reformed faith, namely the Second Helvetic Confession, the Heidelberg Catechism, the Gallican Confession, the Belgic Confession, the Westminster Confession, the Canons of Dart, the Thirty-nine Articles. It should be understood that these Scriptures in their entirety, as well as in every part thereof, are the infallible and ever-abiding Word of the living Triune God, absolutely authoritative in all matters of creed and conduct, and the Confessions of the Reformed faith are accepted because they present the divine revealed truth, the forsaking of which has caused the deplorable decline of modern life. It has to be emphasized that only a whole-hearted and consistent return to this Scriptural truth, of which the Gospel of Jesus Christ is the core and the apex, can bring salvation to mankind and effectuate the so sorely needed renewal of the world.

Because of the diversity in the forms of government of the Reformed Churches, uniformity of church policy cannot be stressed as a fundamental requisite, except in so far as the principles of this policy are contained h the Reformed Confessions, as, for example the headship of Christ and the marks of the true Church: the pure preaching of the Gospel, the Scriptural administration of the Sacraments, and the faithful exercise of discipline.

In 1968 our churches once more received an invitation to send an official observer, this time to the RES-Amsterdam.

In response to this invitation our Synod took the following decision which was forwarded to the RES Secretariat and to the calling church.

Decision on Invitation to the Reformed Ecumenical Synod

1. That we are thankful for this invitation.

2. That the Protestant Reformed Churches are in full agreement with the Doctrinal Basis of the RBS in so far as it refers to Scripture and the Reformed Creeds.

3. That, however, the Protestant Reformed Churches:

b. Do not agree with the concluding sentence of the first paragraph of the Basis: “It has to be emphasized that only a wholehearted and consistent return to this Scriptural truth, of which the Gospel of Jesus Christ is the core and apex, can bring salvation to mankind and effectuate the so sorely needed renewal of the world.”

1. Neither Scripture nor the confessions hold forth the hope of such a wholehearted and consistent return to the truth of Scripture of which this statement speaks.

2. Neither Scripture nor the confessions hold forth the expectation of a renewal of the world through such a wholehearted and consistent return.

3. Neither Scripture nor the confessions speak of an effectuating of either such a wholehearted and consistent return or of such a renewal of the world.

4. On the contrary, Scripture and the confessions speak of the renewal of all things through the wonder of grace in our Lord Jesus Christ, and of the calling of the church to be a witness of the light in the midst of the darkness of this present world, and to maintain and proclaim the truth of the gospel, in order that the church may be gathered and preserved, with a view to the coming of our Lord and the realization of this renewal of all things. Belgic Confession, Articles 27, 29, 37. Heidelberg Catechism, Questions 52, 54, 123,127.

4. That in the light of the requirement that observers shall express agreement with said Basis as stated above, the Protestant Reformed Churches find it impossible to accept the invitation to send an observer to the Reformed Ecumenical Synod in Amsterdam.

5. That in the light of the requirement that observers shall express agreement with the Doctrinal Basis, and in the light of our inability to express full agreement, we inquire whether the RBS is willing to grant the Protestant Reformed Churches observer-status with the understanding that they take exception to the above-mentioned elements of the Basis.

It will be evident that this is a radically different decision than that of 1952. Yet the decision as such did not shut the door to participation completely.

What the response of the RES was we shall see next time, D.V. 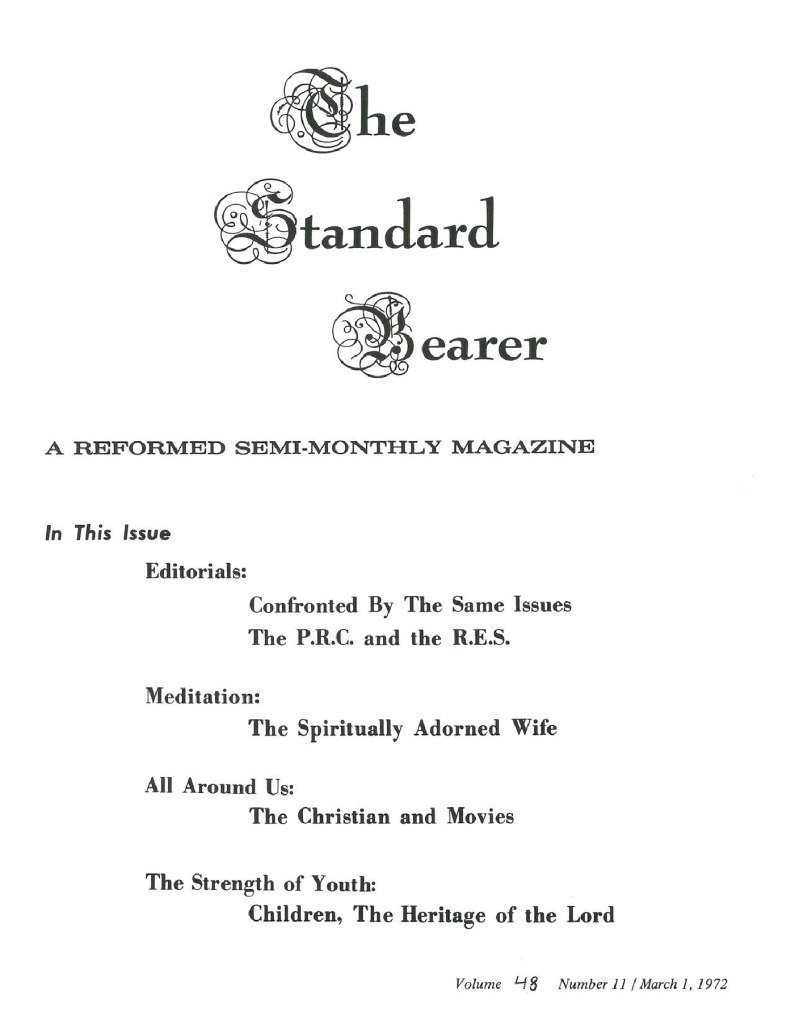