The Power of Prayer

The Power of Prayer

There is power in prayer. Prayer is a tool which God gave us, through which He blesses us. Does not prayer change us, change circumstances, and help others? Is it wrong for a group of saints to get together in prayer for a family in need, or when tragedy strikes, or when drought or sorrow hits us? Is it not better to present our cares to the Lord than to wring our hands in frustration for things we cannot change? Reference is made to James 5:13-18, Ephesians 6:18, and I Peter 3:12, 5:7.

“Prayer changes things” is a familiar adage. This is taken to mean that prayer can heal the sick, avert a tragedy, bring an end to drought, or even prevent or deliver from the tragedies of war. This is understood to represent the real power of prayer, for, if this were not the case our prayers would be useless. With that in mind prayer chains and prayer groups are organized in order to stress before the Lord our needs or the needs of others. How this all fits in with the sovereign, unchangeable will of God who governs all of our lives is often a question. Also the passages of Scripture referred to are often misunderstood.

A superficial reading of the well-known passage inJames 5:14-17 would seem to substantiate the idea that prayer will heal the sick, at least in some cases. James teaches us: “Is any sick among you? let him call the elders of the church; and let them pray over him, anointing him with oil in the name of the Lord: and the prayer of faith shall save the sick, and the Lord shall raise him up; and if he have committed sins, they shall be forgiven him. Confess your faults one to another, and pray one for another, that ye may be healed. The effectual fervent prayer of a righteous man availeth much.”

We should notice that the entire context deals with the subject of affliction, so that the believers are urged to be patient as they endure the sufferings brought on them by the world. Thus in verse 13 James says: “Is any among you afflicted? Let him pray!” When the burden of affliction weighs heavily upon us we are encouraged to seek our strength in prayer. This, no doubt, can well include the idea of physical suffering, pain, infirmities, loss of dear ones, or other trials that become afflictions which are difficult to bear. In that case we must certainly seek our refuge in prayer.

James adds to that: “Is any sick among you?” The word for sick means literally “to be weak”. The same word is used in Rom. 4:19, “And being not weak in the faith”. Also in II Corinthians 12:10, “Therefore I take pleasure in infirmities, in reproaches, in necessities, in persecutions, in distresses for Christ’s sake (the very opposite situation of that referred to by James), for when I am weak, than am I strong.” See also II Corinthians 13:4, 9. In none of those passages does the word refer to physical ailments. The idea that James brings out is rather that the person is so burdened with his afflictions that he is spiritually weak. He can no longer properly pray for himself. In that case, let him call the elders to pray for him in the name of the Lord. It is true that there are times in our lives when we are physically ill or in such mental distress that prayer becomes difficult, but the fact remains that James is concerned about the spiritual welfare of the individual.

James goes on to say in verse 15 that more than likely sin enters into such a situation. “And if he have committed sins, it shall (upon prayer) be forgiven him.” Thus again in verse 16: “Confess your faults one to another, and pray for one another that ye may be healed (forgiven).”

It is in that context that James speaks of a “prayer of faith,” verse 15. Does a prayer of faith mean the confidence that whatever we persistently ask will also surely be granted us? Obviously not. A prayer of faith is a prayer that arises out of the true, saving faith of the child of God. This faith embraces God as the God of our salvation in Jesus Christ, who loves us, cares for us, provides for all of our needs as a father for his children, and withholds no good thing from those who fear Him. “He is able to do exceedingly abundantly above all that we ask or think,” Eph. 3:20. A prayer of faith is the same as praying in Jesus Name, on the basis of His atoning death, in the confidence that He even now intercedes for us before the throne.

Summing up, we can say that James teaches us that, whatever the cause may be, there are times in our lives when the trials become very severe. In times like that we must seek our refuge in prayer. But those trials may become so severe that we become troubled, despondent, even depressed, weak in the faith. In that case we must have others, particularly the elders of the church, pray for us. Often sinful desires, evil thoughts arise within us. We may speak foolishly in our distresses. Those sins must be confessed, and will also surely be forgiven. A prayer of faith will restore to a strong and sturdy faith, and will give assurance of God’s forgiving mercies.

Thus James adds that the prayer of a righteous man availeth much. Notice that this refers to a prayer of arighteous man, one who is righteous in Christ, who loves God’s law and precepts and humbly walks with God, committing his way to the Lord. His prayer is, therefore, also a righteous prayer, which is in harmony with the will of God. Such a prayer availeth much. The example is given of the prophet Elijah, who knew from the law of Moses that when Israel departed from the Lord, God would visit them with drought and famine. That time had come in the days of Ahab. Therefore in his zeal for God’s Name and honor Elijah prayed that these judgments might come upon Israel, to bring them back to the Lord. His prayer was heard, being fully in harmony with God’s will, created in his heart by the Spirit. Under the instruction of the Lord, when Israel confessed, “Jehovah He is the God”, the man of God prayed again, and the Lord sent rain. There is a close and intimate communion of life between God and His people in Christ, wherein our wills are completely surrendered to His will.

This is the teaching of our Lord in the model prayer He gives us. Addressing our Father Who is in heaven, we express our foremost desire by saying: “Hallowed be Thy Name.” Unto that end we ask for the coming of His kingdom and make all the requests that follow. His will must be carried out in us, round about us and by us. We commit our physical needs to His care, knowing that in His wisdom and mercy He will bestow on us, His children, the necessities, the bread for each day. We trust in His providence, that almighty everywhere present power whereby He upholds and governs all things, so that all things come to us, not by chance, but from His fatherly hand, (Heidelberg Catechism, Lords Day 10).

The question may still be asked: but is there no room for bringing our daily needs before God in prayer? The answer is: of course. We must make all our needs known in prayer and supplication. We must seek the Lord diligently, praying, seeking, knocking. But the purpose never is to impose our will upon God in the hope that somehow God’s will is flexible enough to fit our desires into His eternal plan. It would be arrogance on our part to impose our will upon God, just as it is arrogance for a small child todemand favors of its parents. We pray in submission to God’s will, that His will may become evident to us and we may have the grace to surrender ourselves into God’s hands. This means that sometimes our prayers are answered as soon as we have finished praying. The Lord hears at once. Sometimes He waits to impress upon us our need. Sometimes we must learn to pray, as the Lord did in Gethsemane, “Not my will, but Thine be done”. Paul had to learn that he was to keep the thorn (whatever that may have been), but God would supply him with the necessary grace to bear it in patience.

The question may still be raised: Is there then no room for prayer groups in times of tragedy, drought, or sorrow? We read of something of that nature inMalachi 3:16. These were the dark days preceding the birth of Christ, comparable to the last days before the Lord returns. “Then they that feared the Lord spake often one to another; and the Lord hearkened, and heard it, and a book of remembrance was written before him for them that feared the Lord, and that thought upon his name.”

One more instance from the New Testament. Peter was in prison, awaiting his execution by the cruel hand of Herod. “But prayer was made without ceasing of the church unto God for him.” Now it is very well possible that the church had poured out its soul to God, asking that Peter’s life might be spared, since he seemed so sorely needed by the church. But as the time of his execution drew near, and Peter was still in prison, the church no longer pleaded for his deliverance, but rather that he receive grace to be faithful unto death in submission to God’s will. Their prayer was heard, for Peter was sound asleep at the eve of his expected execution, and the church could not believe their ears when they heard that Peter stood at the gate.

Surely the prayer of the righteous availeth much, is very powerful. For God uses the channel of prayer to bless His people. True prayer is aroused in us by the Spirit, is communion with God, self surrender to His will, and child-like trust that He is the Potter and we are the clay which He is preparing through suffering for eternity. In that confidence we have peace with God and the assurance that we are always heard by our heavenly Father through our Lord Jesus Christ. 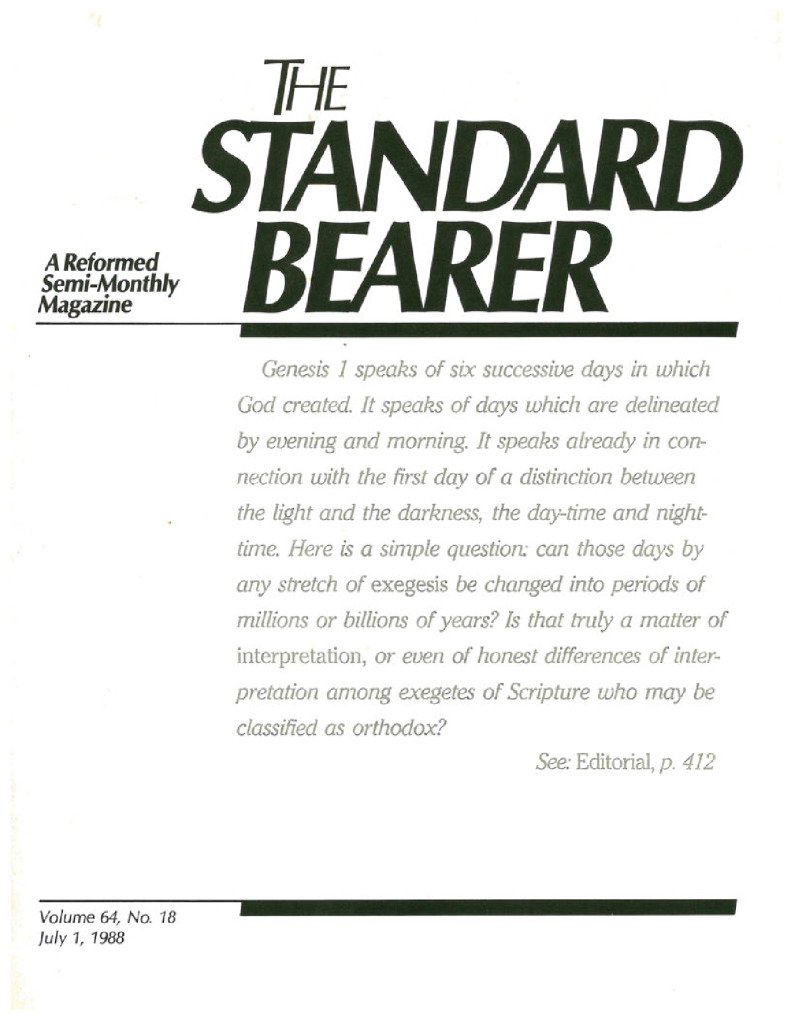