The Place of Laity in Missions (7): Families Moving to a Mission Field

The Place of Laity in Missions (7): Families Moving to a Mission Field

In the last several articles we have raised the idea of whether some families of established churches of a denomination ought to consider moving to a mission field. We studied the biblical and historical precedent that reveals that families of the church did this in the past. It was, in fact, a powerful means Christ used to build His church in the world.

The suggestion of families or individuals moving to and becoming a part of the life of a mission does not mean that every family ought to make this a consideration. To be sure, this would not happen even if pressure were applied to families to do so! Neither is the question raised in order to give a way of escape for families that are being hounded in their own congregations for ungodly living. Families of this sort would be a detriment to the work of a mission.

The question is raised because of the wonderful advantage godly families or individuals from established churches would lend to the labors of a mission. We will write of these advantages in another article. In this article we first wish to address a number of important concerns raised against families moving to a mission field. These concerns are not raised by people who show no interest in missions or who search for opportunities to stymie the work of missions. These are legitimate concerns that need an answer.

Here is the first concern: Is it right for members of the instituted church to “leave” their church in order to join themselves to a small group of believers who are not (and maybe never will be) an instituted church? By stepping out of the instituted church into a mission field, members remove themselves from the rule of Christ over them through the elders. They leave the place where the sacraments are administered for the confirming and strengthening of faith. They leave the communion of the saints. Is not this a spiritual step backwards? Will this not ultimately lead to the spiritual downfall of such a family or individual?

To answer this concern requires a proper understanding of mission work. From our earliest history, the Protestant Reformed Churches have insisted that the work of missions is a work of Christ through the instituted church. Rev. Herman Hoeksema, in a short syllabus on the Principles of Missions, writes on page 22,

But what I want to emphasize in this connection is that the church is not called in general, but only through the official ministry, to preach the gospel. Ambassadors are called. And they are called by the church. They are called to the ministry of the Word. And by the same church they are sent to the mission field.

This means that the church institute does the work of missions. That work is carried on through the offices of the church. In the June 1932 minutes of the combined consistories of the PRC it was stated:

This task (missions—W.B.) must be carried out by the church…through her offices which Christ has instituted in His church…. We are dealing with the official labor and the official calling of the church…. The work of missions must be regarded as official ministry, and this must be performed by the church.¹

Neither does a person remove himself from the sacraments of the church. Already when a mission work is in its infant stages, baptism of children and adults can take place. It is true that the Lord’s Supper is not administered until the mission group has revealed spiritual maturity and stability in the Reformed faith. But we believe that the faith of new believers on a mission field can grow and flourish under the preaching before the sacrament of the Lord’s Supper is administered. The Lord’s Supper is a secondary means of grace. It is no different for those members of the instituted church who belong to a mission field. Besides, when families or individual saints of the instituted church join themselves with a mission group, the spiritual maturity and stability of the mission will be accelerated. The sooner this takes place, the sooner the sacrament of the Lord’s Supper can be administered.

The idea of the communion of saints is addressed in the next two concerns that are raised against families moving to a mission field. First: where is the wisdom in a family pulling their children from one of our Protestant Reformed Christian schools and taking them to a place where there is none? Ah, now there is a serious consideration! Any parent who has sent his children to a Protestant Reformed Christian school knows how valuable those schools have been in the lives of his children. Not only are these schools of high academic standards, but they are of high spiritual standards too. Families in the areas of our Christian schools understand the blessing such schools are in the education of their children.

But is it wise to take our children from such a school and go to a place where one is not established? Some years ago, when my children were just starting school, I took a call to serve as missionary on the island of Jamaica. I was told by a few that I was sinning against my children by taking them away from our churches and from our Christian schools. The years spent in Jamaica were some of the most spiritually rewarding years of my life—and my children that remember Jamaica will say the same. They were given a perspective of the church that few children in the confines of the church institute have the privilege of experiencing. There are unique blessings for children too when a family becomes a part of the life and labor of a mission group. Again, we will speak of those advantages in another article.

This is not meant to minimize the value of our Christian schools. But sometimes God gives children a good spiritual education when faced with the realities of being a godly witness to others and the need to defend the faith. To leave the larger area of the communion of saints, to leave places where there are Protestant Reformed schools, is not for everyone. But neither is it necessarily foolish.

One last concern that is often heard is: is it not a denial of the covenant God establishes in our generations to move away from parents, siblings, and fellow saints? We ought to recognize the fallacy in this reasoning. God establishes His covenant of friendship with believers in Christ. God then promises to His church that He will establish His covenant with believers born into their generations too. Nowhere does the Bible teach, however, that God saves these children only when parents remain in a little closed community refusing to spread into other places and lands. It is always interesting to hear the observations of non-hostile people who are outside of our churches looking in. Recently the remark was made by a visitor who is genuinely interested in becoming a part of our Fellowship here in Pittsburgh: “So, how was it possible for a young man from your ‘almost Amish’ churches in Michigan to find your daughter way out here?” There was no malice or reproach in what she was saying. It was merely an observation. Is that really what we look like to others?

On the one hand, that can be taken as a compliment. Our children are looking for believing spouses. The best place to find those spouses is in the church. We well know how many godly marriages have developed out of this principle of God’s Word. On the other hand, the label “almost Amish” gives us a little pinch. Are we so unwilling to give our blessing upon our children when they decide to move elsewhere, perhaps far away from parents, siblings, and friends? Do they deny God’s covenant if they move to a smaller church or a mission field where their presence would be so greatly appreciated and needed? Or does God bless us in our generations only if our children and siblings all live within 25 miles of each other? Are we so governed by sentimentality that we make it impossible to look out for the greater welfare of the church by insisting that we cannot live without family and friends close by?

The communion of saints is much broader than what exists in one area of the country or world. Even as it becomes manifest in the church institute, it is broader than a little confined area of the world. When we leave our church to affiliate with a mission work, then we are expressing that life within the church can be found in a new and different place outside of my safety zone. I can establish friendships with others besides those I have been friends with in the past. I can help in the church by being an active, useful member, where my presence and life make a real difference. And God’s promise remains true that wherever I live He will establish His covenant with my believing children too.

It is true: moving to a mission field is not for everyone. Neither will the need for help in missions convince a large number of us to move. But maybe there are some who are willing to rise up to the challenge that many others have accepted in the history of the church. All that is needed is a few. 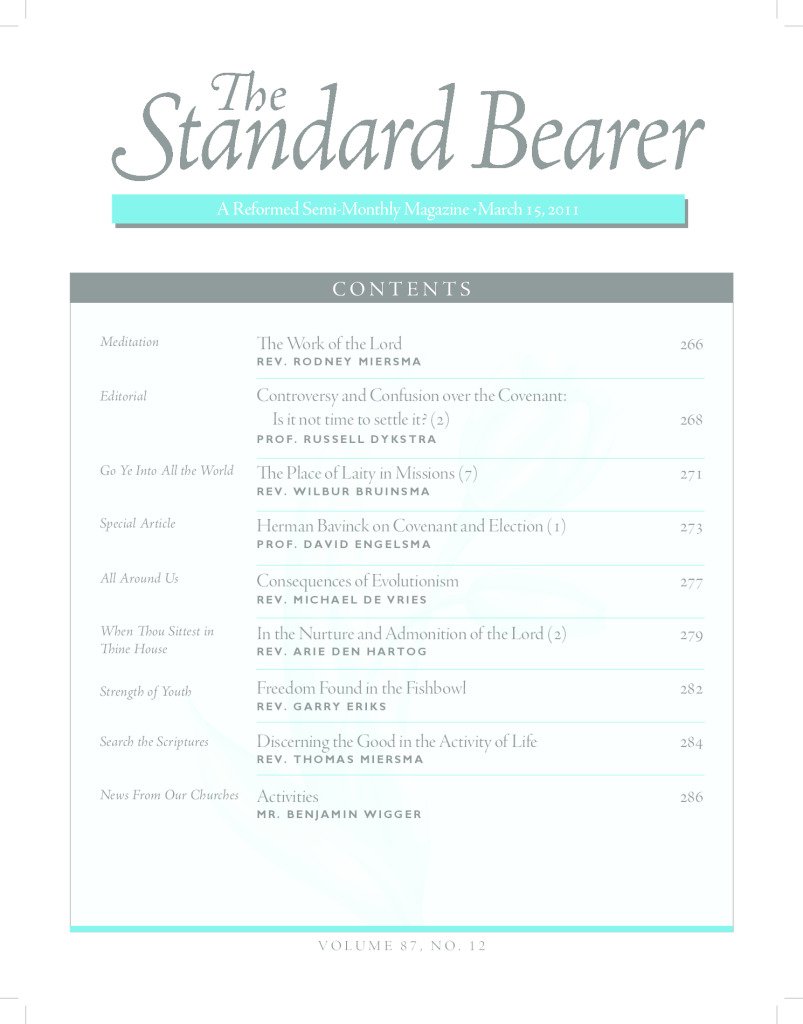