The Pilgrim and Marriage

The Pilgrim and Marriage

The outstanding quality of marriage is that it is an absolutely unbreakable union or bond. That is not a popular truth, but it belongs to a faithful witness and a faithful pilgrim life to state and to live that uncompromisingly and boldly. Marriage is a bond of intimacy between one man and one woman which isfor life, and which has for its purpose the revelation of the salvation of the Church in Christ, and the bringing forth of covenant seed. That marriage is not capable of termination as long as both mates are living is clearly the teaching of Scripture. I say Scripture teaches this clearly: we must disagree completely with those who say “no substantial and conclusive evidence can be produced” to the contrary. The Scriptural data is overwhelming. If you read your Bible honestly and in submission to it, without looking for something you are trying to find, you will have to agree. The first three verses of Romans seven teach that death of one of the mates is the only way in which marriage can be terminated. Jesus states in Matthew nineteen and Mark ten, “What therefore God hath joined together, let not man put asunder.” Man is not able to undo a work of God, nor may he try. In a passage that is echoed in Mark ten, Luke sixteen, verse eighteen, states: “Whosoever putteth away his wife, and marrieth another, committeth adultery: and whosoever marrieth her that is put away from her husband committeth adultery.” I save reference to Matthew nineteen, verse nine, until last for several reasons: this passage has puzzled some, this passage is appealed to most by those who advocate remarriage of divorced persons, and finally it must be understood in the light of those passages previously mentioned.

The words are very similar, yet there is one additional phrase: “And I say unto you, Whosoever shall put away his wife, except it be for fornication, and shall marry another, committeth adultery: and whosoever marrieth her which is put away doth commit adultery.” The added phrase is: except it be for fornication. But do you really think that phrase is going to overturn what a dozen other passages clearly teach? Does one book of the Bible violate another? Is it not rather the truth that there is an explanation of this phrase that will allow all the other passages to stand intact, in all their power? The words “except it be for fornication” do not modify the following phrase “and shall marry another,” as if the fornication of a wife allows the man (the innocent party) to marry again; but they go with and modify the beginning part of verse nine which speaks of putting away a wife! Thus the intent of Jesus is that a wife may not be put away for every reason, but only for the ground of unfaithfulness or fornication. So the sum of the matter is: put away, or live in separation from your marriage mate only rarely and then only for the cause of fornication. But in no case may either the husband or the wife, the innocent or the guilty party, remarry. That would constitute adultery; and adultery is also committed if a third party comes along and marries either of them. No man and no church can change that!

Eunuchs for the Kingdom’s Sake

The disciples did not miss the importance of Jesus’ words. They considered it a hard saying. They said, “If the case of the man be so with his wife, it is not good to marry!” Or, if a man can never rid himself of a wife, even if she be a poor cook and housekeeper, a nagger and a bickerer, a poor mother and a boring companion . . . then it is better not to marry, and thus run the risk of spending a lifetime with such a person. And of course, in the disciples thinking a woman would be running an equal risk. At this point Jesus introduces the subject of eunuchs; some are eunuchs by birth, some by the hands of men, and some have made themselves eunuchs for the kingdom of heaven’s sake. The context makes clear that Jesus is saying that a man or a woman who has been put away by his mate, or who has put his mate away, must become a eunuch for the kingdom’s sake; that is, this person does not remarry, but learns to live without a mate in the kitchen, living room, and bedroom.

Now the Church of Christ, and the pilgrim husbands and wives within her, must be faithful to these words if she is going to reveal that she is the Bride of Christ. For the reason that marriage is an unbreakable bond is to be found in the fact that the Church can never be separated from her Savior! Christ will never leave those for Whom He died. He loved them unto death! And Christ will not even allow His people to forsake Him, even though they sin and commit adultery; rather He brings them to confession of their vile sins, forgives them, and leads them in a new way! To allow the remarriage of separated, or what the world calls divorced persons, is a practical error that finds its way, cancerously, into the very doctrine of the church. For first of all, the fellowship of pilgrims called church denies, when it allows such remarriage, that her salvation is an everlasting certainty in Christ, and that the bond between Christ and the Bride is of such a permanent nature that the gates of hell cannot destroy it. Man might not like that, but he cannot have it both ways: the picture and the reality must correspond. If one is enduring and firm, so is the other; if the picture is breakable and flimsy, so is the reality.

In the second place, if adultery in the physical sense is allowed in the church and-at the communion table, then be sure that all kinds of other iniquitous practices will soon follow. This is observable in the churches today. Those who have left the Scriptural truth concerning marriage are those who also fall away in other areas of doctrine. Doctrine and life become corrupt simultaneously because the truth is one. I fear that the reasons for this carnal inroad into the life of the church are basically two. The church has become a man-pleaser rather than a God-pleaser. She does not want to seem old fashioned, too traditional or unchanging, nor has she any taste for discipline. There must be room for a little bending and a lot of tolerance. Secondly, there is an improper stress placed on the importance of the here and now, as if the present time and circumstance is all there is!“Do you mean to tell me,” one deserted wife wailed to me, “that God wants me to live the rest of my life without a husband and my children without a father, just because I picked a bummer?” When I assured her that was the will of God for her according to the Scriptures, her response was that she knew what the Bible said but she did not believe it! Well, it was not given her to receive, but the answer is still Yes. And God will take care of the deserted wives and the fatherless children in His tender mercies. The answer is Yes also because God has something far better in mind for His people than earthly marriage, He will give them a place at the everlasting wedding feast!

In conclusion, a few practical remarks ought to be made so that the pilgrim may be encouraged in marriage faithfulness. To hold fast to this doctrine, both in our walk and conversation, will cause a certain amount of suffering. Generally, the child of God who holds unwaveringly to the Word of God encounters reviling and mocking. It is no different when He maintains the Biblical view of marriage. As you testify to this truth in your wedded life but also from time to time verbally, you will experience rage and scorn. Do not be surprised and do not fear. Also, a very few pilgrims may find it necessary to live as eunuchs for God’s sake. That will entail loneliness, grief, and temptation of the highest magnitude. But God will not forsake you. He will supply all your needs in Christ Jesus!

Secondly, since no one is capable in himself of fulfilling the demands of the wedded state so that in his marriage the perfect union of Christ and Church is revealed, and’ since no one is even beyond the committing of the sin of adultery, the calling is urgent that husband and wife really live togetherand pray together. Husbands, take the lead in discussing your marriage with your wife. Study the Scriptures together on the topics of marriage, home, and children. Admit your failings one to another. Confess your sins, and forgive one another even as God has forgiven your sins in Christ Here is the reason that a husband or a wife must put away his mate so seldomly. They have learned to forgive again and again!

Thirdly, there is much room for the giving of instruction concerning marriage to older children and teenagers in the home. Since marriage is a sacred institution of God, since no man may put asunder what God has joined together, then marriage is not something that just happens, or into which two young people simply fall. Let it be understood that dating is courting. Look for a suitable mate when you date, otherwise there is no need to date. And when you look for a mate, know what you are looking for! Look carefully for a fellow pilgrim, look for a Reformed pilgrim, and look for such a mate, ideally, in your own church if you value and esteem marriage. Here, too, it will not do to yoke one’s self together with an unbeliever because it will be a heavy yoke if you do, and it will be a yoke that is with you until death! We could wish that parents would show a little more interest in, and know a little more about, the nocturnal habits of their children.

The faithful pilgrim receives a great benefit when his marriage is a true reflection of Christ’s. As saints, husband and wife have the closest possible communion of the saints. They know one another more intimately than any other person alive. They are acquainted with each other’s fears and doubts, hopes and aspirations, weaknesses and strengths. Dwelling together there is opportunity to speak of spiritual things, to warn in love, to give of self, to encourage on the long journey. And on that journey towards heaven, the pilgrim may carry with him in his marriage, and thus in his very bosom, the assurance that he shall reach his destination. Just as surely as a Christian husband and wife can clasp each other in their arms, so surely can they know that they shall one day see Christ! For marriage speaks of the love and faithfulness of Christ, Who gave Himself unto death, and Who will never, never forsake His Bride! All the way to heaven is heaven, because Christ is the Way. And all those on that way shall never be separated from Him! 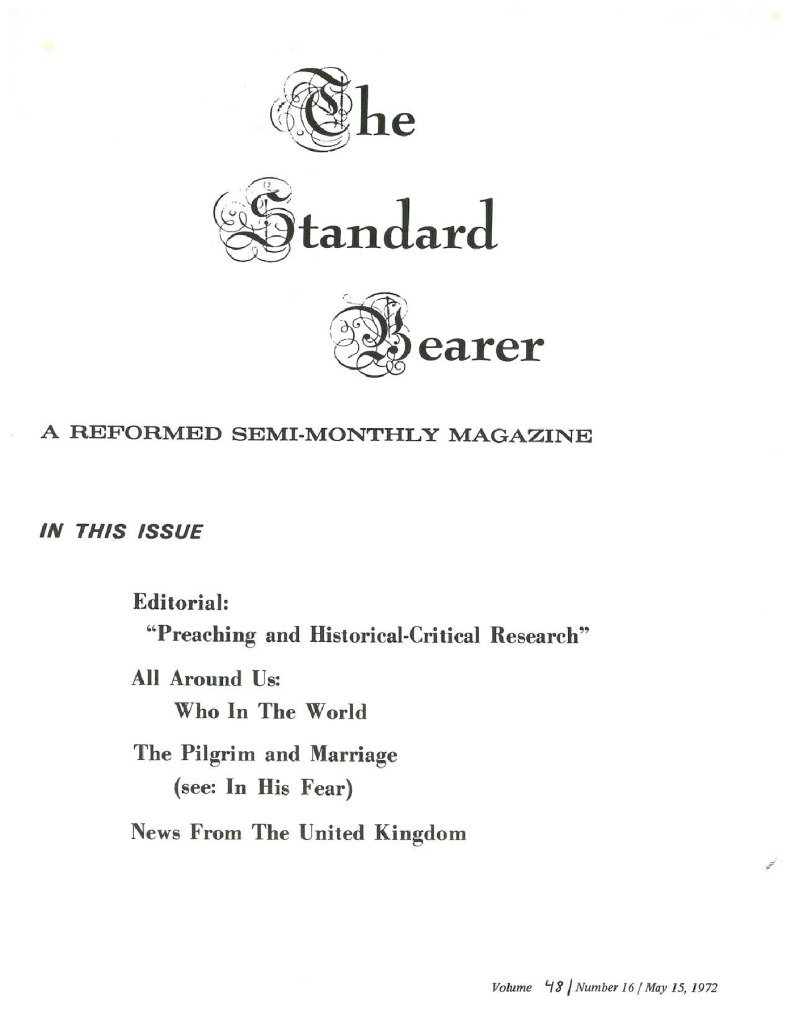