The Perfection of Christ’s Death

The Perfection of Christ’s Death

The subject of “Limited” or “Definite” Atonement is often the most controversial of the Five Points of Calvinism. The differences between the Calvinist and the Arminian, even on the subject of predestination come into sharpest focus at this point. Even many so-called Calvinists, who agree with us on the doctrine of sovereign, unconditional, double predestination, will disagree violently with us when we teach that Christ did not die for all, but for a “definite” or “limited” number of persons. They claim that Christ Himself did not teach definite atonement, and they attempt, though rather inconsistently, to be “Four-Point Calvinists,” differing from historic Calvinism at this point only.

In a certain sense, of course, even the Arminian teaches a “limited” atonement, or at least a “limited” salvation. He, too, believes that some only are brought to heaven and enjoy the eternal bliss of the saints. Universalism teaches both that Christ died for all men, and that all men are actually and finally saved. But there are few, even among the opponents of definite atonement who are willing to go to this extreme in their teaching. They teach that Christ died for all men, but that not all men are actually saved.

There are, then, two points at which the opponents of definite atonement are at odds with us. They differ first of all with regard to the “limitation.” We believe that the atonement is limited by the will and good pleasure of the Father and that Christ died only for those whom the Father gave Him, that is, for the elect (Canons II, 8). The Arminian teaches that, from the viewpoint of God’s intention, the atonement is unlimited, that it was the good pleasure and will of the Father that Christ die for all men. Nor does he believe that atonement is limited by the cross; Christ gave His life as a ransom for every man, without exception. Rather, the opponents of definite atonement believe that it is the will of man which limits the atonement. Christ died for all, but the sinner’s response to the work of Christ determines whether or not he shall be saved.

This is, obviously, a key point. If God’s good pleasure is limited by the will of the sinner, and if God’s will is frustrated by the decision of the sinner, then not God but the sinner is sovereign in salvation. That certainly is a notion that the Calvinist abominates, especially when he reads in the Scriptures that God’s counsel standsand that He does all His good pleasure (Is. 46:10). God is sovereign also at the cross.

Nevertheless, we must see that those who oppose the idea of “definite” atonement deny not only the sovereignty of God in salvation, but also the perfection of Christ’s work on the cross. They have an entirely different view of the nature of the work of Christ. They deny that the atonement is limited, but they also deny that it is “atonement.” The Calvinist believes that through the work of Christ he is “at one” with God. Isaiah says that it is our sins which separate us from God (59:2) and therefore when Christ provides redemption from sin He gives us peace with God. The idea of a general atonement clearly contradicts this for it teaches that although Christ died for every man, yet there are many who are not eternally “at one” with the Father.

The Arminian does this with all the words that Scripture uses in connection with the death of Christ: redemption, propitiation, ransom, satisfaction, forgiveness, etc. Though he may use these words, nonetheless he turns them on their heads and empties them of all their meaning. The word satisfaction is another good example. It is a word which is used in all three of our creeds, and which Scripture also used (Isaiah 53:11). The word means “to do enough” and when we say that Christ’s death provides satisfaction we mean that Christ “did enough” to fulfill the demands of God’s law for us, to deliver us from the curse of the law, and to obtain for us righteousness and eternal lie. About the work of Christ the Arminian says, “not enough.” Christ cannot have satisfied, for there are many who do not obtain eternal life, though Christ’s blood was shed for them.

There are then only two alternatives: either Christ saves those for whom He dies or Christ is not a Savior. But, if Christ is not a Savior, then the angel lied to Joseph and to the church of all ages when he announced the birth of Jesus with the words, “He shall be called Jesus for He shall save His people from their sins.” Yea, the very name that God gives Him is a lie, for His work does not measure up to the glorious name “Savior” which is given Him by God.

That correspondence between Christ’s work and its fruit is also taught in Luke 19:10 where Jesus says, “For the Son of Man is come to seek and to save that which was lost.” Notice here that those whom He seeks and those whom He saves are the very same persons. He does not seek all the lost and save some. He seeks and saves the lost. And that the lost and the elect are the same limited number of persons whom Jesus seeks and saves is evident from John 6:37: “All that the Father giveth Me shall come to Me, and him that cometh to Me I will in no wise cast out”; and from Matthew 9:12, 13, where Jesus teaches that “the lost” are those who by the grace of God know their lost estate. His seeking corresponds to God’s choosing, and His saving is in perfect harmony with the Father’s “drawing” so that in the end Jesus can say, “those that Thou gavest Me I have kept, and none of them is lost.” And this He says, as it were, in the very shadow of the cross (John 17:11).

Our creeds also teach the truth of limited or definite atonement—Lord’s Day VII, 20, of the Heidelberg Catechism; the Belgic Confession, XVI, XXII; Canons II, 8. Nevertheless, in connection with the error of a general atonement, there are those who lay hold of Canons II, 3 in a desperate attempt to prove their doctrine. This article of the Canons reads:

The death of the Son of God is the only and most perfect sacrifice and satisfaction for sin; and is of infinite worth and value, abundantly sufficient to expiate the sins of the whole world.

We may notice, first of all, in connection with this article that whatever it says, it does not teach a general atonement. It does not say that the sacrifice of the Son of God actually does expiate for the sins of the whole world. It does not even say that it was God’s intention that it should so expiate for all. Then Canons II, 3 would contradict Canons II, 8 which says:

For this was the sovereign counsel, and most gracious will and purpose of God the Father, that the quickening and saving efficacy of the most precious death of His son should extend to all the elect . . . that is, it was the will of God, that Christ by the blood of the cross . . . should effectually redeem out of every people, tribe, nation, and language, all those, and those only, who were from eternity chosen to salvation, and given to Him by the Father . . .

Article 3 does not contradict this, but simply attempts to show what Article 6 teaches, that, “whereas many who are called by the gospel, do not repent, nor believe in Christ, but perish in unbelief; this is not owing to any defect or insufficiency in the sacrifice offered by Christ upon the cross. . . .”

The Arminian argument at the Synod of Dordt was that the doctrine of definite atonement limits the value of Christ’s death. The Canons teach in Article 3 and in Article 4 that the death of Christ is very precious, but that this value of the death of Christ is not determined by the number of those who profit from His death, but by the fact that it was “the death of the Son of God,” and that “it was attended with a sense of wrath and curse of God due to us for sin” (Canons II, 4).

Really, it is the Arminian doctrine of universal atonement which denies the value of the death of Christ. For, according to this error, the blood of Christ was shed in vain for many, and certainly then is not all that valuable to those who are saved for it is not the only ground and foundation of their salvation. The Canons point this out in II, B, 3 where the Fathers say that not they but the Arminians “judge too contemptuously of the death of Christ, and do in no wise acknowledge the most important fruit or benefit thereby gained (the benefit of satisfaction for sin).” Thus too the Fathers said that the error of the Arminians was “out of hell.” And what a terrible thing it is when the judgment of hell concerning the death of Christ is taught in the church. The Heidelberg Catechism says,

Though they boast of Him in words, yet in deeds they deny Jesus the only Deliverer and Savior; for one of two things must be true, that either Jesus is not a complete Savior; or that they, who by a true faith receive this Savior, must find in Him all things necessary to their salvation. (Lord’s Day XI, 30).

So also this doctrine of a general atonement “tends to the despising of the wisdom of the Father (Canons II, B, 1)” Who gave His only begotten Son on the mere chance that some might be saved through His bitter suffering and death.

And how clearly do the “deeds” of the Arminians show that they deny the perfection of Christ’s work. The preaching of the Arminian degenerates into mere begging—the minister begging those who hear to exercise their will and come to Jesus Who has a wonderful plan for their lives, if only they will accept Him. In his mission work, he goes not where and when a sovereign God sends, in the confidence that according to the good pleasure of God that sending shall bear fruit, but he scurries hither and thither desperately trying to bring his “gospel” to all, that all may have their chance to profit from Christ. In all his preaching and teaching he slanders the Son of God and blasphemes the name of Jehovah.

The atonement is perfect because God Himself is perfect. We may be sure that He will not allow the costly death of His Son to be a failure, nor His precious blood to be shed in vain.

It may sound sweet to sinful ears to proclaim and teach a general atonement, but such teaching destroys the Gospel of our Lord Jesus Christ, the Gospel of the glory of God. So also it destroys the comfort that we have in the cross, for we believe that the blood of Jesus is the only thing that stands between us and eternal fire; and if the blood of Jesus is not sufficient to save me from the fire, then what in all the world is? May we with the Apostle Paul determine that we shall know nothing else in the church but Christ, the Son of God, crucified as a full atonement for the sins of those who were given Him by the Father. 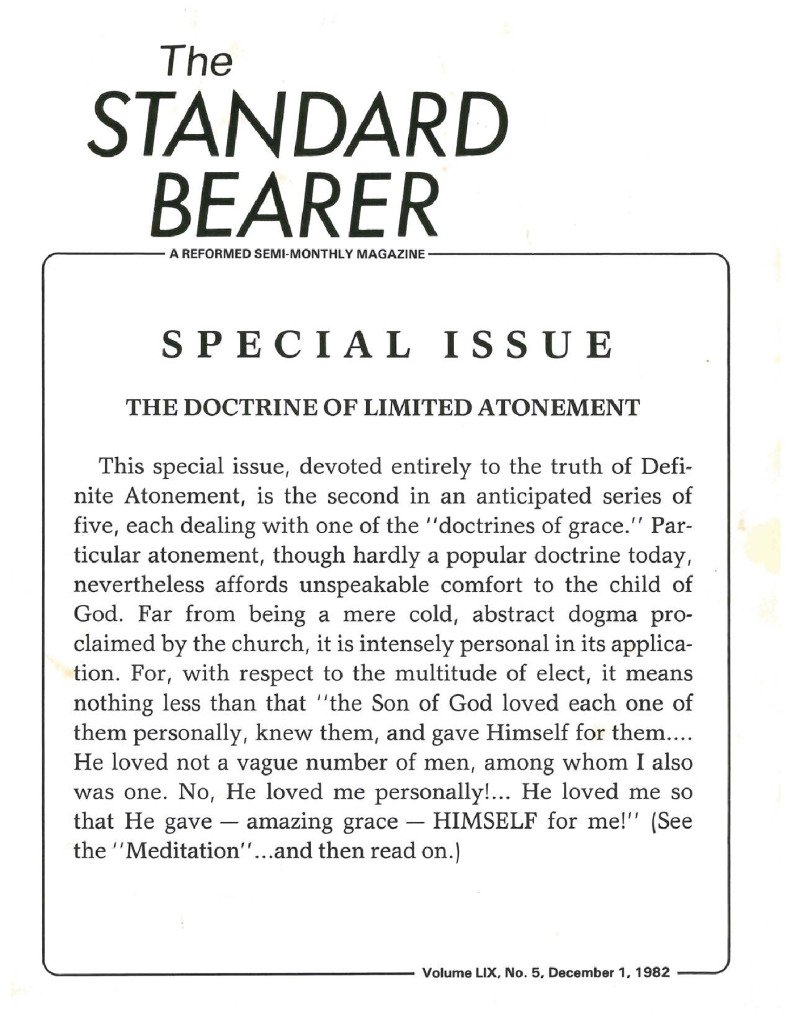