The Parable of the Wicked Husbandmen

The Parable of the Wicked Husbandmen

“But last of all he sent unto them his son, saying, They will reverence my son. But when the husbandmen saw the son, they said among themselves, This is the heir; come, let us kill him, and let us seize on his inheritance. And they caught him, and cast him out of the vineyard, and slew him. When the lord therefore of the vineyard cometh, what will he do unto those husbandmen?”

Matthew 21:37-40The parable of the wicked husbandmen illustrates the wickedness of the Jews, who rejected Jesus Christ, the Son of God, out of their own selfish ambition. Despite the Jews’ opposition to and hatred of God, and despite the raging of the world at large, Christ would yet have the victory.

Jesus introduces the parable by telling of a householder who carefully prepared his vineyard. He planted it, fenced it, built a winepress for it, and even built a tower to protect it from thieves. Having equipped his vineyard, the householder had the right to its fruits.

The husbandmen who rented the land were sharecroppers, who agreed to work the vineyard in exchange for a portion of the fruits. The other portion, of course, was due to the householder.

The husbandmen in Jesus’ parable are a picture of the Jews, especially the leaders who had been put in charge of God’s vineyard, the Old Testament church. As husbandmen in God’s vineyard, the Jewish leaders had the duty of bringing forth fruit unto God. They had been given much. They were given positions of authority in the church. They had God’s written word, which foretold the coming of the Messiah. More than that, they heard the words and saw the mighty works of Jesus Christ Himself, which words and works proved that He was the promised Messiah.

Having received much, much was expected of them. As husbandmen in God’s vineyard, they should have brought forth fruit to God. As shepherds in Israel, the Jewish leaders should have taught the glorious truth concerning Jesus the Messiah; instead they rejected Him. They should have been ushering people into the kingdom; instead they barred the doors. They should have been calling the people to repentance and faith; instead they themselves were hardened in their unbelief. John the Baptist berated them exactly because they were not bringing forth fruit. “But when he saw many of the Pharisees and Sadducees come to his baptism, he said unto them, O generation of vipers, who hath warned you to flee from the wrath to come? Bring forth therefore fruits meet for repentance” (Matt. 3:7-8). John the Baptist was preparing the way for the very Messiah; but they rejected him.

The Lord of the church justly requires fruit from His church. As those who have graciously been brought into the church, we have received much from God. Therefore, we owe it to Him to live lives that are pleasing to Him, to bring forth fruit to the glory and honor of His name.

Though Jehovah looked for fruit from His vineyard (cf. Is. 5:1-3), the Jews would not submit themselves to Him.

When the householder sent his servants to collect his proper share of the produce, the husbandmen wickedly rejected them. One they beat, another they killed, another they stoned. Others followed and were rejected too. Their ongoing rebellion proved that their rejection was deliberate and hateful. So much so that one wonders at the patience of the householder. One would think he would have thrown out the wicked husbandmen long ago.

The husbandmen’s contempt for the householder was undeniable when finally they killed his “one son, his wellbeloved” (cf. Mark 12:6). “But when the husbandmen saw the son, they said among themselves, This is the heir; come, let us kill him, and let us seize on his inheritance” (Matt. 21:38). Now the truth could not be denied; everyone hearing the parable understood the extreme wickedness of the husbandmen.

Such was the Jews’ hatred of God and His only begotten Son. They did not merely ignore or dislike Him; they hated Him with a passion. Amazingly, they thought that killing Jesus would somehow ensure they would obtain a kingdom for themselves (cf. John 11:47-50).

We might think to ourselves that we would have been different had we lived in those days. But the truth is that, by nature, the way we were in Adam, we would have done the same thing if we had been in those circumstances. In Adam, we have all gone out of the way and rejected God. By nature, we were all wicked husbandmen who would establish a kingdom apart from God.

The wicked husbandmen in Israel would reap what they sowed. They had ignored the fact that the lord of the vineyard would surely render to them according to their deeds. So many today ignore the same truth as regards their own rejection of Jesus Christ; the judgment day is coming.

When Jesus asked the Jews concerning the fate of the wicked husbandmen, the answer was obvious: “They say unto him, He will miserably destroy those wicked men, and will let out his vineyard unto other husbandmen, which shall render him the fruits in their seasons” (Matt. 21:41). In their answer, the Jews condemned themselves. Just as the lord of the vineyard would miserably destroy those wicked husbandmen, so too would God punish the wicked nation of Israel.

“Therefore say I unto you, The kingdom of God shall be taken from you, and given to a nation bringing forth the fruits thereof. And whosoever shall fall on this stone shall be broken: but on whomsoever it shall fall, it will grind him to powder” (Matt. 21:43-44). Whoever falls upon the cornerstone in contempt and unbelief, proudly exalting themselves, thus attempting to make the cornerstone fit their idea of a kingdom, will be broken. The cornerstone will remain intact, while they will be smashed like a clay pot falling upon a great stone slab. Even worse, those upon whom Christ falls in judgment will be ground into dust and blown away like chaff. “Moreover the multitude of thy strangers shall be like small dust, and the multitude of the terrible ones shall be as chaff that passeth away: yea, it shall be at an instant suddenly” (Is. 29:5). Ultimately, all those who reject Jesus must suffer the torments of hell for eternity.

More importantly, God would also bring a glorious result out of that wicked rejection.

In spite of—indeed, through—the very actions of the wicked husbandmen in Israel, God would accomplish a wonderful salvation. The wicked may rage, but God’s kingdom will prosper all the same and become a glorious kingdom. That is the explanation Jesus gives at the end of the parable: “Jesus saith unto them, Did ye never read in the scriptures, The stone which the builders rejected, the same is become the head of the corner: this is the Lord’s doing, and it is marvellous in our eyes?” (Matt. 21:42). Quoting from Psalm 118, Jesus referred it to Himself. He was the true Israel, the prince of God, who would be highly exalted.

Jesus Christ would be rejected and crucified by wicked hands and laid in a grave. But God raised Him up from the dead and has set Him as the cornerstone of the living temple that God is building. Even though we were part of the rebellious mass of sinners, God has graciously made us part of His spiritual house. “To whom coming, as unto a living stone, disallowed indeed of men, but chosen of God, and precious, Ye also, as lively stones, are built up a spiritual house, an holy priesthood, to offer up spiritual sacrifices, acceptable to God by Jesus Christ. Wherefore also it is contained in the scripture, Behold, I lay in Sion a chief corner stone, elect, precious: and he that believeth on him shall not be confounded” (I Pet. 2:4-6).

Such is the glorious result of a wicked rejection. Even today, God takes rebels who by nature reject Him; He convicts them of their sins; He makes them part of His glorious temple; and then He causes them to bring forth fruit unto Him.

No matter what forces gather themselves together against God and His anointed one, their evil plans will not prosper. Though apostasy abounds in the church world today, many churches rejecting God’s only begotten Son, yet Christ will prevail. He will establish His kingdom, using even the rejection of men to accomplish His plan. 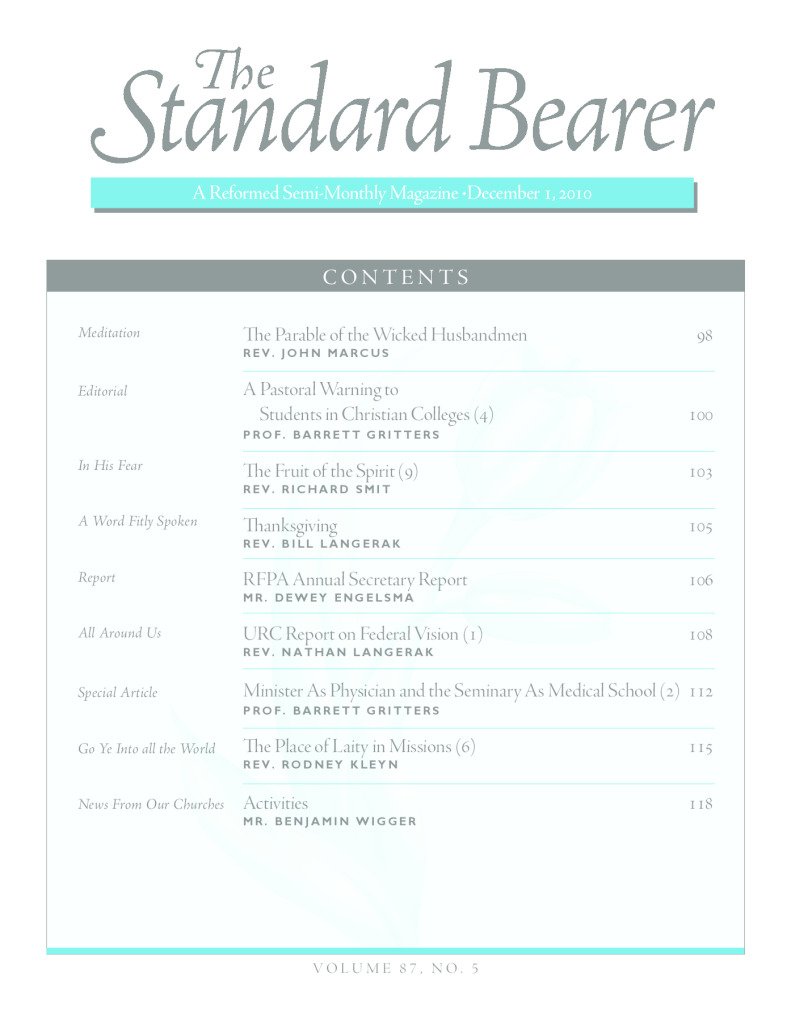