The Organic Character of Preaching in the Sphere of the Covenant

The Organic Character of Preaching in the Sphere of the Covenant

No church exists merely on the basis of rejection or negatives. It is not simply our rejection of the theory of common grace, or of the general offer of the gospel, or of the conditional or Heynsian view of the covenant, which binds us together as churches. Rather, it is the positive principle of the organic character of God’s sovereign grace and covenant. It is this which shapes our preaching in the sphere of the covenant.

What is meant by that term organic? That term today tends to convey the idea of something which is physical, such as organic gardening. Indeed the term does draw a picture from the realm of the physical creation of a fundamental spiritual reality, though the reality which it pictures is spiritual, not physical. The term refers to a living unity such as a vine, a tree, or human body, as opposed to a mechanical or artificial unity, such as an automobile or other mechanical device. Just as a living creature, an organism, is more than a machine, with a higher unity and a richer oneness than a merely mechanical combination of parts, so that it has one life uniting all its parts and so that it grows and develops, so also the work of God is an organic unity. Such is preaching in the sphere of the covenant. It is organic in character.

It is so in the first place because the covenant itself must be conceived of organically. It is not a mechanical and artificial contractual arrangement or agreement, but the living communion and fellowship of God with His elect, established in Christ. It is a relationship of fellowship and friendship, a Father-son relationship in the Son, Jesus Christ, and through the Spirit of adoption. The elect, as they stand in the counsel of God’s covenant and as they are gathered in time, are not a mere collection of individuals or mechanical parts, arbitrarily chosen, but a church, thebody of Christ having design and purpose, in which each individual elect child of God is a living member. That covenant household manifests itself as the body of Christ in the world, the gathering of elect believers and their elect seed, having one center and one head from which her life flows, Jesus Christ. That church is known only by faith, for it is a spiritual reality and cannot be seen with the physical eye.

In its visible manifestation as the church institute, that organism includes within it a carnal seed. These are the hypocrites and reprobate who, like dead branches, appear on the vine and are mixed with the church. Though outwardly included in the sphere or environment of the church, they have no part in her true life, drawing no goodness or grace from the vine. It is to that church that the Word of the gospel comes organically, addressing it as it exists in the world.

The preaching of the gospel must necessarily partake of that organic character of God’s work, for its content is the Word of God. That Word of God is itself an organic unity, the one Word and revelation of God in Jesus Christ. The Scriptures are not a mechanical unity, but are the organic, living revelation of God as the God of His covenant in the face of Jesus Christ. That Word is addressed to the church through the preaching as the chief means of grace.

That Word of the gospel is necessarily particular; it is not grace for all. In harmony with the organic character of the church and the preaching, the sound of that gospel does indeed reach the ears of all that hear in the sphere of the covenant, coming with the command to repent and believe, but the promise of salvation is particular and unconditional, for the elect alone, who by their union with Christ in eternity and time are Christ’s body. By that preaching the vine is nourished and built up and branches are grafted in. It is also a savor of death unto death to the reprobate, for by it dead branches are also pruned away, for, being particular, the preaching must also be distinctive and antithetical.

In the second place the preaching partakes of the organic character of God’s work because by it there is growth and development. The preaching of the word must edify. That term organic emphasizes not only the living unity of God’s work, but, as in a living creature there is always growth and development, so also under the preaching of the Word there is an organic fruit to that preaching. By it the church and covenant of God grow and develop. The elect are gathered in the generations of God’s people, and through the work of missions new branches are grafted in.

In the same way in the life of the individual elect child of God there is an organic work of God in connection with the body of Christ and the preaching of the Word. In the work of grace in salvation, we make a logical distinction in the application of the cross of Jesus Christ to His elect and speak of that order as being immediate regeneration or union with Christ, saving calling through the preaching, conscious faith and conversion, justification, and sanctification. But here also the fruit of God’s grace must not be conceived of as some mechanical process, like climbing steps. It is but a logical description of the one organic work of God by which God establishes His covenant with us. So also the believer’s growth in grace and assurance in his experience is an organic process. God works that grace in connection with the means of grace in harmony with the life of the child of God, so that children of the covenant are normally regenerated in early infancy and grow in the consciousness of their salvation and assurance of election. So also God works that assurance in our hearts, not by fixed, mechanical steps, or mystical conversion experiences, but organically, through growth in grace. This is the norm in the sphere of the covenant and church, even as a more sudden conversion may be found on the mission field.

God’s work is, from beginning to end, organic in character, and such must be the preaching in the sphere of the covenant. Therein lies the error of every attempt to make God’s grace common or general. It is a fundamental denial of the organic character of preaching, of salvation, of the church, and of God’s covenant. For he who would teach that the grace of God is common to all, or offered to all, must conceive of God’s covenant mechanically, and of the church, not as an organism, but as a mere collection of individuals, each receiving the promise. Only thus is it possible to maintain that salvation is offered to each individual upon the condition that he accept or reject it, or to all the baptized. Only then can the promise be made general and objectively for all. The church and covenant then must be divided into those who are half-way and those who are fully in the gracious life of the vine, Jesus Christ. Preaching can no more address the body of Christ organically, but must divide the church into converted and unconverted, believing and unbelieving. The preaching then must approach the congregation as so many individuals thrown together, as marbles in a bag. Preaching becomes individualistic, and the unity of the gospel and of the means of grace are lost. Preaching focuses upon the individual, his faith, his experience, his progress in assurance. The particularity of the promise addressed to the elect as the body of Christ is lost and replaced by the particularity of the individual. Preaching becomes subjective, person-centered.

There is a danger for us in this as Protestant Reformed people. Individualism is a step on the road to Arminianism. The preaching of the gospel in its organic character indeed addresses God’s elect personally and individually, calling them by name, but it does so organically in the context of the body of Christ. The preaching addresses us, not as mere individuals but as the church of which we are personally living members. If then a sermon on the glory of Christ and His church leaves us cold because we do not see how it speaks to us personally, we are in deep trouble. If the preaching of the doctrine of the Scriptures, which is all one in Christ Jesus, and out of which our life flows, leaves us unmoved, we are in, danger, in danger of losing the organic unity of God’s work. If we are discontent with the preaching unless it addresses myfaith, my experience, my emotions, my personal practical walk, then we must examine ourselves, for while the preaching of the gospel surely does all these things, it does so always organically as the church of Christ in the world. Where the spirit of individualism rears its head, Arminianism and mysticism follow, and the organic character of preaching in the sphere of the covenant is lost, and with it, our Reformed heritage. 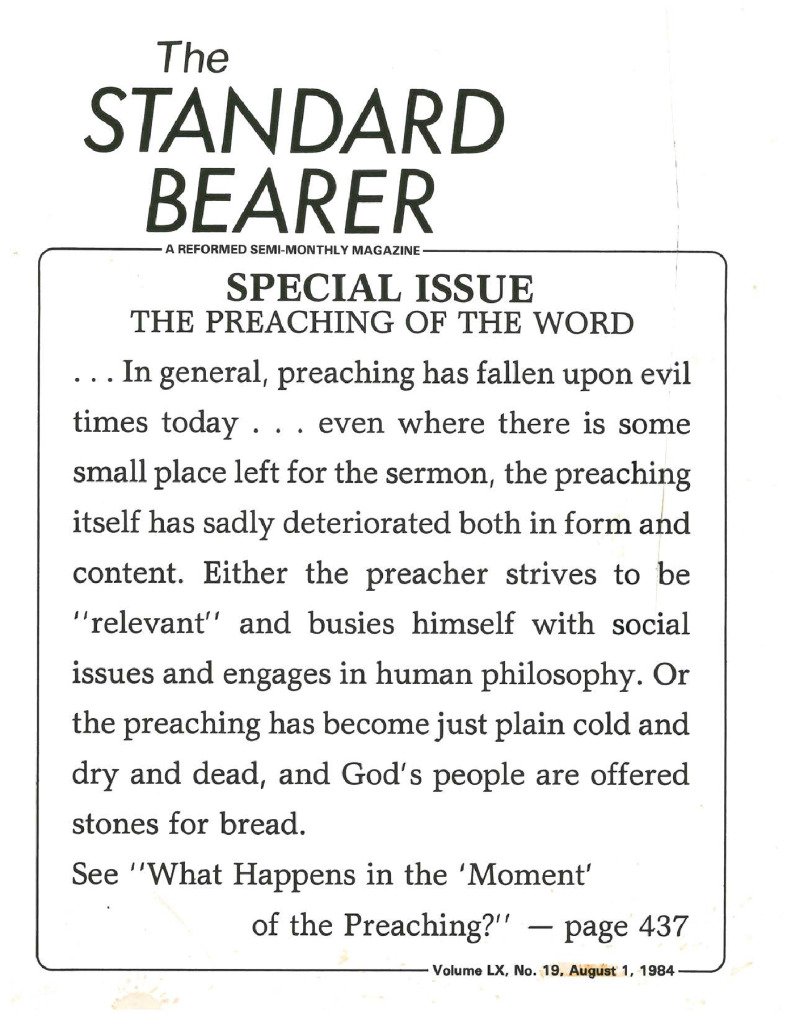