Contrary To The Confessions

In our second installment on this subject (prior to the section in which we made the point concerning basic exegetical method) we pointed out the twin contradictions iti the Murray-Stonehouse pamphlet,The Free Offer of the Gospel. We pointed out that the pamphlet does not only separate between the so-called will of God’s decree and will of God’s command (decretive and preceptive wills, or, secret and revealed wills), but it teaches a flat and impossible contradiction between the two. This position is basic to the whole offer-doctrine of the pamphlet. And, having made this contradiction, the pamphlet then proceeds to forget all about the will of the decree and to busy itself exclusively with the contradictory revealed will.

We have already pointed out that this involves Murray and Stonehouse in a denial of the simplicity of God. At this time we shall not belabor this point further, lest we complicate the entire discussion. There are so many facets to this offer-theology that one runs the risk of being side-tracked from the main issue and of complicating the discussion. Nevertheless, many of these facets are significant, too, and well worth discussing. And perhaps at a later date we can discuss some of them. There is, for example, the fact that the Murray-Stonehouse denial of God’s simple will is in flagrant contradiction of Calvin (who is often incorrectly appealed to and quoted in support of the offer-theology). And there is the subject of the unity of God’s will and of the distinctions between secret and revealed, decretive and preceptive will—a subject well worth studying. There is also the subject of so-called “hyper-Calvinism,” a subject on which the Rev. Engelsma hopes to write in the future under “Taking Heed To The Doctrine.” But for the present we must by-pass some of these subjects or touch on them only incidentally.

The twin contradictions which we found in the introductory section of The Free Offer of the Gospelwere these:

Of the two above statements, our Reformed creeds maintain exclusively the first half of each. The Murray-Stonehouse pamphlet claims to maintain both halves, but in effect teaches only the second half of each.

And the position of the pamphlet flatly contradicts the confessions. This I will demonstrate in the present article. And I will quote especially (for the benefit of Presbyterians), though not exclusively, from the Westminster Confession. My quotations are all taken from the edition published in 1970 by The Publications Committee of the Free Presbyterian Church of Scotland. To avoid confusion I will designate the chapters by Roman numerals and the paragraphs by Arabic numerals.

In Chapter III (Of God’s Eternal Decree), 2 we read:

yet hath He not decreed any thing because He foresaw it as future, or as that which would come to pass upon such conditions.

Murray and Stonehouse are shut up to the position that God is filled with an earnest desire to save all men, except upon the supposed and foreseen condition that they refuse to accept the gospel invitation.

By the decree of God, for the manifestation of His glory, some men and angels

These angels and men, thus predestinated, and foreordained, are particularly and unchangeably designed, and their number so certain and definite, that it cannot be either increased or diminished.

Did God have a sincere desire and was He disposed in His lovingkindness to save those whom He ordained to death? If the decree of reprobation was not motivated by such a desire to save the reprobate, could there be such a desire in God in time and in the proclamation of the gospel? Moreover, the number of the elect and the reprobate is determined by what God decreed from eternity. The acceptance or rejection of the gospel invitation has no effect on this—in fact, has nothing to do with this determination, There are no conditions attached to this determination. How, then, as Presbyterians, can Murray and Stonehouse in their pamphlet maintain a conditional desire on God’s part to save the reprobate?

I must interrupt the discussion at this point, and continue the next time, D.V. But let me conclude by calling your attention to the fact that what is quoted above is indeed the will of God’s decree, but is, according to the Westminster Confession itself, therevealed will of God. Did you notice the Scripture references? These are the official proof-texts which belong with this confession. I furnished only the references, to save space. A full edition of the Westminster Confession quotes all these proofs verbatim. And this means that according to the confession itself, this is revealed truth!

As a footnote to the above, I want to acknowledge receipt of two important booklets on this subject. They are opposite in content, and they came to me from opposite parts of the world. One booklet, The Free Offer of the Gospel is by Pastor Erroll Hulse, of England. It was sent to me by one of our readers for critique. It is sub-titled, “An exposition of common grace and the free invitation of the Gospel.” This booklet not only defends the offer-theology, but endorses the position of the “Marrow” men of Scotland. (Incidentally, our ministers will be receiving copies of this booklet from the same reader-friend who sent it to me. He only wanted to send it to men “who will criticize it.”) The other booklet is an excellent and thorough-going critique of offer-theology published by the Evangelical Presbyterian Church of Tasmania, Australia. The title is: Universalism and the Reformed Churches—A Defence of Calvin’s Calvinism. The position taken in this booklet is very close to ours. To both of these booklets I hope to give detailed attention in the future. I will also try to furnish more information about the Evangelical Presbyterian Church, as soon as I receive some promised information. These brethren are much in agreement with us, and this contact is a promising one. 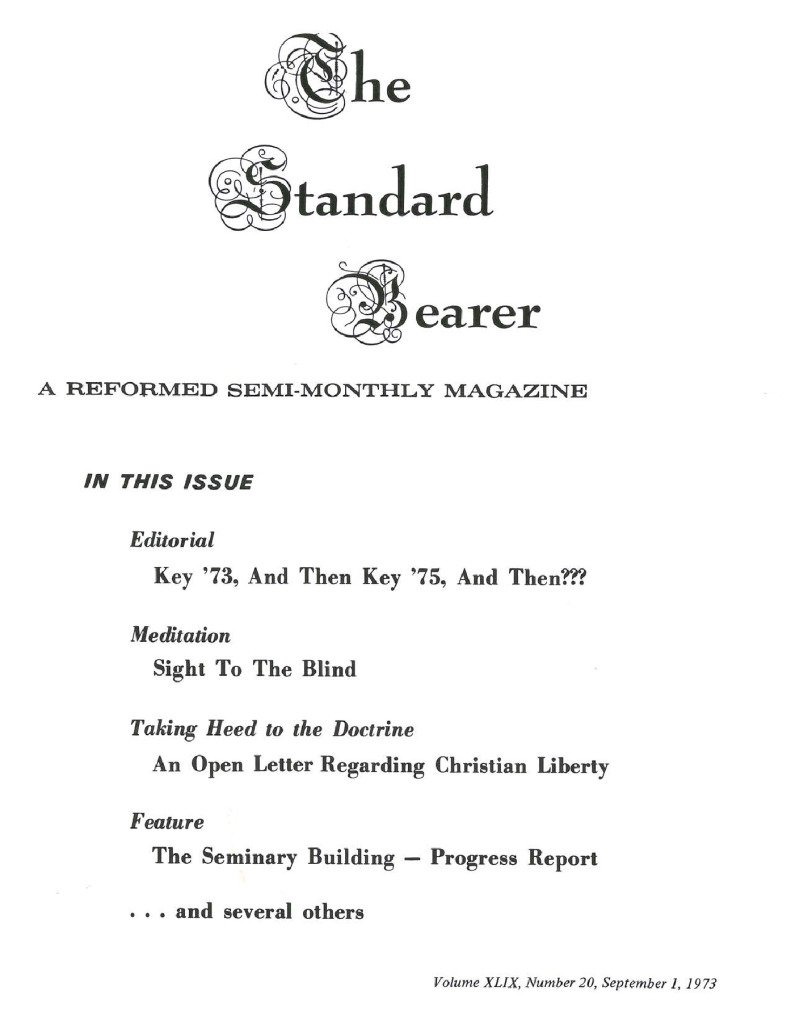