The Offices in the Church of Christ

The Offices in the Church of Christ

“We believe, that the ministers of God’s Word, and the elders and deacons, ought to be chosen to their respective offices by a lawful election by the Church, with calling upon the name of the Lord, and in that order which the Word of God teacheth. Therefore everyone must take heed, not to intrude himself by indecent means, but is bound to wait till it shall please God to call him; that he may have testimony of his calling, and be certain and assured that it is of the Lord. As for the ministers of God’s Word, they have equally the same power and authority wheresoever they are, as they are all ministers of Christ, the only universal Bishop, and the only Head of the Church. Moreover, that this holy ordinance of God may not be violated or slighted, we say that everyone ought to esteem the ministers of God’s Word, and the elders of the Church, very highly for their work’s sake, and be at peace with them without murmuring, strife or contention, as much as possible. ”

It is clearly evident from this Article of the Confessionthat there is no room in the Reformed conception of the offices and government of the Church for either the tyranny of the Romish hierarchy or the license of the Anabaptists. Rome had robbed the believers of their God-given rights and privilege to function in the Church. All right to rule was vested in the hierarchy which was headed by the pope. Priests and bishops lorded it over God’s heritage often ruthlessly and with devastating results spiritually. On the other hand there were the Anabaptists among whom all church organization tended to degenerate into sectarianism. Among them was little regard for “decency and good order.” Anyone who “felt” called to preach went forth at will. The work of these self-styled preachers was revolutionary rather than reformatory in character and resulted in no little dissension among believers. The Reformed Churches in their quest for a Church Polity soundly based upon the Scriptures were at pains to avoid both of these extremes. This in itself explains theConfession’s insistence on the Headship of Christ, the equality of the officebearers, and the necessity of choosing officebearers by a lawful election by the Church.

This lawful election by the church is for the Reformed Churches a very solemn matter. It is that because Christ is the Head and “only universal Bishop of the Church.” Christ is the Prophet Who declares the Word and will of God to the Church. He is the merciful High Priest Who offered Himself as the perfect sacrifice for the sins of God’s people and Who makes continual intercession for them before the throne of grace and Who ministers to the saints in all their needs, As the eternal Ring, Christ graciously rules His saints by His Word and Spirit. But Christ does all this: speaks His prophetic Word, mercifully cares for His saints and governs them through men whom He calls and qualifies and ordains to serve as officebearers in His Church. Furthermore, Christ calls men to these offices through the Church. Christ does not call men mysteriously through some inner light or by speaking directly to them as He did in Bible times. Christ calls through the Church. Therefore, “we believe, that the ministers . . . .and the elders and deacons, ought to be chosen to their respective offices by a lawful election by the Church, with calling upon the name of the Lord. . . .”

That lawful election takes place in one of two ways in the Protestant Reformed Churches which adhere to the Church Order of Dordt. The one way is that the consistory chooses the officebearers and presents them to the congregation for approbation (approval). This may be done with the calling of a minister as well as with the election of elders and deacons. (Cf. Articles 4 and 22 of the Church Order) If no lawful objections are lodged against those selected by the consistory they are installed into their respective offices according to the Forms of Ordination. The other way prescribed by the Church Order (Cf. Article 22) is the one most commonly followed. According to this method the consistory presents a nomination of two or three in the case of the calling of a minister and of double the number needed in the case of the election of elders and deacons. The congregation (all male confessing members in good standing) then elects officebearers from this nomination.

This is very serious and a highly spiritual matter. It must not be supposed that because officebearers are elected by majority vote of the congregation the Church is a democracy. Elders and deacons and ministers do not rule by “the consent of the governed,” but by virtue of the authority of Jesus Christ vested in them. This is precisely why the Confession stipulates that this be done “with calling upon the name of the Lord, and in that order which the Word of God teacheth.” The entire congregation is involved in the election of officebearers, not just as individuals who vote their preferences, but in the office of believer, as those who share in the anointing of Christ and through whom Christ calls men to serve in His Church. That is why the entire process must be in harmony with the Word of God and done in prayer. So seriously did Reformed Churches in Reformation times take this matter that we are told: “In not a few Reformed Churches, notably that shepherded by a Lasco in London, a day of solemn fasting was proclaimed as proper preparation for the work of electing officers.” (P.Y. De Jong, The Church’s Witness To The World, vol. 2, p. 306)

As has been noted the Confession emphasizes that Christ, “the only universal Bishop, and the only Head of the Church” calls men to serve as ministers, elders, and deacons in the Church. What is involved in this calling by Christ? Whom does Christ call? How does Christ call? How may one know whether or not the Lord calls him to office in the Church? Suppose, for example, one is nominated by the consistory for the office of deacon or elder; must he assume that the Lord has given him the necessary qualifications, or may he remove his name from nomination? The answer to all of these questions lies along the following lines. There is first of all the internal or inward call of God. This internal call is especially necessary for ministers of the Word who must of course pursue the calling in the way of college and seminary training. But it is no less necessary with respect to elders and deacons. It must not be supposed that this internal call is some mysterious matter. It is not as if the Lord speaks in some mysterious way, with some kind of sign calling one to office. There are some rather clear, objective criteria by which one may conclude that the Lord. calls him to serve. That internal call consists of the desire to serve God in some office. Certainly God does not call someone without creating that desire for the office. Likewise, one who has no desire to enter the ministry ought not pursue that calling. In the second place, the internal’ call consists of the gifts to serve in that office. One who wishes to enter the ministry must have certain intellectual capabilities to master the college and seminary courses and to preach and teach the Scriptures. One who lacks these but who possesses other capabilities may safely conclude that the Lord calls him elsewhere than the ministry. In addition one must have a gift for public speaking. He must have the gifts of love and compassion for the sheep of Christ. He must be gifted with wisdom and discretion so as to be able gently to lead God’s flock. Where these gifts and more are present in a young man, that man ought seriously and prayerfully to consider whether or not the Lord calls him to the ministry. By the same token, where these gifts are absent that man ought not consider the ministry as his calling. Finally the internal call consists of what may be called an open way. There must be no obstacles in the circumstances of one’s life which prevent one from serving. The way must be clear so that the goal may be reached.

There is as well the external or outward call. This external call is the call which seals and confirms the internal call. This call is the call of Christ Himself through the Church. Thus the Confession warns that no man may appoint himself to any office. Christ alone calls and qualifies and ordains and He does so internally and externally through His Church. No one may intrude upon an office by indecent means. He must be called by Christ. And Christ calls through the Church.

The Confession also speaks of the equality of the ministers. They are all servants of Christ Who is the only universal Bishop and the only Head of the Church. Hence the ministers have the same power and authority and no minister may lord it over others. This the Confession maintains over against the hierarchy of the Roman Catholic Church with its pope, cardinals, bishops, and priests. This certainly means as well that there is an equality of offices in the Church. There is no superiority of the office of the minister over that of the elder or deacon, or of the elder over that of the deacon. They are equally the servants of Christ even though their functions differ.

Finally, the Confession speaks of the calling of believers over against the officebearers. They “ought to esteem the ministers of God’s Word, and the elders of the Church, very highly for their work’s sake, and be at peace with them without murmuring, strife, or contention, as much as possible.” The importance of this cannot be overly stressed. We live in a day of lawlessness and disregard for God-ordained authority. The members of the Church must esteem their officebearers not for their abilities, personality, or good character, but for their work’s sake. They are the servants of the Lord Jesus Christ. They speak the Word of Christ; they rule in the name of Christ; and they minister the mercies of Christ. Christ is in them for He has called them and given them to the Church. Christ cares for the Church through them. They must be esteemed, then, for Christ’s sake.

That implies a serious calling for the officebearers. They must remember that they are solely responsible to Jesus Christ in all their work. They must not be men-pleasers. They, as the servants of Christ, must come to the congregation only with the Word of God. They preach, rule, and minister the mercy of Christ only with the Word of God. And, they must ever bear in mind that the people with whom they deal are the precious, blood-bought sheep of Christ. They must take great care how they handle them. As the servants of Christ, the officebearers are not the lords but the servants of the flock of God. 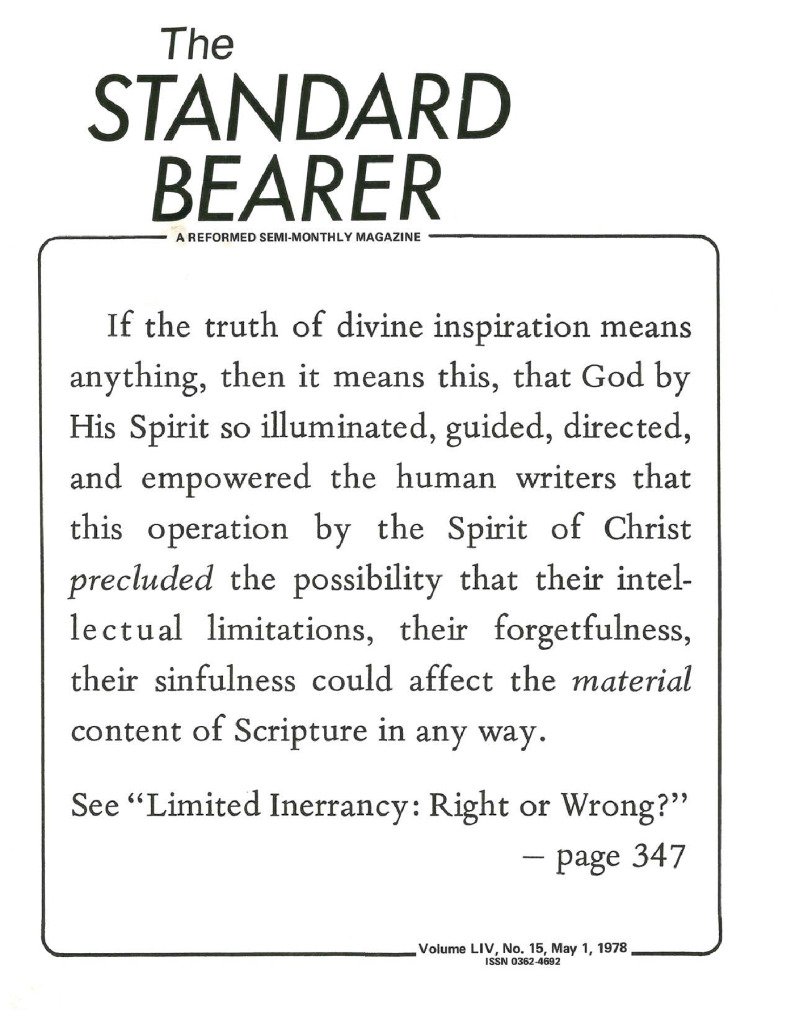