“And thou shalt make two cherubims of gold; of beaten work shalt thou make them, at the ends of the mercy seat. . . and there I will meet with thee from above the mercy-seat, from between the cherubim which are upon the ark of the testimony, of all things which I will give thee in commandment unto the children of Israel. Exodus 25:18, 22

We will now consider the place of the cherubim in the Old Testament tabernacle as they overshadow the mercy-seat of God’s ark.

We find it to be an interesting and profitable study to consider the office of these angels in the most holy place of God.

It is strikingly evident that these two cherubim are most interestedly attentive to the mystery of the mercy-seat in the temple of God. These heavenly spirits are interested in the’ hope of heaven and earth and in the fulfillment of all the Scriptures. However, two matters they do not yet understand. They do not understand really anything more than what God has revealed to the church through the prophetic Word. In the New Testament Scriptures we are told two matters which we must constantly bear in mind when we seek to understand the office of the angels of heaven in general, and more particularly concerning the liturgical service of these cherubim. Firstly, we must not forget that these cherubim figures themselves are part and parcel of the types and shadows concerning good things to come in Christ Jesus. These figures symbolize the attitude, the waiting attitude of the heavenly cherubim before the throne of God in heaven. We must remember that Jesus Christ had not yet suffered and died; that he was not yet ascended into heaven to sit on the right hand of the majesty of God. Hence, all the angel-world must wait. There is much that they do not yet know. Hence we read in I Peter 1:10-12, concerning the prophetic labors of all the prophets, that there is one central interest in all their strivings and searchings as they are moved by the Holy Spirit, to wit, the sufferings to come upon Christ and, the glory to follow. Secondly, we must remember that Paul tells us that he has received revelation concerning these mysteries “which in other generations where not made known to the sons of men” (Ephesians 3:1-13). Yes, God hid these things from men till the time of Paul and the apostles, “to the intent that now unto the principalities and powers in heavenly places might be known by the church the manifold wisdom of God” (Ephesians 3:10).

Whereas the cherubim also belong to these principalities and powers, they could not know much of these mysteries even in the very heavens. Were these things not such that they were “hid in God?” God did not disclose these matters to the cherubim in heaven directly and immediately; He revealed these matters by the prophets in the Old Testament Scriptures, and finally in His only begotten Son, when the gospel-promise was fulfilled. And this promise was fulfilled in the death and resurrection of Jesus Christ. Was he not delivered for our offenses and raised up for our justification (Romans 4:25)?

This resurrection from the dead is the hope of Israel!

It is the hope of heaven and earth, the reuniting of all things in heaven and on earth in Jesus Christ (Ephesians 1:9, 10).

Centrally that hope is God dwelling with His people in covenant mercy as the Jehovah who is on the throne between the cherubim in the very heavens.

It is a very strange phenomenon that these very evident truths of the Scriptures are often so little understood, and more often seemingly deliberately distorted.

There is the error of dispensational premillennialism. This view cannot but fail to understand the great truth of the gospel-promise as first of all revealed by God himself in paradise, and afterwards proclaimed by the patriarchs and prophets, and as typified and foreshadowed in the types and shadows, and as finally fulfilled in Gods only begotten Son on the cross, and in His resurrection and ascension!

We will not understand the instruction of God to Moses to place two cherubim on either end of the ark, facing each other and looking down upon the mercy-seat, unless we understand the import of the mercy-seat. The Hebrew term for mercy-seat isCaporeth. The term really comes from the verbCapor: to cover. This verb means: to atone, to make amends, to purge away, to cleanse from the guilt of sin. It expresses that the covering is “very much”. It is the complete and perfect covering for sins.

It was at given times that the high priests came into the most holy place to bring this atonement for sins. In Leviticus 16 we have recorded the divine instructions concerning the great Day of Atonement. It was then that the blood of the sacrificial victim had to be sprinkled also on the mercy-seat. It was the place where God accepted the sacrifice as the expiation of guilt and corruption of sin. And the cherubim looked on. We believe that the very angels in heaven were gazing down in rapt attention. And this attentiveness of the heavenly cherubim, surrounding the throne of grace and glory was symbolized in the two cherubim upon the mercy-seat.

And something wonderful took place here in the presence of the very angels! Jehovah was there! He accepted the covenant sacrifice as referring to Christ’s certain bringing of the sacrifice on the cross. And all Israel shall go forth from death into life. Then shall the church draw nigh into the fullness of salvation. For here, while angels beheld in rapt attention, they saw a picture of a better testament of which Christ is a surety (Hebrews 7:22). Yes, there were no attendant priests in all the tabernacle while atonement was being made for the tent of meeting, and for the altar, and for the priests, and for all the assembly (Leviticus 16:17). But here in this blood there is the promise of the Christ. He has become the surety of a better testament in His blood. Within this worldly temple (cosmic) is a parabolic way that hope of heaven and earth was enacted. The handwriting which is against us is removed in a typical way. All is very dim. It stimulates the sanctified interest of angels in the very heavens. And the cherubim keep their vigilant watch. Truly this is a solemn hour. No man stands with Christ in the darkness of Calvary near the cross. It is shrouded in the darkness of God’s mysterious doings when the Lamb of God dies.

And he has become the surety of the better covenant.

But all the angels knew that this transaction in the Old Testament temple was not the blotting out of the sin and guilt of man at all. The saints returned without having their consciences cleansed from sin, except that they looked at the fulfillment to come when the Messiah would come (Hebrews 10:1-18). The very devils in hell knew that this typical blood was not sufficient (Revelation 12:7-9). And they join in hellish accord with the Accuser of the brethren, who accuses the saints day and night before our God (Revelation 12:10). Did not Satan accuse even the Old Testament high priest of having filthy high priestly garments (Zechariah 3:1-5)? Surely the cherubim angels must have been cognizant of the imperfection of the atonement which was enacted in their presence in the Most Holy Place where the ark of the testament was placed, as representing the throne of grace and mercy.

Yes, these cherubim waited with bated breath, yet earnest expectation. They stooped to look into the things to come. They waited for the time when there would be a better temple, with a better sacrifice, and a better high priest, based upon better promises (Hebrews 8:6).

When the holy place was defiled by the priests, when no sacrifices were brought, when the temple ordinances were not kept, and there were no signs of better things to come pointing toward Christ, then the cherubim, too, as keepers of the holy place exercised their sacred angelic office to drive out the transgressors from the temple. And when the ark was removed from Shiloh, the cherubic figures also left. The Lord was still enthroned upon the ark between the cherubim, even in the house of Dagon in the land of the Philistines at Ashdod. Here too the glory of the cherubim exerted itself. God is indeed a God of all the earth; He is exalted on his holy throne amid the cherubim. And none could touch the ark with impunity, be he Philistine or a disobedient Israelite (I Samuel 5:6 ff; I Samuel 6:9, 19 ff).

Yes, when the ark left the tabernacle in the holy place, then the glory of Jehovah departed from this place in Shiloh. For the glory was departed from the tabernacle as well as from the high priesthood in Eli’s generations forever. Nevermore will the glory return to Shiloh. Truly this was well expressed in the dying words of Phinehas’ wife. Her son must be a walking testimony in Israel of the judgment of God upon Eli’s house. His name is Ichabod!

However, even here the truth is still expressed by Samuel when he set up a stone between Shen and Mizpah: Eben-haezer, hitherto has the LORD helped us. The changeless, faithful covenant God will surely fulfill His promised mercies. He will bring the ark later, some forty years later, into the city of the great king. The ark will be brought up with great festivity by David and all Israel (II Samuel 6:20 ff). And there will the ark rest in Jerusalem till the time of the Babylonian captivity. It will be placed in the beautiful temple of Solomon. There the figures of the cherubim shall beautify the temple too. And they shall once more be the symbol of the glory of God upon the mercy-seat (II Kings 19:15; I Chronicles 13:15, 28:18; II Chronicles 3:7 ff).

However, the abiding place of the Ark shall not be forever in the Old Testament temple. The glory will depart from this temple, never to return in this typical, symbolical way. The figures will be removed to give place for the abiding presence of the living cherubic creatures.

We have noticed that the way into the earthly tree of life was forever shut off for any return by man. That was the flaming sword which went every way. But when the real living Tree of life will come, then shall the way be no more closed. It will be that all who are the redeemed shall have free access to the throne of grace. For the great High Priest, who will shed his blood of atonement, will then enter into the holy place before us; he will be the great forerunner. He is Jesus, Jehovah, Who saves his people from their sins.

When he is born, then shall all the angels worship him upon the bidding of God (Hebrews 1:6).

The cherubim upon the mercy-seat will then not need to wait long for the fulfillment of the promise that the king of glory shall enter.

He is the King of glory, throned above the cherubim. 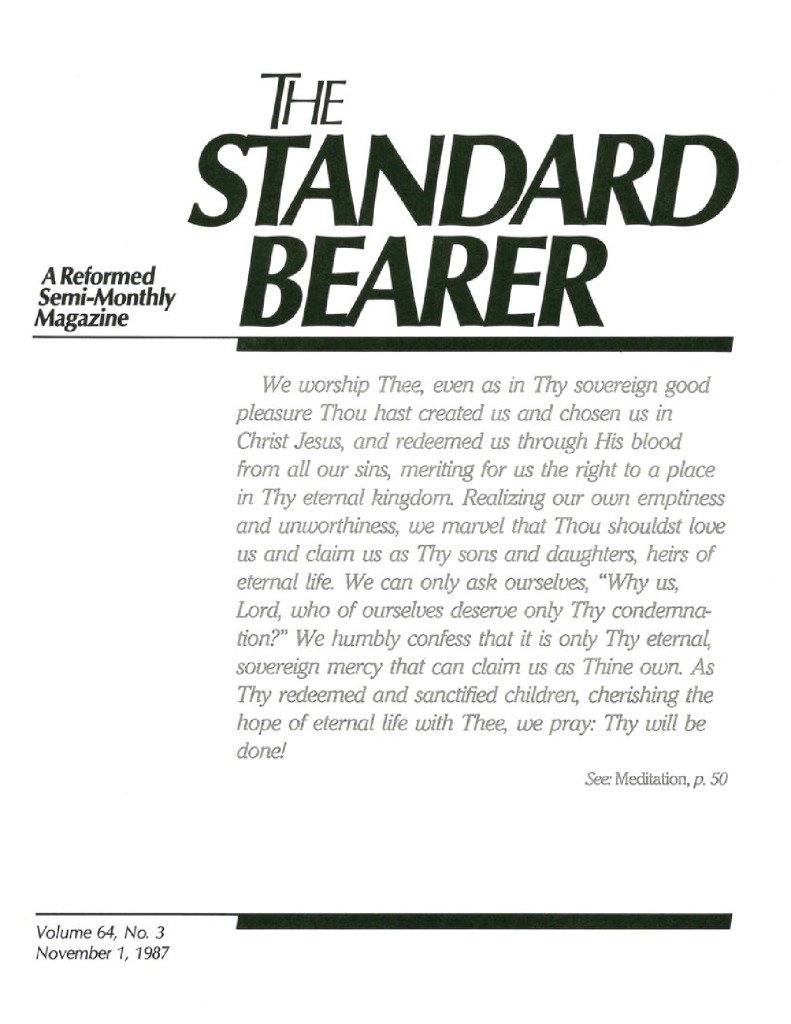